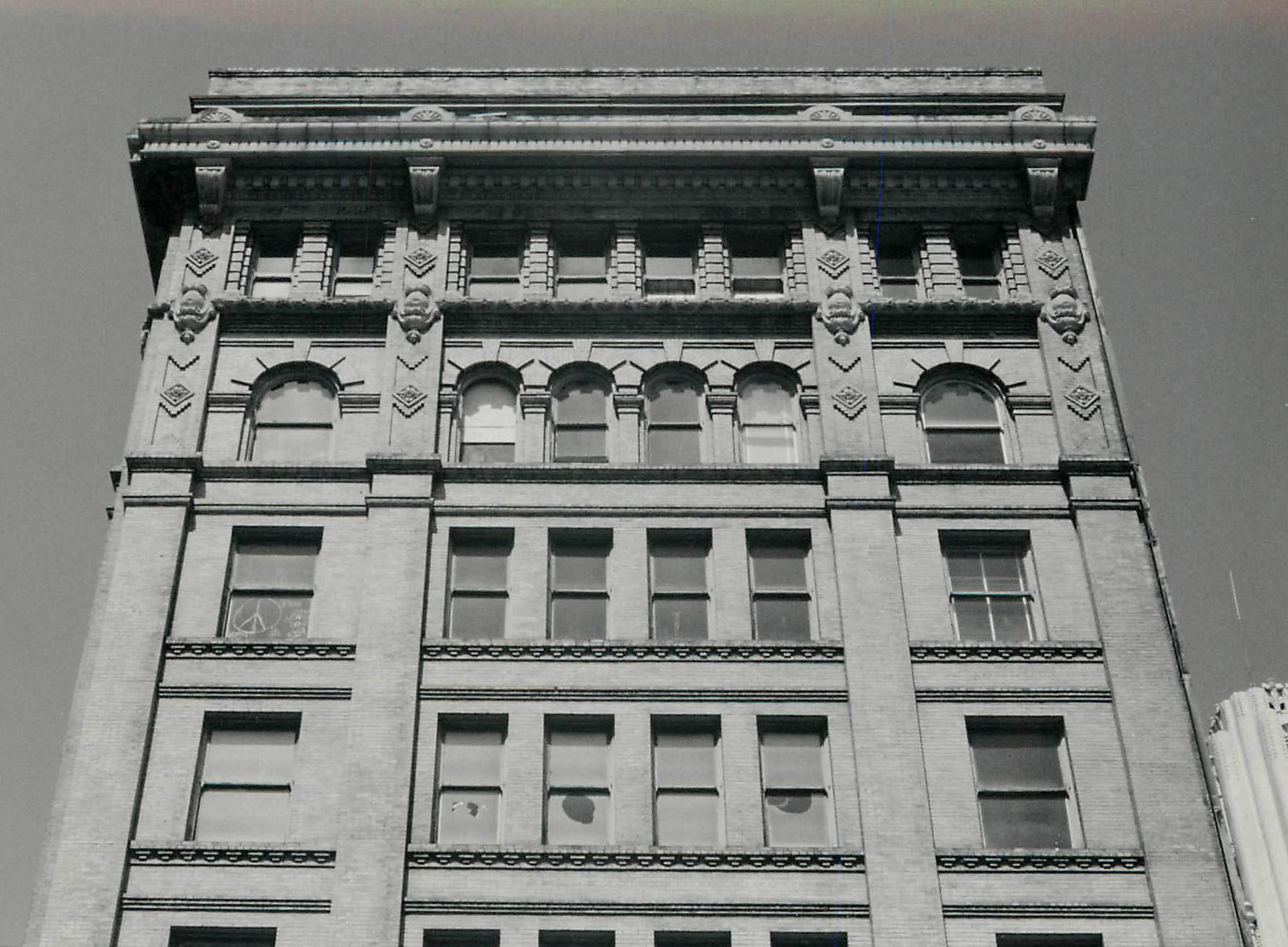 View up at the Williams Building on the southeast corner of 3rd and Mission Streets in 1994. (Photo by David Bricker.)

“Fundamentally, the organization saves buildings, and that’s why I continue to be attracted to it.” — the late preservationist Alice Ross Carey explaining why she supported San Francisco Heritage.

In November 1989, the San Francisco Redevelopment Agency (SFRA) was ready to give up on the Williams Building, but Heritage wasn’t.

Six years earlier, the agency had entered into an agreement with the federal Advisory Council on Historic Preservation to rehabilitate 693–697 Mission Street on the southeast corner of 3rd and Mission Streets. The Williams Building, an eight-story commercial structure designed by architect Clinton Day, was one of the last historic buildings in the Yerba Buena urban renewal area, “notable for its elegant proportions, finely detailed Renaissance/Baroque ornamentation and high quality masonry work.”1 In return for access to federal funding, SFRA had promised to preserve the 1907 building and ensure its restoration met the Secretary of the Interior standards for the treatment of historic properties.

Based on a report from its private structural engineer, the Redevelopment Agency announced that the Williams Building was compromised, unsafe, and might have to be demolished. The entire Yerba Buena project was moving at a snail’s pace (planning had begun in 1953) and the chance that the agency-owned building would sit ignored for at least five more years likely factored into the SFRA’s decision-making. Demolition was a quick solution.

Heritage had already fought off the destruction of the Williams Building in the 1970s, winning a compromise between the city, state, and federal government that created the agreement giving SFRA access to federal funds for preservation. Now, Heritage again stepped in, supported by specialists at the Federal Emergency Management Agency (FEMA) and the State Office of Historic Preservation to dispute the agency’s assessment and line up an outside structural engineer to evaluate the Williams Building.2

In October 1993, after four years of negotiation and despite available FEMA grants for rehabilitation, the Redevelopment Agency applied for and was granted a demolition permit for the Williams Building. Heritage immediately appealed the permit.3

FEMA offered $6.8 million to cover the cost of repair and renovation, but in response the Redevelopment Agency proposed spending just $1.5 million of the grant to stabilize the Williams Building and use the balance to address other needs in the Yerba Buena area. In essence, SFRA was hoping to push the costs to a future developer interested in the site. Heritage again protested, concerned that delays and a lack of firm commitment would further imperil the deteriorating structure and that the structural work proposed by the agency would compromise its historic integrity.4

The Williams Building seemed doomed to crumble from neglect as the stand-off continued. Then finally, after decades of plans, razed landscapes, chained-link fences, and bureaucratic paralysis, the Yerba Buena redevelopment area finally began to come alive. Yerba Buena Gardens and the Martin Luther King Jr. Memorial were unveiled to overwhelming enthusiasm (those of us who lived in the city remember how transformative that oasis of park and water felt at the time). The San Francisco Museum of Modern Art opened its instantly iconic new home across the street a little more than a year later in 1995. Suddenly, the corner of 3rd and Mission, right in the heart of this new cultural center, became a very tasty morsel for developers.

The San Francisco Redevelopment Agency issued a Request for Qualifications for a project encompassing the Williams Building and an L-shaped lot behind it in September 1995. Four developers responded, with two making firm commitments to preserve the Williams Building. Heritage reviewed and found those two proposals acceptable.5 The winning project finished construction almost a decade later in 2004. The 42-story St. Regis San Francisco condominium and hotel tower rises up at the rear of the property while a seismically stabilized and renovated Williams Building still commands the corner it has since 1907.

Saving the Williams Building took almost three decades of advocacy by Heritage and illustrates how important having a strong preservation organization able to fight battles for years is for protecting San Francisco’s historic buildings and landscapes.

Update: Lyon-Martin House on Track to Become a Local Landmark