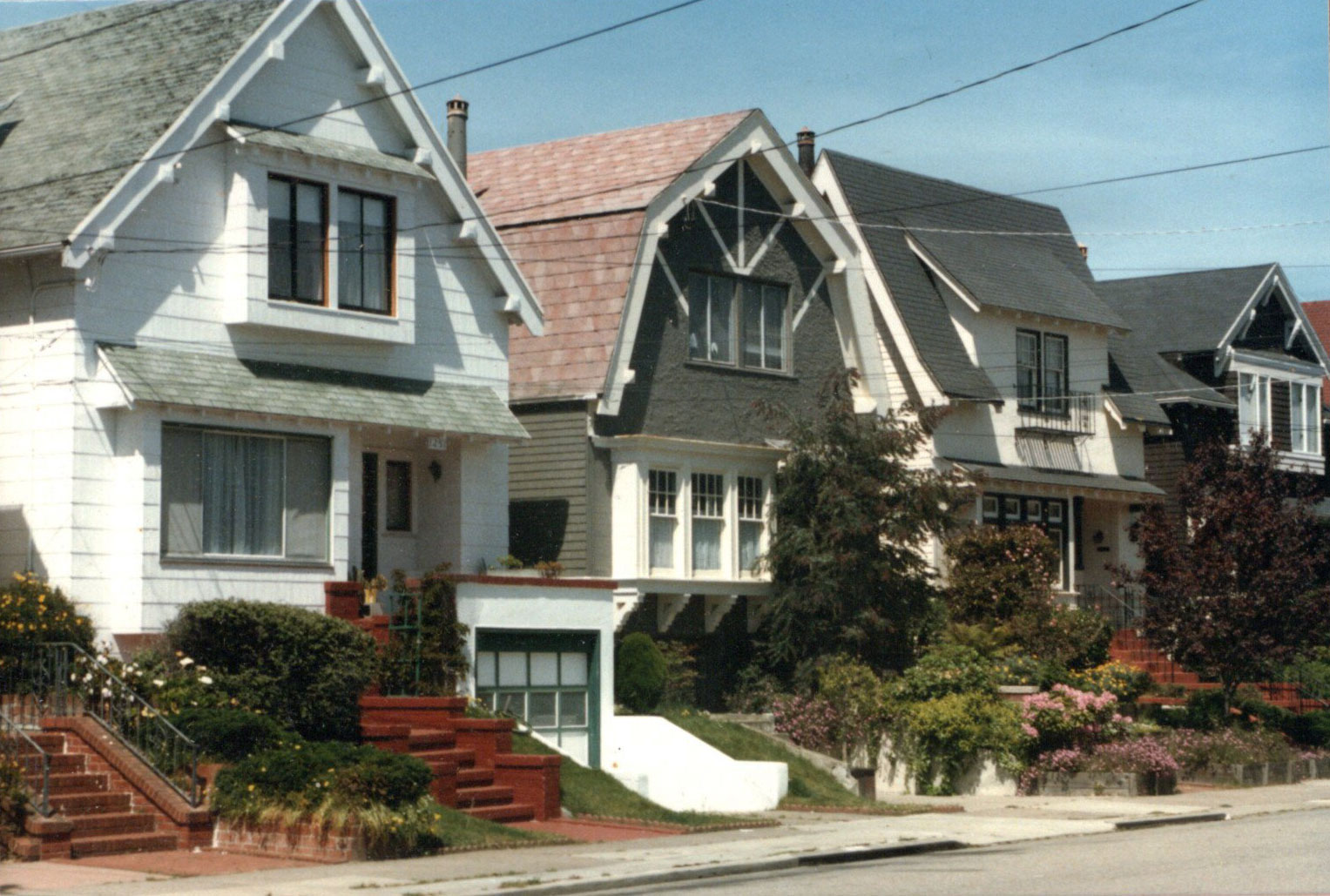 San Francisco’s Outer Sunset District has gone through many changes since it was first settled by Europeans. From a no-man’s land of blowing sand dunes to the riotous Carville at the Beach, to the Outside Lands, Oceanside, and then just plain Outer Sunset, each stage has produced its own architecture and ambiance. One striking section that survives from the early 1900s is the row of 15 Craftsman houses on 42nd Avenue between Lincoln Way and Irving Street.

In 1892, a San Francisco contractor named Alphonso Harrington moved his business to the sand dunes of the Outer Sunset. Not many people were out there, but there was plenty of land to build on. Harrington focused on mostly Craftsman style homes and built on speculation. After the 1906 earthquake many people moved away from the crowded—and fire-prone—downtown, and Harrington’s business started to expand.

Harrington decided the time was right to build an entire row of houses. He chose 42nd Avenue off of Lincoln Way (formerly H Street). A train and then a streetcar ran all the way out to Ocean Beach and stopped at 42nd Avenue. The Harrington homes were the first part of the development trend that would soon fill up the land between Lincoln Way and Judah Street, as the city started to grade the dunes and pave the avenues from the Inner Sunset out to Ocean Beach.

Taking the plunge, from 1910 to 1913, Harrington built 15 homes in a row using a combination of styles. The generous 30-foot-wide lots allowed for detached homes and large back yards for gardening and children to play in. At that time, the Craftsman, Mission Revival, Classical Revival, and Period Revival styles were all popular. Harrington chose distinct elements from each style and incorporated them into the buildings.1 He used old-growth redwood for the structures and then decorated the interiors with lath-and-plaster walls, beamed ceilings in the dining rooms, Craftsman brick fireplaces, and pressed tin for wainscoting. Many of these original details still exist in most of the homes.

An article in the 1913 San Francisco Chronicle said, “People who have bought new residences between Lincoln Way and Irving Street express themselves as delighted with their homes and the location. They have the city’s pleasure ground [Golden Gate Park] at home, and the invigorating climate is a source of constant surprise and pleasure, bringing improved health to the children and adults alike…”2

That quote from 1913 sounds like what I heard from my soon-to-be-neighbors, when my husband and I bought one of the homes back in 2009. Praise for the houses, the neighborhood feeling, and the large backyards were all part of what the neighbors shared with us.

The resident families value the generous backyards, play space for children and luxuriant urban habitat for birds and other wildlife. Skunks, raccoons, and possum have all been sighted in the gardens. A number of homeowners have applied for and received Wildlife Habitat Certification from the National Wildlife Federation. Everyone enjoys the established trees, including a tree house in a grove of trees in one yard, mature pine trees in another, and a magnificent Monterey Cypress in a third. The trees not only provide cover and a home to the many birds who come over to our bird feeders from Golden Gate Park, they also effectively block the strong winds off of the ocean, making the outdoors comfortable for sitting even during the cool, foggy days of summer.

Property records show that people have lived here 20, 30, and even 40 years. People who move in grow to love the homes and stay here a long time. In 1992, one family was renting across the street and jumped at the chance to move in when one of the Harrington homes was made available.

According to another neighbor, Loretta Botta, “I moved into my cottage in 1984. This enchanted row of craftsman homes is very unusual for the Sunset. Those of us who love to garden display our front yards for all to enjoy including the wildlife who venture out at night. Many compliments come our way from neighbors, newcomers and tourists who discover the cozy charm of this special block. To date, we have three homes who have registered their gardens as Wildlife Habitats. So stop by, take a peek, and enjoy a quiet stroll on your way to Golden Gate Park.” 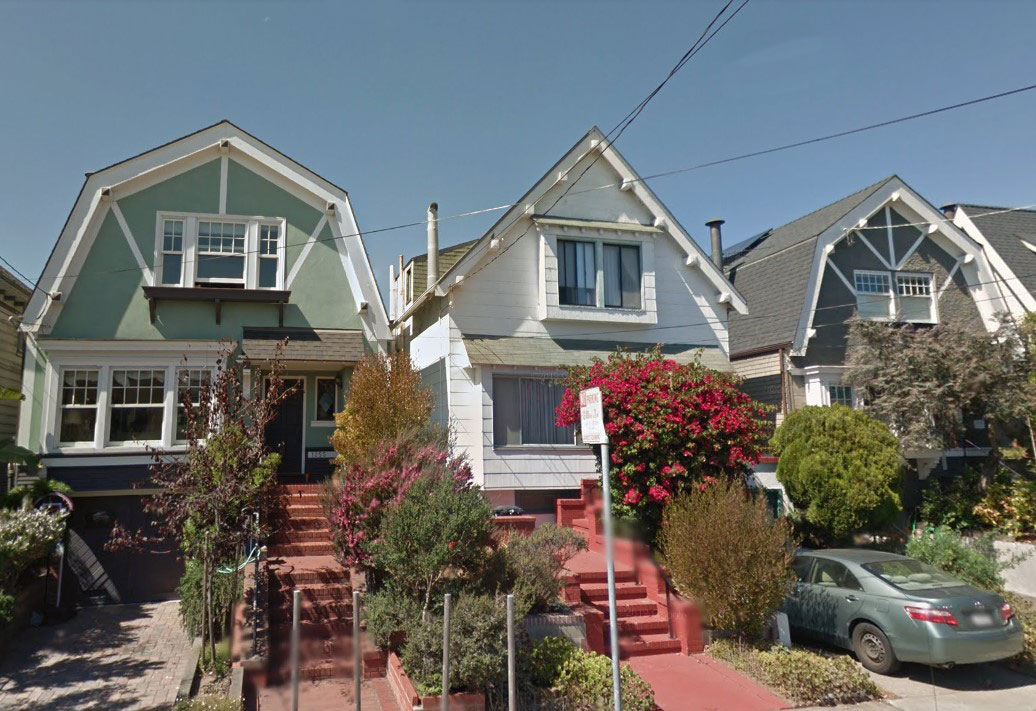 Next door to Loretta, Chris Mallia told me, “When my husband and I moved here in 1989 we knew right away that the neighborhood was very special. I am in a row of houses built in 1911, and consider it a privilege to own and maintain these very beautiful and well built homes from another era. I could describe them as charming, lovely, historic, cozy, with lots of personality and detail. And we have a unique feature of front gardens, which many of us enjoy. In fact, being out in front gardening has turned out to be a great social activity and allows us to chat with neighbors and meet new people as they move in. Our neighbors also are special and we’ve made many friendships throughout the years. We are happy to say we know most of our neighbors and that many of them share our love of these old houses and we do our best to keep the character and original charm as we continue to maintain them.” 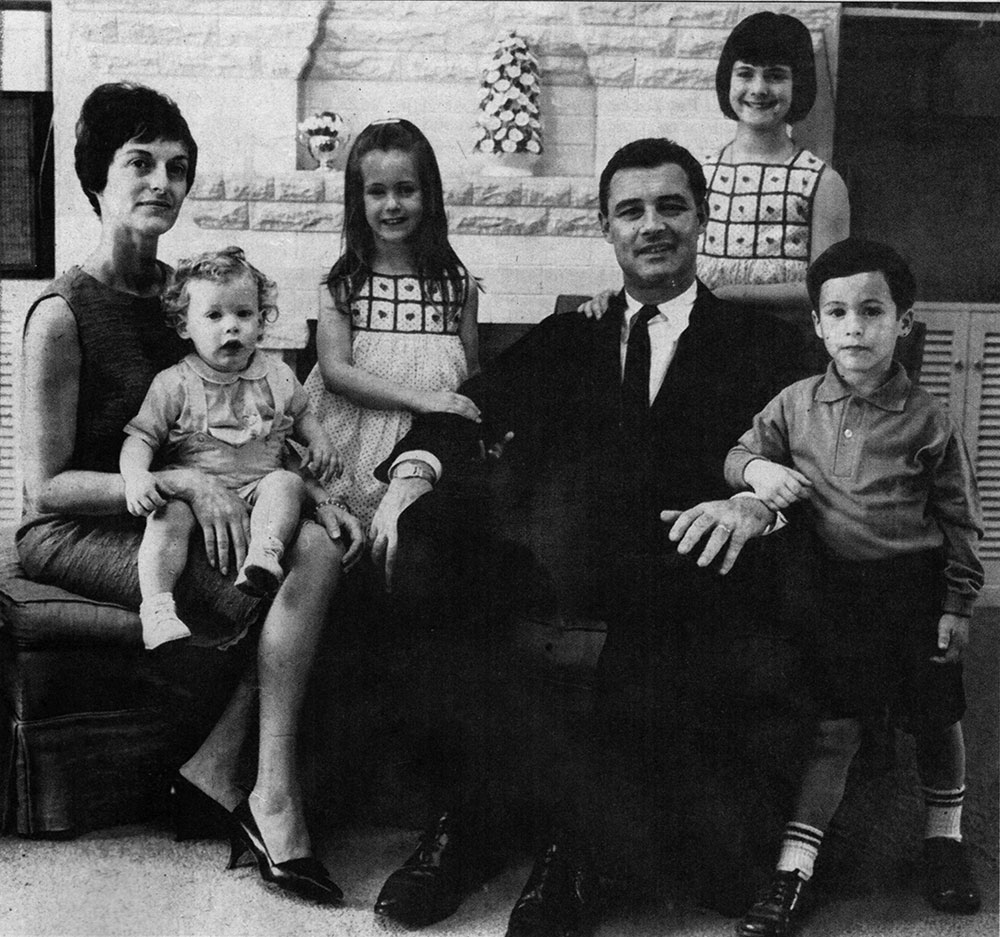 The neighborhood was planned as, and has mostly stayed as, working class. However, even this block has its share of history. George Moscone lived at 1239 42nd Avenue in the years before he became mayor, from 1962 to 1966. While living there, he was elected to the Board of Supervisors in 1963, and became a State Senator in 1966.3 A photo shows him and his family in front of the craftsman fireplace. Most recently, Jim Suekama, an architect, and Mary Ann Miller, a San Francisco planner, moved there in 1976 until their passing last year. After we had moved in next door, I was awakened one Sunday morning by a racket in their driveway. I was concerned that my new neighborhood might not be ideal, but when I went to investigate, I found a group of neighbors and visitors performing the traditional rice mochi pounding ceremony—part of Jim’s Japanese traditions that brought friends and relatives from all over the Bay Area. Their recent deaths are a loss to the close-knit neighborhood. During the recent estate sale, many visitors admired the house and expressed the hope that it would be preserved. Our neighbors are looking forward to finding a new resident who shares their love of historic buildings and neighborhood camaraderie.

Love of these houses is prompting the neighbors to discuss applying for a Historic District designation. An architectural survey of the neighborhood noted that the row of houses qualified: “[T]he potential Alphonso Harrington 42nd Avenue District appears eligible for listing in the California Register under Criterion 3 (Design/Construction) on the basis of its significance as an early, highly intact, row of Craftsman-style houses built in the Oceanside neighborhood for middle-class residents on the eve of World War I. […] In regard to their plan, massing, scale, and style, these three-story Craftsman row houses more closely resemble contemporary single-family and multiple-family housing being erected around the same time in the East Bay suburbs.”4

It is a miracle that these houses still stand today, forming a row of remarkable homes that reflect the joy of craftsmanship and careful detail of that time. Harrington created not only a row of houses but also a neighborhood. These homes are a precious historical resource, and we are looking forward to them being around for the next 100 years, so that others can enjoy them.

Katherine Howard is a recent (2009) resident of this block. When she isn’t in her garden, she also writes a column on the environment for the Westside Observer and the Castro Courier.