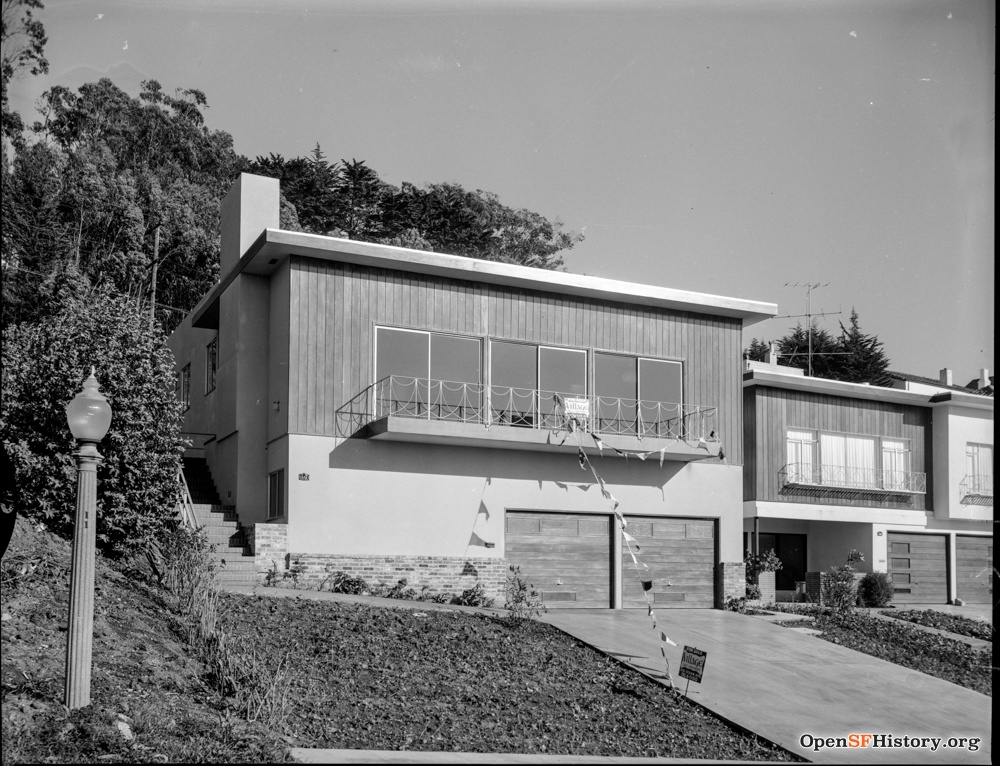 Willie Mays’ home, November 1957. 175 Miraloma Drive. The sale of this house was refused to Giants baseball player Willie Mays by then owner Walter A. Gneadiloff, who cited neighborhood pressure against the sale.

This piece is excerpted from the October-December 2020 issue of Heritage News. Find the original here.

In 2013, with a grant from San Francisco’s Historic Preservation Fund, the Planning Department commissioned the first-ever African-American Citywide Historic Context Statement. A context statement is the foundation of preservation planning: it describes the broad patterns of historical development of a community or region that are represented by the physical development and character of the built environment. Although frequently based on property types or architectural styles, San Francisco context statements have increasingly focused on the physical and intangible heritage of specific cultural or ethnic groups. When it comes to recognition, education, and advocacy, context statements are of tremendous value. They inform and guide neighborhood survey work, landmark designations, and treatment standards for historic properties. 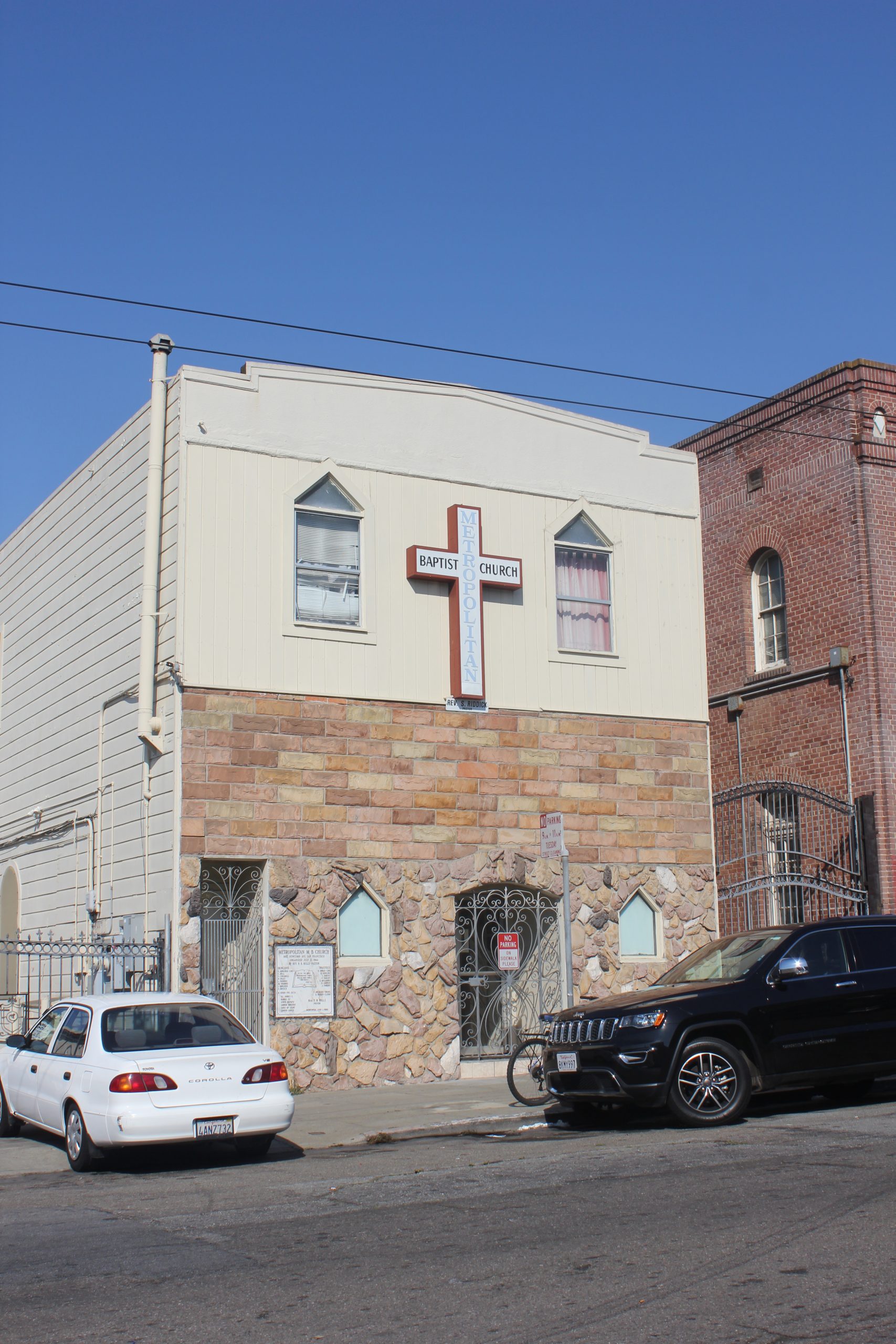 Metropolitan Baptist Church, at 1682 Newcomb Avenue. The area along and adjacent to the Third Street corridor in the Bayview features one of the densest concentration of churches in San Francisco, including a number of storefront churches.

Since its emergence as a field of work and study in the late 1960s, historic preservation has given scant attention to sites associated with African-American history. Residences, businesses, churches, and neighborhoods significant to Black culture were not the subject of architectural surveys or conservation work. At the canonized national landmark plantations of George Washington, James Madison, and Thomas Jefferson, Black lives integral to historical significance were pushed to the margins or even off the page.

Recently there have been incremental efforts to address this ignorance and injustice. The motivation for commissioning a San Francisco African-American context statement was to provide a tool to recognize and preserve sites associated with a community that has been fundamental to the city’s history and development, especially in the second half of the twentieth century. Since work on the context statement began, in 2013, seven city landmarks associated with African-Americans have been adopted.

Despite such progress, the African-American context statement is still considered unfinished. A tenet of context statements is that they are “living documents,” changeable and subject to additions as new information comes to light or as significance changes through time. In reality, the funding and effort needed to create these weighty documents (which in recent years have ballooned to hundreds of pages) means that just getting a statement adopted can itself be a monumental challenge.

One of seven local landmarks associated with African-Americans is San Francisco Landmark No. 213, the Cecil F. Poole House, designed by Joseph Leonard. The Poole family were the first African-Americans to live in Ingleside Terraces. On June 5, 1958, Charlotte and Cecil Poole found a cross burned on their front lawn. The family resided there until 1982. 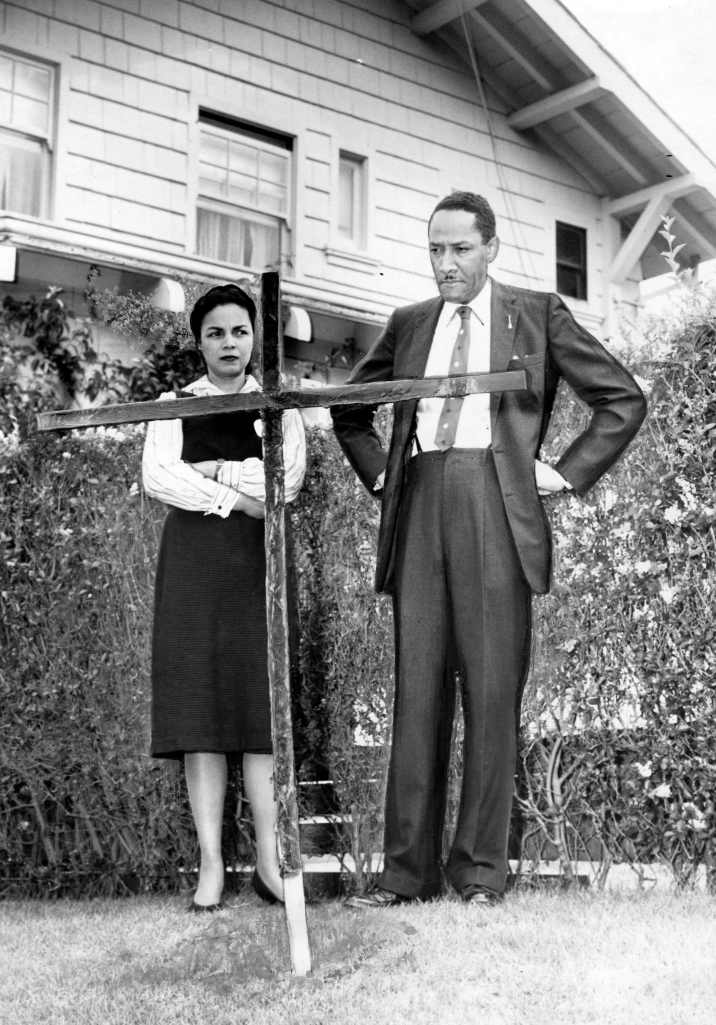 “The African American Citywide Historic Context Statement” was prepared for the City and County of San Francisco by Tim Kelley Consulting, The Alfred Williams Consultancy, VerPlanck Historic Preservation Consulting, and staff at the San Francisco Planning Department, and is online at https://sfplanning.org/african-americanhistoric-context-statement. After requests for edits, more outreach, and the inclusion of more voices, Planning Department staff has tried to address community concerns with revisions to the 2016 document and is preparing to engage in renewed public outreach once Covid restrictions on gatherings ease.

Even as a draft, the 296-page document reveals details on individuals, institutions, and sites important to San Francisco history, identifying dozens of potential landmarks associated with the city’s African-American community.

African-Americans influenced and shaped the city before it was a city, and are woven into every San Francisco milestone, event, and era. William Leidesdorff, the son of a Danish father and a mother of mixed African and Carib ancestry, stood as the leading citizen of the pueblo of Yerba Buena before it became the boomtown of San Francisco. A part of Chinatown served as the main Black neighborhood in the city’s first few decades and seminal Black churches stood in North Beach and on the slopes of Nob Hill.

A surge in African-American migration to the city, drawn by World War II shipyard work, fueled a culturally rich “Harlem of the West” in the Fillmore. In the 1950s and 1960s, Black judges, doctors, and city supervisors  integrated west-side enclaves while a robust African-American middleclass buoyed by well-paying government and waterfront service jobs, gave the Bayview District one of the highest home-ownership rates in the city. By the early 1970s, San Francisco’s Black population hit a high water mark of more than 13% of the city’s population, and the community’s political influence rose with appointments and elections of African-Americans as city commissioners, supervisors, and, in 1996, Willie Brown as mayor of San Francisco.

The homes of some of these prominent African-Americans are city landmarks or identified in the context statement as landmark candidates, significant not only for their association with the individuals, but also for representing important milestones in the struggle for racial integration in the city. The Leonard-Poole House at 90 Cedro Way, City Landmark #213, falls into this category. Cecil Poole, serving as assistant district attorney in San Francisco, was the first minority homebuyer in Ingleside Terraces. Shortly after his family moved in, a cross was burned on the front lawn.

Willie Mays, one of the top five baseball players of all time, tried to buy a home in Sherwood Forest and despite his popularity and fame was turned down for being Black. Mays was only able to purchase the house after the intervention of Mayor George Christopher. The west-side houses of trailblazing supervisor Terry Francois (1608 10th Avenue) and newspaper publisher Dr. Carlton B. Goodlett (579 Los Palmos Drive) are other significant examples of potential landmarks.

Many sites associated with the city’s African-American history documented in the draft context statement are “not extant.” William Leidesdorff’s house and warehouses are long gone. The first Black churches in North Beach were lost in the 1906 earthquake and fire. Redevelopment killed the Harlem of the West, decimating hundreds of Black-owned businesses, disrupting and dislocating the community, and razing significant buildings. For half a century Bayview-Hunters Point has been subjected to pollution issues, spiking crime, deteriorated public housing, and ever-rising real-estate prices. The Black community is both leaving and being pushed out of the city. From 13% of the population in 1970, African-Americans will only comprise 3 to 4% of the city’s residents when the 2020 U.S. Census is finished.

Even “improvements” in the neighborhoods are seen by longtime African-American residents as not for them, but just another nudge to leave. Dr. Espanola Jackson alludes to this in the context statement, quoting locals connecting gentrification of the Bayview with the construction and landscaping on Third Street for the T-line streetcar: “For every palm tree, that mean a Black person gone.” 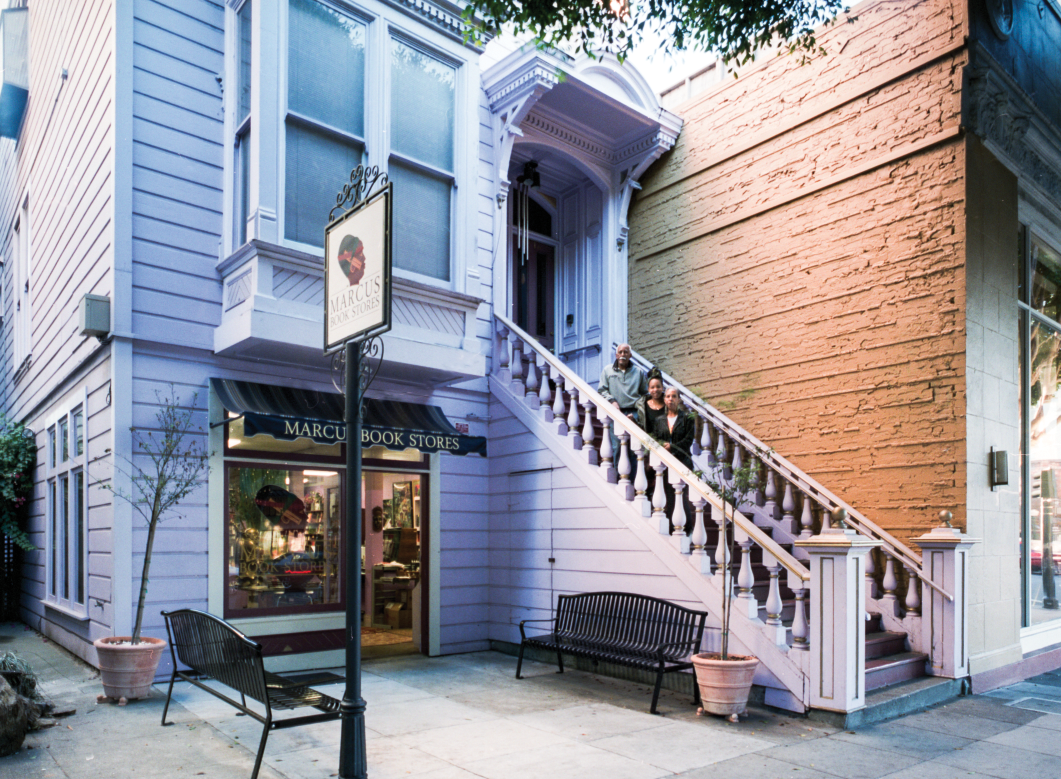 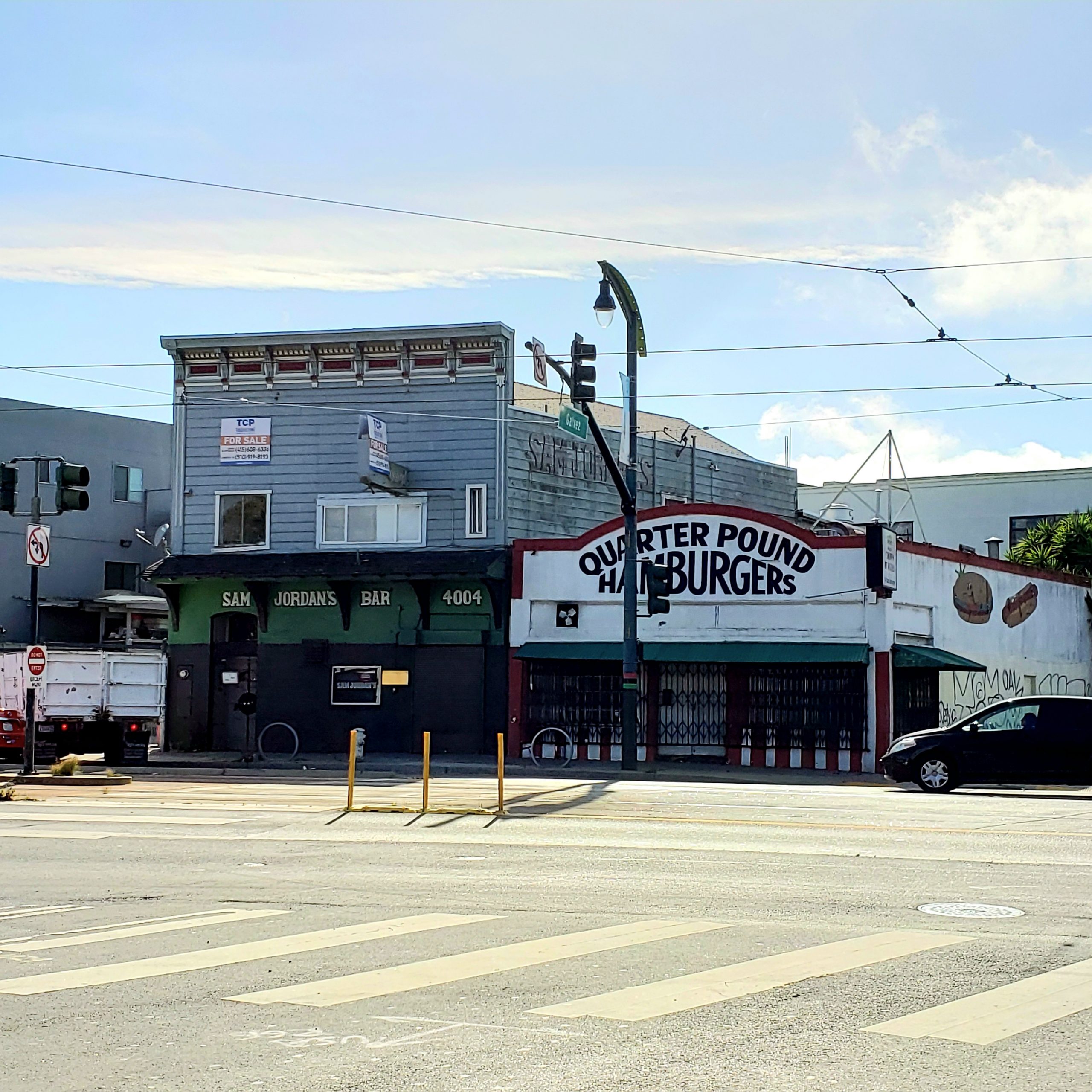 The needs of the living community are often not directly addressed or factored into traditional preservation work, and when considered, uncomfortable questions for the field arise. Is landmarking a church building relevant if the congregation that makes it significant is pushed out of the city? Is preservation too often only about recognition or commemoration, and if so, does the renaming of streets or schools do the same job, as when City Hall’s address was changed to 1 Dr. Carlton B. Goodlett Place or, more recently, when Willow Alley between Buchanan and Laguna Streets was renamed for Earl Gage, Jr., the city’s first Black firefighter? A city-organized advisory group is currently considering the renaming of many of the city’s public schools, and African-American names will likely be offered in replacement for some. Does the designation of a historic district or a city landmark or a context statement associated with Black history help the African-American community in any way?

To many in the preservation field and in Black communities, the answer to the last question is still yes. Carl Williams is an AfricanAmerican attorney and writer whose decades of service with several city agencies and participation in Black community affairs has immensely informed an understanding of the historical lineage of African-Americans in San Francisco. Formerly on the Board of Directors of the San Francisco African American Historical & Cultural Society, Williams served as its lead for revision and input on the most recent draft of the African-American context statement.

“The context statement makes—in my view—a potent and persuasive addition to the current national reckoning conversation regarding racial and social inequities. [It] provides a credible vehicle for identifying the multifarious institutional, social, and cultural forces that have shaped the African-American experience in San Francisco.”

Williams notes the context statement is referred to as a “milestone document” in the city’s recent resolution on equity (see page 8). “San Francisco can do its residents proud by adding this ‘milestone document’ to the arsenal in the struggle for racial and social equity.”