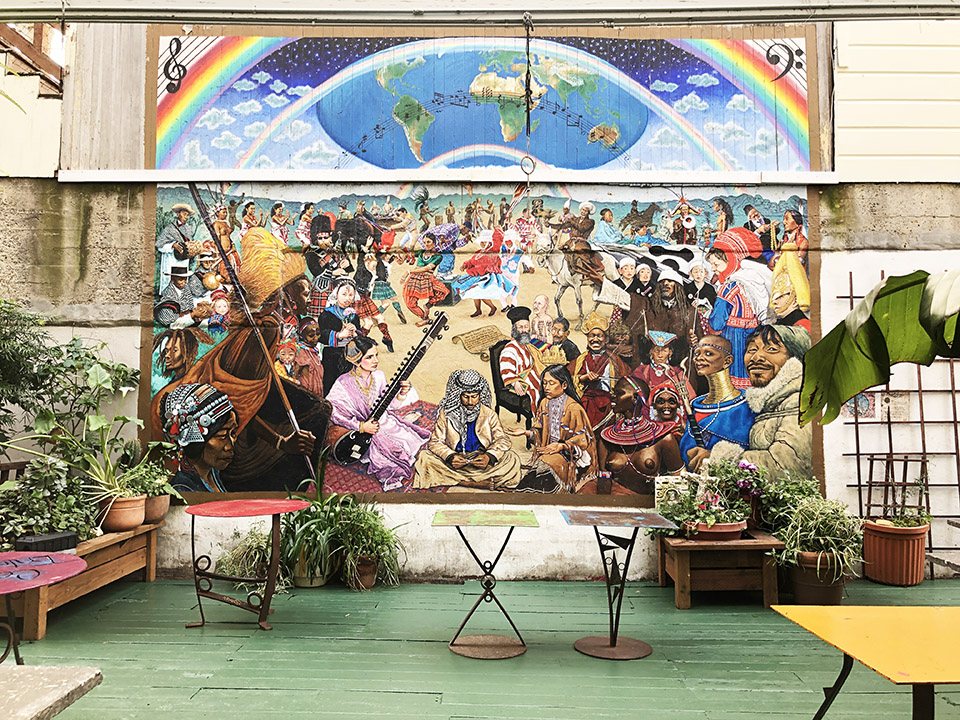 Mural in the outdoor dining area of San Francisco legacy business Cafe International, at 508 Haight Street, painted in 1994 by artist Kemit Amenophis. It shows that people can be united and experience peace through the magic of music. Teresa Hammerl.

This piece is excerpted from the October-December 2020 issue of Heritage News. Find the original here.

The field of preservation is undergoing profound changes. In the wake of the unjust murder of George Floyd on May 25, 2020, many in the preservation community are confronting issues of race and equity hiding in plain sight.

Historically, the preservation movement in the U.S. has primarily invested in maintaining White spaces, and, for much of American history, little was done to protect Black and other spaces historically significant to people of color. In San Francisco, less than 10% of the city’s landmarks are designated for their cultural associations with African-American, Asian and Pacific Islander, Latinx, or LGBTQ histories. Additionally, there is a lack of diversity and representation among professionals in the field, with African-Americans for example accounting for less than 1% of preservation practitioners. Finally, the preservation field, together with other cultural organizations, is grappling with issues surrounding labor equity, including disparities in compensation, advancement, and racism (both latent and overt). Together, these practices contribute to a culture of inequity that many in the field are now speaking openly about.

In a June 2020 blog for the National Trust’s Preservation Leadership Forum, architectural and urban historian Marisa Brown wrote of “Preservation’s Existential Crisis.” She acknowledged how today’s preservation movement needs a more complete, inclusive representation of communities across the nation, and that failing to respond to the broader social reckoning puts the field at risk of becoming obsolete. Brown stated the problem:

Preservation has been complicit in extending and valorizing white dominance. The federal, state, and local regulations that govern many of the most important preservation mechanisms reflect bias against communities of color. We don’t talk about displacement and gentrification nearly enough. We don’t spend enough time thinking about the many ways in which preservation is used by those outside of the field to advance their own aims (of nationalism, of white supremacy, of profit…). The field is too white, and community allyship is not prioritized.

Brown emphasized the need for preservation organizations and public commissions to think critically and publicly about how their work has supported white supremacy, and examine what their preservation work would look like if antiracism were central to their mission, rather than tertiary: “For every preservation organization and commission out there, an issue will arise that forces a choice between protecting historic buildings and sites and the work of antiracism. In other words, active participation in dismantling the systems and culture of white dominance and supremacy may require letting some places go.”

Recent notable examples of these types of choices include the removal of Confederate monuments across the country, and, locally, statues of Christopher Columbus on Telegraph Hill (by order of the mayor) and Junípero Serra in Golden Gate Park (by protesting citizens).

On July 15, 2020, San Francisco’s Historic Preservation Commission unanimously passed an expansive resolution on racial and social equity. Created by the Planning Department to provide a foundation for antiracist work in city planning and historic preservation, the resolution acknowledges violence inflicted on the Black community (and other communities of color) and calls for centering the city’s historic-preservation work and resources on racial and social equity.

Of the nearly 95,000 entries on the National Register of Historic Places, only 2% [focus] on the experience of Black Americans. Of the more than a $100 billion awarded from the Federal Historic Preservation Fund since 1968, the majority has benefited White Americans.

The resolution is an important public step at the city-level to advocate for more widespread change in policy and practice. 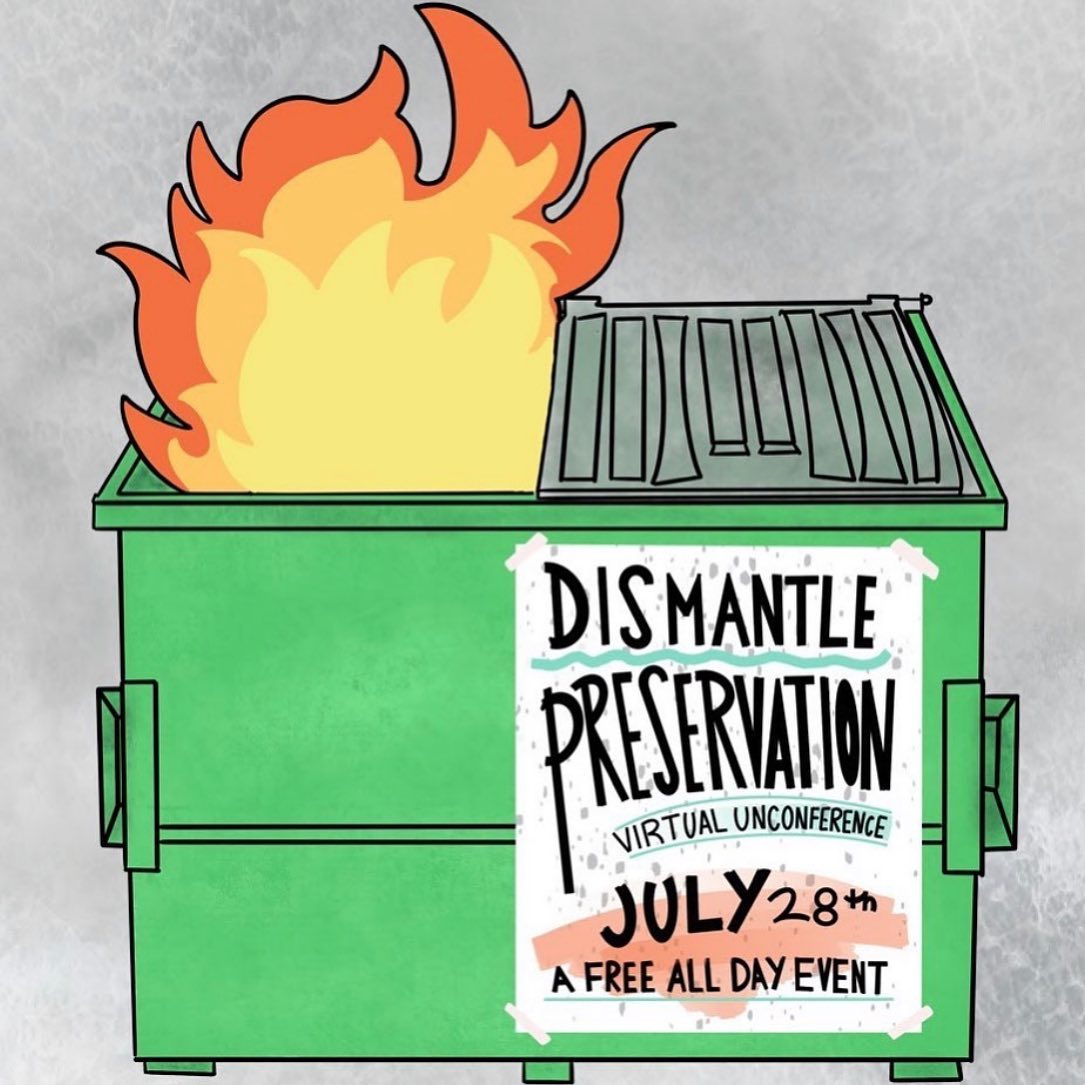 Likewise, young preservation professionals across the country are seizing this moment to highlight instances of racism and inequality perpetuated by their field, and organizing together on calls to action. For example, the free “unconference” #DismantlePreservation, organized by preservation activist Sarah Marsom and held virtually on July 28th, acknowledged that emerging preservationists need a different set of resources to advocate for themselves, and called for more inclusive stories of the past and the built environment. The one-day event was filled with topics that many young preservation professionals of all backgrounds expressed as necessary for their continuing education: pursuing inclusive workplaces, recognizing implicit bias in preservation, engaging broader communities.

One session, “Expanding the Preservation Narrative,” featured BIPOC (Black, Indigenous, and People of Color) preservationists discussing both the inspiring and challenging aspects in their work. In lightninground talks entitled “Burning Down the House,” a diverse group of preservation professionals led six-minute rapid-fire talks highlighting specific ways the preservation field can do better. For example, in “Architecture is both the tool and the result of settler colonialism,” Fernando Luiz Lara, Professor and Director of the PhD in Architecture program at the University of Texas, Austin, spoke of how the field needs to better recognize the value of people’s relationships to spaces, and how those values are fostered. In “Tell the Full Story: A Meditation on the Retelling of History,” Krista Whiters at American Institute of Architects (AIA) spoke to the importance of language when educating the public about historic sites related to slavery (e.g., instead of “where people were held in bondage,” say “where White people held Black people”).

Conversations on dismantling systems of oppression are happening not only within the preservation community but across the cultural-heritage field. Professionals in nonprofits, museums, and community history organizations are uniting virtually in “unconferences,” online forums, and social media, seeking ways to use their collective-bargaining power to make their fields more inclusive. In “Elevating Unpopular Opinions,” a follow-up event to #DismantlePreservation held on August 25th, women in the museum and preservation fields came together to discuss how they can work within and outside of existing constructs to promote change. Said Emma Turner-Trujillo, co-founder of Death to Museums, a monthly dialogue series that promotes solidarity and exchange among museum workers: “If working internally in your institution had any effect, we wouldn’t be discussing [how to promote change within your institution] right now. People would not turn to anonymous accounts like @changethemuseum [to share] ways that they’ve been wronged or bullied or hurt…these systems are working as they have been intended to work, so we must not work with them, we must dismantle them.” 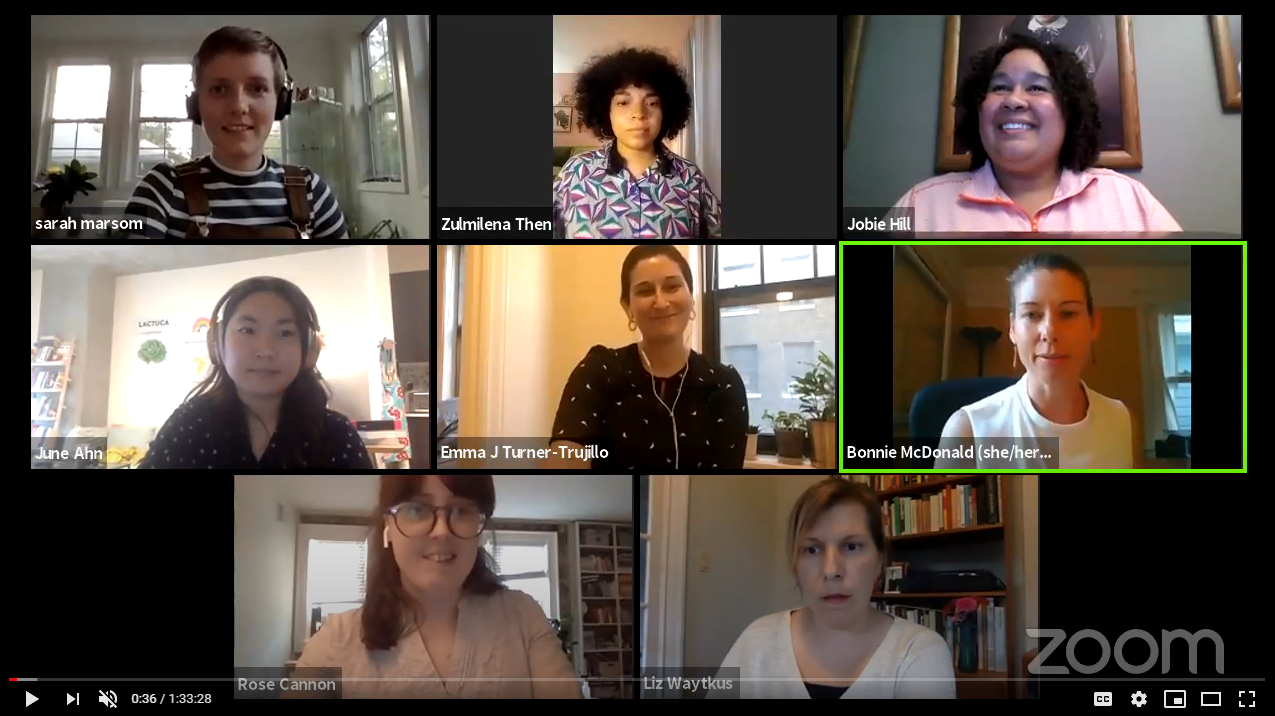 These virtual gatherings are sending a message: there is a community of like-minded people fighting for the same changes within (and outside) their institutions and in the cultural-heritage field.

The #DismantlePreservation discussions and the San Francisco Historic Preservation Commission’s resolution for racial and social equity are important first steps in acknowledging inequality in historic preservation. But what comes next? When asked how she wants the conversations in #DismantlePreservation to continue, Marsom said: “What I’m hoping is that people start to assess what they are currently doing without thinking that they need to reinvent the wheel. People can institute change within the larger constructs. For example, for the National Register [of Historic Places], maybe you need to do more recent-past history to start making it more inclusive….we need to start this internal reflection, and analyze how our current work can change. We need to realize that we can’t use the same tools we’ve been using from 1966.”

In San Francisco, for example, allowing more-recent history to contribute to a property’s significance would strengthen the case for designation of Black-led radio station KPOO (89.5), located at 1329 Divisadero Street, which in the 1970s became the first radio station in the Bay Area to play rap, reggae, and salsa music.

Bonnie McDonald, President & CEO of Landmarks Illinois, tackled problems related to labor equity in “Elevating Unpopular Opinions,” one of the major calls-to-action for #DismantlePreservation: How can we create a pipeline for traditionally marginalized groups to enter preservation? “Number one for me is to be self-reflective, evaluate YOURSELF…What values do you express? What practices to do you have?…We can talk about hiring practices. We take the school of life as an very important educator, so not everyone has to have a four year degree to do an amazing job for you. We post our salaries [rather than] ask people to share their last salary and base it on that.”

Locally, Heritage seeks to introduce paid fellowship and internship positions, possibly in partnership with the Planning Department, in which diverse candidates receive on-the-job training and experience in the field of preservation.

While the field confronts its own complicity in structural racism, it seems there is a collective will for something better. Change will only happen with hard work. Heritage is committed to being a constructive partner in the fight against racial and social injustice. As we move into our 50th year, we are committed to telling the full story. Jobie Hill, founder of Saving Slave Houses, said it best: “Talk is cheap…We know you can put together a statement that sounds nice, but just do it, and THEN we can talk about it later.”

Beginning next issue, Heritage News will have an ongoing dedicated section focused on preservation and equity, featuring diverse voices from outside Heritage and reports on our commitments to racial and social equity. To begin acting instead of talking, we have to engage with preservation’s diverse community. We admit that this will take time, and that we cannot tackle issues of racial and social equity alone. We invite diverse perspectives and provide this dedicated space to share the places and issues that are important to all communities who have a stake in preserving San Francisco’s cultural and architectural heritage.