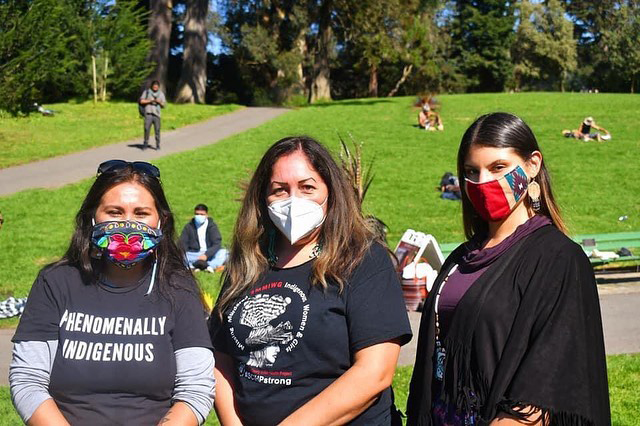 AICD board members Morning Star Gali (left) and April McGill (middle) with Sharaya Souza and at an Indigenous Peoples Day celebration in 2020. Morning Star is Executive Director for Restoring Justice for Indigenous Peoples and is with the International Indian Treaty Council, and April is the Executive Director of the American Indian Cultural Center. Photo by Norm Sands.

This piece was originally published in the April-June 2021 issue of Heritage News. Find the printed version (abridged) here.

BY SHARAYA SOUZA with Mary Travis-Allen and Gregg Castro 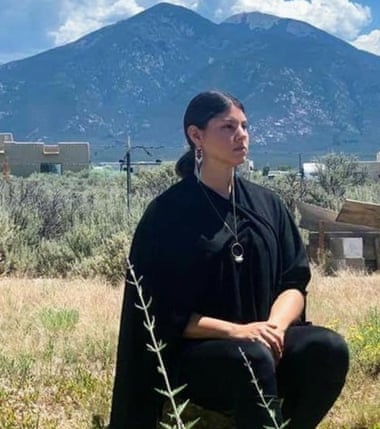 Sharaya Souza (Taos Pueblo, Ute, Kiowa) is the Executive Director and co-founder of the American Indian Cultural District (AICD). She is an ambassador for promoting equitable resource distribution to Native American communities, increasing Native visibility and political representation, and protecting and preserving tribal cultural resources in

[Gregg Castro] San Francisco claims to have a long history, but most of the real history here is unknown. San Francisco has been established for less than 200 years; in Indigenous times that is merely the blink of an eye. Our ancient oral traditional narratives passed down from our ancestors tell us that we have been here since the beginning of time. Even archeological evidence has shown that Ramaytush peoples have lived on the Peninsula for more than 10,000 years.

This means our people have been here longer, and we know this area better. Even though our story of sojourn during the colonial time is rooted in tragic narratives of the Missions, slavery, disease, and genocide (as with most American Indians), and even though known anthropologists falsely labeled our people as “extinct,” we are still the original caretakers of this land and always have been. The Creator gave us a sacred duty to steward this land, and through gratitude we have an obligation to make sure it is cared for in the best way possible, that includes all life and people within it. 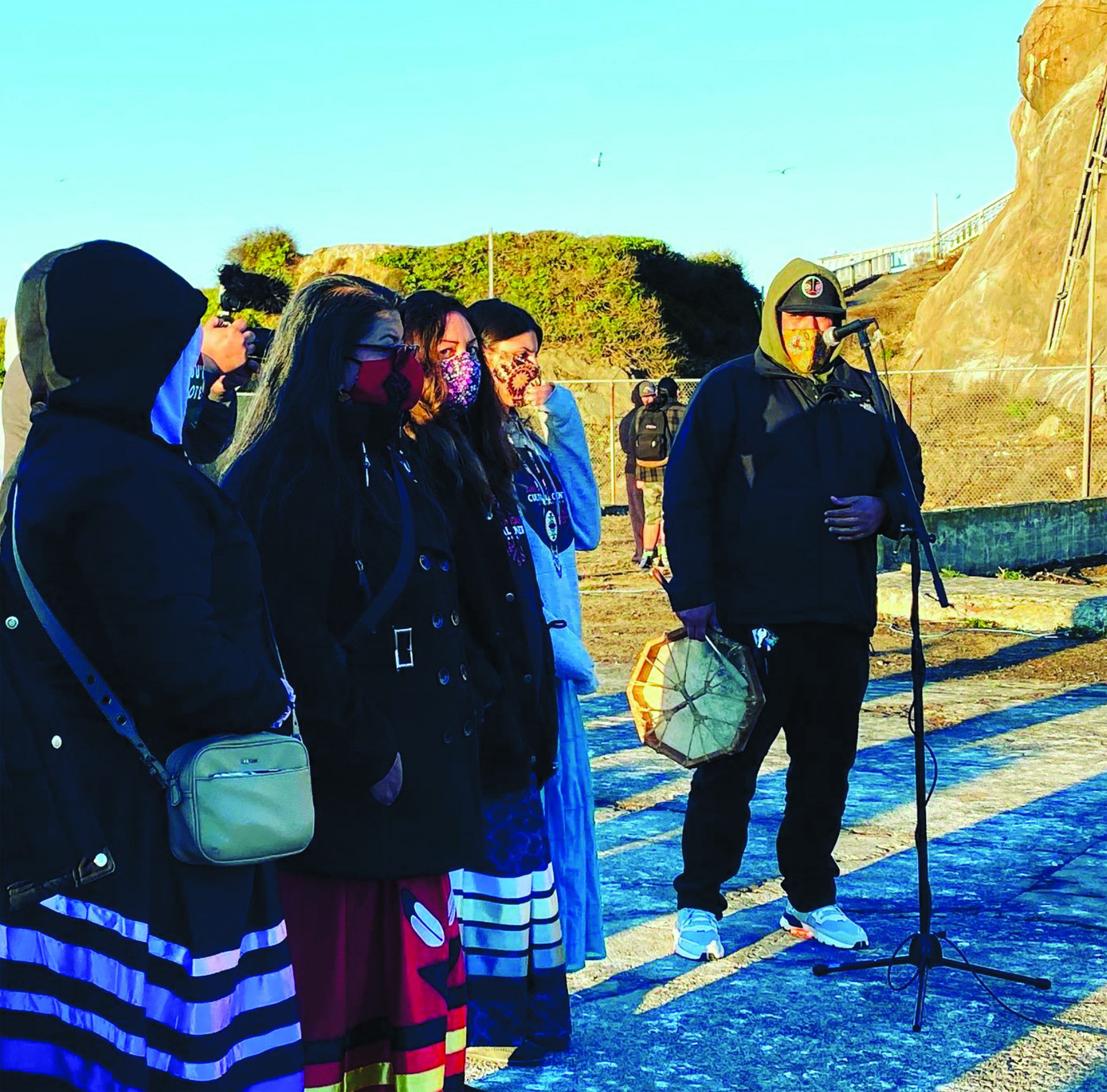 What is the American Indian Cultural District (AICD), and what is its vision?

The Cultural District is made up of two staff, Advisory Board Members, and the Native American Community Coalition. The Advisory Board consists of local American Indian service organizations, elders, youth, and tribal representatives. The Native American Community Coalition consists of a wide range of community members who serve on special interest Councils such as the Elders Council, Youth Council, Two Spirit Council, and the Culture & Wellness Council. Collectively we serve the local American Indian community by preserving and celebrating our unique cultures, strengthening our voices, and increasing our visibility so we can obtain equitable resources, funding, and opportunities for American Indian people. Overall, we seek to empower the urban American Indian community and work together to heal centuries of systemic oppression and racism so we can secure the tools and resources we need to serve our own people. We believe that culturally relevant and culturally competent initiatives are created and enacted by American Indians for American Indians.

What does a meaningful effort to engage in cultural preservation look like for the American Indian community and why is it important?

The reason why meaningful engagement is so important is because current and historic cultural preservation efforts in the city, including those led by the San Francisco Planning Department and San Francisco Heritage, have failed to include a cultural lens for documenting and preserving cultural heritage that is inclusive or reflective of the values of the American Indian community. This has left local tribal cultural resources undocumented and unprotected. For example, San Francisco Heritage uses the National Register, Bulletin 38 definition of Traditional Cultural Properties (TCPs) in their 2014 policy paper, Sustaining San Francisco’s Living History. The issue with Bulletin 38 is the broad range of “historical property types” that have rigorous guidelines on continued use and the structural integrity of a site. First Nation people not only have unique cultural resources that cannot always be documented using that criteria, but we are the only group that can trace their connections to the land and resources to prehistoric times; thus, merging traditional cultural resource preservation with a broad range of TCPs does not give respect to the unique relationships and knowledge of First Nation people.

For American Indians, cultural heritage preservation and tribal cultural resource documentation is not just about preserving structures of the past, it is about living culture, passed down knowledge and traditions, and a relationship and responsibility to the land that exists beyond the lifespan and the lens of a physical structure. Tribal cultural resources can encompass sites, features, places, landscapes, sacred places, and objects that have cultural value to Native American people and tribes. To create credence for American Indian values, AICD and the Association of Ramaytush Ohlone have started working with Planning and SF Heritage through meaningful engagement and consultation to create culturally relevant criteria. 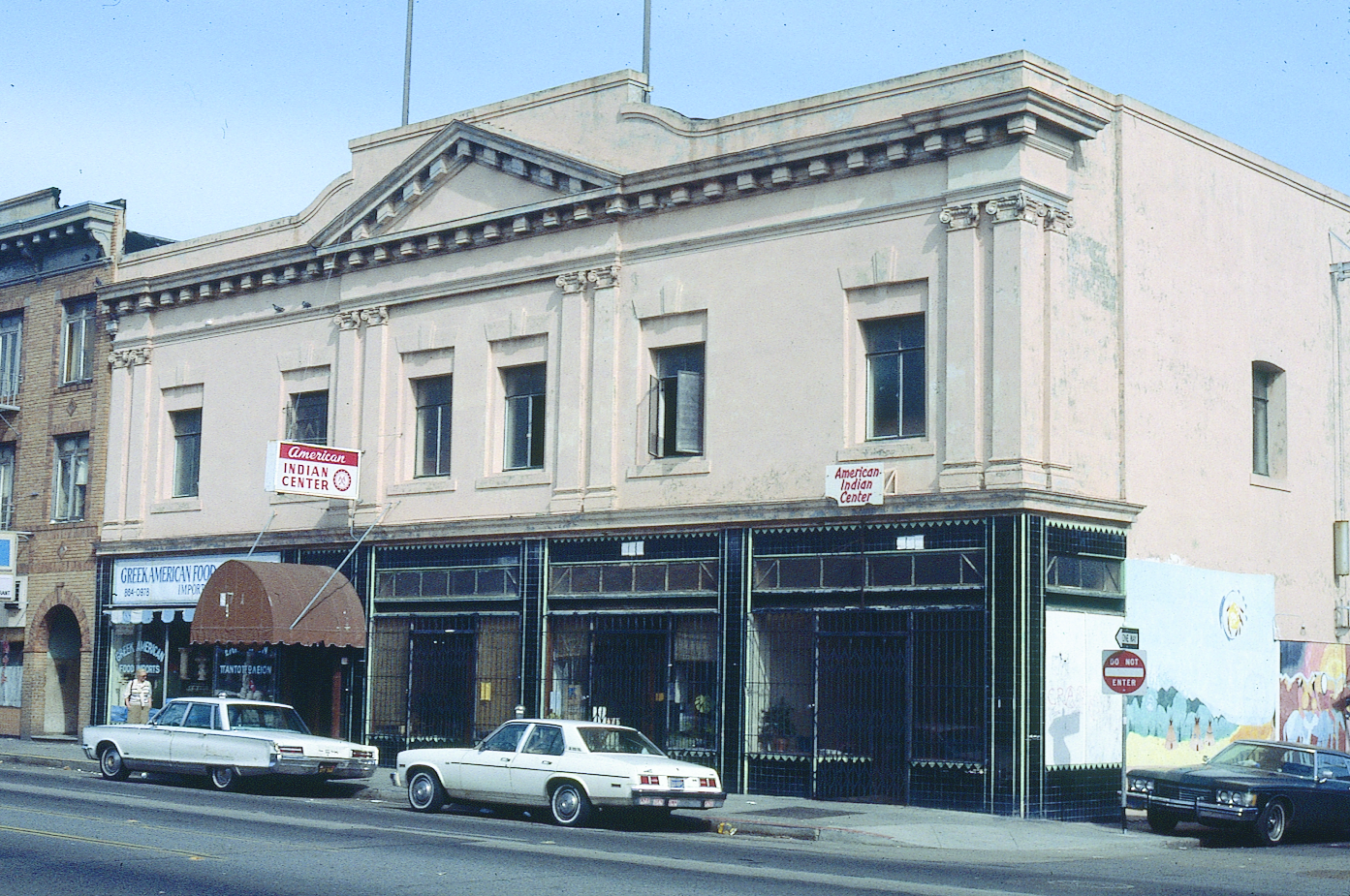 From 1970 to 1988, the American Indian Center was located at 225-229 Valencia Street. Originally built in 1914 for the Serbian Benevolent Society, this building housed a wide variety of services, programming, and resources for the American Indian community. Max Kirkeberg Collection, San Francisco State University.

Sites that hold significance to the American Indian community are not just about existing historic buildings. They are also about sites that used to be, and knowledge passed down through oral storytelling that ties the significance of place to our history and culture despite continued use or integrity of the existing area or structure. Sites listed in the AICD ordinance include a wide range of places, from village sites, to cultural centers, event spaces, and Native-owned businesses.

For example, the American Indian Cultural District ordinance highlights the significance of the original locations for the American Indian Centers on 3053 16th Street and 229 Valencia Street from the 1950s to 1988. The first SF Indian Center was established in the 1950s by the Society of St. Vincent De Paul and later turned over to American Indian Council of the Bay Area in the 1960s. These centers were (and still are) staples for the community. Prior to the fire [that destroyed the first center at 3053 16th Street] on October 10, 1969, it was estimated that the Indian Center served thirty thousand Native people.

Other sites mentioned in the ordinance include the Al Smith’s Indian Trading Post (2200 Mission Street) and Warren’s Slaughterhouse Bar. These two sites were either across the street, or around the corner from the American Indian Centers, creating a small intertribal village in the cultural district once known as “the Little Rez.” Warren’s Bar (1960s -1970s), known today in a new structure as Este Noche, was once known as the most famous “Indian Bar,” where community members would gather to learn about potential housing, jobs, and inter-tribal politics. Famous Native activist Richard Oakes got his first job at Warren’s. Oakes was known for helping lead the Red Power Movement including the 1969 Occupation of Alcatraz, leading the first Native American Studies Department at San Francisco State University, influencing major positive changes in federal Indian policy, and leading successful tribal land return efforts.

In the book Journey to Freedom: Richard Oakes, Alcatraz, and the Red Power Movement, author Kent Blansett describes the importance of gatherings spaces like Warren’s Bar:

This atmosphere fostered much-needed Intertribal interactions. These bars often cut across class lines, as the necessity arose to interact with other Natives who possessed a shared history and a common background. Bars were also places that promoted social interaction through dating or “cruising” for dates. For newcomers to the city, bars were places where they met or located people from their community and established networks of friends. These networks were crucial for sustaining and building an Intertribal community, in that they imparted survival skills to new migrants within the urban environment. Political organizers in the community took advantage of these networks for lobbying purposes.

Preserving the history and stories of these spaces, and of traditional Ramaytush Ohlone cultural sites is vital as they are fundamental starting points for our ongoing narrative. They shape who we are as an intertribal urban American Indian community today and highlight the importance of the work that we do with the American Indian Cultural District, coalition of local American Indian organizations, our Ramaytush Ohlone relatives, and all our community members. As one Washoe elder shared with us, “I am excited about the hope for a new Urban Rez in the Cultural District, it has been a long time since I could feel proud to be American Indian in San Francisco. Growing up here I was afraid to be Indian because people would pull on my braids and ask me where I am from; now I can gather with my people once again, put on a skirt, and feel pride.”

This story appears in the January-March 2021 issue of Heritage News. By Karen Kai Karen… Read More