By Kerri Young, with research assistance from William Beutner

It all started with a photograph we came across from the SFMTA Photo Archive (click image for larger version): 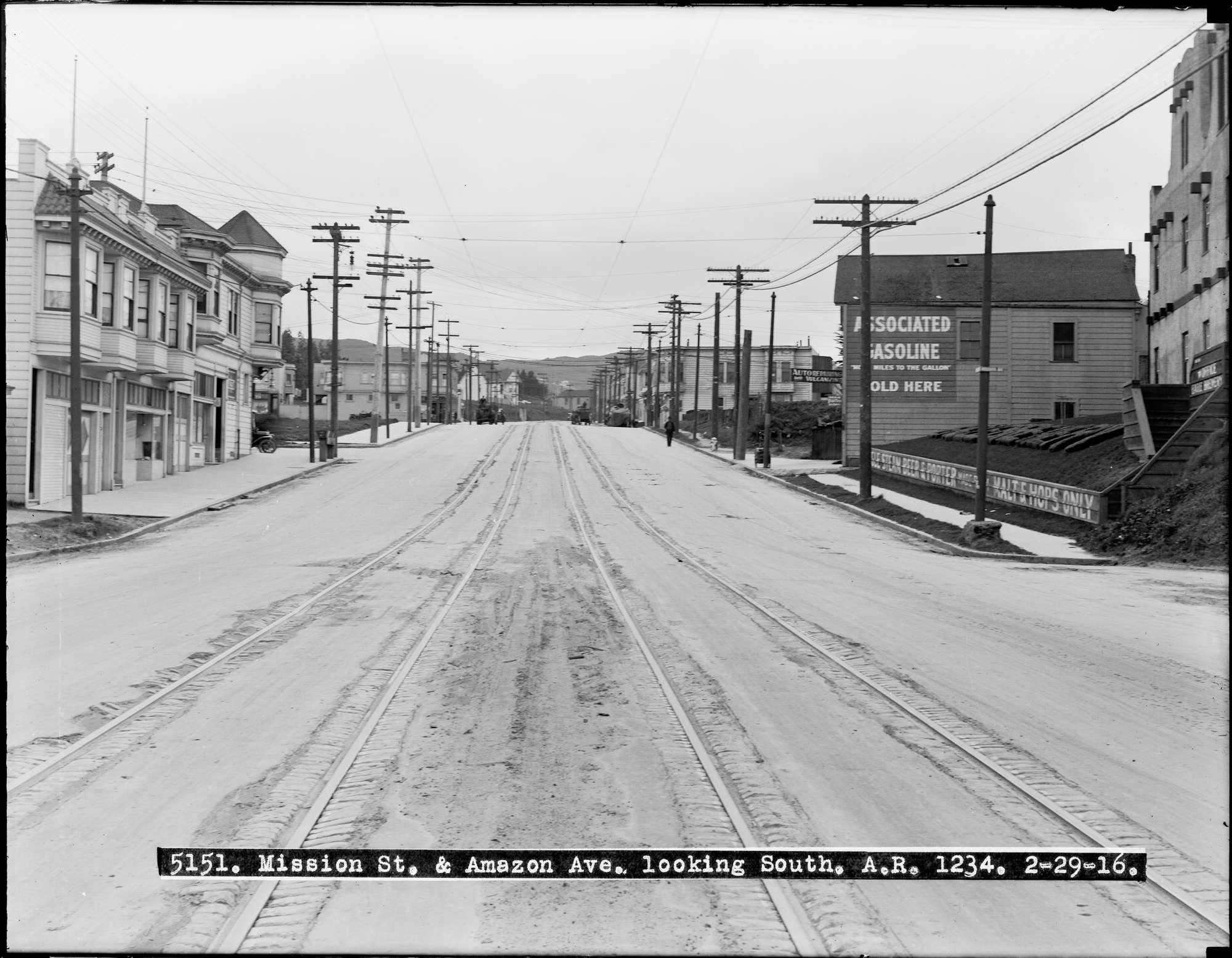 This is a view looking from the corner of what is today Seneca and Mission in the Excelsior District. Geneva Avenue is a little further up the road. We wondered, “What is that big building on the far right?” Judging by the words “MALT,” “HOPS,” “STEAM BEER AND PORTER” painted along the buildings sidewalk-facing walls, this might be a brewery. Let’s jump into this site’s history! 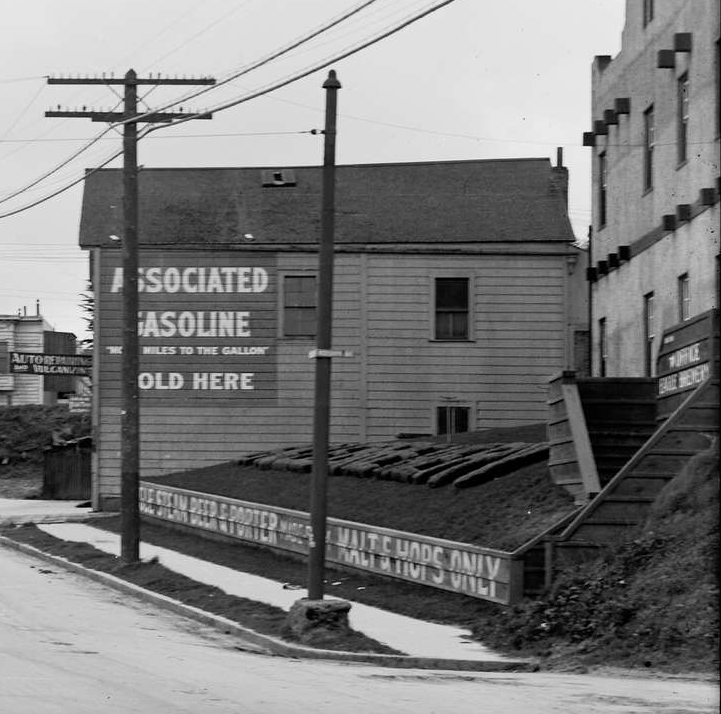 The front lawn area even has topiary hedge letters, but we can’t make out what it says.

Like the auto shop in the center of the photograph, the building that would later replace this beer-focused site would also become an auto parts dealer in the 1940’s. But more on that later. After some research into the 1916 City Directory (these directories are great resources!), we confirmed that the business on this corner —5050 Mission Street— was Eagle Brewing Company! 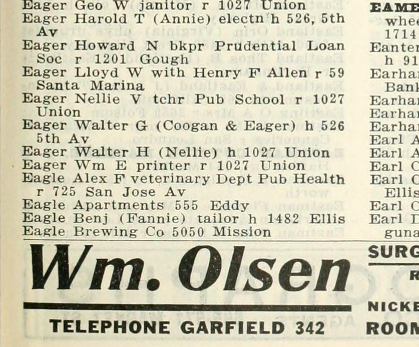 “Eagle Brewing Co” is confirmed at 5050 Mission in the Crocker-Langley City Directory for 1916.

Through further research, our Research Assistant William Beutner discovered that Eagle Brewing Company started in 1899 at 1329 Guerrero St., moved to 2213 Harrison St. by 1905, and remained there until 1911. According to the August 30, 1911 edition of the San Francisco Chronicle, the brewery on Harrison Street was destroyed by fire. The brewery then relocated to 5050 Mission from 1912 until 1918, when it became a victim of Prohibition.

Further information found in San Francisco’s “Building and Engineering News” in 1918 (“Devoted to Architectural, Building, Engineering, and Industrial Activities on the Pacific Coast”) reveals the name of the building as “The Underpin Building,” and its architect as “C. A. Meussdorffer.” According to NoeHill, “C. A.” stood for “Conrad Alfred” Meussdorffer, the son of German parents who came to San Francisco in 1853. After designing the luxurious Beaux-Arts-style St. Regis apartment building in Lafayette Park, Meussdorffer established himself as the architect of choice for San Francisco’s one percent. 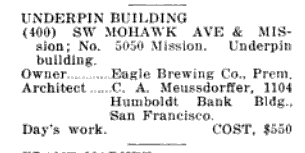 In browsing the Jesse Brown Cook Scrapbooks held at the Bancroft Library (includes photographs, newspaper clippings, and ephemera, primarily centering on the history of San Francisco and police activity in the city), we found an almost full view of the building in 1923, this time looking north on Mission: 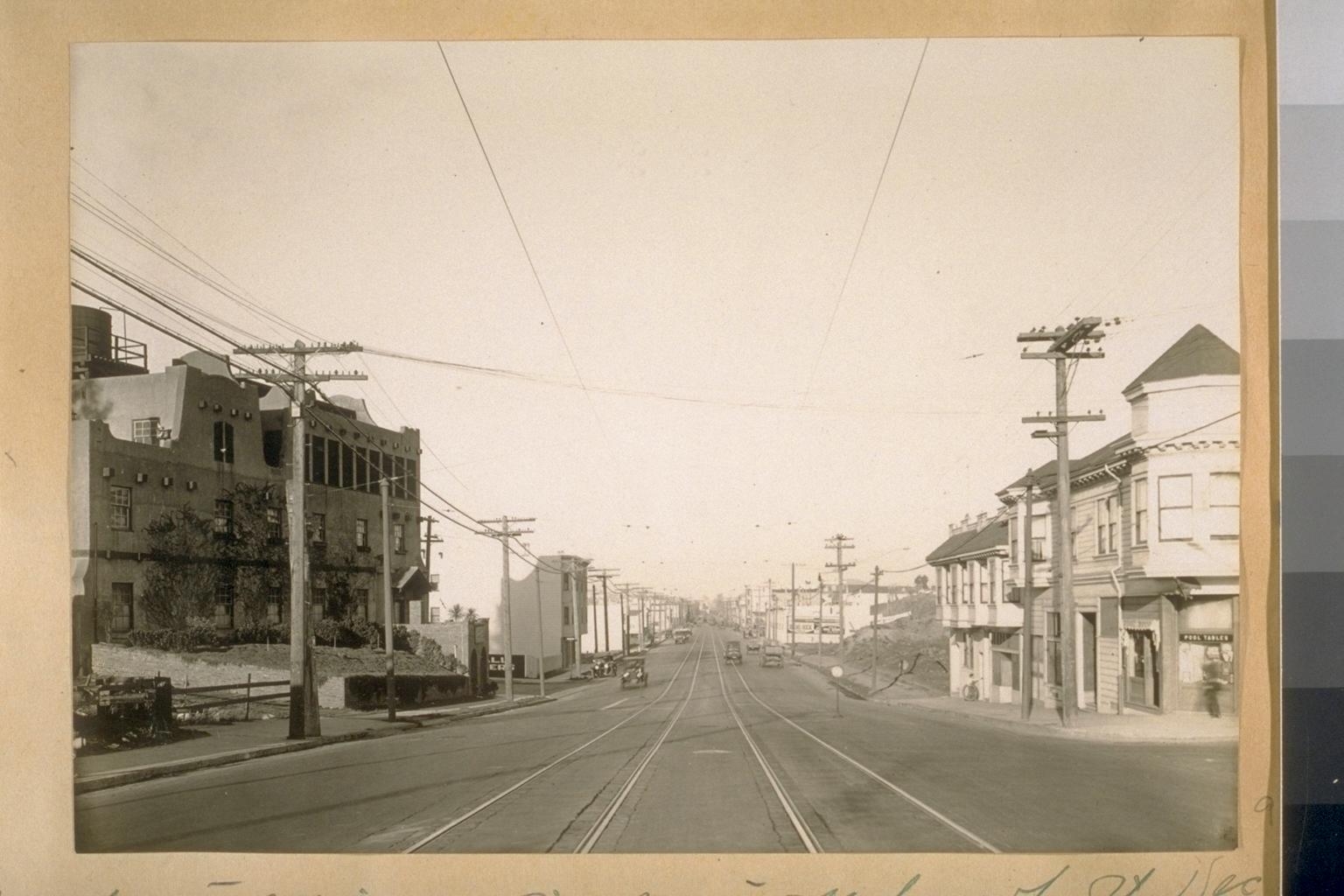 It looks like Meussdorffer didn’t design an ordinary-looking brewery building, instead giving Eagle Brewing Co. a grand and vaguely Mission-style facade. As this photo was taken during Prohibition when the brewery was shut down, there was no one to maintain those topiary hedge letters seen on the front lawn in the 1916 photo, which is a shame. Like the “Building and Engineering News” excerpt, the Bancroft photo’s description also indicates that the street that is now Seneca Avenue used to in fact be named Mohawk. The 1916 SFMTA photograph does label the street in front of the brewery as “Seneca,” though this may be a more recent archival decision. In our research, we found Seneca Avenue, which did in fact already exist as a street when the brewery stood, ended up extending east and subsuming Mohawk’s identity. You can see why this was previously hard to do in this 1873 map detail: 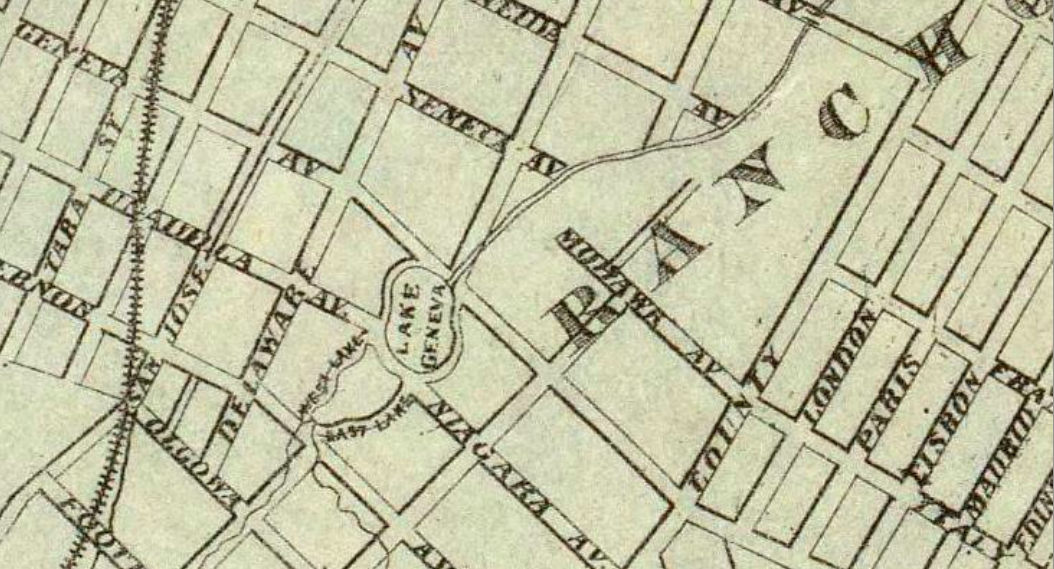 Lake Geneva between Seneca and Mohawk in 1873. The lake is one of the many now vanished waters of San Francisco. It is likely that Seneca was extended during the development of Geneva Terraces starting in 1927. 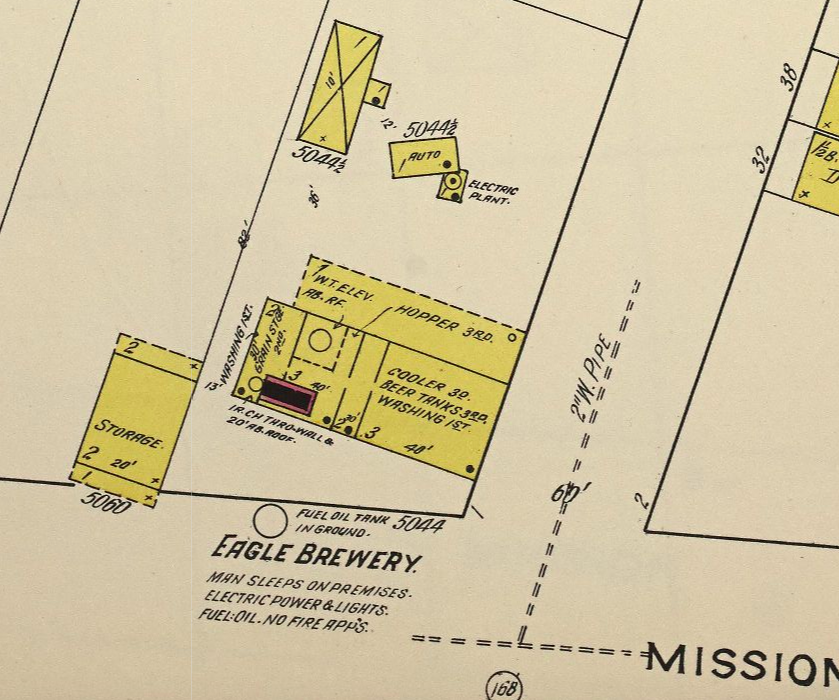 There is a very detailed footprint of the brewery property in the 1915 San Francisco Sanborn Fire Insurance Map. These maps were originally produced for insurance purposes, but are now useful in disciplines such as history, architectural history, ethnic studies, and urban archaeology. As the Bancroft photograph better indicates, the brewery is a large 3-story wood-frame structure with a 40-foot high brick oil-fired oven and an iron smoke stack extending 20 feet above the roof. There was also a water tank on the roof, which you can make out in the Bancroft photograph. On the grounds were a large barn and an electric plant. The site was close to the railway that ran on what is now Alemany Boulevard. Given its 40-foot building height and its 20-foot smokestack, this was a very imposing building!

We know very little about the Eagle Brewing building’s fate after Prohibition; we found evidence in the City Directories that it did in fact open again as brewery in the 1930s, but to instead as a base for brewer E.J. Preston, and then the El Rey and the Albion Brewing Companies for a few years each. Eagle Brewery did make a return in 1941 however, and is listed in the 1941-1942 City Directory back at 5050 Mission. The years between 1942 and 1948 are a bit of a mystery; at any rate, Meussdorffer’s building and Eagle Brewery were gone by 1948, when the new Cresta Auto Parts building went up at the site: 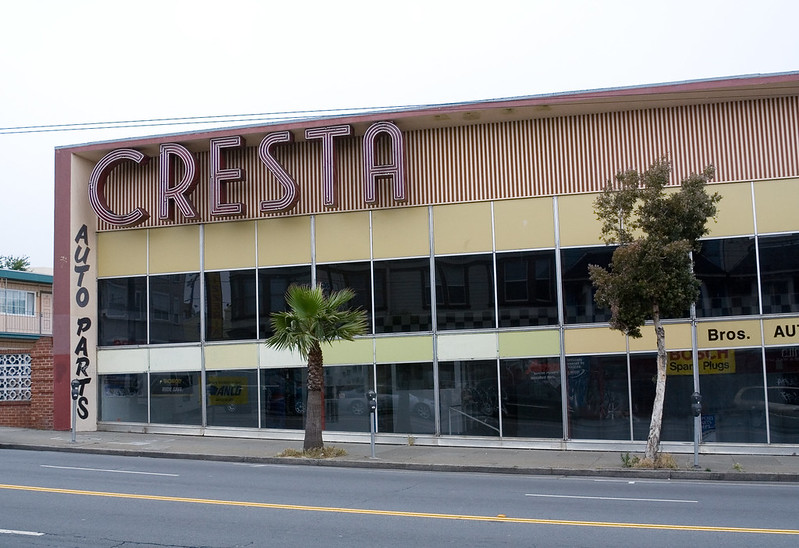 Cresta Auto Parts building in June, 2006. By inarges via Flickr.

This Midcentury Modern building was designed by Mario Ciampi, whose prolific work around the Excelsior took the form of churches and an office building-turned laundromat. Like many buildings in this style, Ciampi’s design featured ample window space, favoring open glass walls over a more bulky support system. Its sleek sign, featuring modern typography, was also notable feature. Cresta Auto Parts remained in business until around 2006, and for a short time housed a “King of Furniture & Mattress” store.

The Cresta Auto building in 2014, repurposed as a furniture and mattress store. Looking on south from Mission and Seneca, similar to the 1916 SFMTA photo. Photo via Google Maps.

After almost 70 years in the neighborhood, Ciampi’s Cresta building was demolished in 2016 to make way for a large mixed-use condo building, touted as the “First Luxury Building of its Kind in the Neighborhood” on the listing site. While the building puts a few more affordable units (15%) into an area with lower housing production, many local residents feel that the building is out of touch and out of reach for neighborhood residents. It is currently leasing.

The Cresta Auto building has now been replaced by a modern mixed-use building (right). Photo via Google Maps.

Regardless of what you think of the site’s current fate, we hope you enjoyed this little piece of Excelsior history. A small note that the building across the street from the brewery in the both the SFMTA and Bancroft photos, at 5099 Mission, still remains today (as Roma Pizzeria): 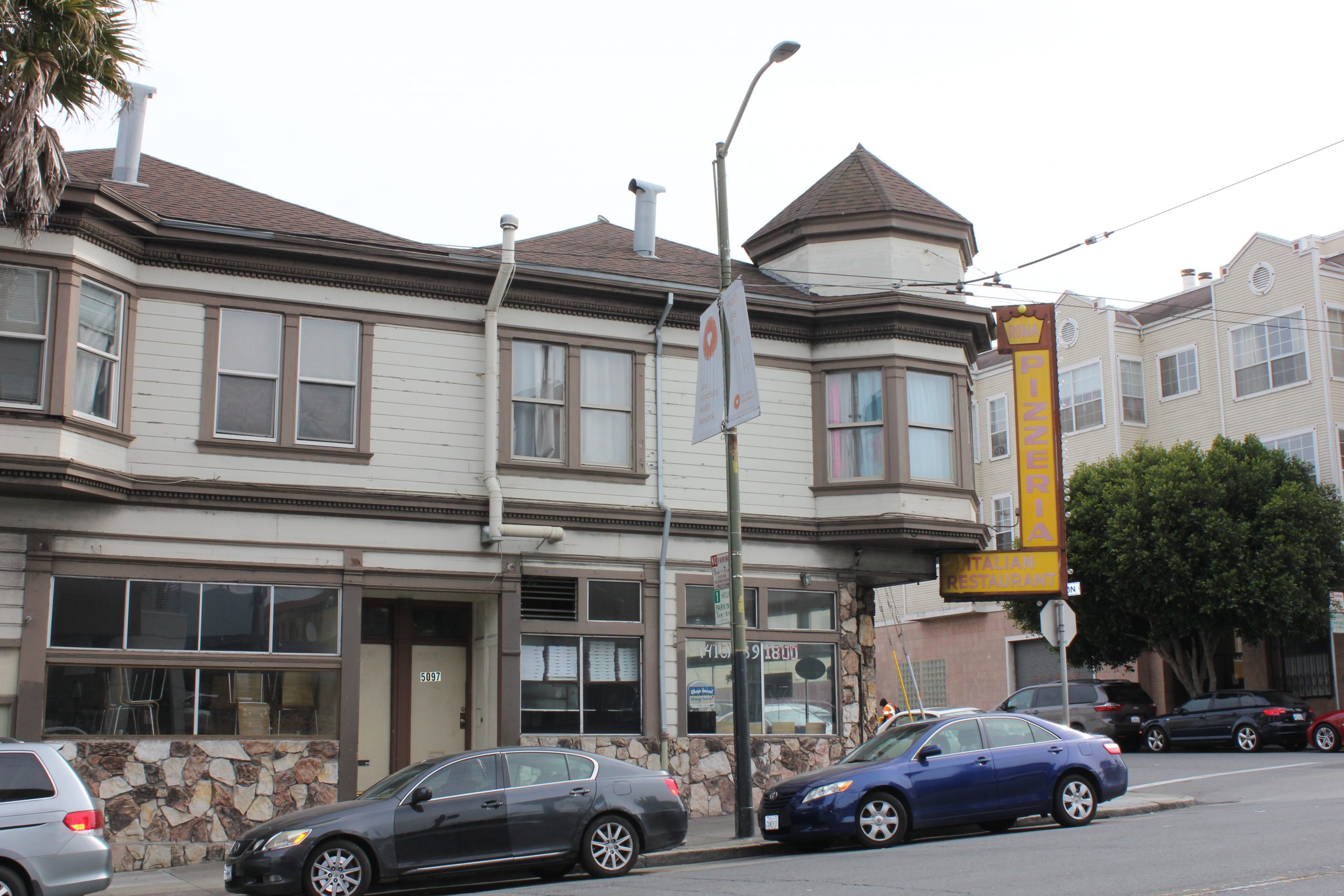 The building at 5099 Mission Street today is a reminder of this Mission block’s historic streetscape in the early 20th century.