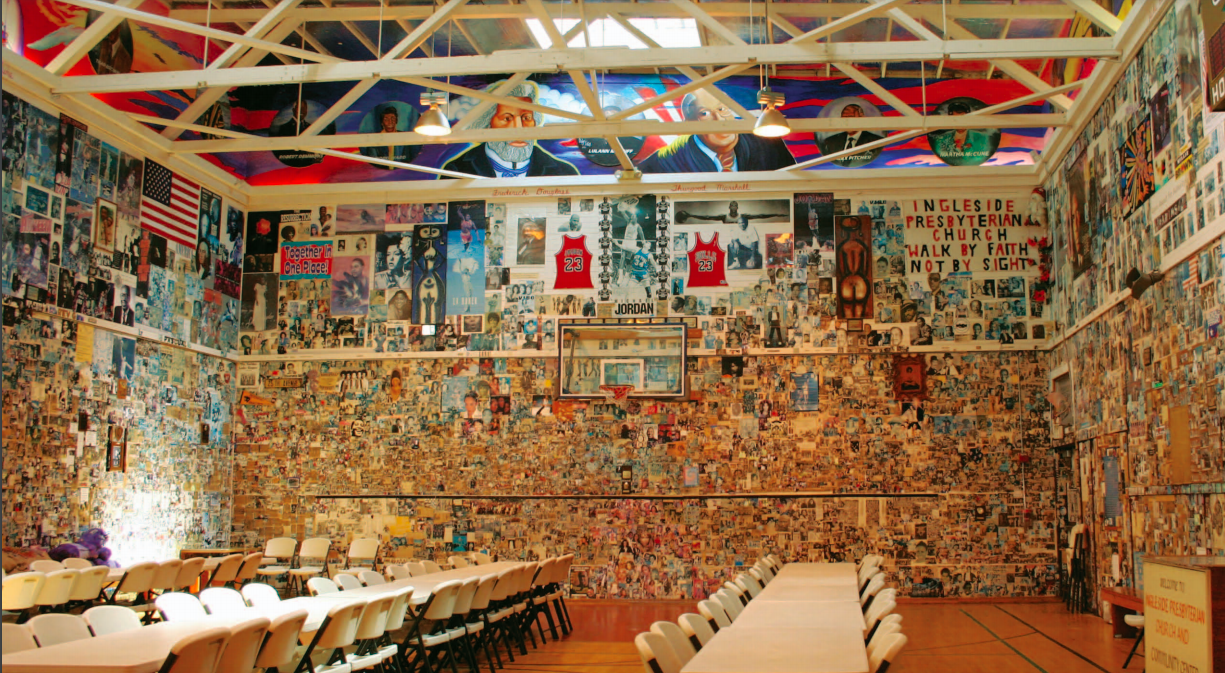 This story was originally published in the Summer 2015 issue of Heritage News.

In the heart of San Francisco’s Ingleside neighborhood, behind the classical edifice of Ingleside Presbyterian Church, is The Great Cloud of Witnesses — an awe-inspiring work of art celebrating African American leaders, heroes, and artists. Adorning the interior walls of the church located at 1345 Ocean Avenue, The Great Cloud of Witnesses is a sprawling mural collage continuously created by Reverend Roland Gordon since 1980. Heritage is currently working with Church leadership, the San Francisco Planning Department, and pro-bono consultant Erica Schultz to nominate the building and its interior murals as a San Francisco Landmark. In addition, Architectural Resources Group (ARG) Conservation Services is developing a menu of possible conservation treatment strategies for the delicate and unique mural.

The Great Cloud of Witnesses

Ingleside Presbyterian Church was constructed at its current location in 1923. The Classical Revival ecclesiastical building was designed by prominent Bay Area architect and developer, Joseph A. Leonard, to house nine different congregations and a community center. Called “Ingleside Community Church” when it first opened, it would eventually become known as “Ingleside Presbyterian Church.” 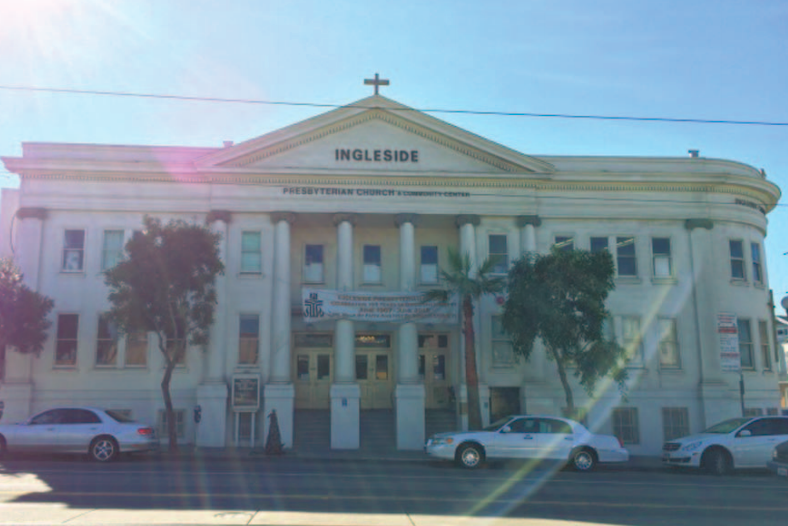 While the interior may be legendary, the building itself (b.1923) is a dignified example of the Classical Revival style. Photo courtesy of Erica Schultz.

Reverend Gordon started work on the collage in 1980 when he tacked an image of Muhammad Ali to the gymnasium wall in an effort to inspire African American youth, who made up much of his congregation. The collage has expanded over time by incorporating images he collected and/or donated by visitors and community members. The result is a visual documentation of over three decades of African American history. 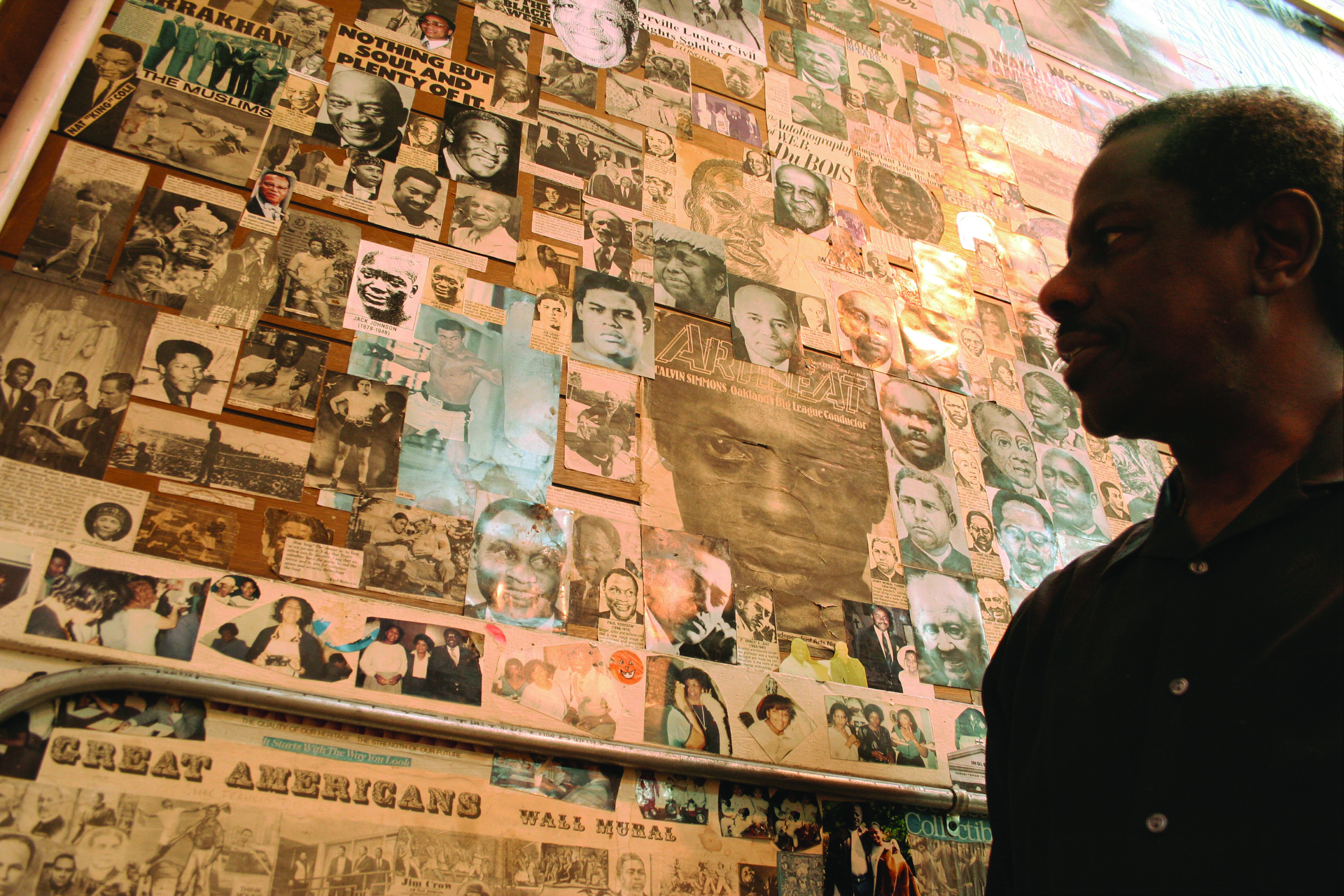 Reverend Gordon stands in front of a section of the Great Cloud of Witnesses.

The mural collage covers the walls of nearly every interior room (except the sanctuary) and is the building’s most significant interior feature. As pastor of Ingleside Presbyterian Church since 1978, Reverend Gordon created the work of art with the goal of providing youth in the neighborhood with role models and inspiring them to reach their full potential. The work is primarily a collage of newspaper and magazine clippings, posters, framed prints, painted murals, and objects depicting prominent African American figures throughout history. Those depicted in the collage come from a wide array of disciplines, including science and technology, politics, entertainment/music (actors, singers, and composers), literature (authors, poets), and sports. 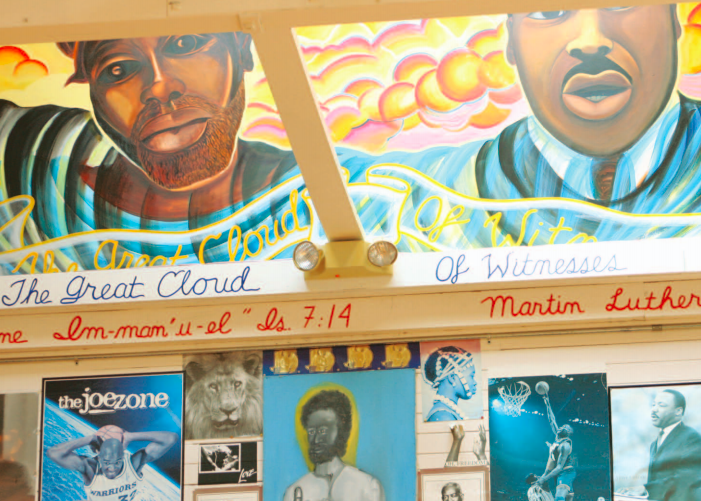 Among the many icons painted in the building is Civil Rights hero Martin Luther King, Jr. Photo courtesy of Dani Vernon.

In addition to the collage, a painted mural by Precita Eyes muralists Susan Cervantes, Selma Brown, and Ronnie Goodman rings the top of the gymnasium on all four walls — with additional portraits by Eugene White. Commissioned by the church in 1992 to pay tribute to local and national leaders of the Civil Rights Movement, the painted mural depicts civil rights heroes such as Martin Luther King, Jr. and Jackie Robinson.

Numerous precedents exist for designating murals and folk art environments as historic landmarks. Historic designation of murals, in particular, is an evolving discussion within the field of preservation. In San Diego, the Chicano Park Monumental Murals were added to the California Register of Historic Resources in 1997 and to the National Register of Historic Places in 2013. The Epic of American Civilization (1934) mural by Jose Clemente Orozco and the Detroit Industry (1933) mural by Diego Rivera were designated National Historic Landmarks in 2013 and 2014, respectively.

While no mural in San Francisco has been designated a City Landmark, several locally-designated buildings identify murals as character-defining features. The designation ordinance for City Lights Bookstore (San Francisco Landmark #228), for example, calls out a painted mural on the ground floor of the south elevation as a feature to be preserved.

Lessons can also be learned from the nomination of Grandma Prisbrey’s Bottle Village in Simi, California, listed in the National Register as a “folk art environment” in 1996. Bottle Village is a one third-acre area containing an “assemblage of hundreds of thousands of mass consumer throwaway objects from the late 1950’s and early 1960’s, most of which were salvaged by Mrs. Prisbrey through her daily treks to the local dump for years.” Wishing wells, shrines, follies, cactus gardens, sculptures, connected walkways, and a series of ornamental structures comprise the district. Significant in the areas of art, architecture, and landscape architecture, Bottle Village was nominated to the National Register as a “work in progress,” much like The Great Cloud of Witnesses.

The exterior of the Mission Cultural Center at 2868 Mission Street. In addition to the… Read More