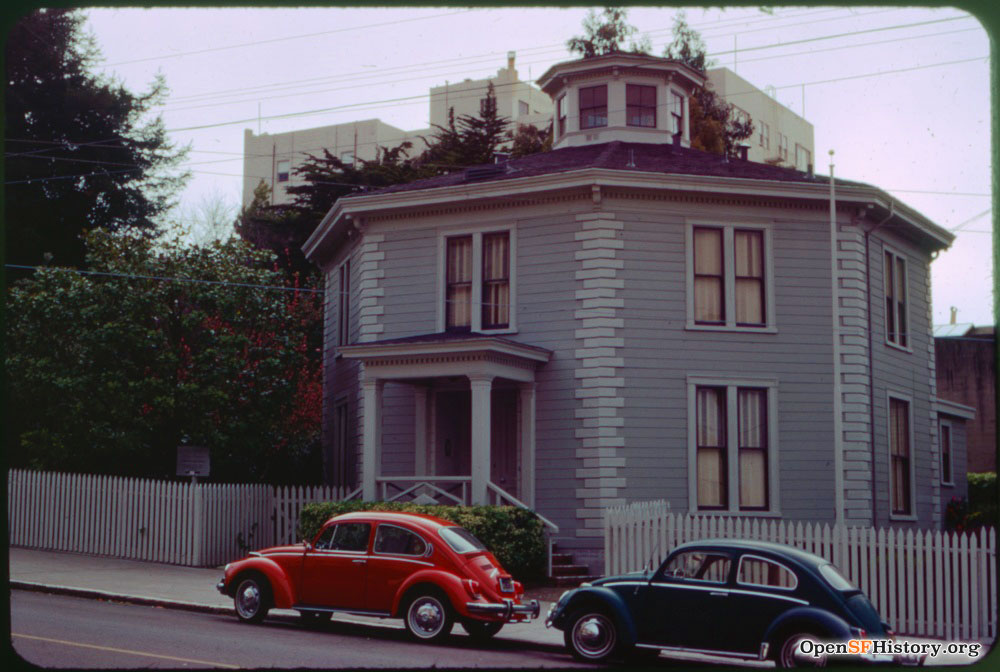 “A Home for All” is what Orson S. Fowler named his 1853 book on the benefits and “superb arrangement” of the octagonal house he constructed in Fishkill, New York. Inside, readers learned how an eight-sided building improved air circulation, maximized light, and, in approximating a sphere, drew nearer to natural perfection. Fowler brooked no disagreement on the superiority of roundness over angularity: “This is not one of those fancy matters which allow of diversity of opinion, but is a fixed ordinance of Nature…”1

“A Home for All” was more than an instruction manual or set of floor plans; it was a philosophical treatise, a judgment on taste and acumen (“[t]he quantity and quality of man’s INTELLECT evince themselves in the houses they build.”), and practically a call for revolution. Eight-sided houses of all sizes and elaborations sprung up across the country in the wake of Fowler’s book, which went through several printings and was commented upon as far away as France, Hawaii, and China.

Some enterprising builder brought the fad to the boomtown of San Francisco, where amid humbler shanties, pre-fab iron houses, and gothic cottages, at least five octagon houses went up from Russian Hill to Rincon Hill south of Market Street. 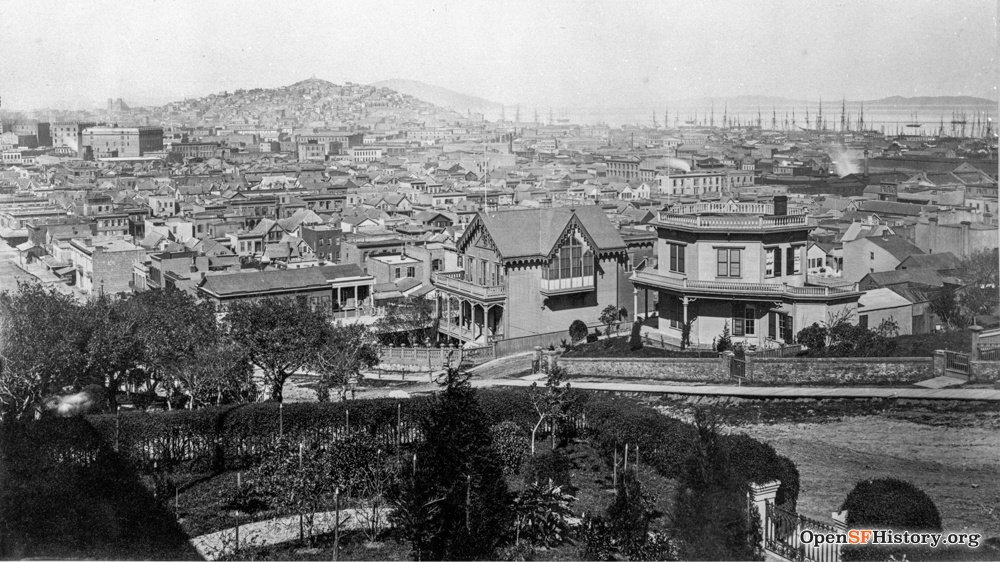 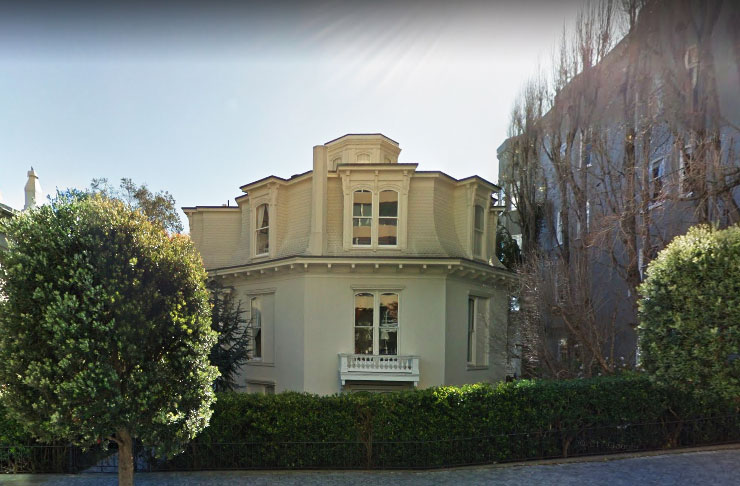 Built as a two-story house in the late 1850s, 1067 Green Street received a Mansard-roofed third story and a cupola (octagonal, of course) under the occupancy of the Feusier family, who owned the property from the 1870s to the 1950s. This house is constructed close to Orson S. Fowler’s specifications with its exterior walls composed of lime cement. One section of his book is titled “Wood is Objectionable,” but on lime concrete he wrote, “Mixed with sand, formed with brick or stone into any shape we please, it petrifies and remains forever. How simple! How effectual! How infinitely useful!” From New York State, Fowler didn’t consider the seismic vulnerability of such construction in a place like California, but situated on the firm ground of Russian Hill, the Green Street house withstood the 1906 earthquake and was lucky to be missed by the subsequent fires. 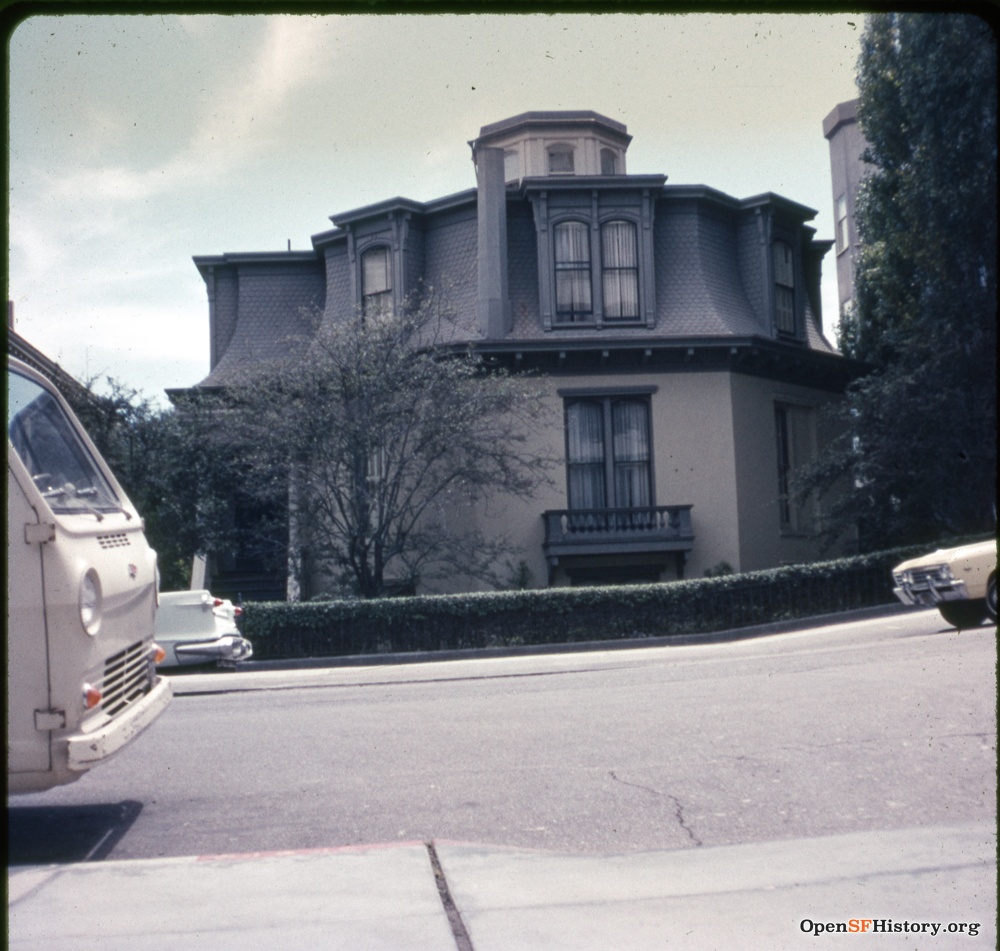 While it has a good-sized garden around it, Fowler would be disappointed that today surrounding trees and apartment buildings deny it the full advantages of sunlight on the west and north.

The Board of Supervisors designated 1067 Green Street as San Francisco City Landmark #36 on November 2, 1970. 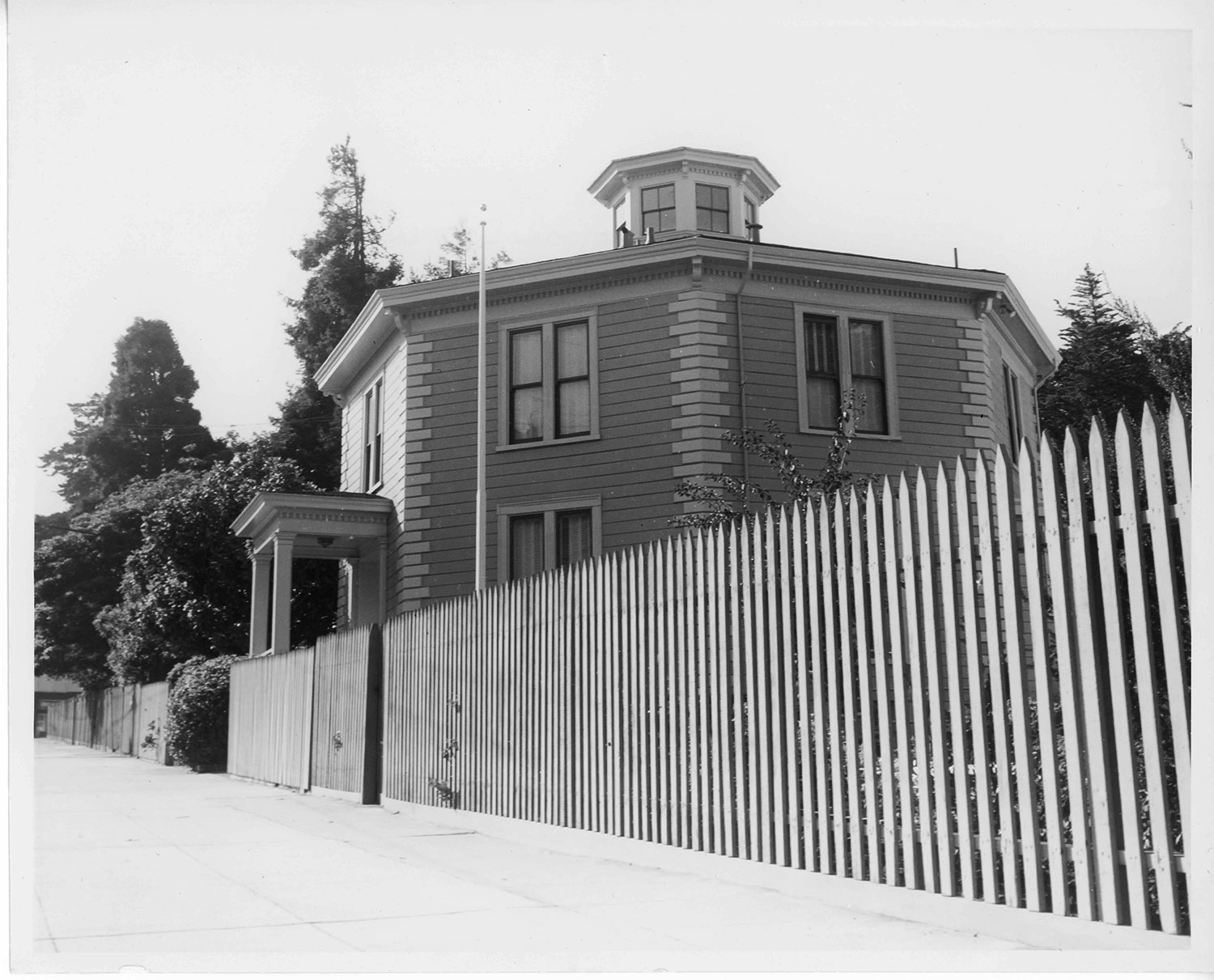 William and Harriet McElroy built their octagon house on the east side of Gough Street between Union and Green Street in 1861, when Cow Hollow’s bovine population truly rivaled the neighborhood’s human presence. William died ten years later, but his widow lived in the house until 1891. Poet Daniel O’Connell lived inside for the next three years, making it somewhat of a Bohemian haunt before Harriet McElroy sold the property in 1894. 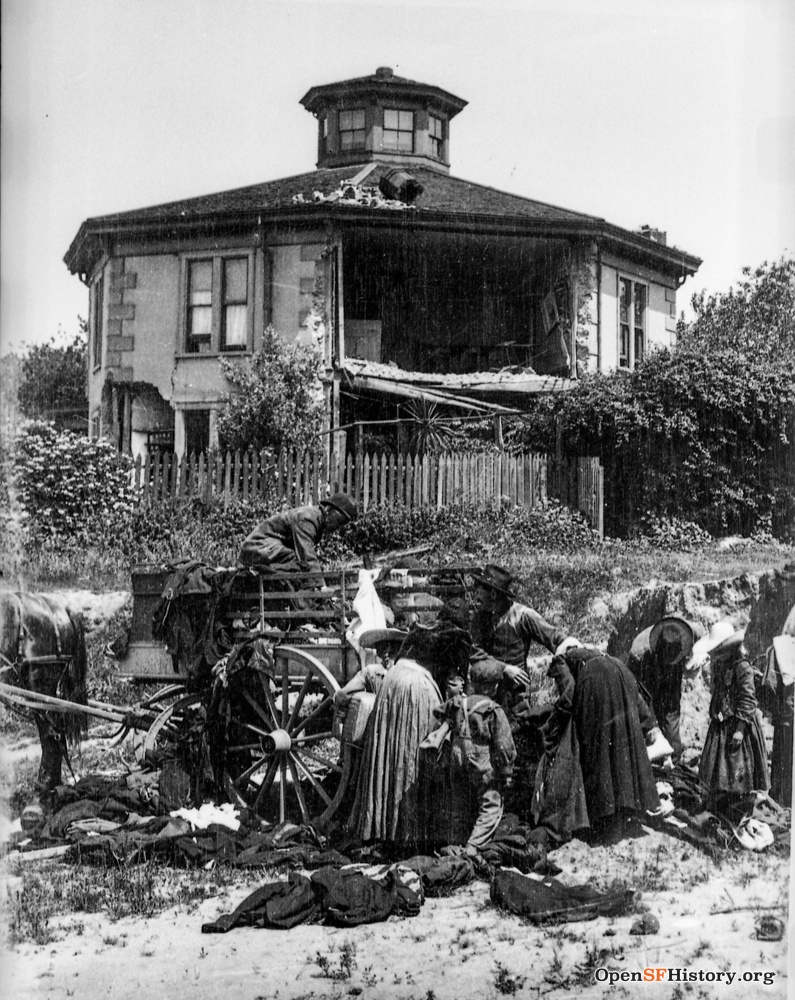 The post World War II years were not good ones for preservation. One of the last San Francisco octagon houses, at the corner of Green and Jones Street was demolished for an apartment building in 1950. The following year, the McElroy house was endangered. The Pacific Gas and Electric Company had purchased the property as a possible substation site, and owned the house for years as a neglectful landlord to three spinster sisters. Ironically, the house was not wired for electricity under the electric company’s ownership.2

In 1951, the company decided to sell the property and it seemed little chance any new buyer would preserve the ninety-year-old house in its state of disrepair. In stepped the National Society of Colonial Dames of America, who saved the house by purchasing it and moving it directly west across Gough Street onto property donated by Lucy and Edith Allyne.3 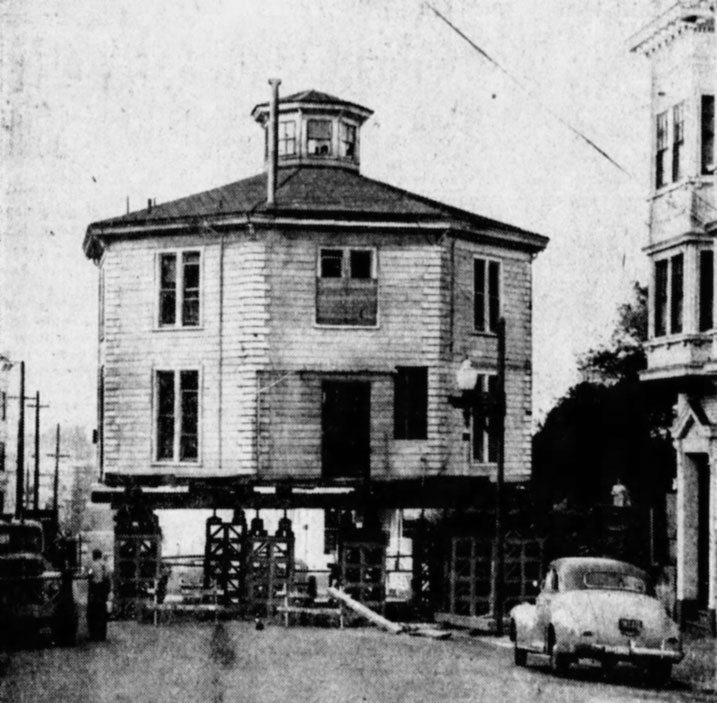 On April 7, 1953, the restored house was dedicated as a museum of eighteenth century furniture, manuscripts, and mementos, and still serves as the California headquarters for the society.4 The building was designated as San Francisco City Landmark #17 on December 30, 1968, and it is also listed on the National Register of Historic Places.

The Colonial Dames open the house for tours twice a month (although, of course, pandemic restrictions currently have those on hold). When you visit, pay particular attention to the upper floor, which retains the original wedge-shaped room configuration, and decide for yourself if, in the words of Orson Fowler, “the octagon form is more beautiful as well as capacious.”

A Home for All, or the Gravel Wall and Octagon Mode of Building, by Orson S. Fowler (1854 edition at Archive.org)

1. Orson S. Fowler, A Home for All, or the Gravel Wall and Octagon Mode of Building (New York: Fowler and Wells, 1853.

3. The remainder of the Allyne’s property to the south became a city park in 1964.