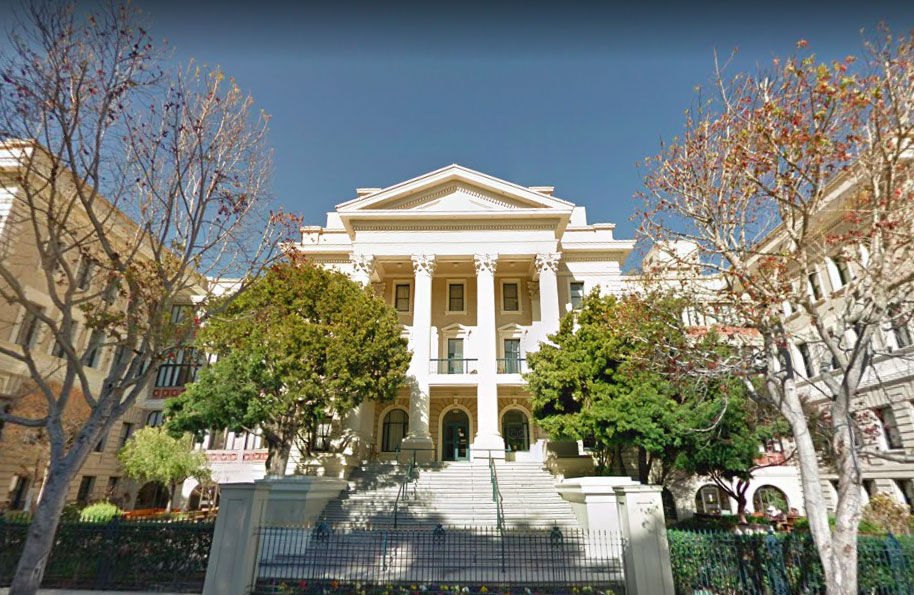 On July 15, 1909, the Southern Pacific Railroad Hospital formally opened on the northwest corner of Fell and Baker Streets and was hailed as “the finest of its size in the world.”1 The medical center complex, with powerhouse building, annex, and social hall behind the three-winged main building, is remarkably intact today. Listed on the National Register of Historic Places, it is also designated as San Francisco City Landmark #192.

Working on railroads was a particularly hazardous occupation and when injuries occurred they often were severe and suffered in remote locations. Companies initially contracted with local physicians along lines or had their own “railroad surgeons” on staff at stations to handle the medical needs of employees, passengers, and in practice any injury or illness deemed railway-related. (Read more about railroad surgeons.) 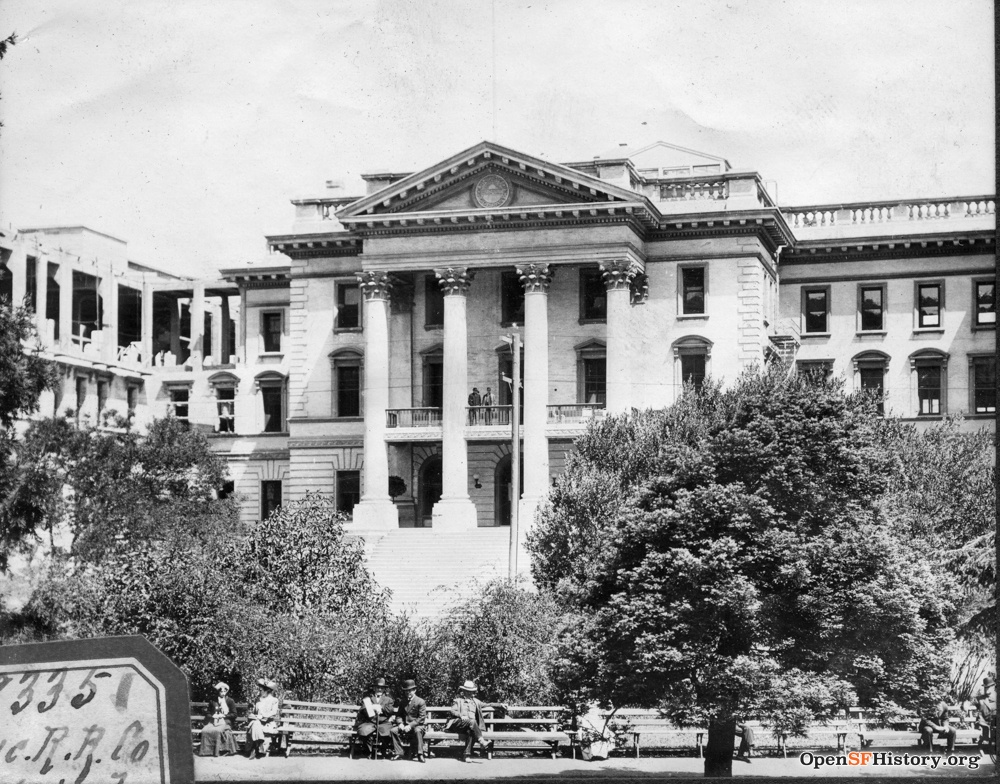 In 1869, the Central Pacific Railroad built the first railroad hospital in Sacramento to treat long-term illnesses and serious injuries. Other railroad companies followed. A corporation operating its own hospital sounds expensive, but the daily cost per hospital patient compared to contracting out to physicians was less than half. Hospital funding also came from employee dues, charitable contributions, and monthly subsidies from the company itself. Railroads with hospital systems were subject to fewer injury–related lawsuits, and the facilities were seen as a way to increase public goodwill for an industry frequently vilified. 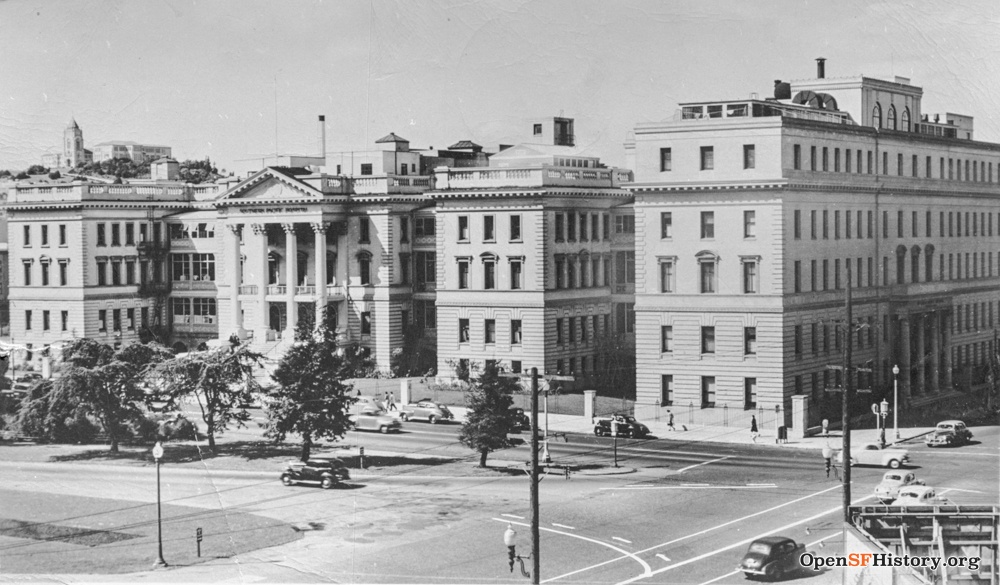 When the Mission Street hospital was destroyed in the 1906 earthquake and fire, a large parcel at Fell and Baker Streets across from the Golden Gate Park panhandle was acquired for its replacement. The real estate purchase of 2.5 acres in a respected residential section was considered one of the largest real estate deals in the immediate aftermath of the disaster.

The new Southern Pacific Hospital had 450 beds and opened as the largest private non-governmental medical institution in the city. Architect Daniel J. Patterson designed an imposing Neo-Classical main building with three wings and steep center entry stairs. The powerhouse, nurse’s quarters, and social hall (constructed later) line up behind the main building along Hayes Street. An eastern extension of the hospital on the Baker Street side was added in 1930.

Page & Turnbull, which prepared the campus’ National Register nomination, described the design elements and their related significance: “Southern Pacific Company Hospital is important as a unified architectural grouping. Each of the buildings relates to the others on the site, possessing the same classically-derived rusticated base and crisply modeled monumental portico, quoins, cornice, and window surrounds. The symmetrical massing and proportions of the main hospital structure lend a dignity to the streetscape.”2

Such dignity is welcome on Fell Street, a major artery from downtown to the Richmond and Sunset Districts. Hundreds, if not thousands, of automobiles fly past daily. 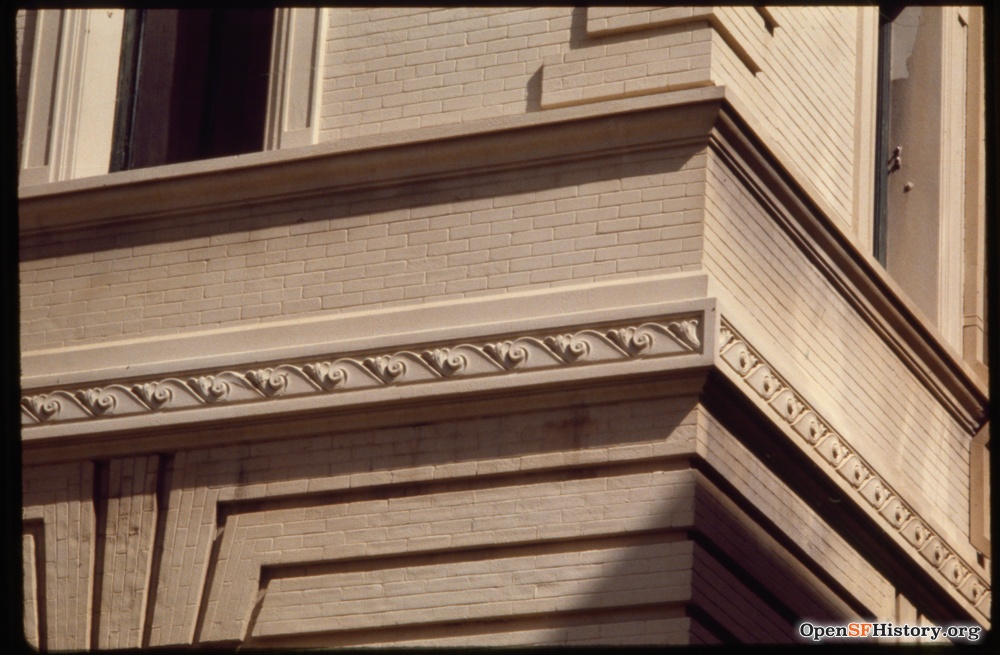 After the hospital closed under financial duress in 1974, the campus sat empty for almost a decade before Mercy Housing readapted it for senior housing in 1982-83. The $12.5 project created 158 units. A lottery on September 6, 1983, determined the first residents to move in at an average rent of $150 a month.

In 1989, the Southern Pacific Hospital campus, a rare intact medical complex from the early twentieth century, was both added to the National Register of Historic Places (89000319) and designated a City Landmark.

The History of Southern Pacific Hospital. A nice 2014 article by Nuala Sawyer (Hoodline)