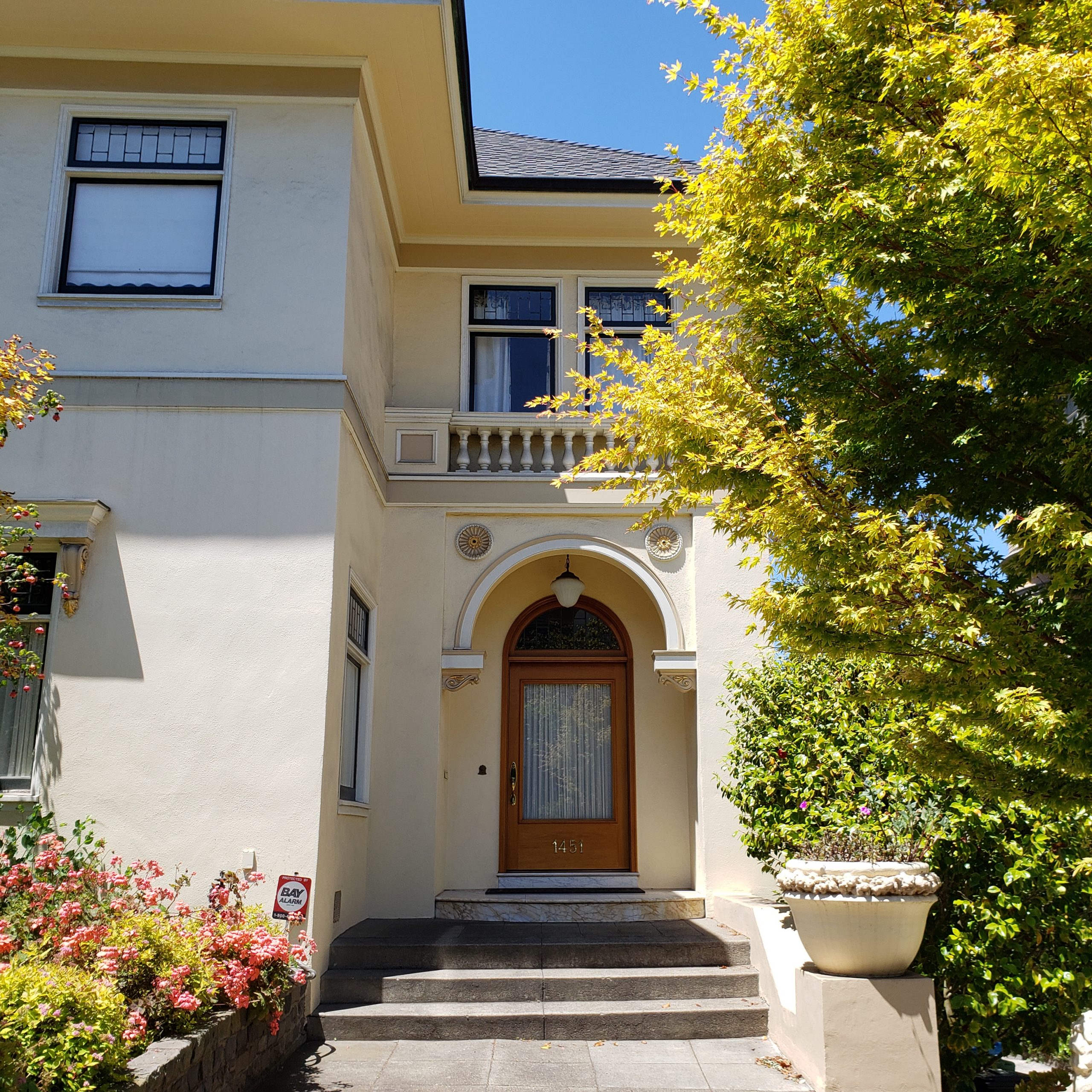 Chautauqua House, once the formal headquarters of the AIHS at 1451 Masonic Avenue in the potential Ashbury Heights Historic District.

Many cultural sites and locations throughout the San Francisco Bay Area are significant to 20th Century urban American Indian heritage and activism. During the 1960s and 1970s, American Indians entered into spheres of activism like the Red Power Movement and American Indian Movement. During this time foundations and organizations provided grants and many non-Natives were receptive to the concerns and issues raised by American Indians. It was in this environment, and notably in urban cities like San Francisco that embraced and celebrated its growing diversity, that the American Indian Historical Society (AIHS) flourished.

The AIHS was founded in 1964 by Rupert Costo (Cahuilla), his wife Jeannette Henry-Costo (Eastern Cherokee), and thirteen other California Indians from different Tribes. Costo served as president of the organization until its dissolution in 1986. The San Francisco based group sought to improve education, communication, and cultural development among American Indians.

Costo’s family was rooted in an intergenerational tradition of leadership and activism, and early in his life Costo was an active member of the California Indian Rights Association, and lobbied in Washington, D.C., on behalf of many Tribes. After establishing himself as a civil engineer and Cahuilla spokesman, Costo focused his energies toward integrated education, while Jeannette Henry-Costo, formerly a reporter for the New York Times Detroit Free Press, was a strong personality who served as AIHS’s executive secretary and tirelessly worked as an editor for the society’s publications. Married for nearly forty years, the Costos worked as partners in bringing attention to American Indian concerns. In addition to their dedication to AIHS, they wrote and edited several scholarly works on Native American history and culture. Together they worked to reach American Indians and non-Natives with an emphasis on education and equality, and continued rallying for greater improvements even as victories in Indian country occurred over their lifetimes. Rupert Costo passed away in 1989, and Henry-Costo in 2001. 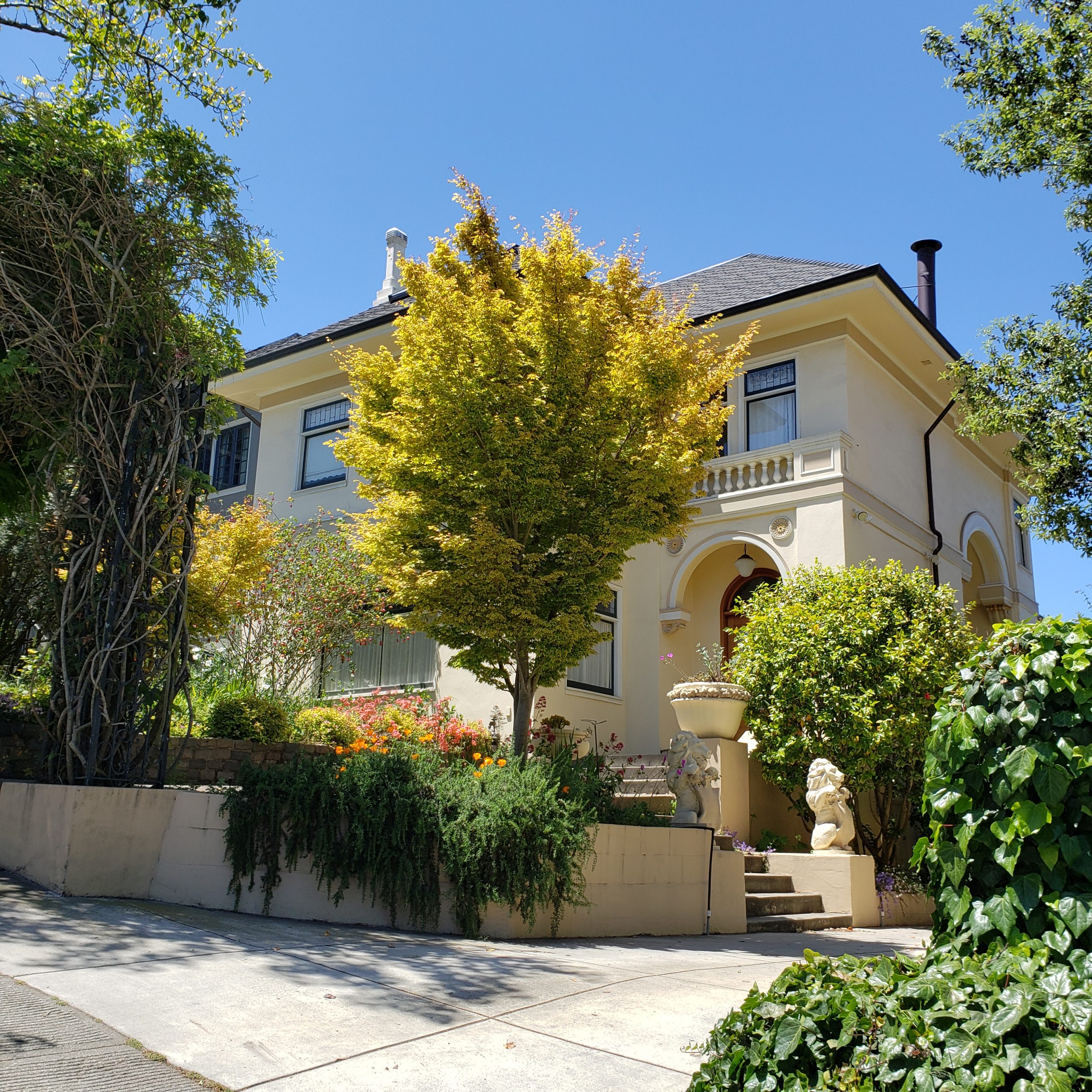 The San Francisco Planning Commission granted 1451 Masonic for use as the AIHS in March of 1967.

Located initially at the private home of the Costos, the organization sought a site for a national headquarters with space for meetings, a library, and an art museum. Eventually, Henry-Costo along with original AIHS board member Bertha Stewart (Tolowa) found a suitable location in a two-story, nine room Period-Revival style house built in 1900 at 1451 Masonic Avenue, in what is today the potential Ashbury Heights Historic District. Located between the Panhandle and Buena Vista Park, the headquarters was less than half a mile south of the iconic Haight and Ashbury intersection, which at the time of AIHS’s founding in 1964 was home to a burgeoning hippie subculture.

AIHS decided on “Chautauqua House” as the name for their newly established headquarters. Chautauqua, a Seneca word roughly meaning “to take fish from the waters,” was an homage to the Chautauqua series where lecturers and artists traveled across the country in the late 19th and early 20th centuries. Additionally, AIHS selected the term to symbolize American Indian peoples embracing the diversity of American Indian history, cultures, and education.1 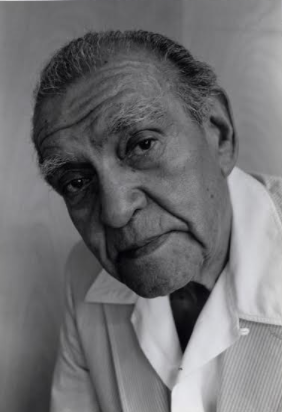 Portrait of Rupert Costo. Joseph Senungetuk, Alaskan Native, recalled how Costo enjoyed tending his twenty-one rose bushes in the front courtyard of the Chautauqua House, and a good cup of freshly ground French roast coffee.2 Photo courtesy of the University of California, Riverside.

AIHS was entirely volunteer-run. A few months after the Historical Society officially opened at 1451 Masonic, the San Francisco Chronicle reported that members of this activist organization numbered 822, both American Indian and non-Native, with associate membership from 42 universities and colleges throughout the country including Cornell and Harvard.3  Members challenged textbooks (which largely excluded and whitewashed the experience of American Indians), testified at congressional hearings, created an American Indian-controlled publishing house, coordinated community meetings locally and even country-wide, and lobbied for protection of burial grounds.

“In the beginning, we thought we would be devoted to nice, quiet research,” Henry-Costo told the San Francisco Chronicle in September 1967. “But confronted with various issues, we’ve had to fight. We’ve become known as ‘activist’ historians, although we never intended it that way.”4 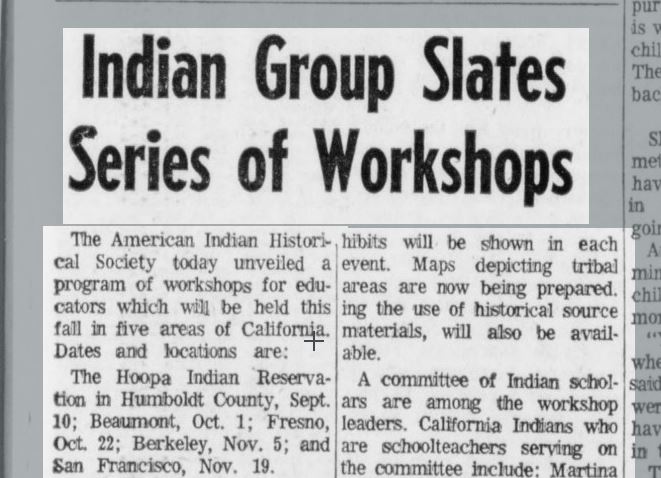 An excerpt from article “Indian Group Slates Series of Workshops” in the Desert Sun, August 6, 1966 (a year prior to moving into Chautauqua House). AIHS’s program of workshops for educators took place in five areas of California and were the first of its type in the nation.

Led by Henry-Costo, the AIHS forwarded this activist mission by publishing Wassaja (pronounced Washssah-ha) starting in 1973, one of the first national American Indian newspapers with original content. “Wassaja is a signal for self-determination, a signal for the Indian to carry on his own fight for the right to decide his own life today, his own destiny tomorrow,” the Costos said in a lead editorial.5

Author Kent Blansett noted how 1451 Masonic was significant to the “Red Power” movement of the 1960s, particularly to its educational agenda: In May of 1969, [Richard] Oakes led a committee meeting to create a seminar with the title ‘The American Indian in an Era of Social Change.’ Members of the committee who gathered at the Chautauqua House on Masonic Avenue (home to the American Indian Historical Society) included educators, other community members, and students from campuses around the Bay Area.”6 Oakes was a prominent Red Power Movement figure, leading the 1969 Occupation of Alcatraz and the first Native American Studies Department at San Francisco State University, as well as influencing major positive changes in federal Indian policy and leading successful tribal land return efforts. 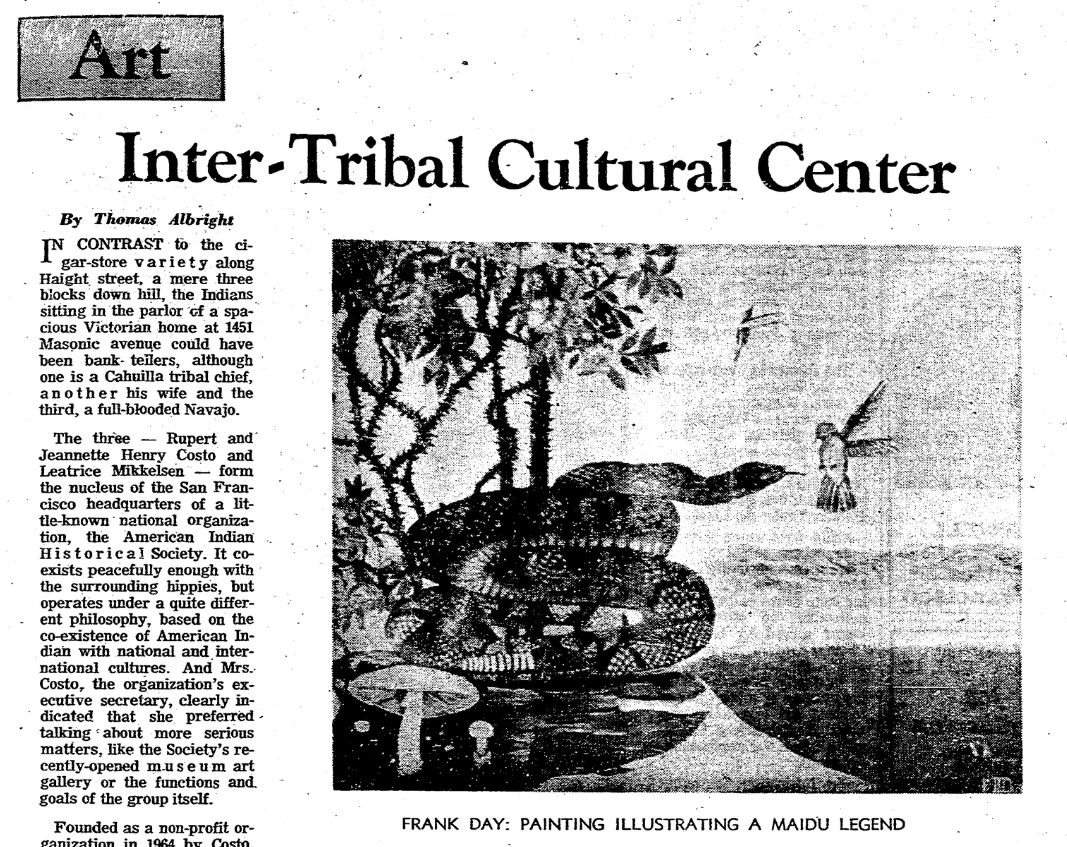 A San Francisco Chronicle piece from September 1967 reviewed AIHS’s inaugural exhibition of Native artist Frank Day, noting that his work was “rendered with a combination of ‘naive’ detail and sophisticated compositional devices,” and “qualify him as one of the more engaging ‘primitives’ who have recently come to light.”

The society also committed to American Indian art and artists by providing a physical gallery space and informative exhibitions of significant California Indian artists such as Frank Day. Said Leatrice Mikkelsen, director of AIHS’s museum: “We hope to show the best of two cultures—Indian culture and what it has received from national and world culture.” Added Henry-Costo, “The talent among American Indians is enormous—they have an affinity with nature, imagination and desire to give of themselves. If we encourage them, i’m sure they will come out of the woods.”

Through its exhibitions and publications, the AIHS sought to inform and promote mutual understanding between American Indians and non-Natives. The AIHS’ philosophy centered on the belief that American Indians could, through their own initiative and innovation, lead the fight in American Indian affairs. While AIHS did not initially see their work as “activist,” the continued cultural existence of an organization for American Indians in the twentieth century was in a way a political declaration, since former governmental policies sought to eliminate and destroy American Indian cultures.

By the early 1980s, many Society members had left the organization, some for personal reasons, while others joined different organizations and continued activist work in other areas. In addition, several of the core early members had passed away and foundation money, central to the regular functioning of the group, began to dry up with the changing tide of the national economy.

The Costos remained committed to their important work but began to slow down with the advancement of their ages. Regularly scheduled publications disappeared, and AIHS formally ceased operating in 1986 with the failing health of Rupert Costo. That year, AIHS sold Chautauqua House. The sale of the property allowed the Costos to endow an academic chair in American Indian Affairs at the University of California, Riverside (UCR), at the time only one of three in the nation. In addition, they donated to UCR their library of 15,000 books, treaties, legal documents, prints, and paintings focused on American Indians.

In one of the final AIHS board meetings in April 1988, Costo said that “the aims of the Society had been met,” and “over the years the Indian tribes had taken up pursuit of similar goals.”