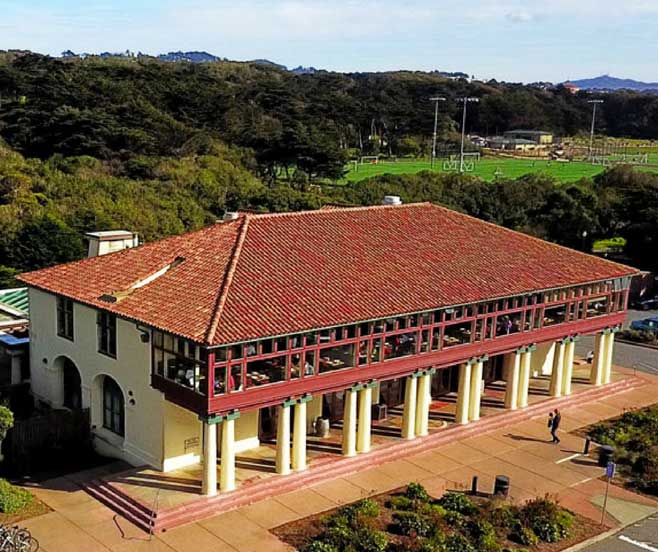 Golden Gate Park turns 150 years old this year, and while organized anniversary events and celebrations have been quashed in the COVID-19 crisis, hundreds of San Franciscans are rediscovering their park on social-distanced walks and bicycle rides. The park is a National Register-listed Historic District and holds two-dozen designated City Landmarks and points of interest, from windmills to statues to sundials.

The Beach Chalet, City Landmark #179, faces the Pacific Ocean from the western edge of the park and stands as the last project of renowned San Francisco architect Willis Polk. Constructed in 1925 by the Park Commission as a place of refreshment for beach-goers, the chalet replaced a predecessor structure that stood on the ocean side of the Great Highway.

Polk gave the concrete Spanish-Revival building a grand colonnaded veranda on its ground floor with a “Moorish reception room,” restrooms, changing rooms, and a lunch counter inside. Upstairs, a 200-seat restaurant offered a full bank of ocean-facing windows. The $75,000 building, 150-feet-wide and 80-feet-deep, opened on May 30, 1925.1 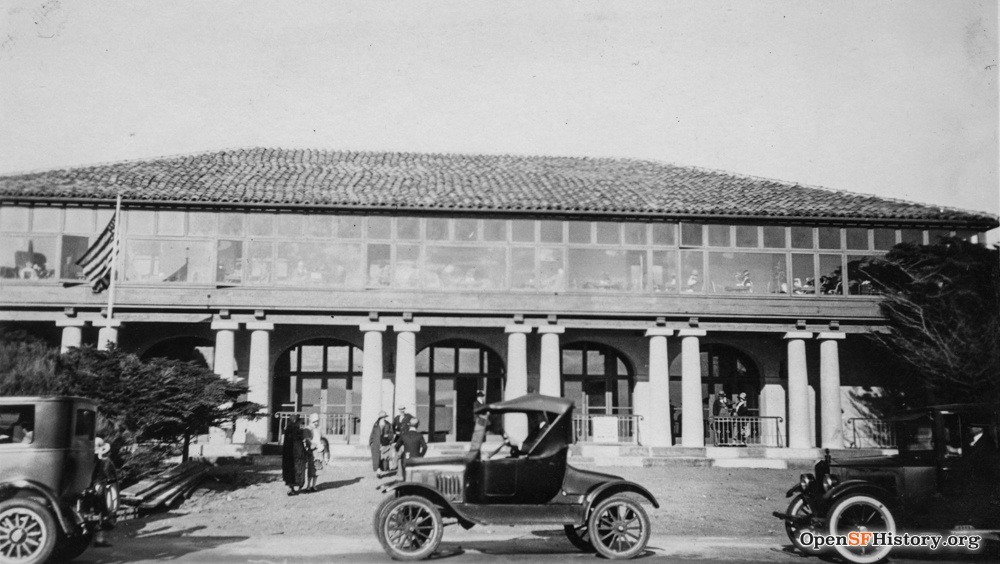 Initially managed by the Park Commission with a “steward” and assistant in charge, the Chalet had cards and games available to use in the reception room until 7:00 p.m. nightly and was a venue for bridge teas, receptions, and school fundraisers.2

But the Chalet was a money-loser for the Park Commission with frequent calls to close it.3 From 1929 to 1935, operations were contracted out to sisters Hattie and Minnie Mooser in hopes of turning the financial situation around.4 The Moosers were prominent after-theater hostesses at the Aladdin Studio downtown—hailed as the city’s first tearoom and night club—and were reported friends to “countless personages the world over, as well as hundreds of newspaper and theatrical people,” and “known to thousands of college students and graduates throughout the Bay Area.”5 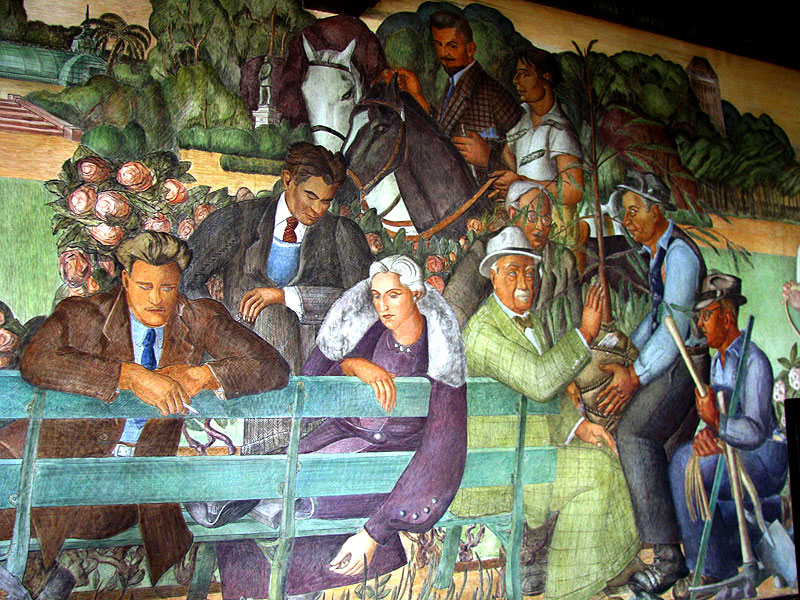 The U.S. Army Corps of Engineers used the building as its coastal defense headquarters during World War II, but in the 1950s, the chalet was home to rumored lewd shows, gambling, and men’s “smokers.” Its reputation did not improve much from the 1960s into the early 1980s as a bar leased to a local chapter of the Veterans of Foreign Wars. For years the building was shuttered as various proposals, plans, and unfulfilled contracts came and went. 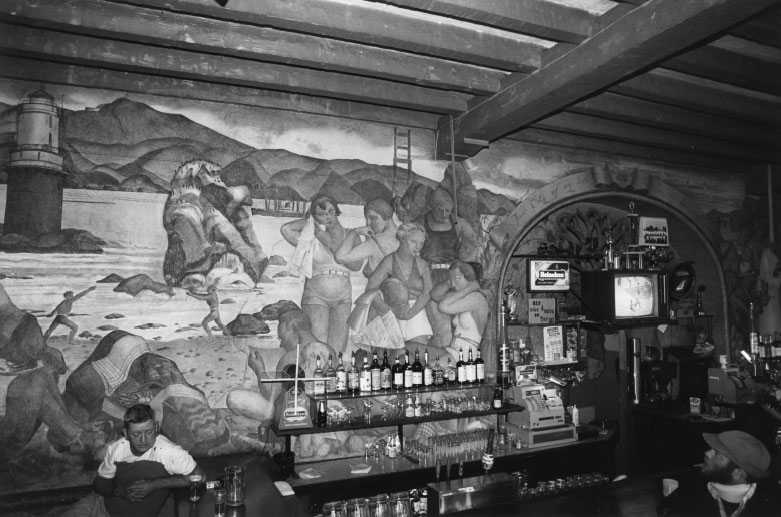 The building may have been lost if not for the action of preservationists. In 1985, the city’s Landmarks Preservation Advisory Board (LPAD) recommended landmark designation for the Beach Chalet specifically because of fears that in neglect it would deteriorate beyond repair, fall victim to arson, or be demolished as a safety hazard.5 The Board of Supervisors made the Beach Chalet City Landmark #179 and the building with its artwork was also added to the National Register of Historic Places.

In 1993, the San Francisco Recreation and Park Department received a $700,000 federal grant to rehabilitate the Chalet and restore the Labaudt murals, and finally one of the many proposals to reopen the historic building to the public came together. Lara and Greg Truppelli opened their Beach Chalet brewpub on the second floor in late 1996, and a visitor kiosk and historical exhibit around the murals downstairs activated the ground floor. The Truppellis later opened an annex restaurant, Park Chalet, at the rear of the building, where most weekends the back fronting the park is the scene of locals having brunch while children play on the small lawn. 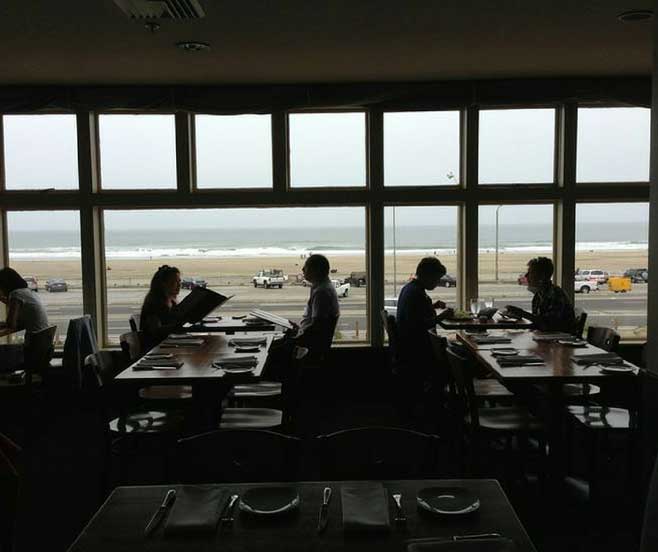 I am making a list of all the places closed to me now that I am resolved to visit and appreciate the moment shelter-in-place restrictions are limited. Today, I encourage you to take in Willis Polk’s temple-like design for the Beach Chalet, but make plans to return post-pandemic for the murals, the fantastical staircase, and a beer with a view.