When Arthur “Monk” Young hired Agostino Giuntoli as a cook for his nightclub, he had difficulty pronouncing the young man’s name. Young resorted to the nickname “Bimbo,” a diminutive version of the Italian word for boy, bambino. The name stuck to Giuntoli, who was called Bimbo—and even Mr. Bimbo—long after his boyhood and into his years as the best-known nightclub host in San Francisco.

Recognized by San Francisco Heritage in 2014 as one of our 100 Legacy Bars and Restaurants, Bimbo’s 365 Club at 1025 Columbus Avenue this year has been nominated with Heritage’s assistance and support to the San Francisco Legacy Business Registry. Still run by family members 27 years after Agostino “Bimbo” Giuntoli’s passing, the club’s allure of sophisticated decor invokes nights of dinner theater, dance palaces, and black-tie dress codes. 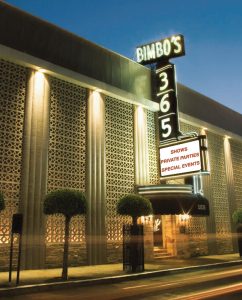 The 365 Club began life in 1931, run by Giuntoli and Young on the third floor of a building at 365 Market Street near the southeast corner of Fremont Street. The address may have inspired the decision to be open year-round, as later advertisements promoted “open 365 days,” and in later years “The World’s Best Dinner” was offered at a starting price of $3.65. A typical evening would see the club open at 5:00 p.m. for cocktails, dinner beginning at 6:00 p.m., dancing starting at 7:00 p.m., and performances by show girls, singers, comedians, and other vaudeville acts at 8:00 p.m., 10:00 p.m., and 1:00 a.m. If that wasn’t enough, there were backroom gaming tables for those in the know. Researcher Barrett Reiter describes the club in its Prohibition years as a speakeasy that “navigated the fine line between legal entertainment and illegal alcohol and gambling, surviving periodic raids.”

Giuntoli bought out his partner in 1936, and became the prominent face of the business now called “Bimbo’s 365 Club.” In 1939, the racy nightlife travel guide Where to Sin in San Francisco, identified Bimbo’s as “The Complete Hot-Spot,” and previewed the satisfactions to be found within: “You’ll like the food, which is superb, because it was cooked by Bimbo. You’ll like your drinks because they’re good. You’ll like the Girl-in-the-Fish-Bowl because she’s very naked. You’ll like the show, because it had been imported from Hollywood, with a full quota of wild, beautiful women with long legs…”

The “girl-in-a-fishbowl” is a reference to Bimbo’s unique attraction. Behind the club’s bar a tiny living “mermaid” floats in a small aquarium grotto, an illusion relying on mirrors, a basement set, and models employed to take on the character of “Dolphina.” The gimmick moved to Columbus Avenue with the club and has remained an enduring attraction. Mermaids are etched into mirrors and windows, appeared in ads and on cocktail napkins, and in the club lobby a statue by Italian sculptor Cesare Viviani celebrates the Dolphina character in white marble. 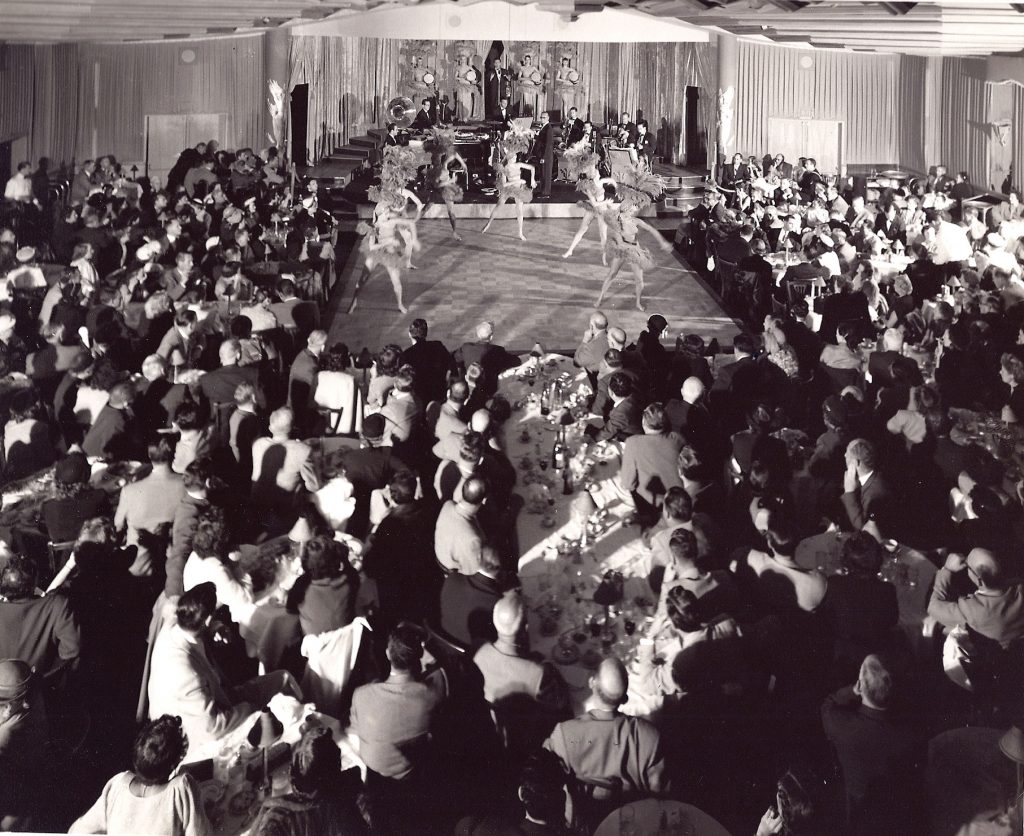 In 1951, Bimbo’s 365 Club left Market Street to take over an Art Deco building designed by master architect Timothy Pflueger for the former Bal Tabarin nightclub (1931-1950) at 1025 Columbus Avenue on the corner of Chestnut Street. The new neon marquee, emblazoned with “Bimbo’s 365,” became an icon of city nightlife and an informal landmark of the North Beach neighborhood.

Supper clubs, with their bands and live shows, declined in popularity in the 1960s, and Bimbo’s’ last night with nightly dinners and shows open to the public was New Year’s Eve 1969. San Francisco Chronicle columnist Herb Caen wrote a eulogy to the business model:

“[T]he 365 is/was a true nightclub in a style we will never see here again. Chorus girls! The first local live nudie–“The Girl in the Fishbowl.” Jugglers, dance teams, standup comics, crooners, chantoosies, Stage Door Johns, a proper band in proper uniforms and a leader with a baton long enough for the Symphony. Multi-course dinners, Red Cap Sparkling Burgundy in the silver bucket, and a nice-bucketed lady in a silver fox stole topped by a gardenia bought from the “pro” in the men’s room. All over, done for.” 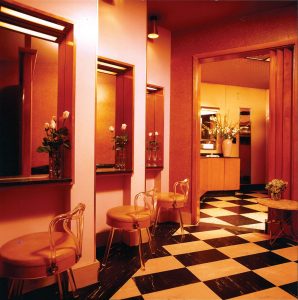 But Bimbo’s wasn’t quite finished. Under the stewardship of Bimbo’s son-in-law Graziano Cerchiai, the club transitioned to become a rental venue for concerts and private functions. In the 1980s and 1990s, Bimbo’s provided a home for stand-up comedy recordings, the nascent San Francisco Jazz Festival, the Tattoo Ball, Acid Jazz and Swing-Dance movements, and musicians who would go on to worldwide fame and acclaim such as Adele, Beck, the White Stripes, Erykah Badu, Fiona Apple, and Gloria Estefan. Today, Agostino Giuntoli’s grandson Michael Cerchiai oversees the nightclub his grandfather opened 88 years ago.

The Bimbo’s building at 1025 Columbus Avenue is listed as a historic resource by the San Francisco Planning Department, but is not a city-designated landmark, nor is it on the National Register of Historic Places or the California Register of Historic Resources. Based on findings in a 1984 survey of North Beach conducted by the Planning Department, it appears to be eligible for local, state, and national designation.

With research commissioned from architectural historian Barrett Reiter, Heritage has assisted in nominating Bimbo’s 365 Club to the San Francisco Legacy Business Registry and will strongly support its listing.

Interior of Bimbo’s 365 Club, by Christopher Michel For the first time in our 49-year… Read More