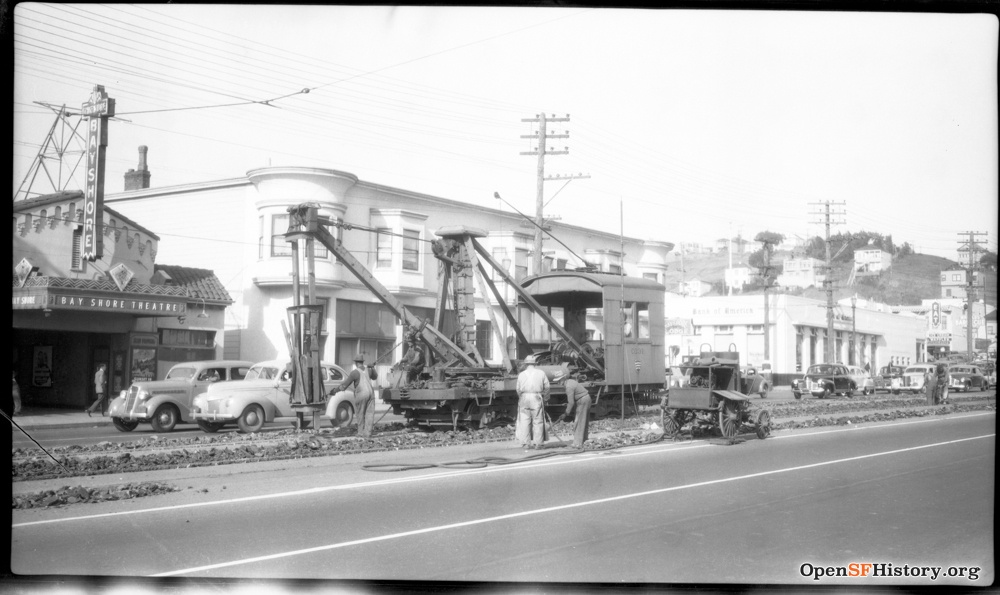 Bayshore near Leland 1943. Bayshore Theatre visible on the left. Known affectionately as the “Flea House,” the theater brought movies to Visitacion Valley in 1926. There were 350 seats, where patrons could enjoy double bills and collection a dinner set just by attending the weekly “dish night.” OpenSFHistory/wnp14.1703

Although it is true that the enclave east of Bayshore Boulevard is called Little Hollywood (and no, we don’t definitively know why, although we have plausible theories), there is little connection between the glitz of Southern California and its Visitacion Valley namesake. However, two local venues did provide welcome entertainment to residents during the 20th century.

First there was our neighborhood nickelodeon, so named because these small, simple theaters with hard wooden seats charged five cents for admission and flourished from about 1905 to 1915. Our local spot, with its fireproof sheet metal walls embossed with designs, is now a private home just east of Hans Schiller Plaza’s Raymond entrance. A player piano and a blue mercury light out front drew in an eager audience on “show nights.”

The purported location of Visitacion Valley’s old nickelodeon, at 135 Raymond Avenue, in a 1908 wood frame building that is today a private residence.

Then from 1926 until October 1957 the Bayshore Theatre with its 350 seats thrived, showing double features and sponsoring promotions such as the opportunity to collect your dinnerware set by attending the weekly “dish night.” In 2011 then-87-year-old Mary Glidden Bertram shared her youthful memories of the “Flea House”:

Every Saturday we would go watch the “serials,” which would continue week to week like a soap opera on TV nowadays.

When I was a student at City College of San Francisco I needed a part-time job. I became the candy girl at the Bayshore Movie House. Weekend matinees were the busiest with parents dropping off their kids. They had money to burn and bought candy and popcorn. It’s a wonder I don’t have more fillings, as I ate more than my share. There was also a small counter serving food adjacent to the lobby. 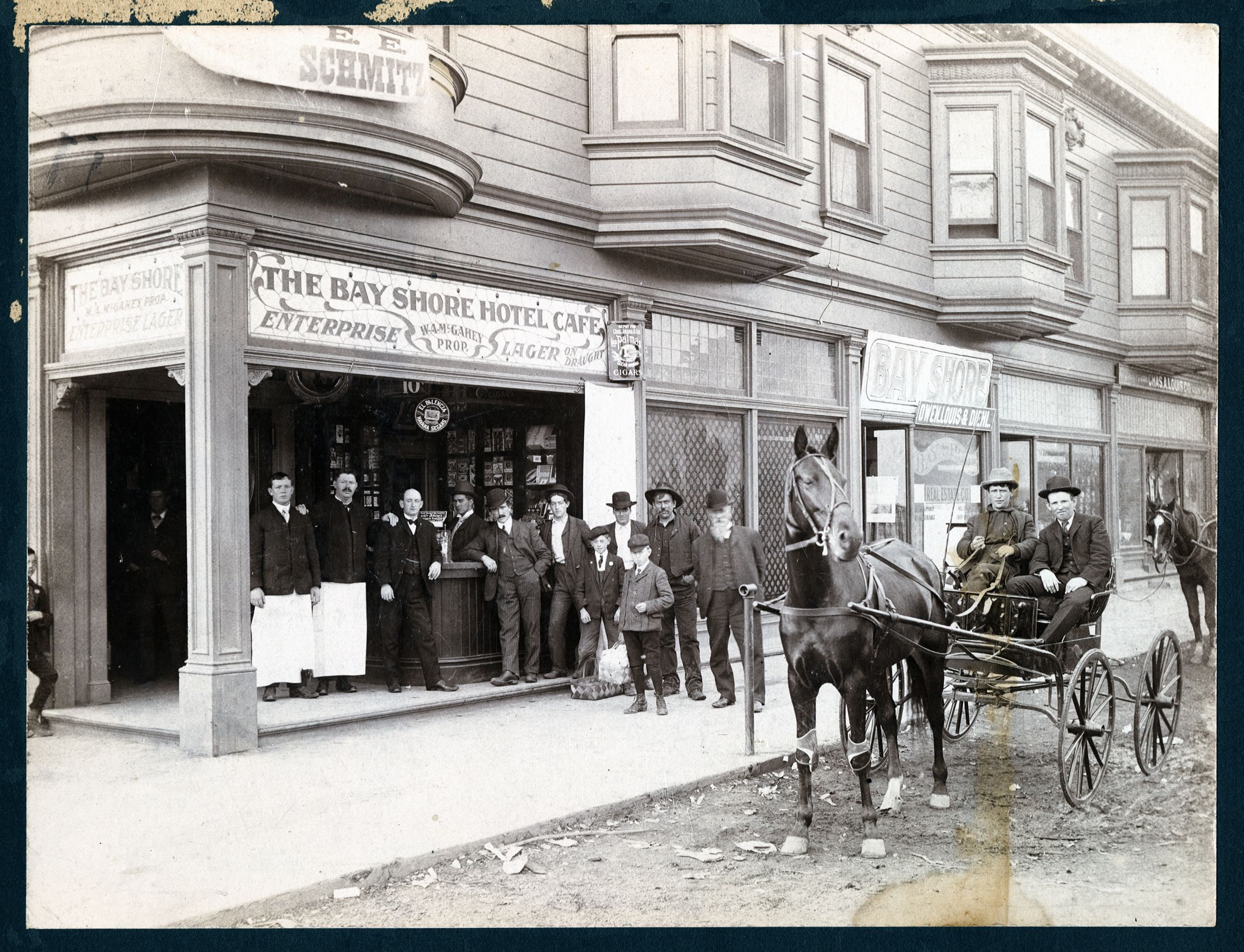 But movies weren’t only shown in Visitacion Valley; we believe at least one silent film was made here. Alma Taylor, who was born in 1911, remembered going down to “Hub Nutter’s store” (the ground floor of the Bayshore Hotel at the corner of Bayshore and Leland) to watch Swedish-born superstar Anna Q. Nilsson in action. Although Alma remembered it as being “Ten Nights in a Bar Room,” it seems more likely that the silent movie in question was the 1924 “Half-A-Dollar Bill.”

Casa Bahia Loma, at the corner of Blanken and Tocoloma in Little Hollywood, has a connection to actress Mae West.

Another famous blond beauty, Mae West, has also been linked to Visitacion Valley. According to local lore, the Little Hollywood home at the corner of Blanken and Tocoloma has a connection with her. Some say she once owned it, others say she visited there when the train between Los Angeles and San Francisco made its stop at the Bayshore Station – or perhaps the story arose because a proven home owner, Julius Kerber, brewmaster of Lucky Lager beer, had a buxom blond wife! Who knows? But it makes for a good local story! 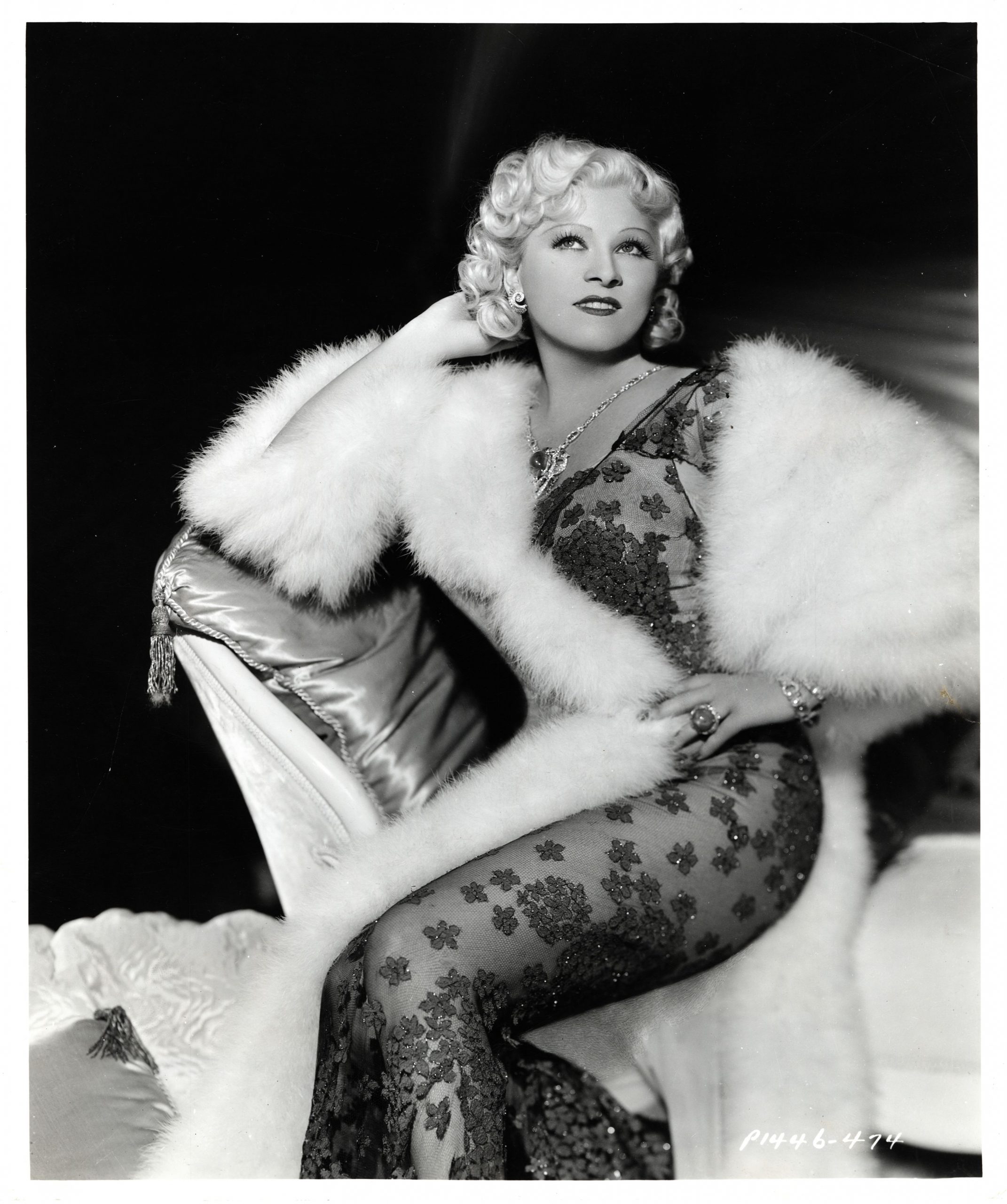 Although we don’t know of any modern movies made here, the Valley has appeared in certain scenes, albeit briefly:

A clip from “The Lineup” filmed around Visitacion Valley.

One day my family and I were watching the 1958 movie “The Lineup.” In one scene, a young man is driving a car. At first, our attention was drawn to the car. It was a 1957 Plymouth. That was the same year and make as the car we owned. Then our eyes were riveted. In the background was Little Hollywood. A change of the camera angle brought the Cow Palace into view. It was obvious to all of us that the scene was filmed at the Bayview Motel, which was located immediately to the north of Little Hollywood.

1968 – “Bullitt” – Starring Steve McQueen. Noted for its extensive use of actual San Francisco locations – and especially for the exciting car chases throughout the city, including one along Mansell, the northern boundary of Visitacion Valley.

Can you spot the then-newly built Geneva Towers in the background?

1971 – “Harold and Maude” – The quirky comedy/drama starring Ruth Gordon and Bud Cort – The scene below was shot at the Southern Pacific Rail Yard at the Brisbane/San Francisco County line.

A short clip at the SP rail yard.

There’s one more memorable scene filmed here, albeit uncredited. A woman on one of the Visitacion Valley walking tours a few years back told us of growing up in the neighborhood and how her dad was an engineer at the landfill “dump” (today’s Recology). One day a “famous movie director” approached the managers, asking to be allowed to film the birds that cluster there flying against a white backdrop when a dynamite charge was set off. Permission was granted and you can surely guess the director’s name – Alfred Hitchcock – and the 1963 movie – “The Birds”! Check out the opening sequence with the credits rolling and the avian flock swirling.

And, as they say in the film industry, that’s a “wrap” on our stories of the Visitacion Valley-movies connection.

By Kerri Young Just as Visitacion Valley currently has no landmarks within its borders, it… Read More

The exterior of 2 Hahn Street in Visitacion Valley. By Kerri Young For this Fun… Read More