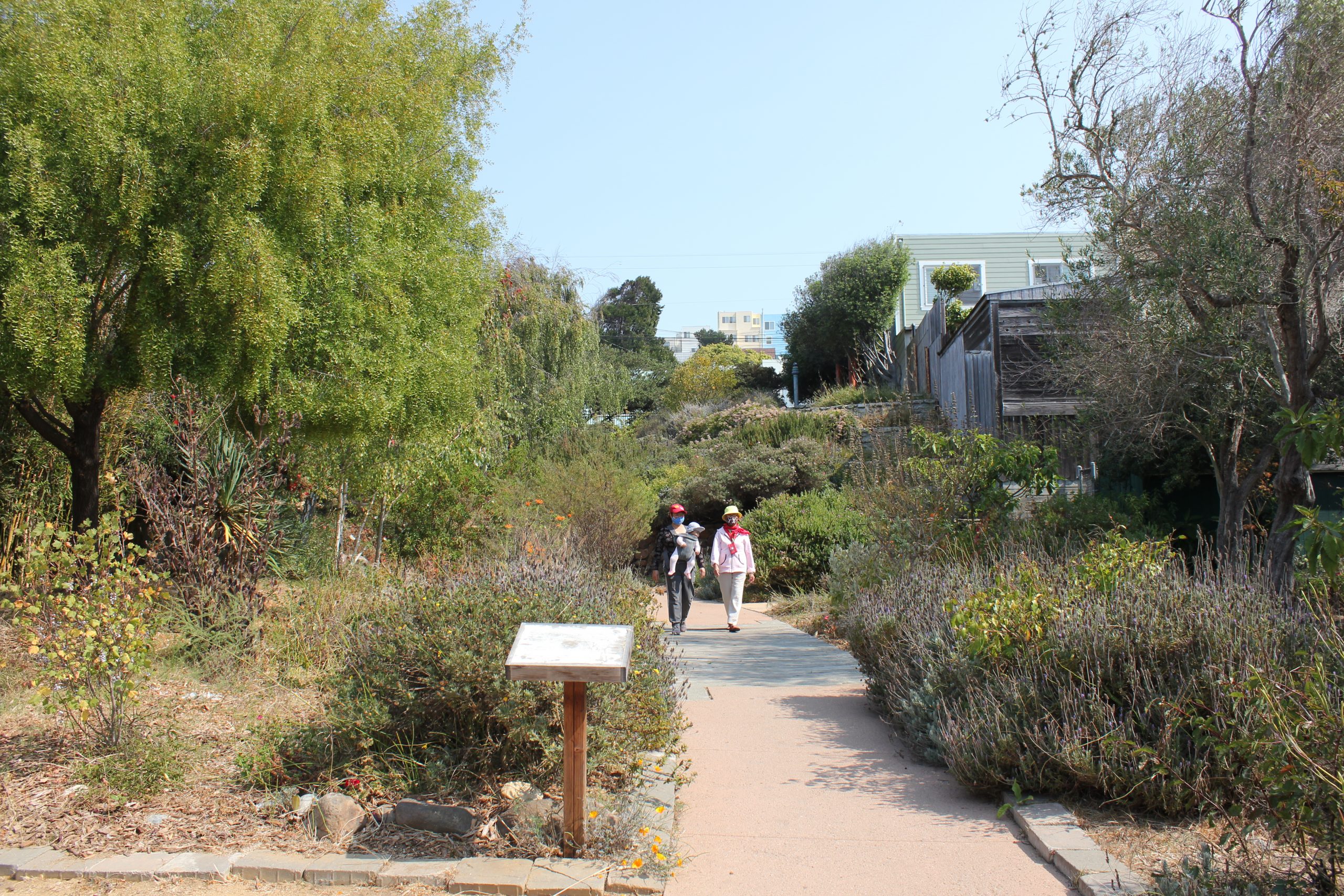 A family walks in the Herb Garden of the Visitacion Valley Greenway, Sept. 3, 2021. Heritage photo.

Welcome to Visitacion Valley Month for Heritage in the Neighborhoods! Throughout the month of October 2021, we will spotlight the local architectural styles, legacy businesses, and cultural cornerstones in this south-eastern San Francisco neighborhood, followed by conversation and shared strategies for defending historic resources. Many thanks to the team at the Visitaction Valley History Project, who we are partnering closely with on this special month. 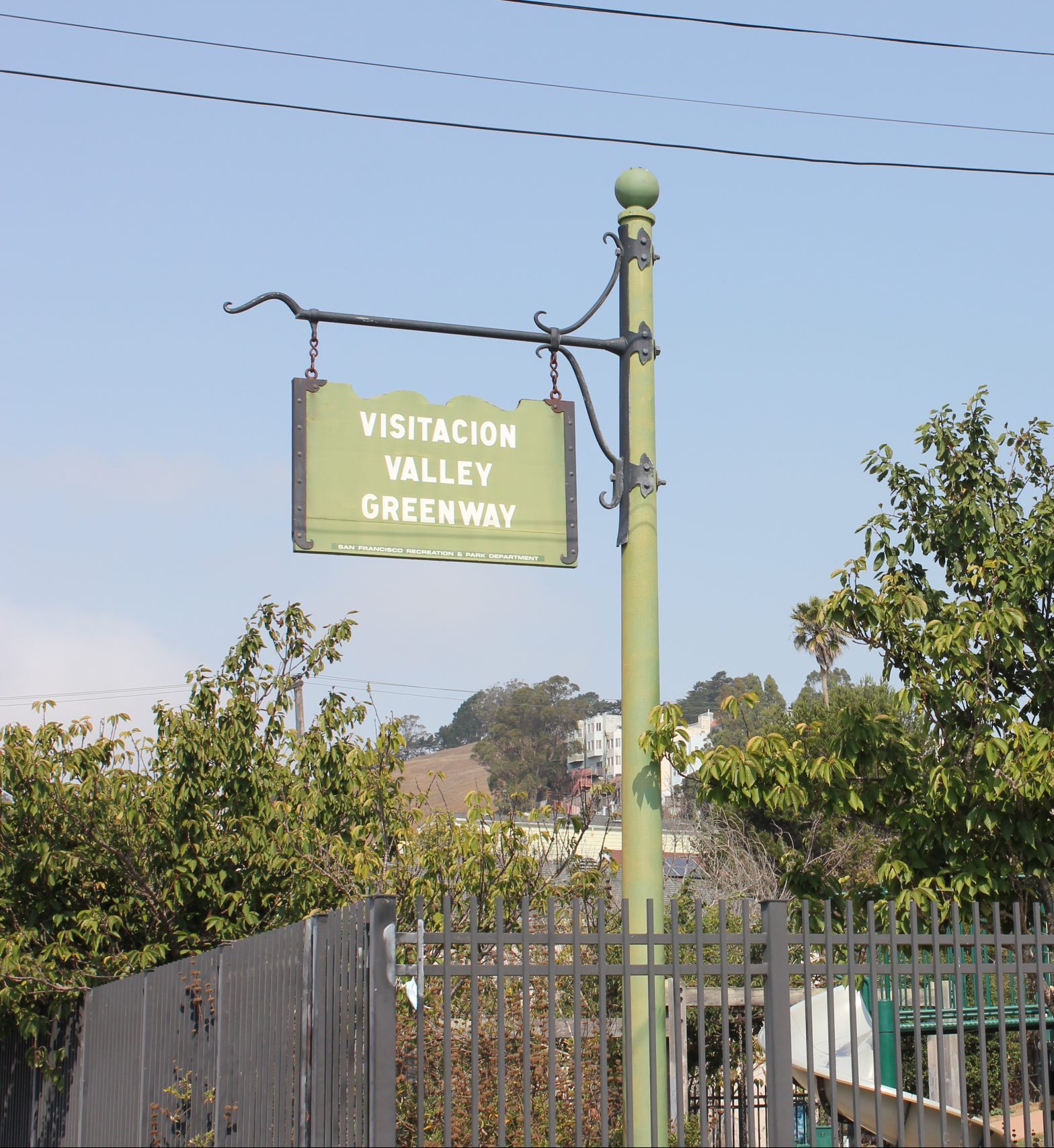 We are kicking off the month with a look at some of Visitacion Valley’s iconic open spaces and trails. First up is the Visitacion Valley Greenway, a series of six contiguous parks that spill down the hillsides on a former SF Water Department right-of-way. The Greenway is a vital open space running through Visitacion Valley’s residential neighborhood, and functions as an outdoor classroom, a place for neighborly interaction, and a green corridor.

The Greenway is a result of over 25 years of collaboration between community members (as the Visitacion Valley Greenway Project), the San Francisco Recreation and Parks, and the Trust for Public Land. Each of the Greenway’s parks are a block long near Rutland Street, and contain community gardens, playgrounds, and local artwork. The land is owned by the Public Utilities Commission (PUC) and managed by Recreation and Parks, the Greenway Project (also called Visitacion Valley Greenway (GOAL), and a dedicated team of community volunteers. 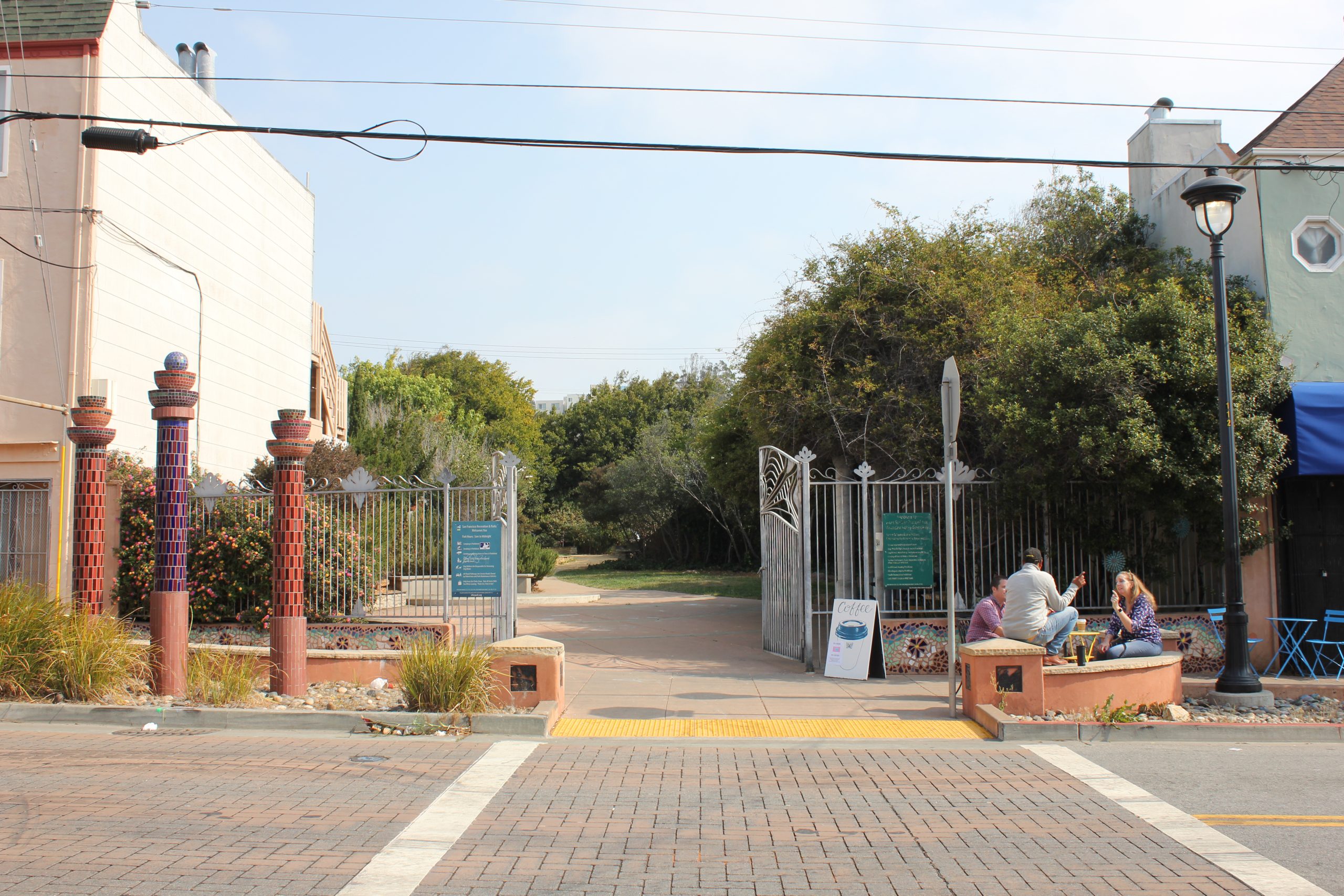 Entrance to the Visitacion Valley Greenway, on the corner of Leland and Peabody streets. Heritage photo.

The original goal of a Greenway was to promote a sense of community and empowerment among the community’s culturally diverse residents and foster a healthier environment. The Greenway Project promotes outdoor education and has nearly completed a Solar Kitchen at the Community Garden to facilitate outdoor classes in food preparation and various other subjects. More recently, it raised funding and is leading the construction of the McLaren Park Native Plant Garden, which is located in Visitacion Valley and will be an outdoor education center.

The SF Parks Alliance profiles Anne Seeman, one of the leading forces behind the Greenway. 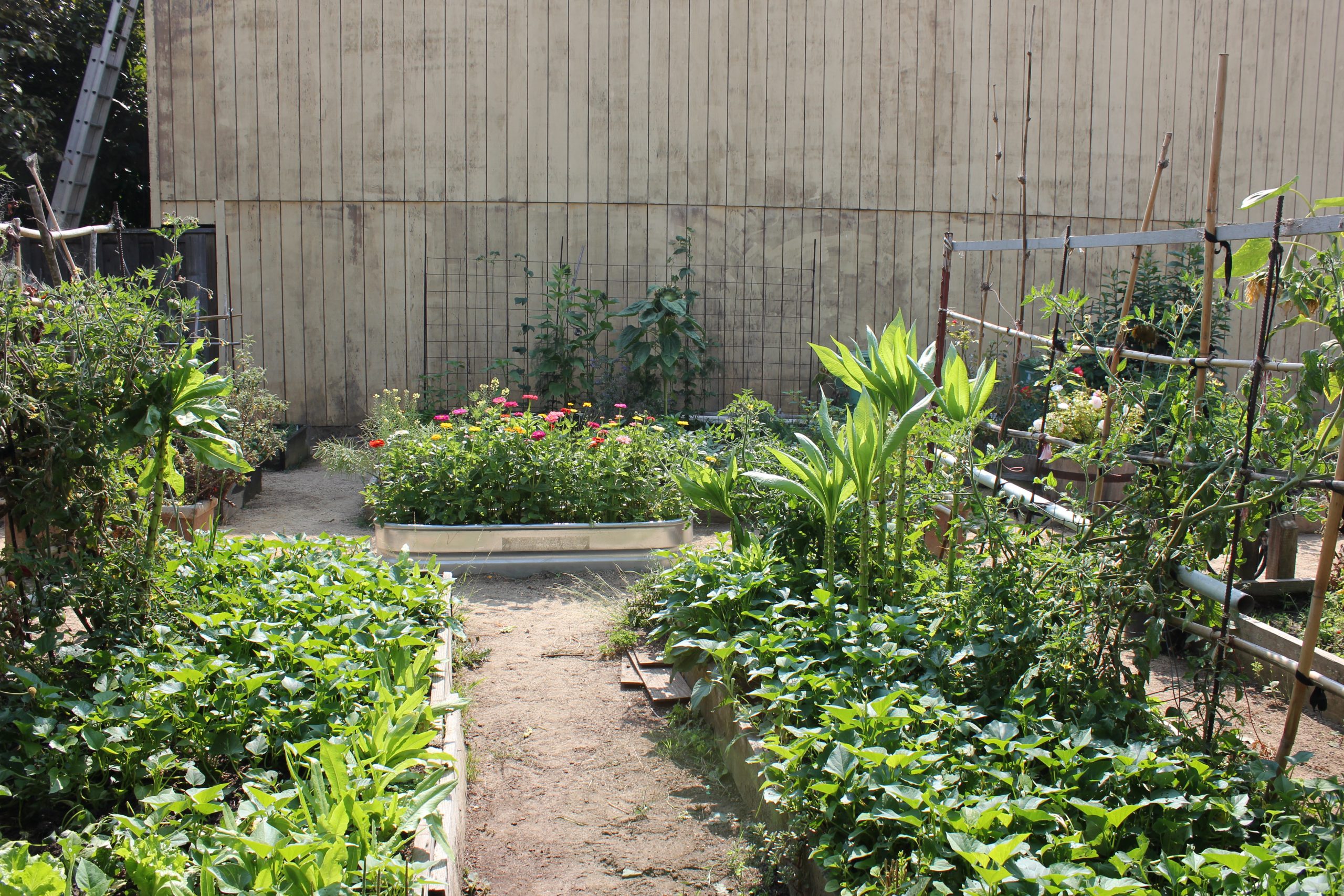 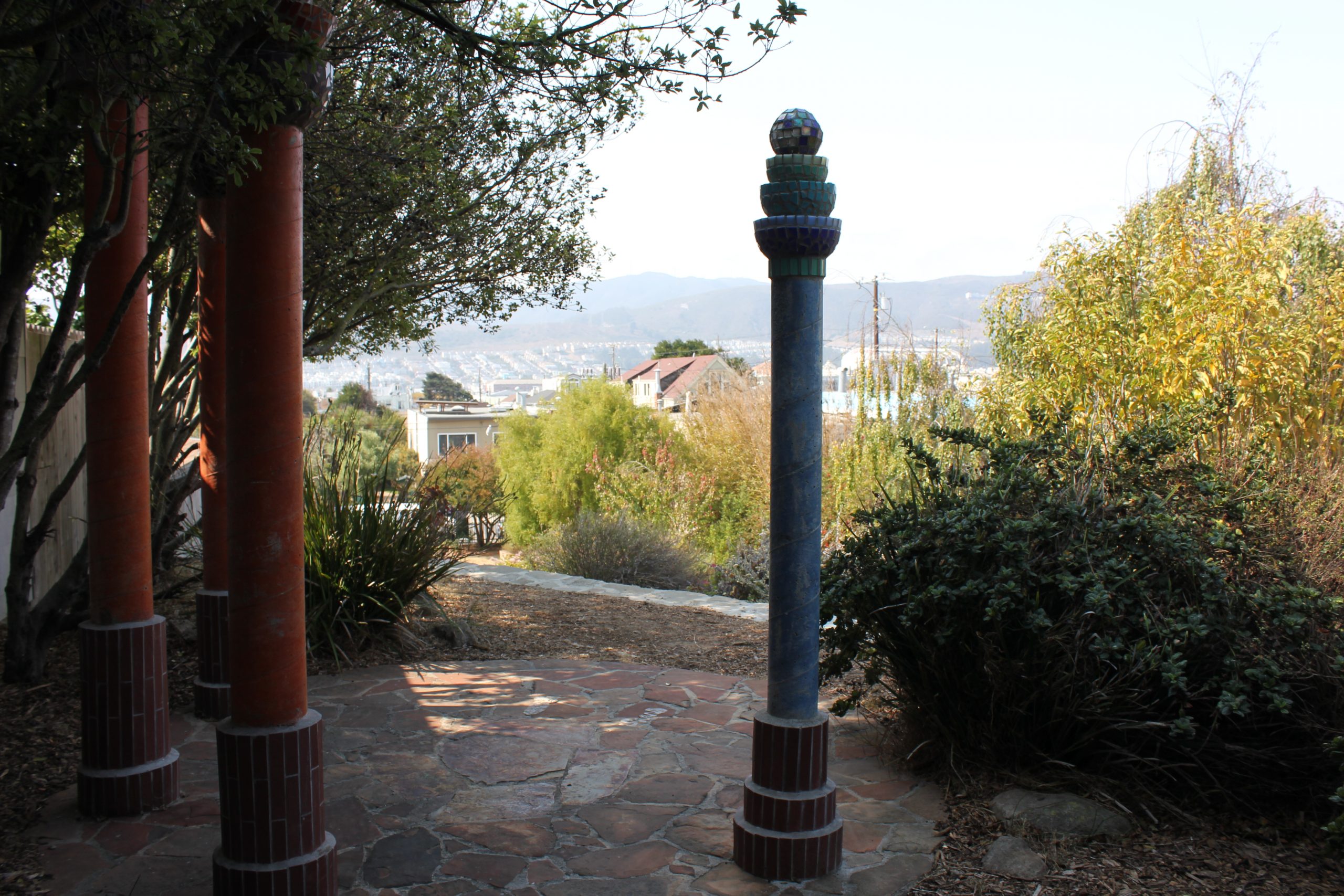 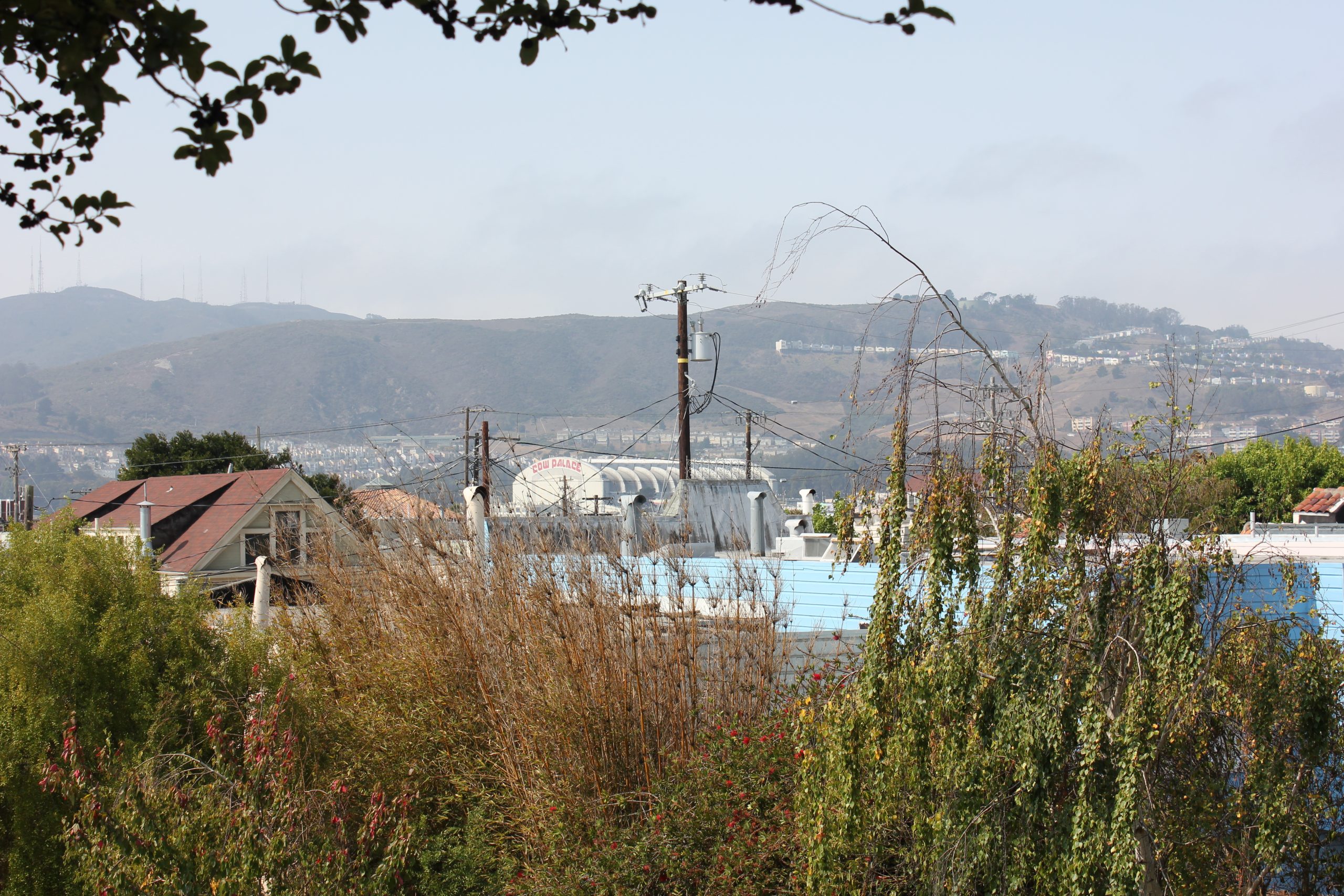 View of the Cow Palace from the Herb Garden on the Visitacion Valley Greenway. Heritage photo.

You cannot visit Visitacion Valley without noticing the hills of McLaren Park, whose southern half borders the neighborhood. Like the Greenway, this open space (San Francisco’s second largest park) is a fixture in the daily lives of neighborhood residents. While the park offers picnic areas, playgrounds, a golf course, baseball diamonds, an indoor swimming pool, a small redwood grove, a concrete amphitheater, and dozens of other features, Philosopher’s Way is one of its more unique features. 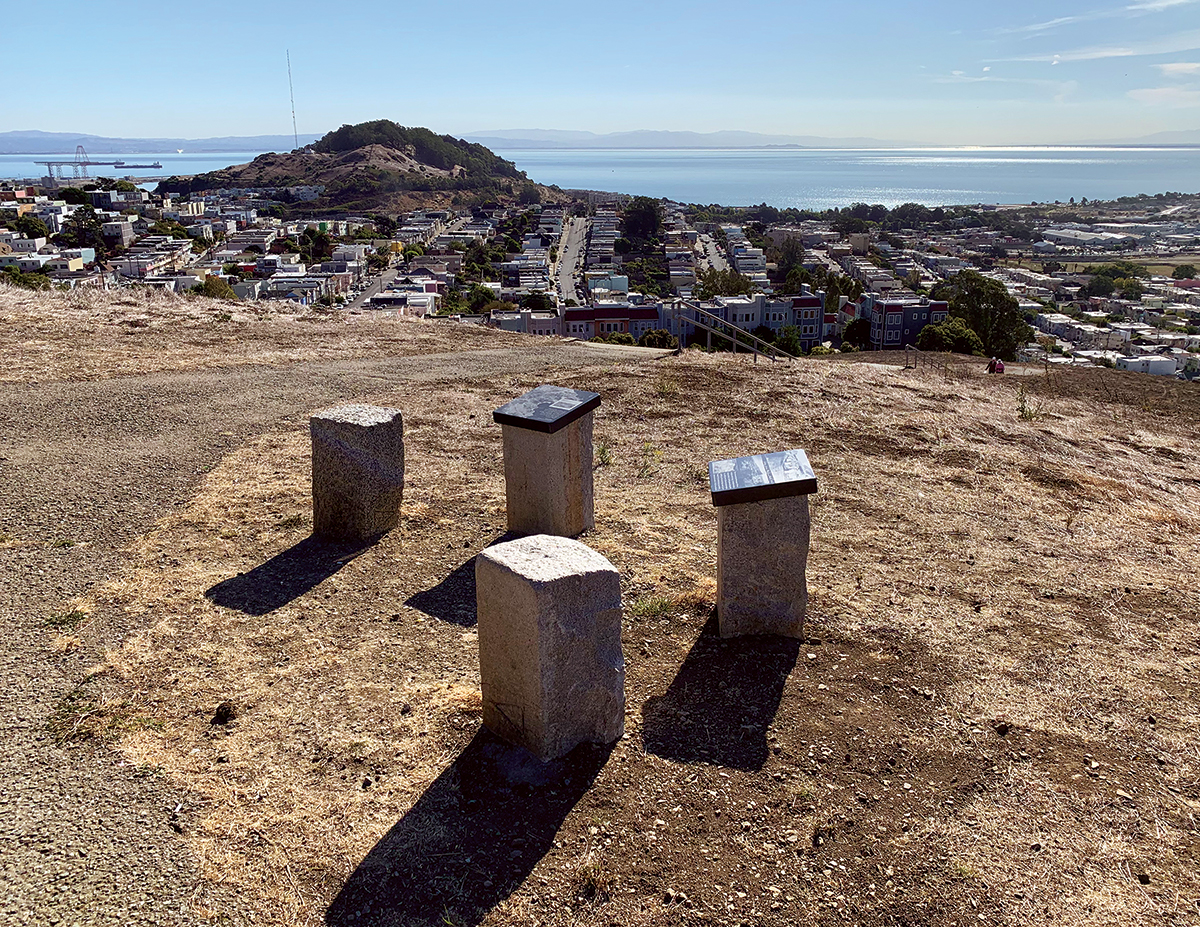 Philosopher’s Way originated in 2009, when Rec and Parks partnered with both SF Utilities and the Arts Commission to launch a project to would make the McLaren feel safer and more inviting through public art. But rather than commissioning outdoor statues or sculptures, they created a 2.7-mile trail that pairs walking with philosophy. At the cost of $146,000 and thousands of hours from Parks and Rec staff  and volunteers, Philosopher’s Way was completed in January of 2013. 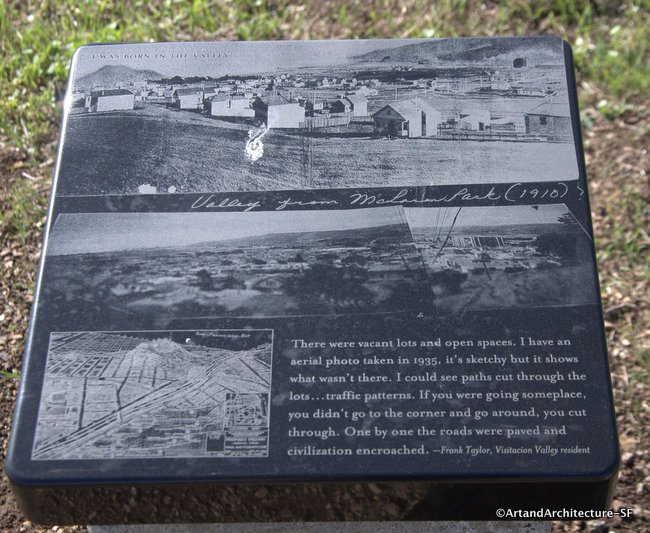 What makes the Philosopher’s Way a work of art and not just a hiking trail are a series of black stone plaques that artists Susan Schwartzenberg and Peter Richards call “musing stations.” They’re situated at fourteen scenic spots along the trail and give visitors insight into the natural and social history of the park and surrounding neighborhoods like Visitacion Valley. For example, at one site, Visitacion Valley History Project’s Betty Parshall tells a story of how workers from the pumping station down on Leland Avenue had to use flags to signal the opening and closing of the gates to the reservoir at the top of the hill. Another plaque contains a 1935 aerial photo and a musing from Visitacion Valley resident Frank Taylor. Each of these stations help visitors ponder both the view and their place in the deep history of the surrounding area.

Listen to this nice overview of the creation and intention behind Philosopher’s Way in KALW’s Crosscurrents program from 2019. 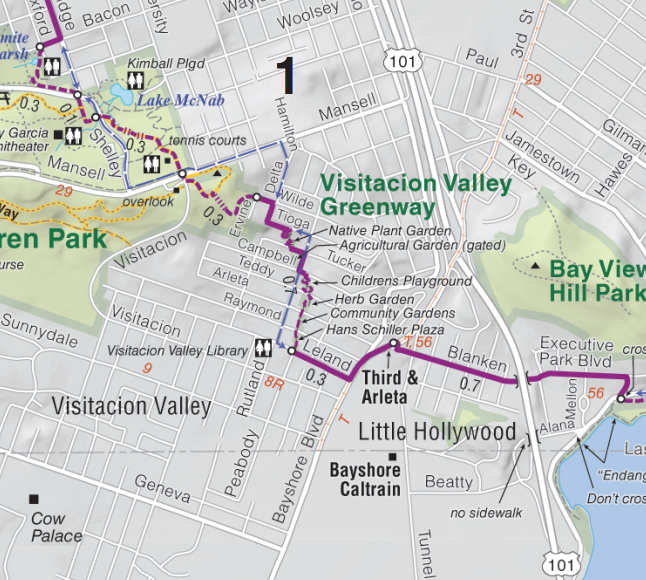 A section of the Crosstown Trail trail that includes Visitacion Valley and the Greenway.

The Greenway and Philosopher’s Way are prominent features of the southeastern half of the Crosstown Trail, a newly imagined hiking and biking route that cuts across 17 miles of San Francisco’s green spaces.

First proposed in the city’s 2014 General Plan as a way to connect natural parks to each other for an “urban wildlife trail experience,” the trail is the work of a small group of local volunteers promoting community and healthy adventuring outdoors. The route came together after over a year of committee meetings in 2018, and the trail opened, though without signs, in May 2019.

A group of hikers trek through the Visitacion Valley Greenway during the Crosstown Trail’s two-year anniversary in June 2021. Credit: Christopher Watros

The Crosstown Trail has been a wonderful way of bringing longtime city residents and newer transplants alike through Visitacion Valley neighborhood. To follow the trail, you can download the the OuterSpatial app or individual route descriptions—each including cues to help navigate the trail. Printable pdf maps are also available on the Crosstown Trail’s website.

We hope you will stop by the Valley and visit one of these special open spaces!