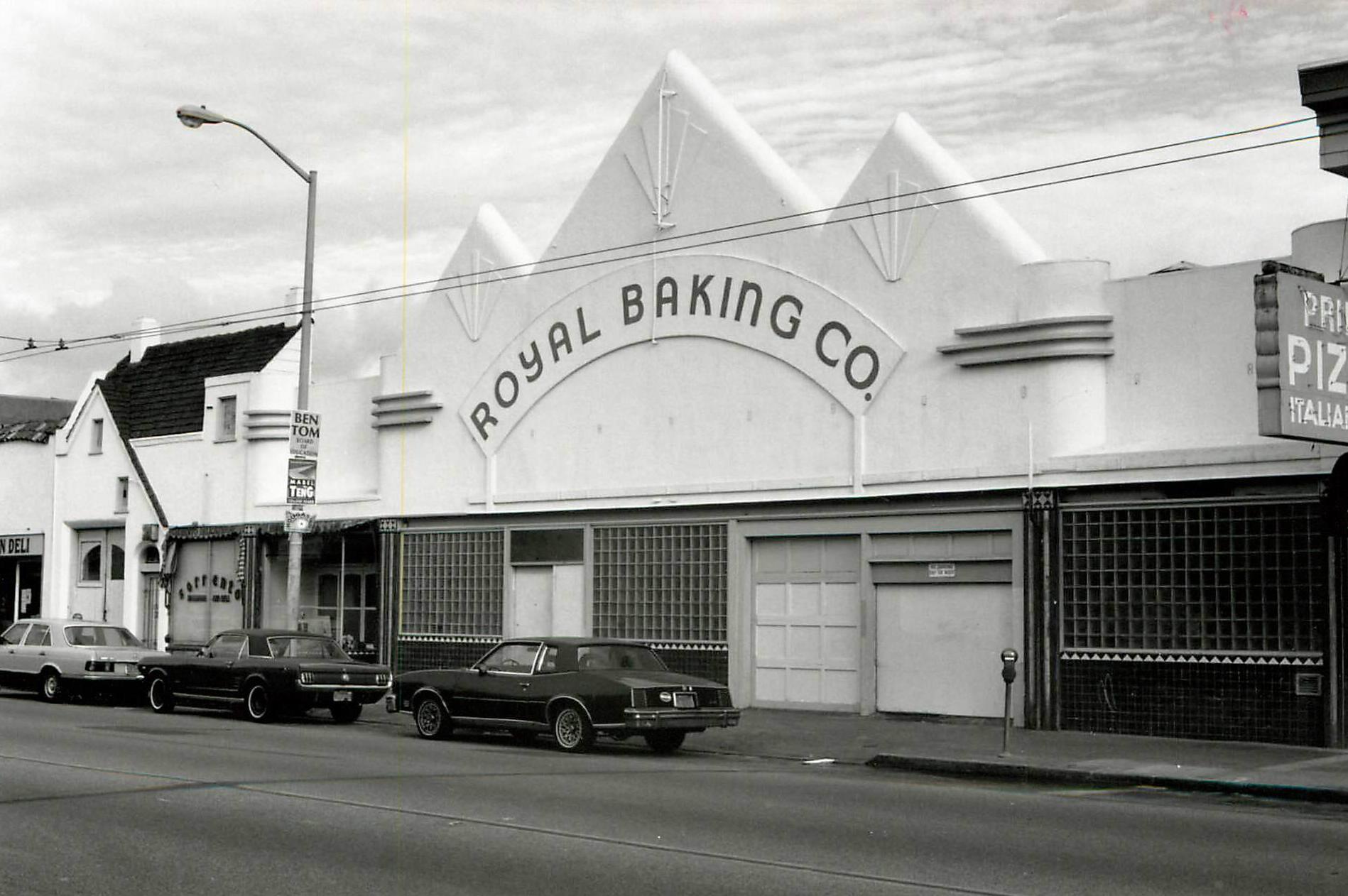 A version of this story appears in the January-March 2020 issue of Heritage News.

A New City Landmark Rises in the Excelsior
By Woody LaBounty

For 84 years, the Royal Baking Company building’s distinctive three-pointed parapet has ruled Mission Street as an abstract sunburst, a figurative mountain range, or, perhaps most appropriately, a metaphorical crown. Now the Excelsior District’s neighborhood icon, built in 1935, is on track for designation as a San Francisco City Landmark.

The Royal Baking Company property at 4769-4773 Mission Street between Russia and Persia Avenues appears from the front to be two separate structures, but is actually an unusual mix of commercial façade styles sharing a single building. Metapan Pupuseria, a Salvadoran restaurant occupying 4769 Mission Street, has a Storybook-style façade resembling a gabled country cottage with false chimneys, a shallow tiled-roof parapet, small-scale non-operable windows, and a rustic stone bulkhead. Next door, the New Royal Bakery at 4773 Mission Street occupies one bay of a larger Art Deco façade with green-and-yellow polychromatic terra-cotta tile and an upper register of molded banding, fanned reliefs, curved recesses, and the three-pointed parapet. In addition to the two storefront businesses, a plumbing company currently rents space in the rear of the building, which occupies all of the 100-by-108.5-foot lot.

In late 2019, the property was put on the market for $1.6 million as part of a probate sale. District 11 Supervisor Ahsha Safaí, concerned for its future, directed the San Francisco Planning Department to initiate a landmark designation. San Francisco Heritage co-authored the nomination. The Royal Baking Company building is significant not just for its unusual and distinctive architectural design but also for its connection to the Italian-American community and the history of San Francisco’s important bread-baking and macaroni-manufacturing industries. 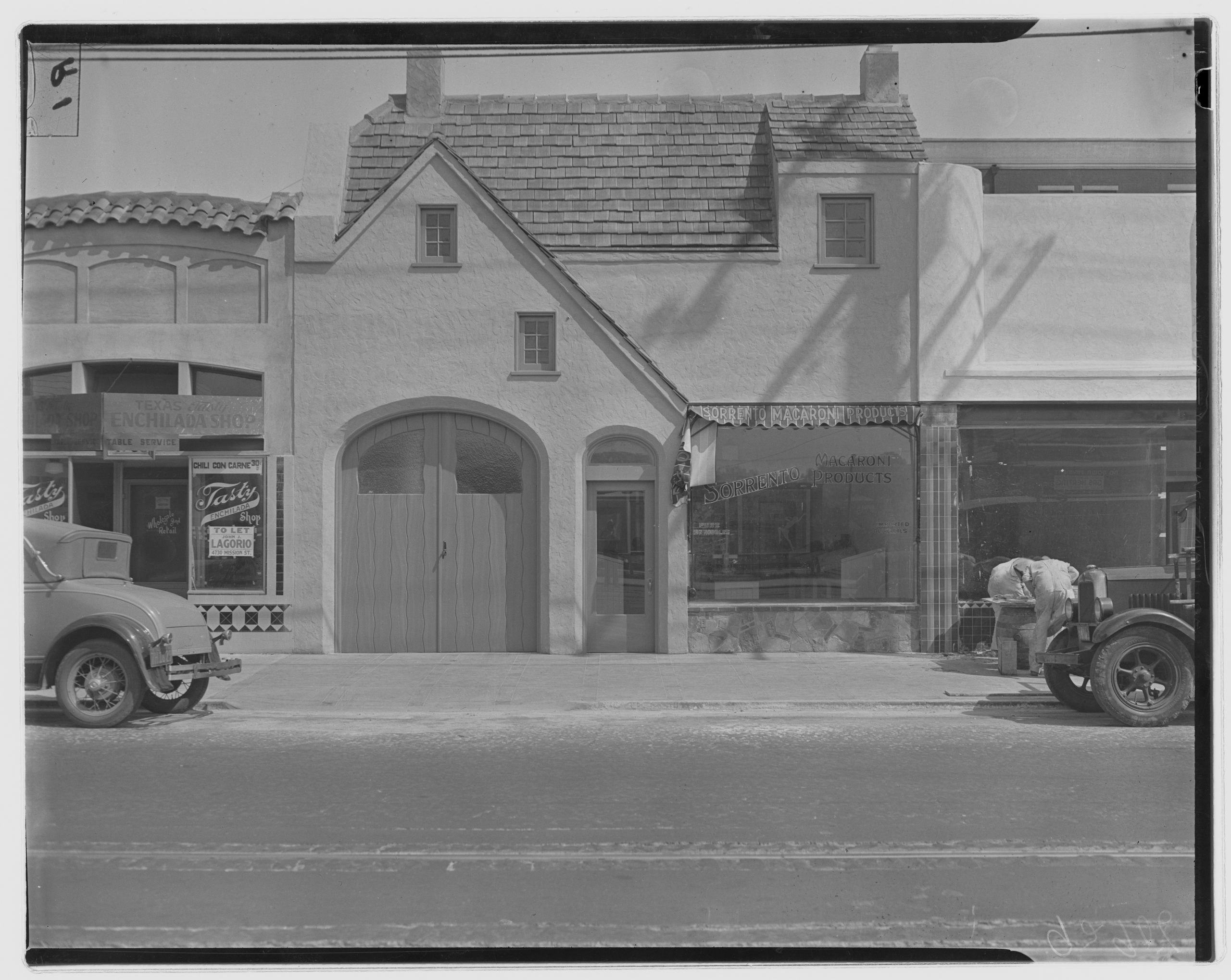 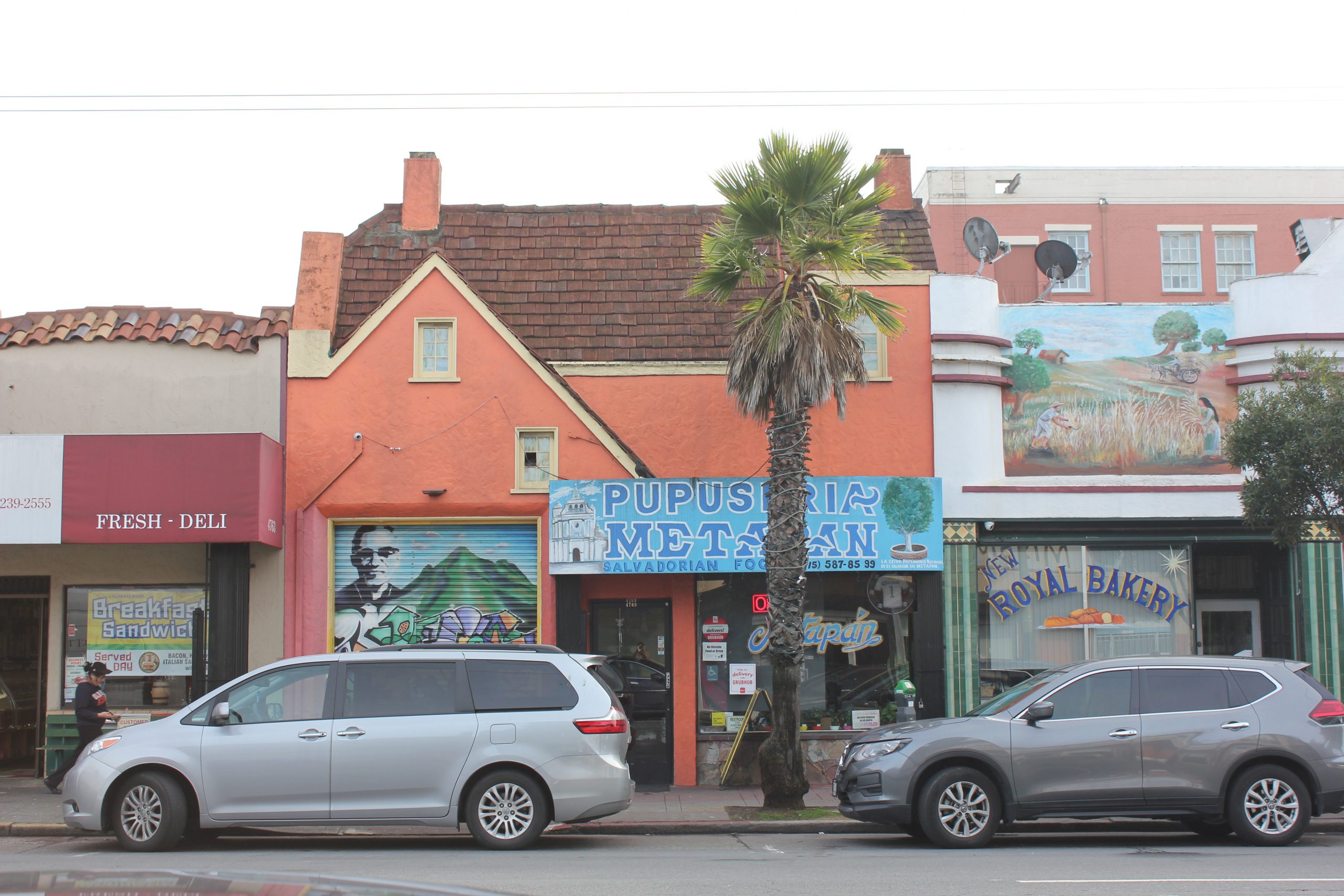 While North Beach is the best-known center of Italian-American life in San Francisco, the Excelsior District in the Outer Mission has a relevant history almost as old. Truck farmers known as giardinieri (gardeners) from Liguria, Tuscany, and other parts of Italy leased land in the area as far back as the 1850s, growing lettuce, cabbage, and artichokes alongside hog farmers and dairy ranchers. The streets and European-capital street names of the Excelsior District were created as part of an 1869 homestead association, but true infrastructure, transportation, and building activity didn’t arrive until decades after the platting of the district map. Into the early twentieth century, a great deal of the Outer Mission and Excelsior remained agricultural fields with a few scattered home sites and Italian families of the thinly populated area had to travel hours to attend mass in North Beach. In 1898, an Italian National Church, Corpus Christi, was founded on the modern-day corner of Alemany Boulevard and Santa Rosa Avenue, and the first branch of the Bank of Italy was established on Mission Street a mile north of the Excelsior District in 1907.

The Excelsior grew in the aftermath of the 1906 Earthquake and Fire, as displaced San Franciscans from the city’s core moved into less-affected outlying areas. Real estate broker Ambrose B. Frank considered himself a pioneer and key figure in the neighborhood’s post-earthquake growth. He opened his real estate office at 4607 Mission Street in 1907, and by the 1930s he was “hailed by his neighbors as the mayor of the district,” according to the San Francisco Examiner. In 1935, Frank had the “new modern type” building at 4769-4773 Mission Street constructed without an identified architect, but with a long list of local contractors and suppliers. Italians and Italian-Americans remained the neighborhood’s dominant ethnic group, with many businesses on Mission Street and Geneva Avenue featuring signs in the window assuring customers they spoke Italian (Si Parla Italiano). When Ambrose Frank’s building was completed, two Italian-affiliated businesses moved in.

In 1935, Gaetano Ferrigno, Vice President, stockholder, and member of the Board of Directors of the Golden Grain Macaroni Company, decided he wanted out of the company.

Legally known as Gragnano Products, Golden Grain made macaroni, vermicelli, egg noodles, and semolina products at 966-970 Bryant Street and was the largest of some dozen macaroni manufacturers in San Francisco, most based near the Italian population of North Beach. Bread and bakery products, including the making of pasta, was the third-ranked industry in San Francisco by annual value in the early 1930s.

In an acrimonious split with his relatives, Ferrigno arranged to be bought out of Gragano Products to launch his own competitive business. He chose A. B. Frank’s new Mission Street building for the Sorrento Macaroni Company, leasing 5,000 square feet. It wouldn’t be the first macaroni factory in the area; the Green Valley Macaroni Factory had operated just across the street at 4736 Mission Street from about 1914 to 1923. (Green Valley was a promoted alternative name for the Excelsior in the 1910s.)

The Storybook-style storefront at 4769 Mission Street served as Sorrento’s sales space while an alleyway behind the rustic garage doors accessed the macaroni factory in the back of the full lot. Sorrento Macaroni, while never reaching the commercial success of the company Ferrigno left, stayed in business into the 1970s. Angelo Ferrigno, Gaetano’s son, later made the 4769 Mission Street storefront into the Sorrento Delicatessen.

After securing the lease for the Sorrento Macaroni Company, Ambrose Frank advertised the remaining 4,500 square feet of the building as “splendid for Super Market, Department Store, Furniture, 5-10 & 15¢ Store, Music and Radio, Auto Sales Room, Cookies, Cracker and Food.” His last three suggestions proved the most accurate when he quickly came to terms with the Royal Baking Company, which leased the ell of the building not occupied by Sorrento Macaroni. Frank filed a permit application to install two large double-brick Dutch ovens in October 1935, and the Royal Baking Company applied for a sign permit the following month.

Royal Baking Company had been in business at 704 Filbert Street in North Beach before joining the Excelsior’s Italian-American community. While the owners, Pellegrino Matteucci, John Mazzini, Jack Cima, Mario Cafferata, and Rudolph Paladini, kept the Filbert Street location for a few years as a branch of their company, four of the five lived within half a mile of the new location and soon the entire business was run on Mission Street. 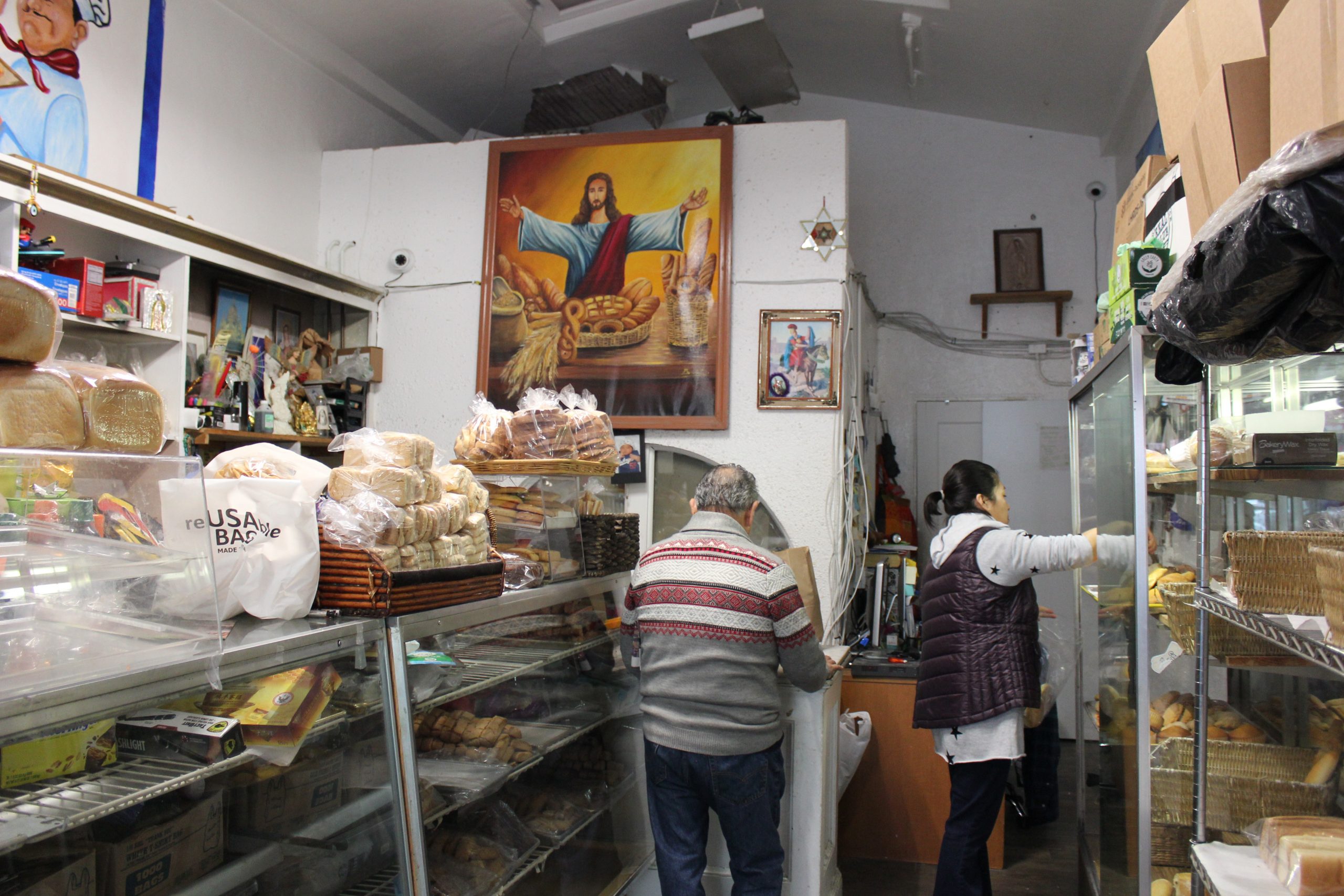 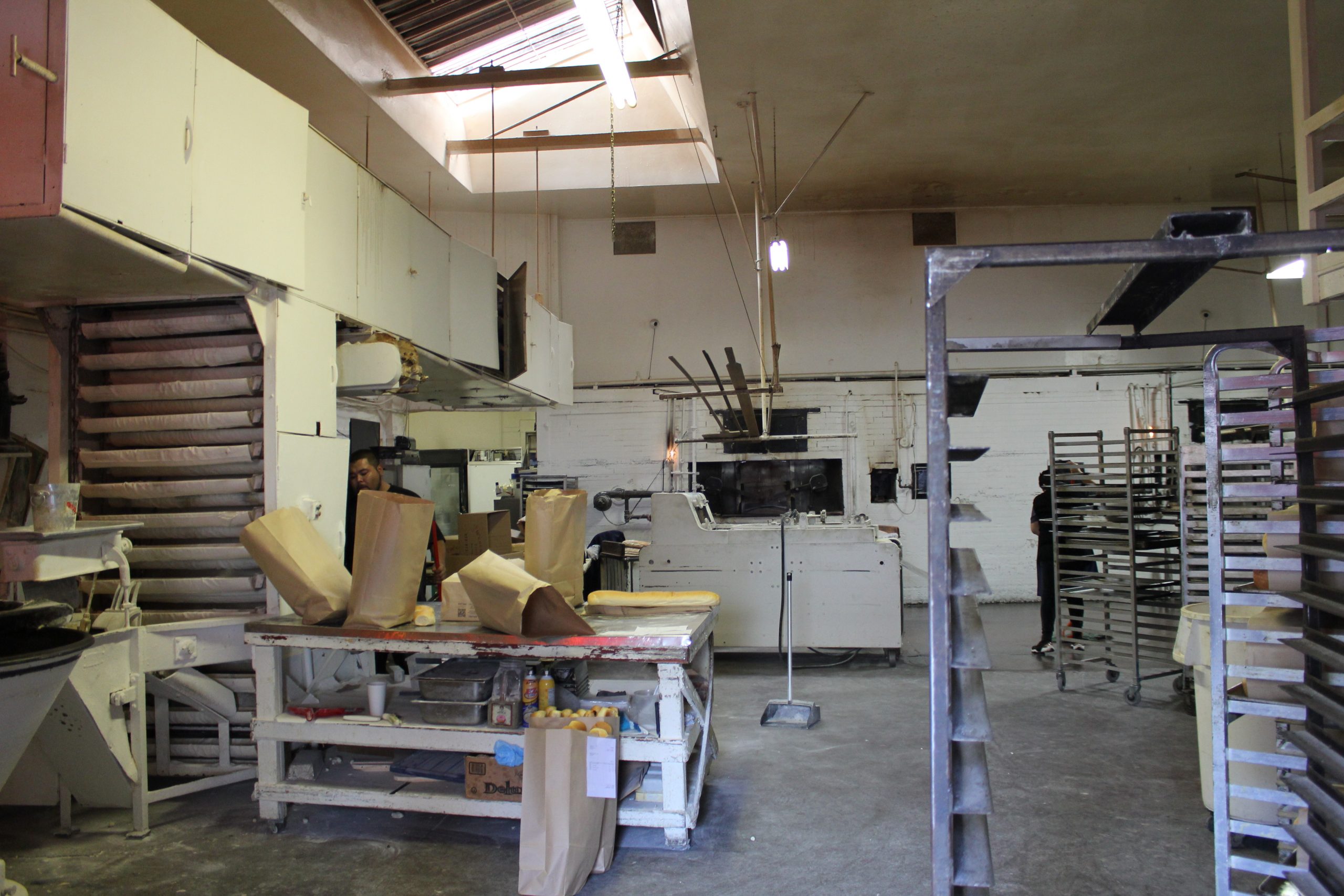 Heritage Photos | (Top) Interior of the New Royal Bakery at 4773 Mission St. during business hours; (bottom) a glimpse into the bakery floor. December, 2019.

Owners and partners over the years have included members of the Italian and Basque communities, with Royal Baking daily supplying bread to restaurants across San Francisco and Daly City and selling to local customers at the Mission Street storefront. In the 1970s, as Latino and Filipino populations overtook the Italian community as dominant ethnic groups of the Excelsior, the Royal Baking Company continued as an island of Italian culture, offering grissini, panettone, buccellato, focaccia, and “special Italian cookies” while being recognized as one of the city’s foremost purveyors of French and Italian breads.

In recent years both Heritage and the San Francisco Planning Department’s preservation staff have made a concerted effort to bring the protections and recognition of City Landmark status to traditionally overlooked neighborhoods, and identify important but under-represented cultural affiliations and building types. Despite these efforts, only seven of the 288 properties designated San Francisco City Landmarks are within a mile and a half of Persia Avenue and Mission Street, the heart of the Excelsior. Four of those seven have received designation just within the last four years. A similar circle around 16th and Mission Streets would capture a dozen landmarks, and in older parts of the city many more.

Balboa High School (#205) and the Alemany Emergency Hospital (#227) are the only two landmarks that could be considered within the broader Excelsior neighborhood, although each technically lies within the boundaries of Geneva Terraces. The Royal Baking Company building has the potential to be the first designated City Landmark of the Excelsior District proper.

Introduction of the nomination is scheduled will go before the Historic Preservation Commission on February 3, 2020, and landmark status could be conferred by the Board of Supervisors as soon as summer 2020. Outside of a few modifications, including the replacement of the alley doors, the integrity of 4769-4773 Mission Street façade is high.

With its distinctive architectural design, its connection with San Francisco’s baking and macaroni industries, and its significant association to the city’s Italian-American community, the Royal Baking Company building is a deserving addition to the city’s registry of significant historic resources.