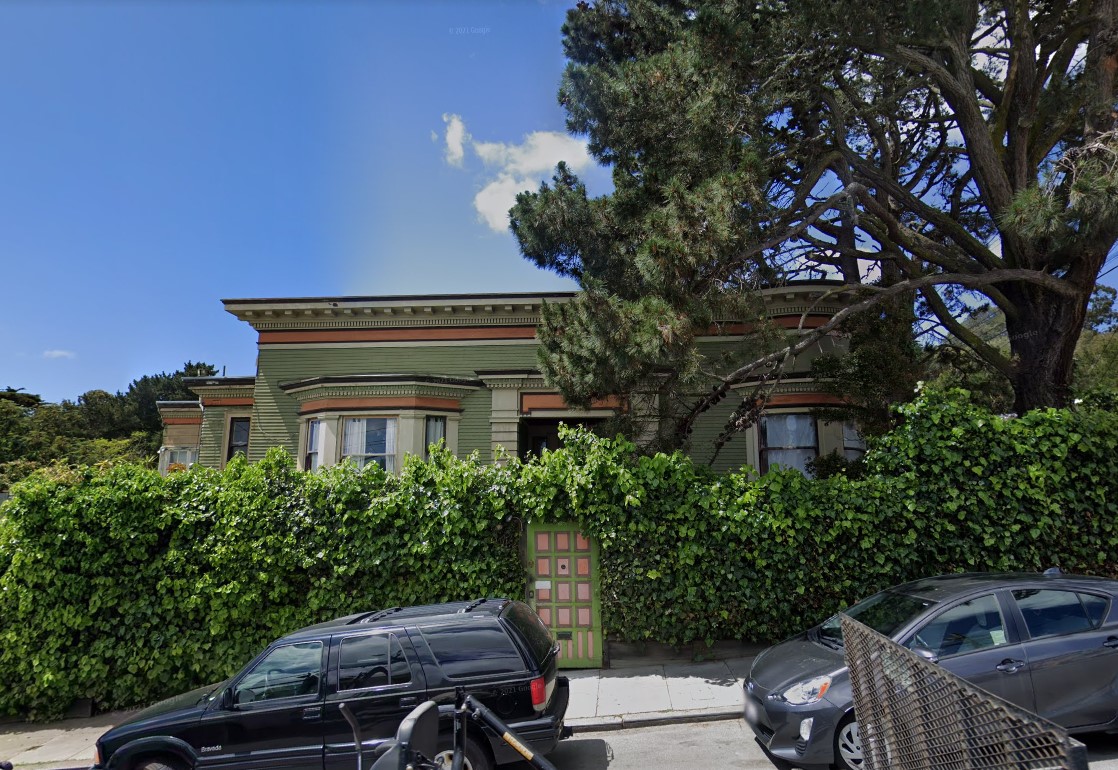 The exterior of 2 Hahn Street in Visitacion Valley.

For this Fun Friday, we are taking a look at some of Visitacion Valley’s unsolved mysteries. Over more than a decade practicing local history together, the Visitacion Valley History Project have uncovered a few neighborhood history mysteries that they have yet to fully solve. We need the help of local amateur sleuths! Can you provide more information that might help shed light on the following mysteries?

2 Hahn Street – The Case of the Cut-Up House

Our first mystery concerns a home on the edge of Visitacion Valley near McLaren Park. Located at 2 Hahn Street at the corner of Hahn and Leland Avenue, this Edwardian residence is an anomaly in an area filled with midcentury homes. Property records indicate that it was built in 1900, and stands on a 2,783 square foot parcel.

According to local legend, 2 Hahn Street may actually be one piece of a larger home, which was amicably divided into two or three parts among three sisters who equally loved their family home. To this day, no one has been able to identify the additional pieces of the home: are they still in San Francisco, or did they make it outside city boundaries? 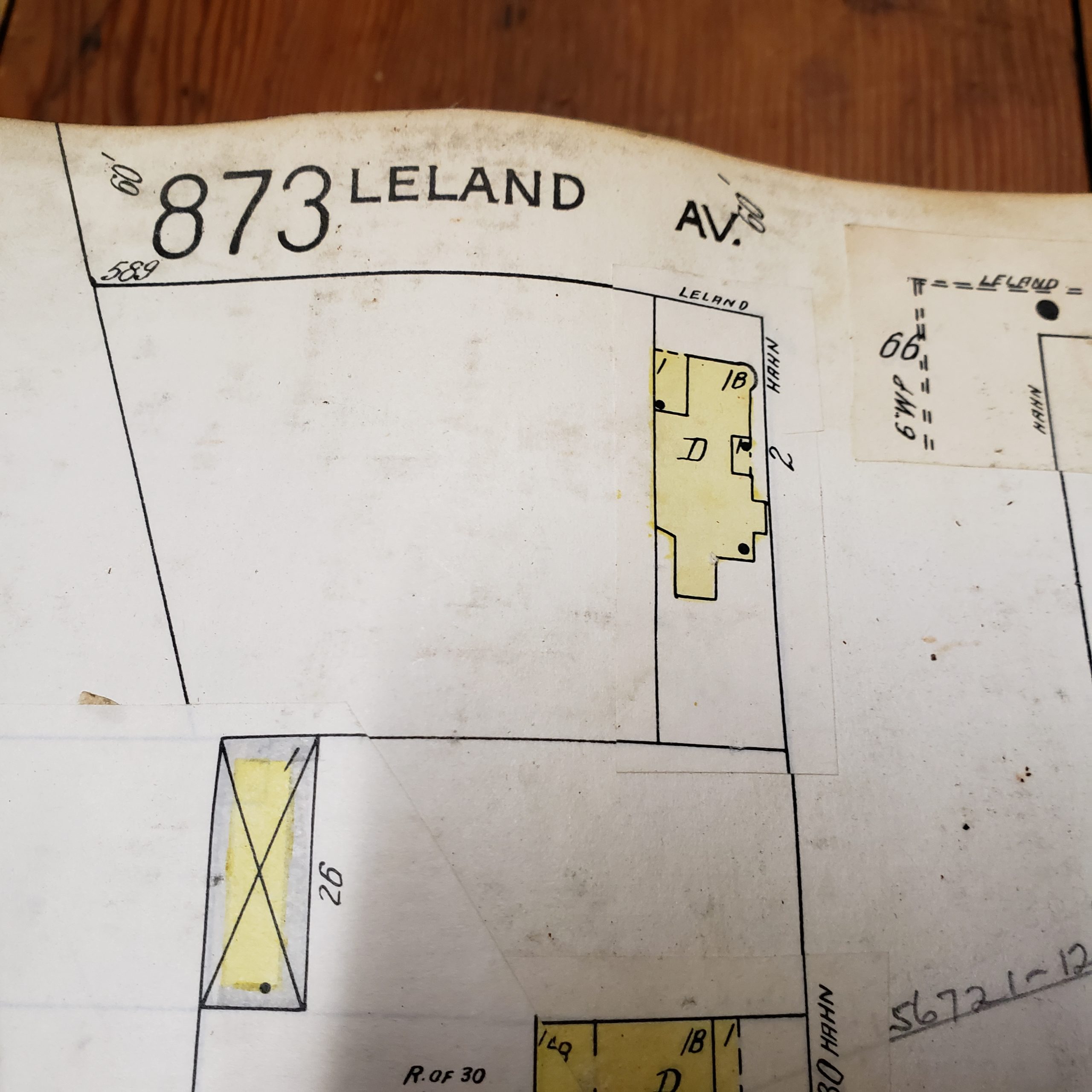 2 Hahn as seen on the 1949 Sanborn Fire Insurance Map, a year after the house was moved to this lot.

Thanks to excellent detective work from the Visitacion Valley History Project (VVHP), we know that 2 Hahn was actually moved to its current location in late 1947, possibly from the Marina or Mission Districts. A water hookup occurred on October 8, 1947, and the Application for Service Installation was placed a few days prior on September 17, 1947. The lot where the house now stands was empty prior to that.

The long-time owner of the lot (6260-001) prior to the house appearing there was Edward J. Gallagher. He was listed in city directories as street contractor and municipal construction, and lived at 1160 Fulton Street. One theory from Heritage Research Assistant William Beutner is that the building was displaced as part of road construction and Gallagher moved it to that lot.

However, the key to this mystery may be the Harper family, who according to the VVHP were the ones to move the house to the lot in 1947. An Edwin B. Harper and his mother Rahama are listed interchangeably as owners of 2 Hahn over the course of that year. VVHP’s research indicates that the Harpers did not in fact live in the house in 1947, but instead moved to a house nearby at 160 Teddy Avenue. By February 5, 1948, Teofilo J. & Margaret Rozario are listed as owners. 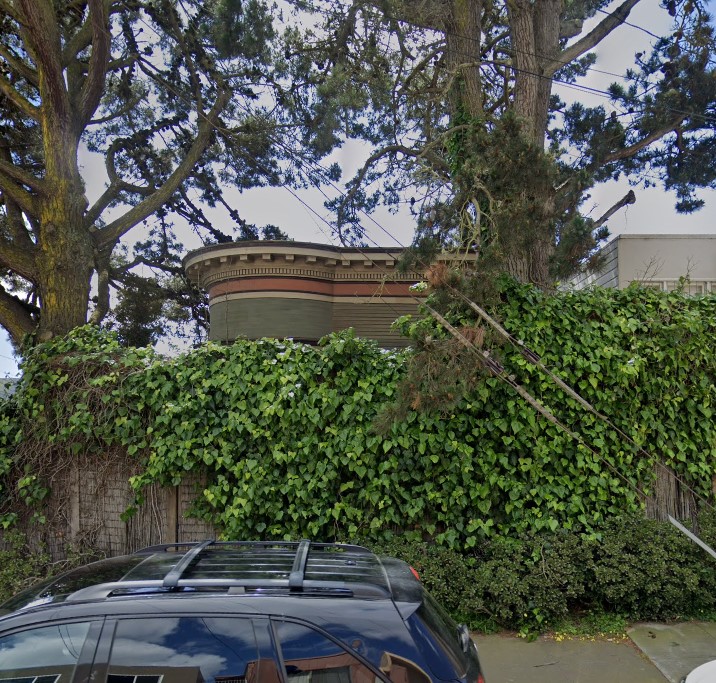 View of the north side of the house. Google Maps.

More facts came to light during the VVHP’s interview with the home’s current owner, sculptor Mikal Cartor, back in 2011. According to Mikal, Tamar Rey Potter, an artist from North Beach, bought 2 Hahn in 1952 or 1953. Mikal had spoken to Tamar, who told him that she had purchased the home from one of the three sisters. She also added that the home was moved from either the Marina or the Mission Districts, and a note about a shipbuilder that the VVHP did not fully recall. However, the Rozario family had owned 2 Hahn prior to Potter, so it is unclear how she could have purchased the home from one of the three sisters…

On May 17, 2005, VVHP’s Edie Epps had a phone conversation with Joana Louise (Rozario) Miranda. Below are her notes, edited for clarity:

“She was 13 years old and they moved [to 2 Hahn] from North Beach. They were the first family to occupy the home in approximately 1947.  She remembers stain glass windows and leaded glass interior doors, as well as a very heavy single door and a double door. There was a light well…a living room that they used as a bedroom; a dining room with beveled glass; a small kitchen, pantry and a small ½ bathroom in the back…she thought this might be servant quarters.  She recalled stairs to nowhere and finished hardwood floor in attic…right under the roof.  The basement is where she played and watched movie pictures.  The garage was on the side…thought to be a carriage house. She thought the house was set on lot “oddly,” since it took up most of the block on Hahn.  She also recalled going with her father (hand in hand) to pay Mr. Harper the mortgage payments…he was the person that moved the house…but she doesn’t know from where. He lived on Teddy Street near the crest….a lot of stairs to climb she recalls. She had never heard or recalled the story of the three sisters but remembers a dress shop on lower Leland Avenue by the name Three Sisters.”

The mystery remains: What is the real story of the three sisters, and what is the original location of the house?  Based our research, we are at least certain that the house was moved to its present location from elsewhere. The VVHP are also fairly certain that based on their research the house at 2 Hahn is not fully intact, which supports the belief that it is only one piece of a whole.

Edit 10/10/21: After seeing this post, David Gallagher has helped solve a big part of the mystery, discovering 2 Hahn’s original location before it was moved:

Too many coincidences to let this one slide. I think there’s a chance that 2 Hahn may have been moved from 24th & Vermont (for US101 construction) & had a story removed. I also think this @OpenSFHistory mystery photo might be it, based also on this @SFMTAPhoto of 24th St. pic.twitter.com/mgqJ0kZANB

150 Delta Street – The Case of the Hidden Room 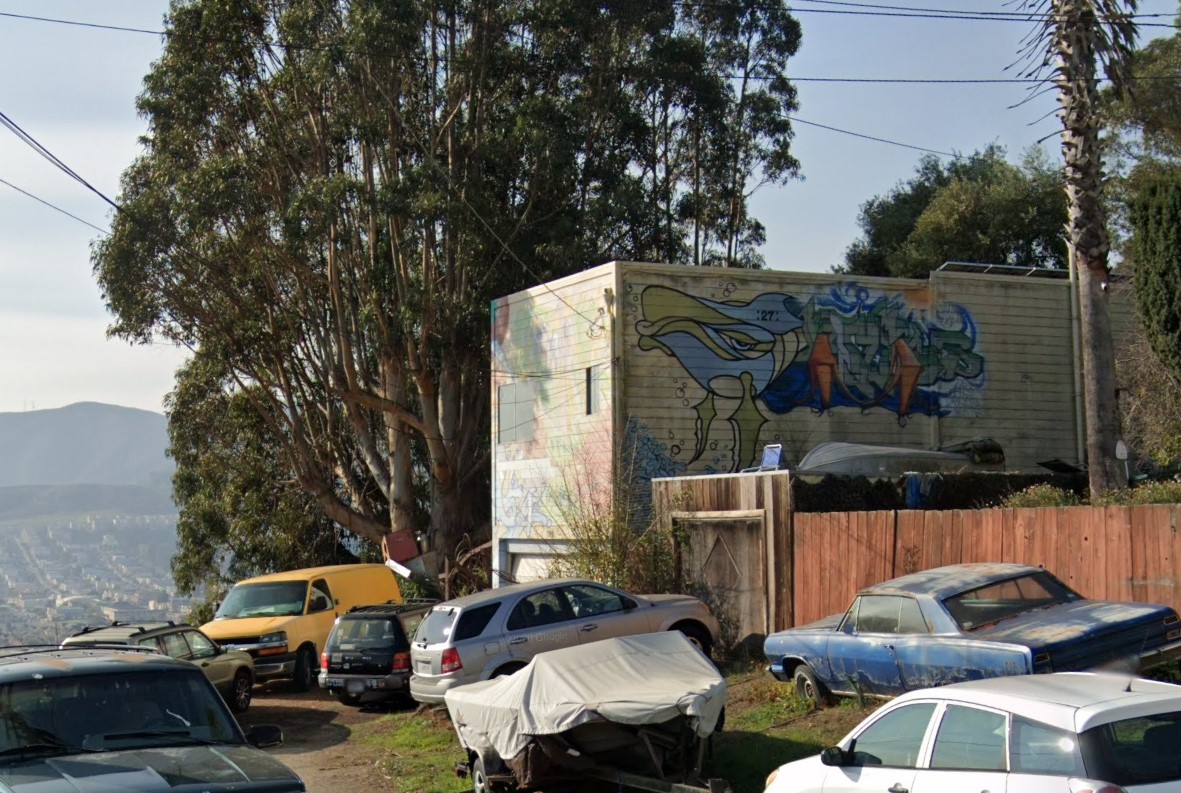 Exterior of 150 Delta Street in 2017. The mural of Geistal (the Whale) is partially covered with graffiti. Google Maps image.

Our next mystery concerns the home of Visitacion Valley resident Opal Essence, an artist who moved to 150 Delta Street in 1979. The home, perched on the hillside that overlooks the Valley, has a long and interesting history, but the discovery of a mysterious room in the house is of special interest. 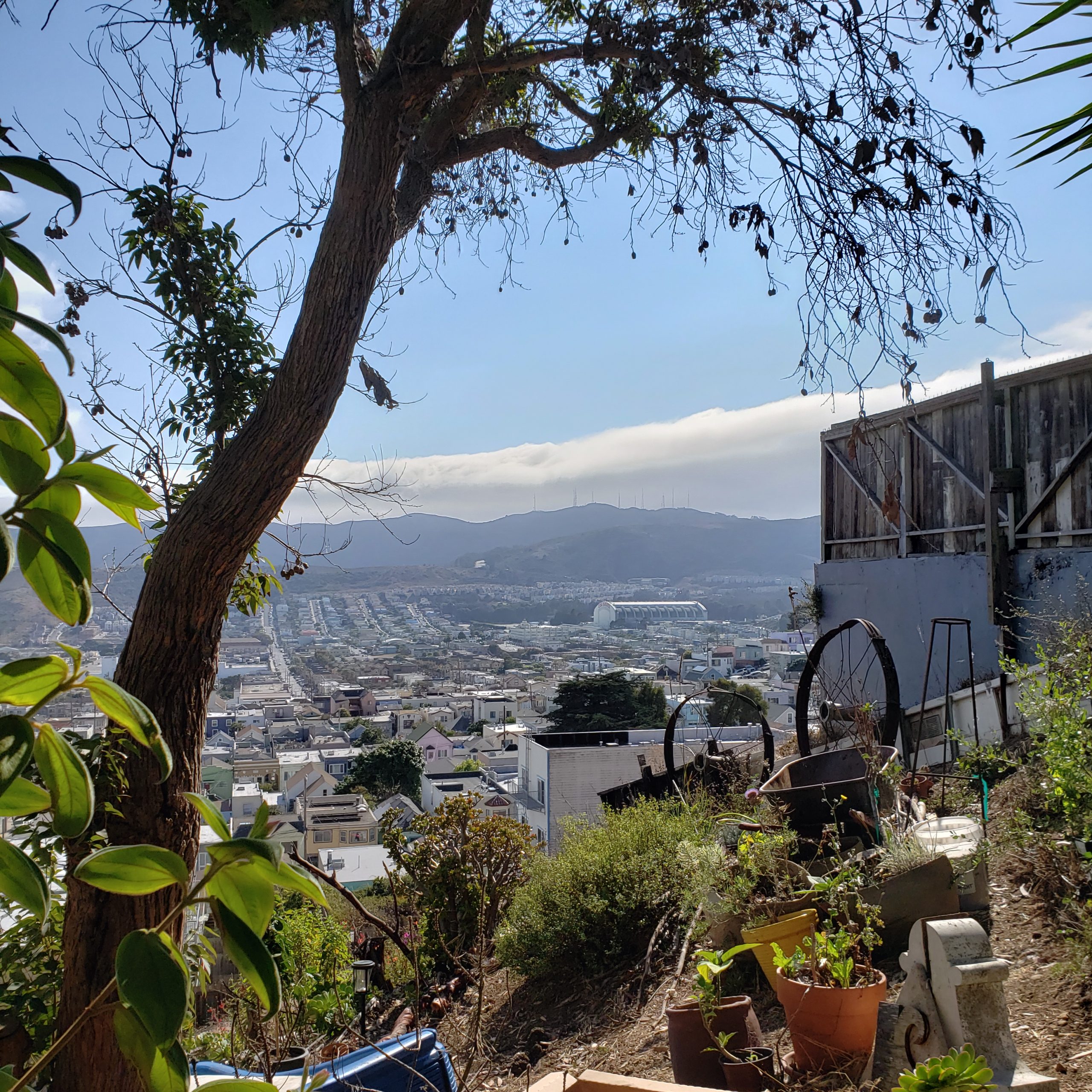 The stunning view of Visitacion Valley from the garden at 150 Delta Street. The Cow Palace is visible in the distance. 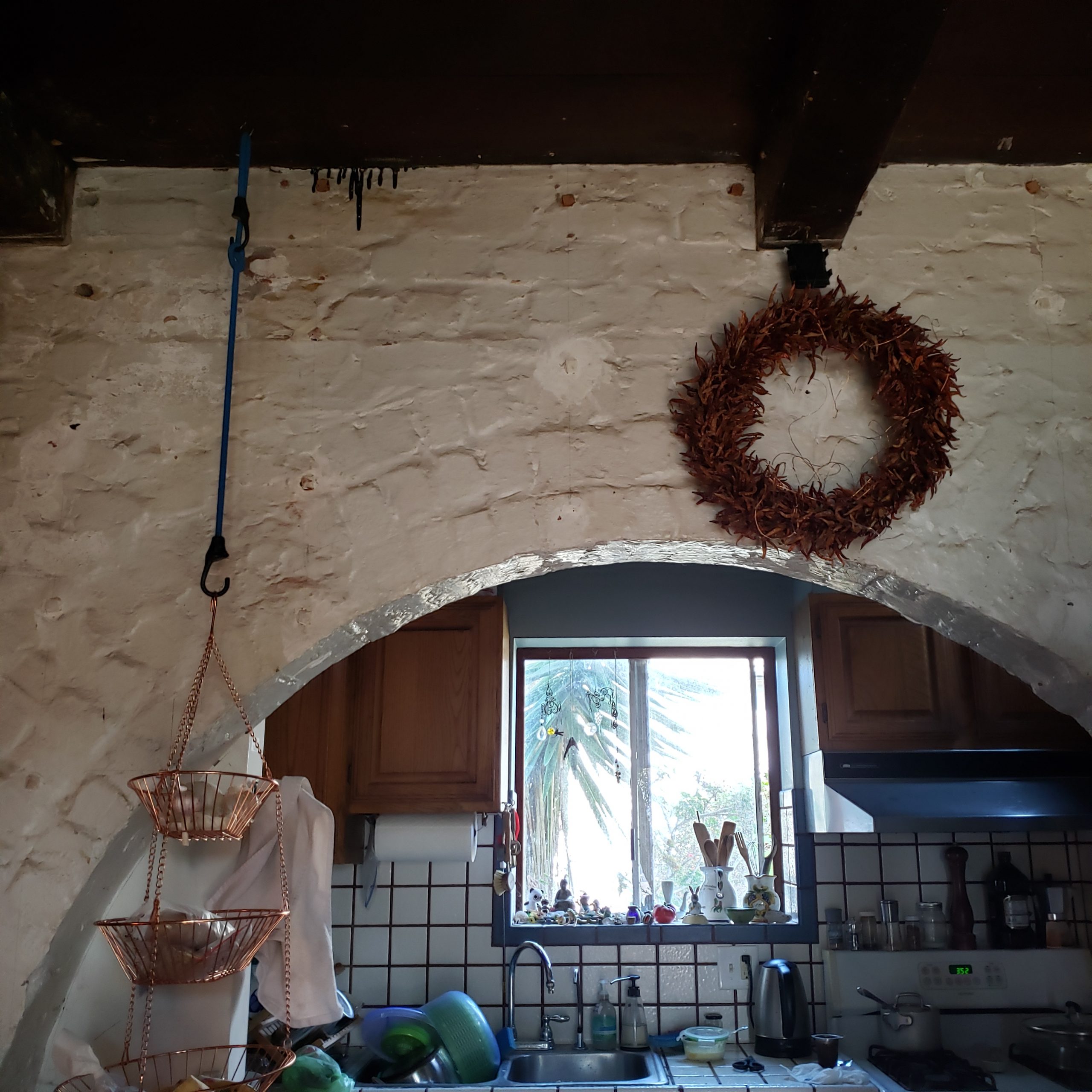 When Opal started a project to remove the sheetrock on her walls over a decade ago, she discovered that there was an entire brick structure hidden within them — archway and fireplace included. She also discovered massive wooden beams running across the ceiling, which over the years she had been led to believe were from Gold Rush-era ships. 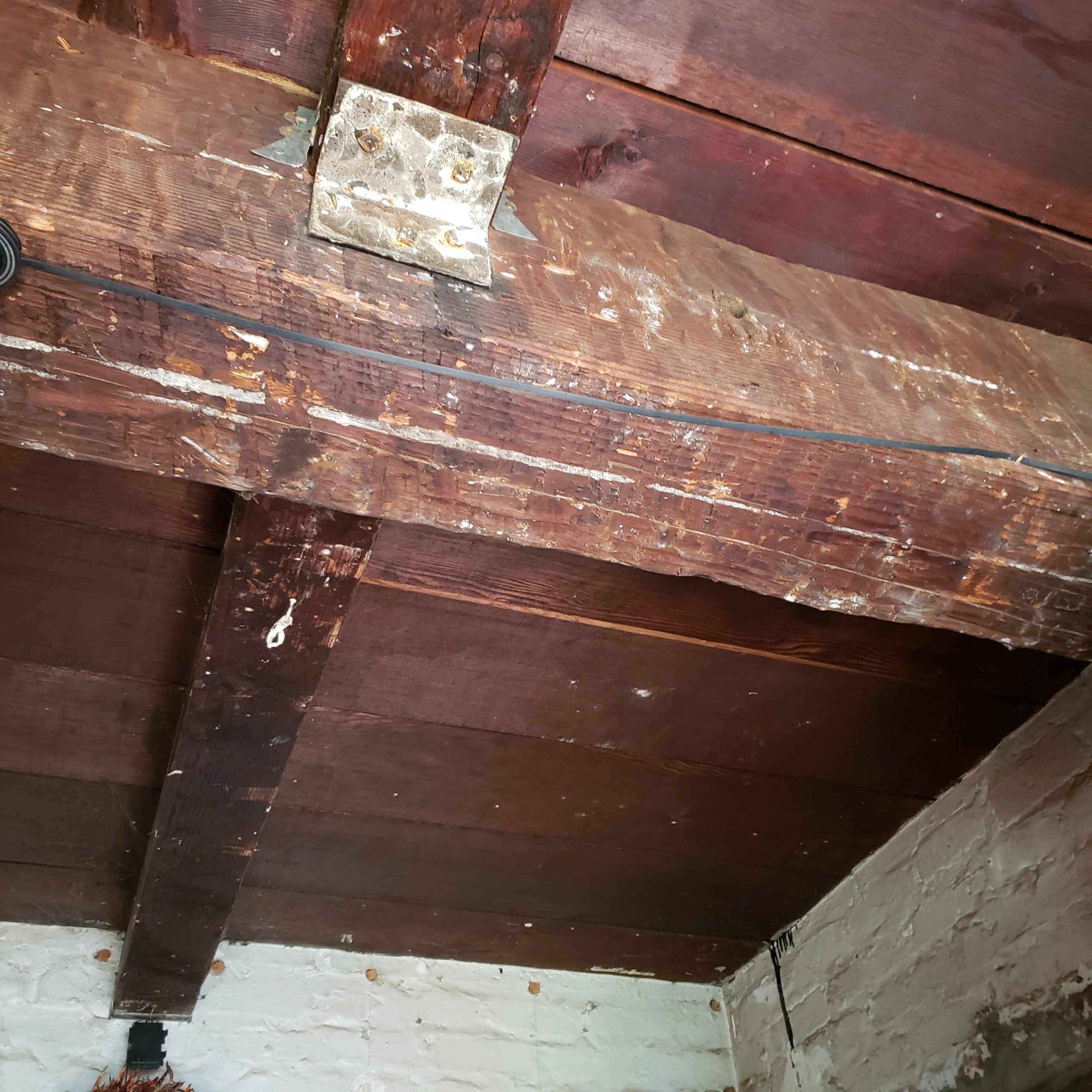 Old wooden beams that Opal discovered under sheetrock — likely not transported here from the carcass of Gold Rush era ships, but installed post 1934.

According to property records, 150 Delta Street was constructed in 1934; however, Opal’s discovery of an older room behind the sheetrock had originally suggested that the home was perhaps built around the older structure, which Opal believed was constructed before 1895. She had also thought that prior to 1934, the structure may have served as someone’s home or as a lookout, due to its prime views of the bay and surrounding area. 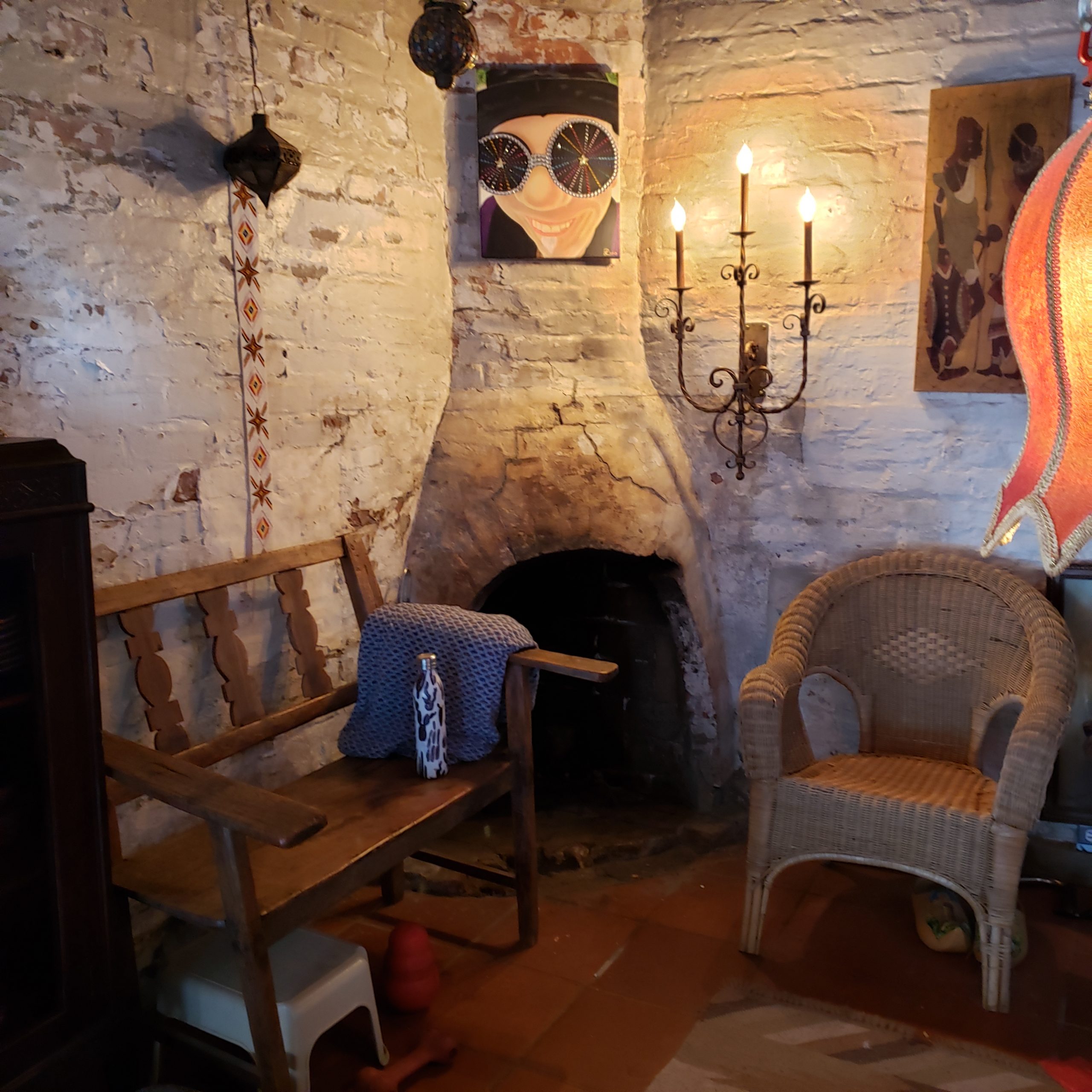 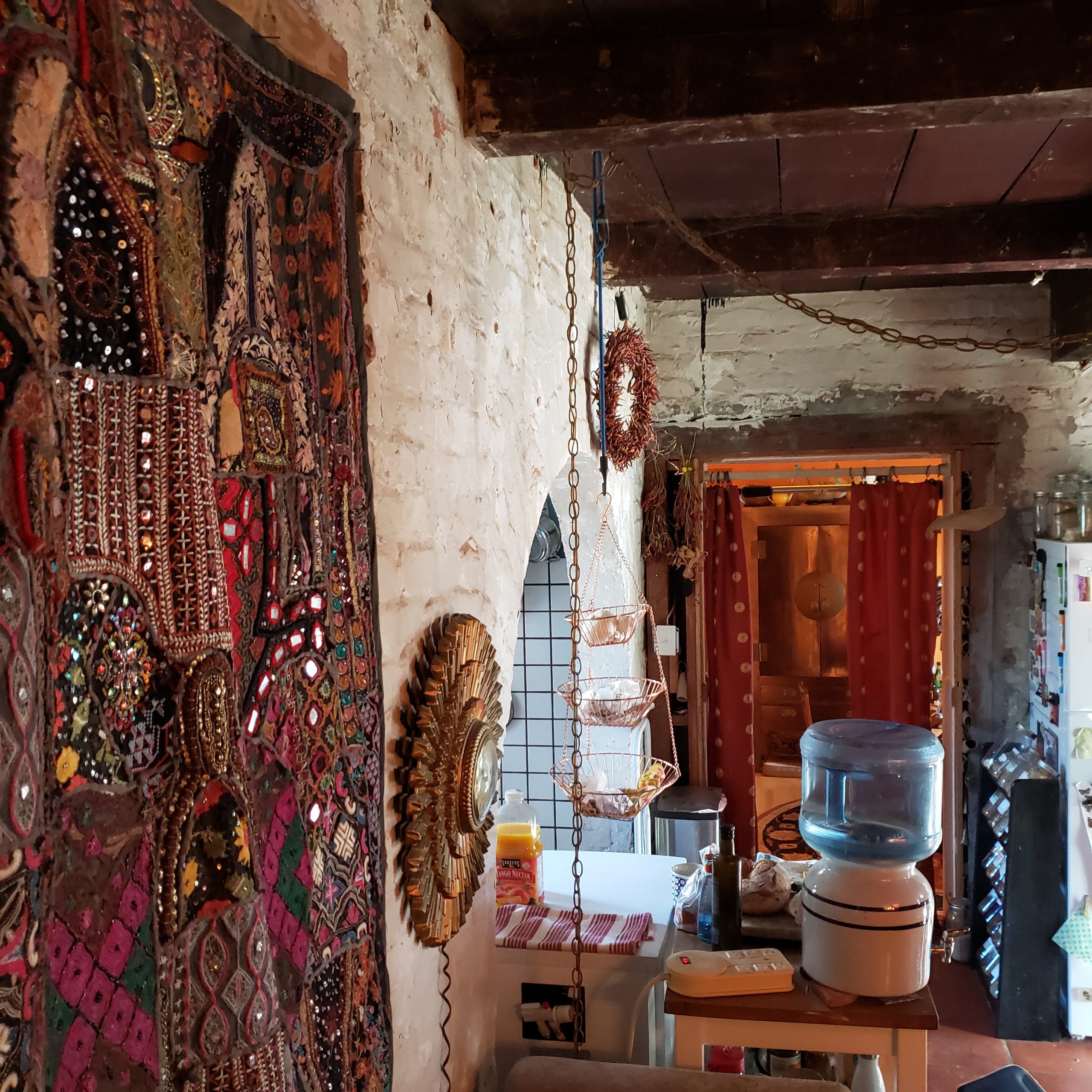 Another view of the room, looking towards the brick archway. 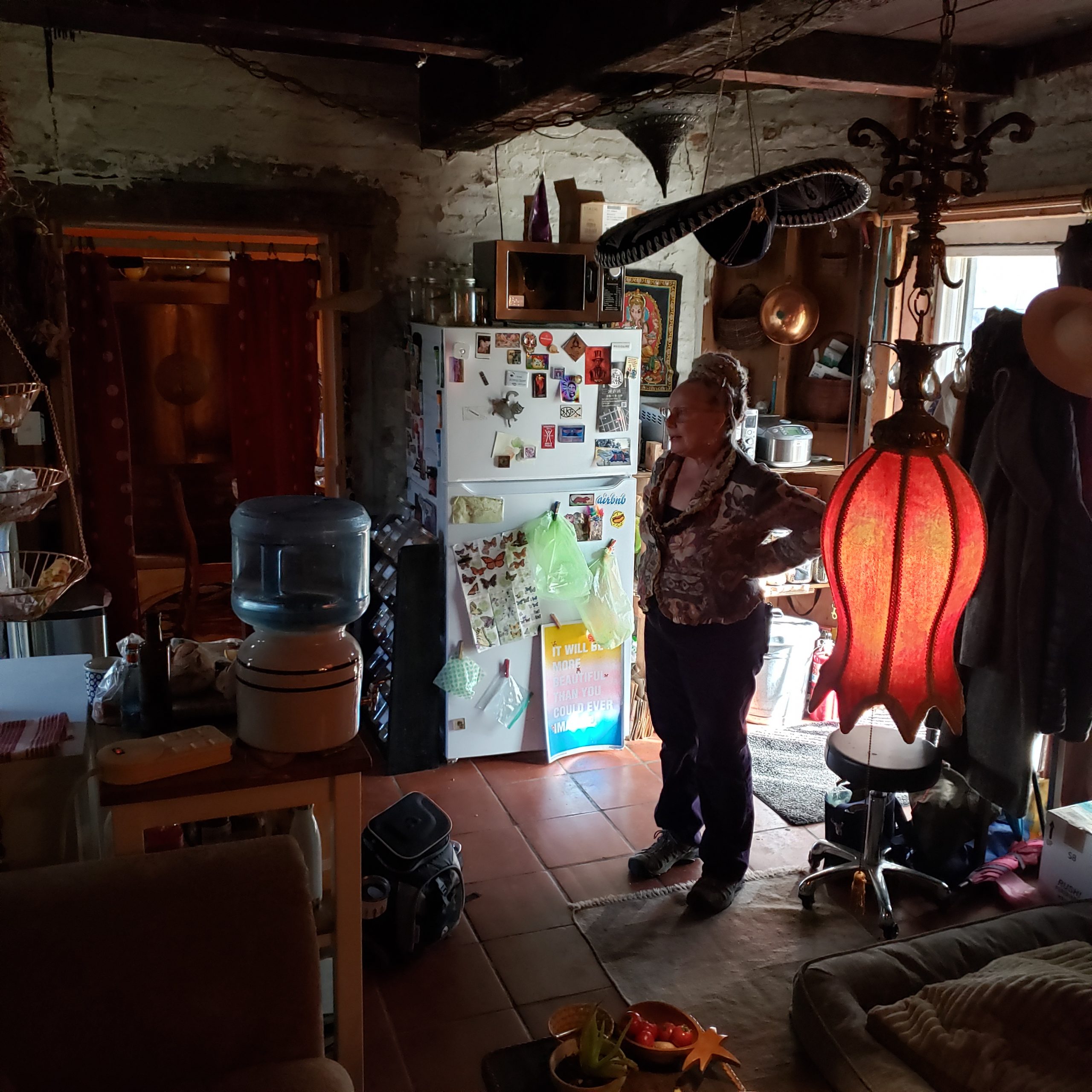 Opal Essence explaining her theories as to the room’s origins. When Opal first moved to San Francisco in the 1970s, she worked at the Shirley Hotel on Polk Street before buying 150 Delta Street in 1979. Heritage photo.

However, research by Heritage’s William Beutner indicates that in fact no house stood at 150 Delta prior to 1914, so the brick structure could not date back into the 19th century as Opal had originally believed. However, William did find that 150 Delta was an anomaly in terms of its constructed materials; a 1949 Sanborn Fire Insurance Map indicates that the house was the only of its kind for blocks that incorporated brick (all other houses were made solely of wood). But why was this the case, and what was the brick addition originally used for? 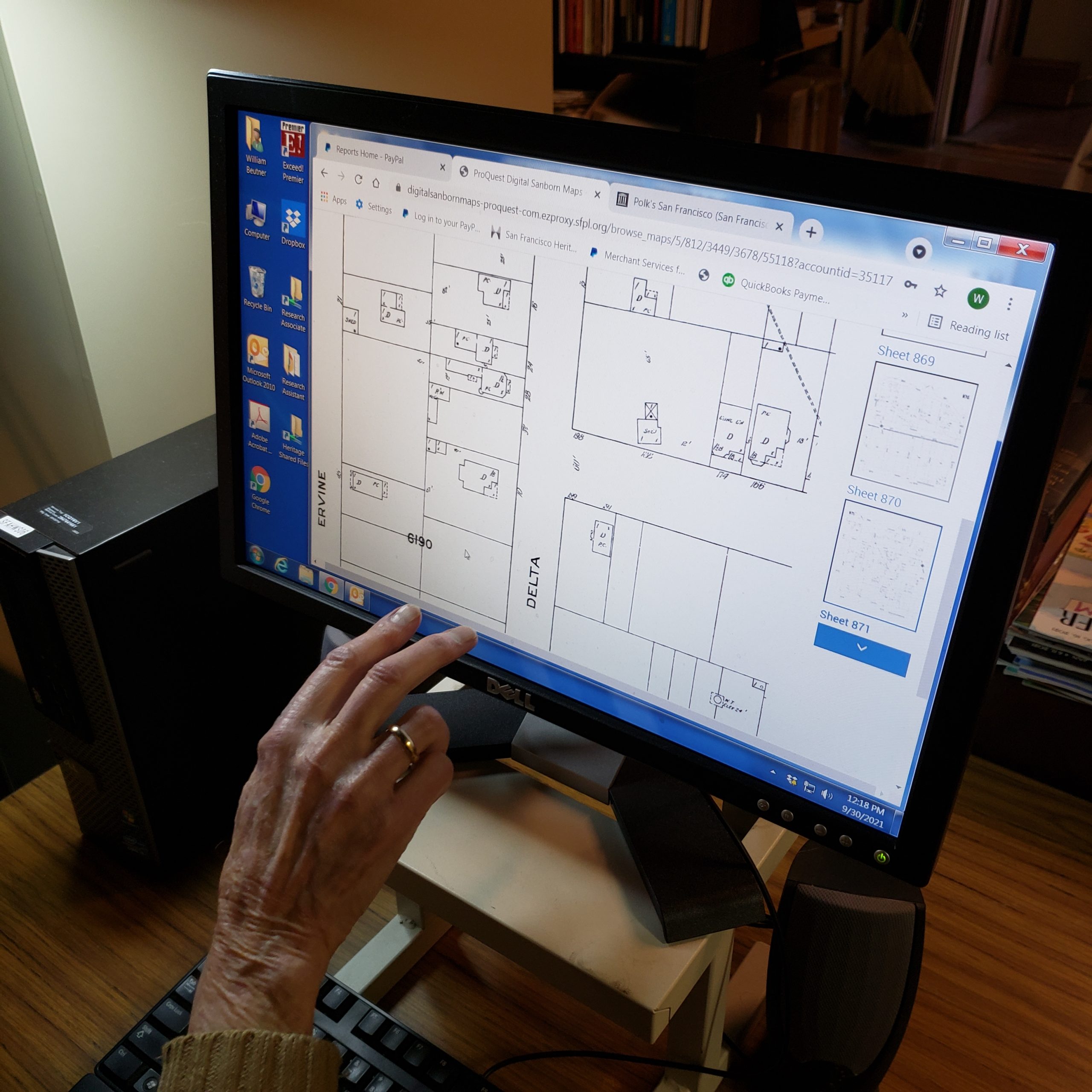 Heritage Research Assistant William Beutner points his cursor to the empty lot where Opal’s house now stands on a 1914 Sanborn Fire Insurance Map, indicating that no house stood there at least before 1914. 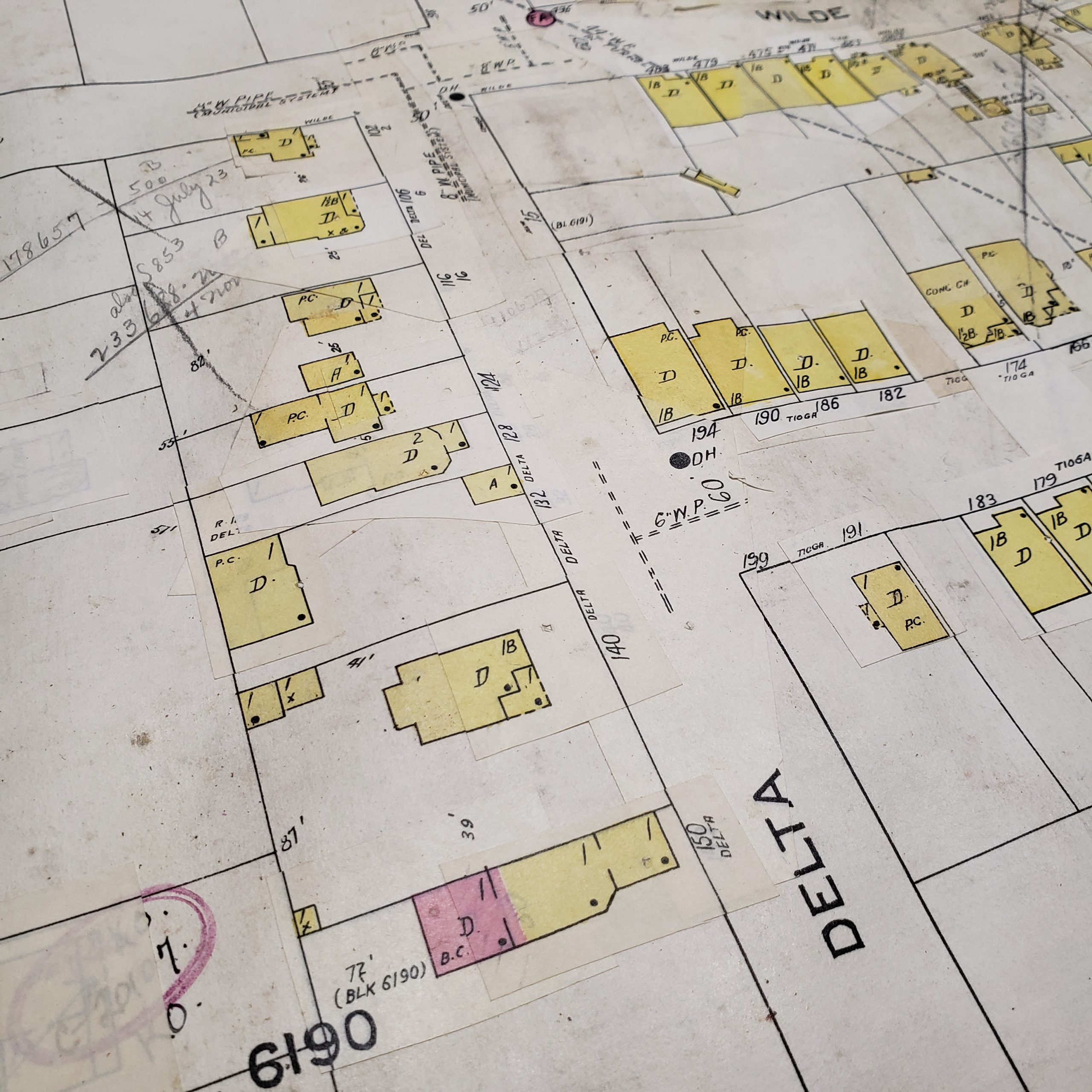 150 Delta is seen in the foreground of this 1949 Sanborn Fire Insurance Map. Yellow indicates wood frame buildings and pink indicates brick; but why is 150 Delta the only house in the vicinity with brick?

Instead of covering up what she had discovered, Opal left the room as she found it. As a result, this particular room of the house today possesses an otherworldly feel, aided by Opal’s additions of a Spanish-style electric sconce and an eclectic selection of hanging wall art. 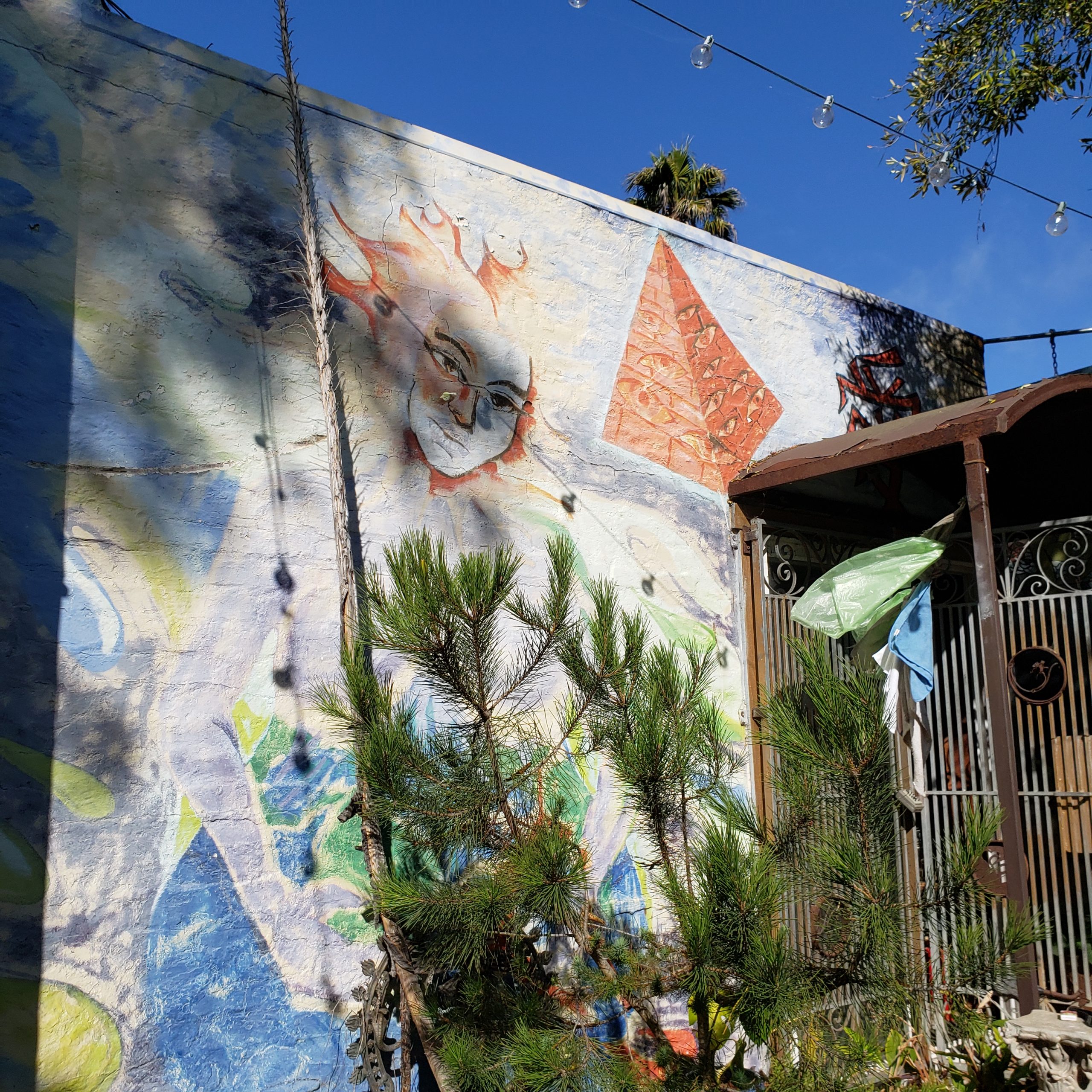 The brick structure from the exterior. Like the front of Opal’s home, it was painted by a series of artists twenty years ago to commemorate the home’s notable former resident, Dr. Blanche M. Baker. Heritage photo.

The exterior of Opal’s home, including the brick structure she discovered, is now painted with numerous colorful murals in honor of one of 150 Delta’s prolific former residents. When researching the history of her home, Opal had also discovered that one of the home’s previous residents was Dr. Blanche M. Baker, a pioneer in LGBTQ rights who lived in the house starting in 1953 (according to city directories). A psychiatrist by profession, she notably put her career on the line by publicly challenging the then-widespread belief that homosexuality was a mental illness that could be cured or managed by psychotherapy treatments.

In 1955, Dr. Baker gave an address titled “A Psychiatric Evaluation of Homosexuality; Causative Factors and Therapeutic Suggestions,” at homophile organization ONE Inc.’s first Midwinter Institute in Los Angeles. This gathering was reportedly the first forum in North America that was organized by homosexuals, for homosexuals, and focused on the scientific, philosophical, legal, and social questions pertaining to their lives. In 1957, Dr. Baker defended the homosexual male lifestyle in the introduction to Helen P. Branson’s book Gay Bar, published by the homophile Pan-Graphic Press in San Francisco:

“Homosexuals are human beings, too. They are interesting, real, unusual, creative, beauty loving people, if one can get behind the mask of camping pretense and sham so many of them feel compelled to wear to protect their sensitive souls from the condemnation and hate leveled at them by a hostile, prejudiced and uncomprehending society.”

Beginning in January 1959, Dr. Baker began writing a regular advice column, “Toward Understanding,” in the Los Angeles-based homophile monthly ONE Magazine; the column was cut short by her death the following year. In 1965, the ONE Library in Los Angeles was named for her.  Twenty years ago, inspired by Dr. Baker’s pioneering work, Opal commissioned several murals in her honor from prominent local artists, including the Gestalt 6 and Estria. 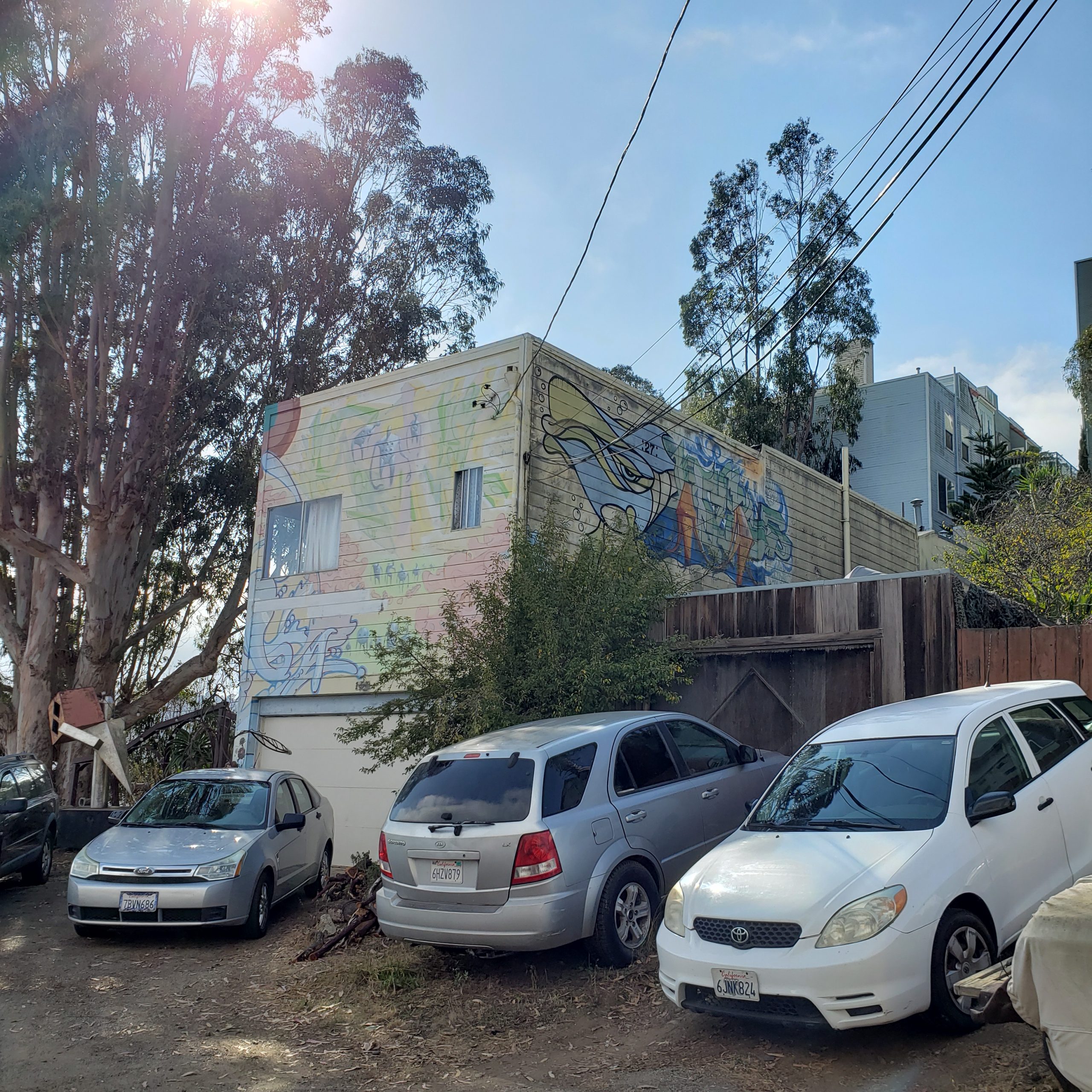 In 1991, under the guidance of Opal, several different artists contributed to painting Geistal (the whale) on the front of the home. Artist collective the Gestalt 6 also painted several pieces on the exterior of the house.

It is unclear if this pioneering former resident of 150 Delta knew about the brick addition of the house. The only previous owner we were able to turn up before Dr. Baker was William Ryder, who owned the house in 1947. The mystery remains: who originally owned the home between 1934 and 1947, and why did that owner incorporate a brick structure into the wooden building frame?

Sources on Blanche M. Baker from the Citywide Context Statement for LGBTQ History in San Francisco, by Shayne Watson and Donna Graves.