On Monday, March 14, the Board of Supervisors’ Land Use and Transportation Committee unanimously recommended designation of the Trocadero Clubhouse as a city landmark. This ordinance is a follow-up to the resolution adopted by the Board in March 2021 that initiated the landmarking process for the Trocadero. Over the past year, the San Francisco Planning Department and Historic Preservation Commission have conducted their analysis and have recommended landmarking of the Trocadero.

The Trocadero is architecturally significant as the last, best example of nineteenth-century roadhouses-stops of hospitality and socializing that once dotted the city and peninsula. It has hosted early Parkside womens’ groups, scout troops, innumerable weddings, birthday parties, and other celebrations. It is likely the most historically significant building in the southwestern San Francisco.

The campaign to designate the Trocadero as a city landmark, which will become the first in the Parkside District and one of the few on the west side of San Francisco, is the first project of Parkside Heritage, a preservation group that was formed out of SF Heritage’s Heritage in the Neighborhoods program in July 2020. We are proud members of this group, which is continuing to work on preserving the Parkside’s rich cultural heritage. In addition to San Francisco Heritage and Parkside residents, Parkside Heritage has representatives from SPEAK (Sunset Parkside Education Action Committee), Western Neighborhoods Project, the Pine Lake Park Neighborhood Association, and the historical group E Clampus Vitus, which is excited and willing to donate a commemorative plaque to offer more information to visitors on the building’s history. Organizations such as San Francisco City Guides, San Francisco History Association, San Francisco Historical Society, Maybeck Foundation, and the Victorian Alliance of San Francisco have also supported landmarking from the very beginning.

SF Heritage would like to thank Supervisor Mar and his former aide Daisy Quan for supporting and assisting with this effort, Pilar LaValley and the Planning Department for excellent work documenting the Trocadero, and staff at the San Francisco Recreation and Parks department for their recognition of the building’s significance and assistance.

The designation is expected to go before the full Board of Supervisors for approval on March 22, 2022. 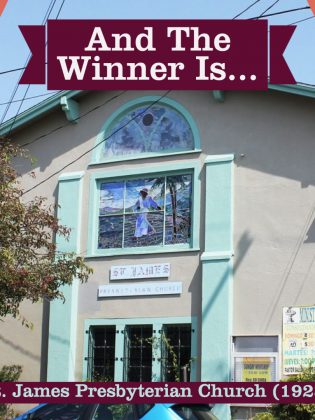 The results are in, and the winner of our Visitacion Valley public voting…