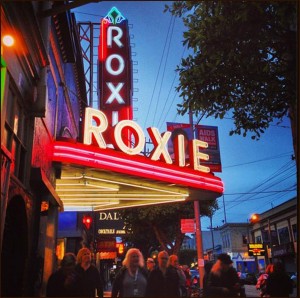 Like many historic theaters, the Roxie faces perennial fundraising challenges that imperil its continued operation. Photo courtesy of the Roxie Theater

Supervisor David Campos worked with San Francisco Heritage, the small business and nonprofit communities, neighborhood groups, and small property owners to spearhead the effort to save the city’s iconic and longstanding Legacy Businesses. Campos’ plan to preserve the City’s Legacy Businesses has been introduced in two phases.

Phase one, which unanimously passed the Board of Supervisors in March 2015, created the San Francisco Legacy Business Registry. The registry is open to businesses and nonprofits that are 30 years or older, have been nominated by a member of the Board of Supervisors or Mayor, and in a hearing before the Small Business Commission, prove that they have made a significant impact on the history or culture of their neighborhood. Only 300 business can be nominated annually and all applicants must agree to maintain the historic name and craft of their businesses. The legislation is directly inspired by, and builds upon, Heritage’s Legacy Bars & Restaurants initiative launched in 2013. 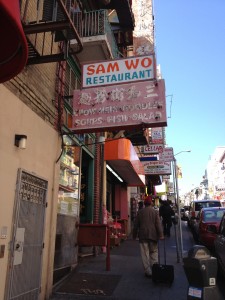 After 100 years, Chinatown’s Sam Wo Restaurant closed its doors on April 20, 2012 due to prohibitive costs of correcting numerous health and building code violations.

On Tuesday, June 10, 2015, Supervisor David Campos announced that his office will place first-of-its-kind legislation on the November ballot that will protect San Francisco’s famous historic small business and nonprofits. Proposition J would establish the Legacy Business Historic Preservation Fund, and is cosponsored by Supervisors Avalos, Kim and Mar. If passed, it will be the first legislation in the nation to recognize notable small businesses as historic assets and incentivize their preservation.

A 2014 report by the City’s Budget and Legislative Analyst’s Office showed the closure of small businesses in San Francisco has reached record numbers with almost 4,000 small businesses closing in 2014 alone. In contrast, only 693 small businesses closed in 1994, the first year of the study. The report draws connections to San Francisco’s skyrocketing rents and the high level of commercial evictions. State law disallows controls on commercial leases, and commercial rents in most neighborhoods have risen significantly with some areas increasing more than 256%.

“It’s been heartbreaking to see these world famous business that for decades have been anchors for their neighborhoods shuttered due to doubling and tripling rents,” Campos said. “These otherwise profitable small businesses are at the mercy of a speculation-fueled real estate market with zero protections for commercial renters. This initiative incentivizes the preservation of our Legacy Businesses and gives them a fighting chance to make it through the affordability crisis.”

Inspired by similar programs in global cities such as Buenos Aires, Barcelona, and London, San Francisco’s Legacy Business program recognizes that our city’s unique character is equally defined by its historic neighborhoods and the people, businesses, and uses that enliven them. For more information about these model programs from around the world, see Heritage’s 2014 policy paper, “Sustaining San Francisco’s Living History: Strategies for Conserving Cultural Heritage Assets.”

San Francisco Tries to Combat the Business Side of Gentrification
Next City
July 2, 2015

“These long-term businesses … are not just businesses but really are part of these communities,” says Campos. “There’s a personal, emotional attachment that comes with a lot of these businesses.”

San Francisco Officials Want to Help Save the City’s ‘Legacy Businesses’
KQED News
June 10, 2015
“They have a very important part in the character of these neighborhoods, and unless the city makes an investment in helping them, they’re going to fail,” says Supervisor David Campos, who is sponsoring the legislation along with supervisors John Avalos, Jane Kim and Eric Mar.