Joe Dimaggio in the Marina

A trailblazing reporter called the Marina District her home

Watch: Short videos on the Marina’s architectural and cultural history on our Youtube channel (look for a new video each week of October 2020!)

Few San Francisco neighborhoods have an origin story as fairytale-like as the Marina District. A muddy cove is transformed into a fantastical fair of courtyards, towers, and light. Then, from the dust of that ephemeral landscape arises a fashionable neighborhood of winding streets, village shops, and a bayside park.

The Marina District is set between the six-lane Lombard Street Expressway and the San Francisco Bay, bookended by two former military installations, Fort Mason and the Presidio. On the city’s northern shore, the neighborhood is made land, former tidelands filled with sand from surrounding dunes and mud piped up from the bay’s floor. In the early twentieth century, most of it was still a shallow cove ringed by a coal-gasification plant, scattered laundry operations, roadhouses, shooting ranges, and a pleasure resort named Harbor View Park. 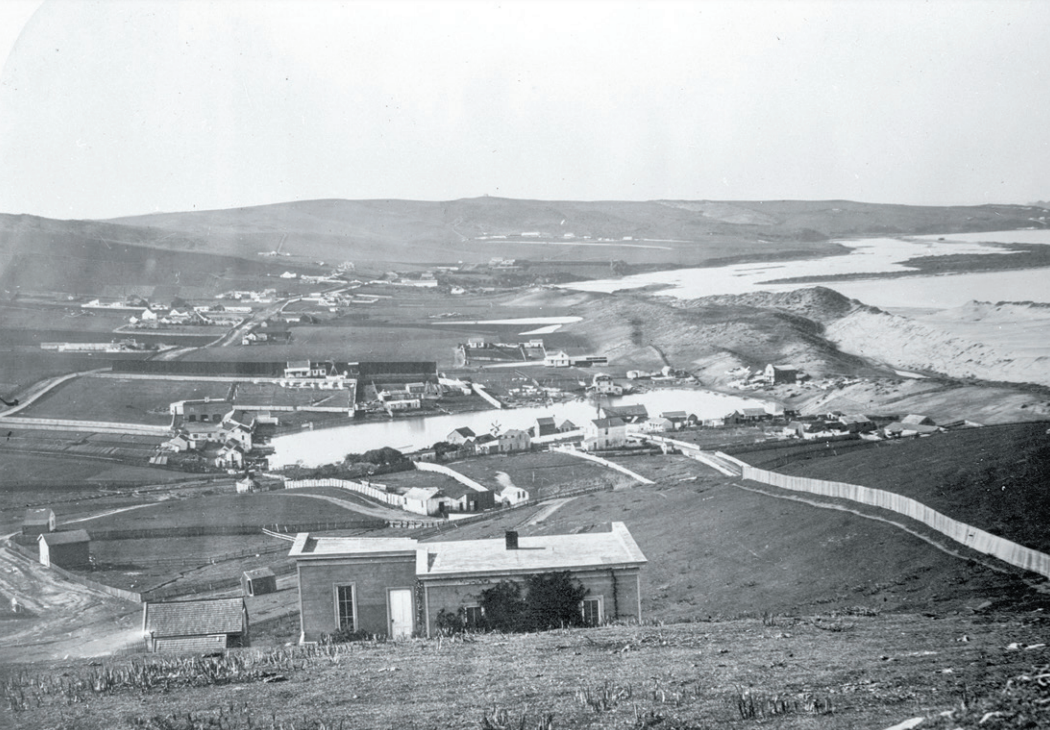 In 1911, San Francisco won the right to host a world’s fair to celebrate the completion of the Panama Canal, and the following year an organizing committee leased land and “water lots” on the bay from Theresa Oelrichs and Virginia Vanderbilt for the exposition. From today’s Lyon Street to Buchanan Street, 475,000 cubic yards of dirt and sand filled in and smoothed out a landscape for what would be called “The Jewel City.”

Although the 1915 Panama Pacific International Exposition (PPIE) lasted just one year, it was a showcase of design, color, and architectural exuberance. The 435-foot Tower of Jewels acted as centerpiece to a vista of statue-lined courtyards, iridescent domes, and majestic halls inspired by ancient monuments. Fair buildings were intended and constructed to be temporary and at the exposition’s conclusion all were demolished or relocated with the exception of architect Bernard Maybeck’s beautiful lagoon landscape of colonnades and rotunda for the Palace of Fine Arts. 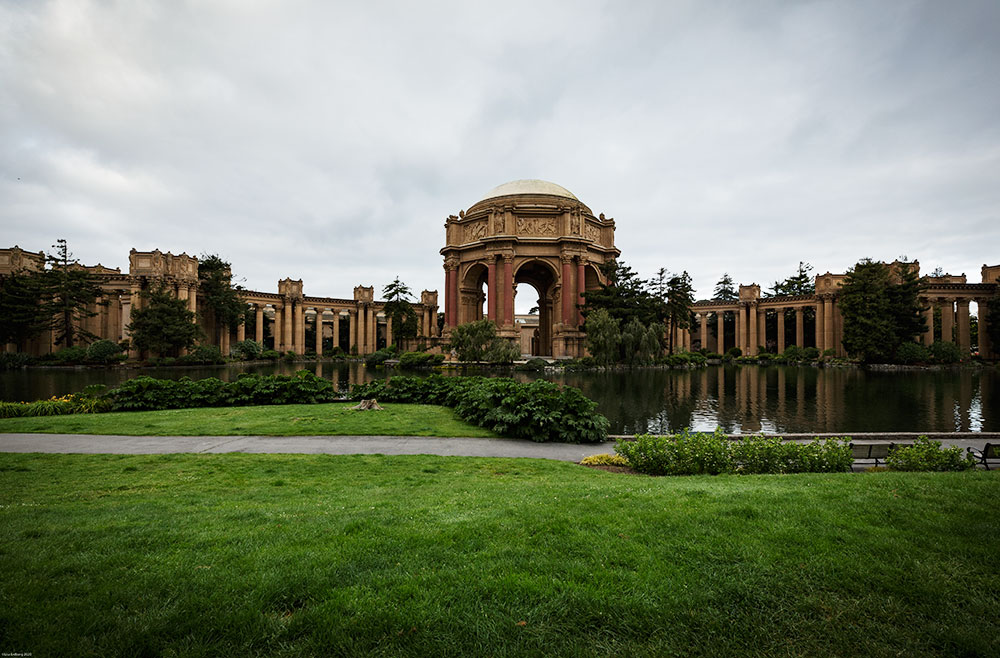 The fair had a “Palace of Fine Arts Preservation Day” on October 15, 1915, to raise money for the preservation of Maybeck’s masterpiece. By the 1960s, Maybeck’s haunting masterpiece had badly deteriorated and needed saving once more. After a citizen-led fundraising drive, the rotunda and colonnades were rebuilt in concrete.

Before 1915, the future Marina District was generally known as Harbor View after a small bayside bathing and pleasure resort. Developers rechristened it the Marina once single-family houses and apartment buildings began going up on the former exposition site in the early 1920s. 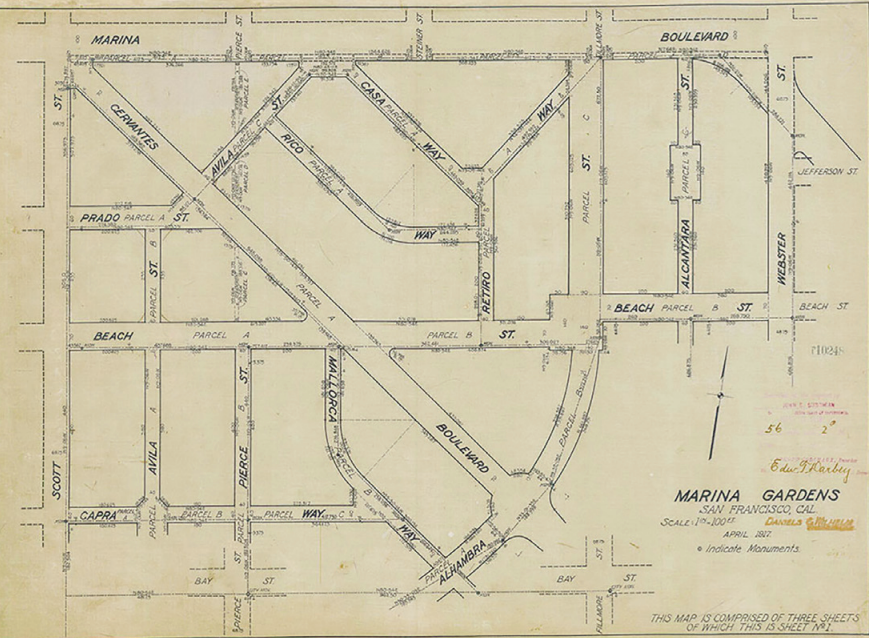 Built out quickly in the 1920s and early 1930s, the Marina reflects that era’s popular styles: Period Revival, Streamline Moderne, and Art Deco. The designated commercial corridor of Chestnut Street is the district’s a main-street with markets, restaurants, bars, two movie theatres, and a number of legacy businesses such as Lucca Delicatessen and Izzy’s Steaks and Chops. 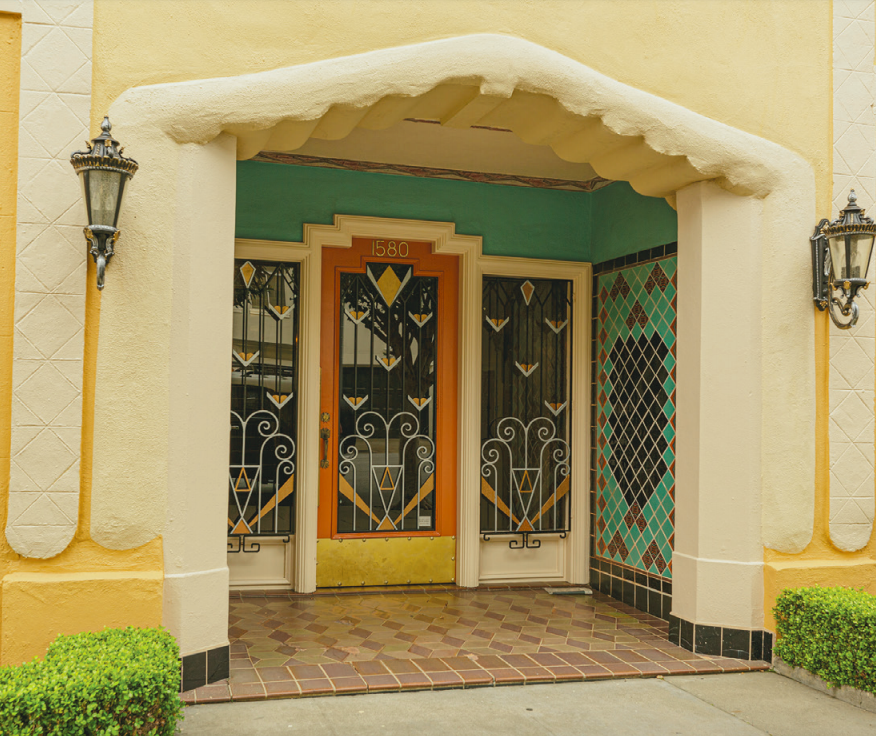 Doorway of an Art Deco apartment building in the Marina District. (Photo by Lisa Erdberg.)

While the Palace of Fine Arts, the San Francisco Gas Light Company Building on Buchanan Street, and the Marina Branch Library on Chestnut are city landmarks, there are significant buildings in the Marina without any form of historic designation or special protection. Outstanding Period Revival homes stand around Baker Street. Many elegant apartment buildings with elaborate entryway treatments could comprise a historic district. 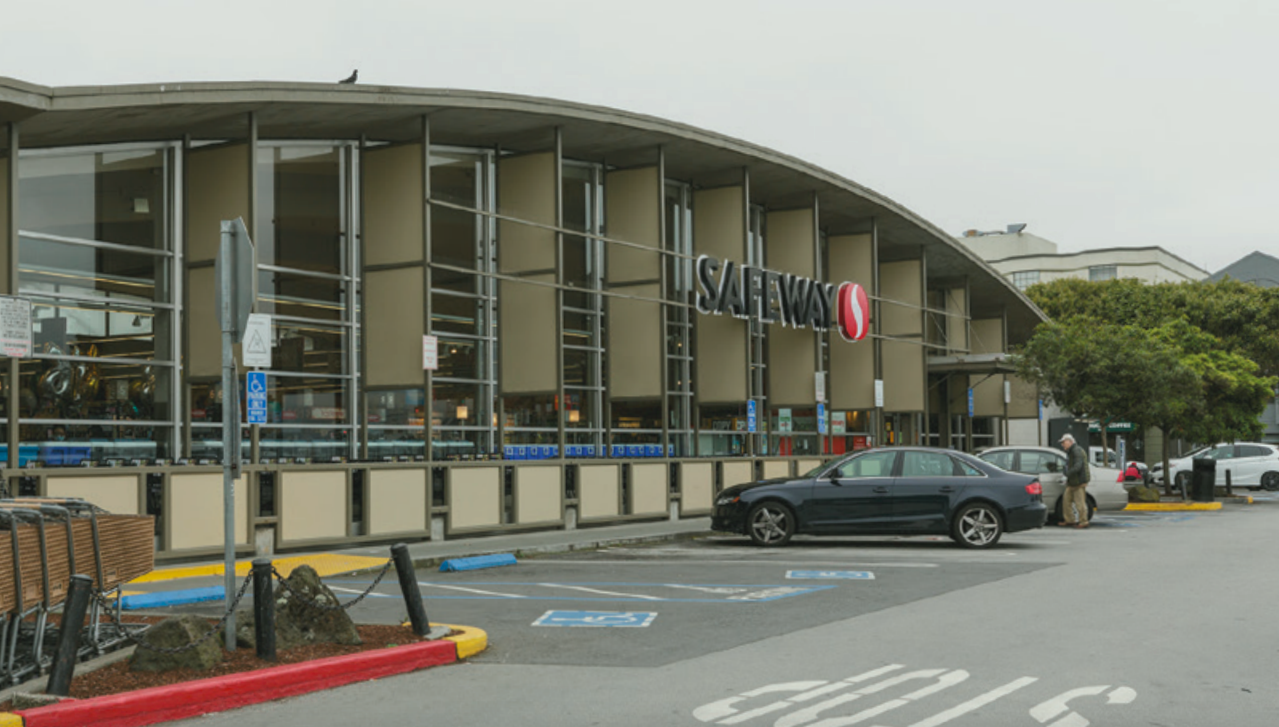 The Marina Safeway, built in 1959, is one of the significant Modern-style buildings in the district. (Photo by Lisa Erdberg.)

The New Deal-era Marina Middle School designed by master architects John Bakewell, William P. Day, and George W. Kelham stands as a prominent example of what might be called “WPA Moderne.” The Marina Safeway is a Midcentury Modern jewel by architect William Wurster, and the seminal model for hundreds of the supermarket chain’s stores across the country.

Since the 1980s, the more than 2,900 apartment units in the Marina have proven attractive to young professionals. The district’s commercial corridors of Chestnut and Lombard Streets shifted to meet the interests of this population, filling with fashionable restaurants, cocktail lounges, and trendy clothing shops.

The Marina is blessed with recreational sites and open space with its large Moscone Playground as well as the Presidio, Fort Mason, and Marina Green on three sides. Views of the bay and the Golden Gate, the architectural style and design unity, and the vibrant street life all make the Marina one of the city’s most attractive neighborhoods.

Kerri and Woody introduce the history of the Marina District in this webinar. And just… Read More

Cinema Treasures in the Marina

**Save the date for our next Marina Heritage gathering/walking tour of the neighborhood, happening on August 28, 2021, time tbd. If you would like to attend, please send Kerri an email at kyoung@sfheritage.org for the details.

Two-part series by Christopher VerPlanck chronicling the development of the Marina District, appearing in the Summer and Fall 2007 issues of Heritage News