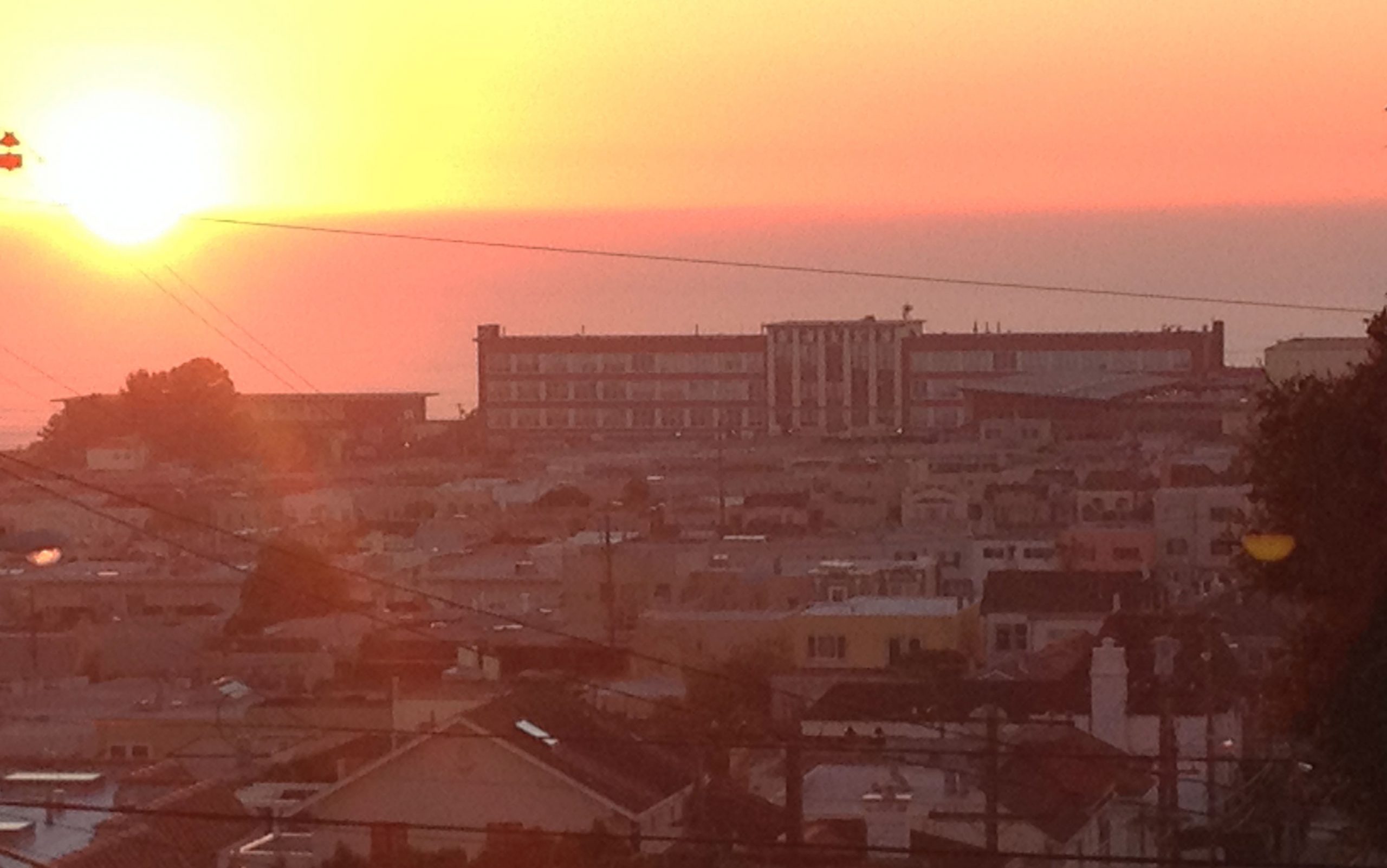 From its early twentieth century origins into the 1970s, the Parkside District was overwhelmingly white. Pressure from neighborhood groups and understood-if-unwritten agreements with real estate agents kept it that way after courts prohibited housing discrimination. But while able to hold off minority ownership and occupancy, Parkside residents couldn’t stop the San Francisco public school system from introducing students of color to the neighborhood.

In the late 1960s and early 1970s, Lincoln High School became where the Parkside had to confront the country’s longstanding (and continuing) racial discrimination and inequities, led by politically aware students.

In December 1968, as nearby San Francisco State was embattled by protests and violent responses from campus leadership, students at Lincoln High School were inspired to do their own organizing with a planned boycott of classes and a march on the school’s administration building to address poor treatment of Lincoln’s black student body. (The San Francisco Chronicle asserted they were “prodded by visiting militants” to do so.) A group of African-American and white students presented a list of ten demands, including an increased black curriculum and the addition of “soul food” options in the school cafeteria. School district representatives met with the students to promise plans for an expanded curriculum, a willingness to address other concerns, and conducted direct telephone outreach to Lincoln parents to report on the whole affair. Principal Reginald Alexander said, “Our dialogue with the students today was to show that we are willing to give that little extra and take that extra step.”1

But two months later, Lincoln’s school cafeteria was the scene of what the San Francisco Examiner called “another battle between black and white students,” with chairs thrown and knives drawn. Police tactical squads and outside activist groups, reportedly including members of the Black Panthers, both came to the campus in response. To defuse tensions, the administration dismissed black students, directing them to head east to 19th Avenue.2 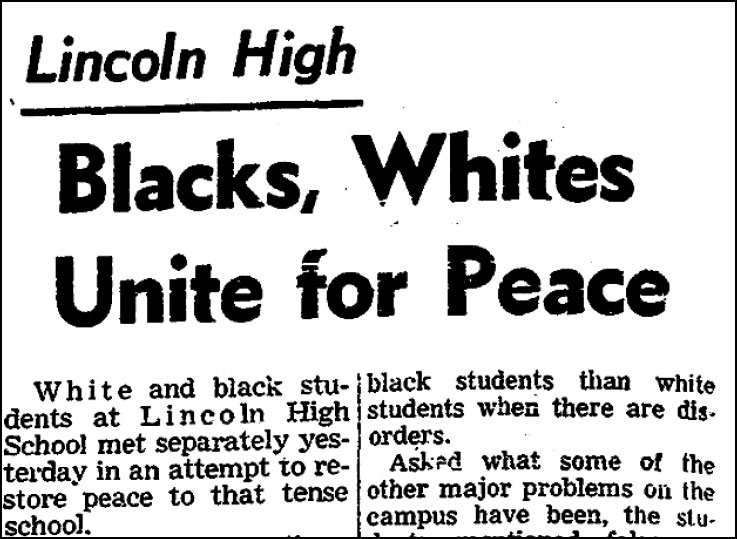 Three days later, on February 28, 1969, black and white student leaders held a number of meetings to reach an accord, with representatives from both sides saying the “police were—and always are—harder on black students than white students” and also agreeing that rumors, fears, some racist teachers, and many disengaged instructors were the main troubles on campus.3

In June 1969, a group named Concerned Black Parents turned out hundreds of students and parents from Lincoln High School to disrupt a city School Board meeting with clapping, chants, and jeers. William Jones, the group’s president, supported by teachers union Local 61, demanded a chance to speak, shouting across a line of police with batons, as students cheered him on. Fifteen speakers addressed the board protesting the Lincoln administration’s transfer of a black teacher, Yvonne Golden, who was described as “a superior teacher, a positive influence on students of all races and a leader in establishing good relations in the community.” Many of the speakers asserted that racism was behind the transfer request.4

The Board of Education, with advice from its legal counsel, eventually agreed. Principal Alexander had asserted that Golden’s teaching was unsatisfactory, but his previous evaluations belied that claim. Teachers Union officials charged that her sponsorship of a new Lincoln Black Students Union (BSU) and her attempts to have a memorial ceremony on campus in honor of the assassinated Martin Luther King, Jr., were behind the transfer request.5 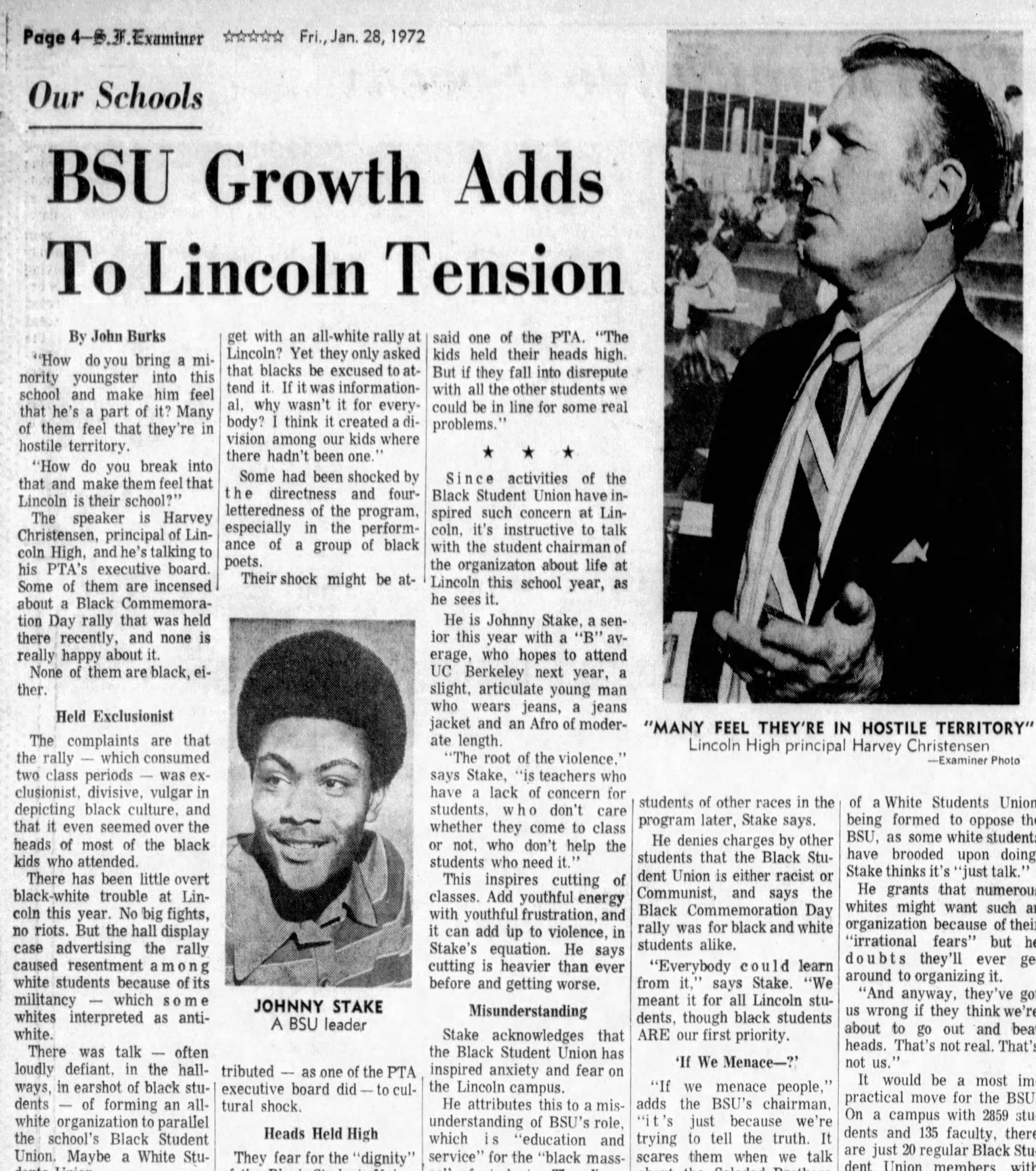 By 1972, the Black Students Union ran an after-school program with black students tutoring other black students, and held events such as a Black Commemoration Day rally. The latter caused a backlash from white students, with some calling for a “White Students Union,” and a fiery meeting of the school’s Parent Teacher Association executive board. A reporter noted of the board members that, “…none is really happy [about the rally]. None of them are black, either.”6

Johnny Stake, the student chairman of the BSU, had to deny the union was racist or Communist, and astutely noted that concerns about a school organization with 20 regular members on a campus of 2,859 was all about “irrational fears.” The BSU’s role was education and service to black students with a goal of combating racism. “If we menace people, it’s just because we’re trying to tell the truth.”7

Lincoln’s principal, Harvey Christensen, admitted that many black students felt they were “in hostile territory.”8

Busing programs to desegregate the city’s schools in the early 1970s, accentuated racial mistrust and fears on the west side of town. In 1972, Lincoln’s PTA meeting drew 300 angry and frustrated parents, teachers, and students claiming the school was rife with extortions, thefts, vandalism, and racism. There were calls for armed guards and undercover police. Complaints came from white and black parents about the safety of their children and warnings about race riots. Black parents and students expressed their discomfort walking the streets of the mostly white Parkside and contended that black students were unfairly disciplined and discriminated against in the school.9

Rhetoric and concerns were so pitched that a new community group, the Sunset-Parkside Education and Action Committee (SPEAK, still in existence today), conducted a safety survey of students, teachers and principals at all eleven Sunset and Parkside area public schools, including Lincoln High School.

SPEAK concluded the number of students “fearful for their safety is far greater than the number of actual incidents,” and that “fear seems as important a quality to lessen as the violence itself.”10

Racial conflicts and fear at Lincoln High School and in the Parkside continued and also changed as the neighborhood’s all-white identity began to shift.

Our Program “Rooted in Resilience” is now online