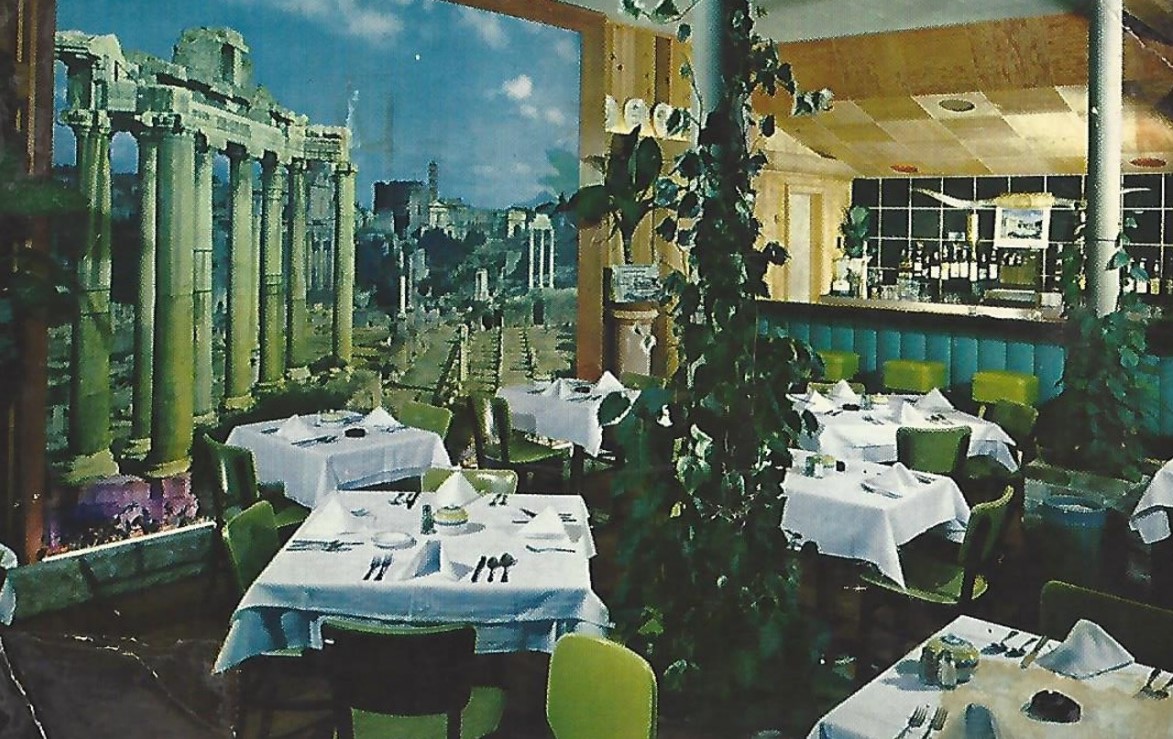 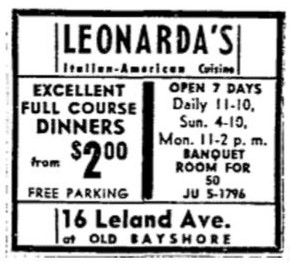 An ad for Leonarda’s in 1961. Courtesy of the Visitacion Valley History Project.

What is today a parking lot serving the Bank of America at Bayshore and Leland was once the site of a popular Italian restaurant called Leonarda’s (16 Leland Avenue). Owned by Leonarda “Lee” and John Concerti in the 1950s and 60s, the restaurant served up breakfast, lunch, and dinner to the locals in Visitacion Valley. Oral historian Celeste Jimenez fondly remembers the live music served up with the food on weekends in the 1960s.

After its sale, the property evolved into a lesbian bar in the 1970s. Run by Peg Clark and Val Souza, Leonarda’s was famed for its Sunday brunches and live entertainment, such as these 1971 performances by singer Maxine Weldon. 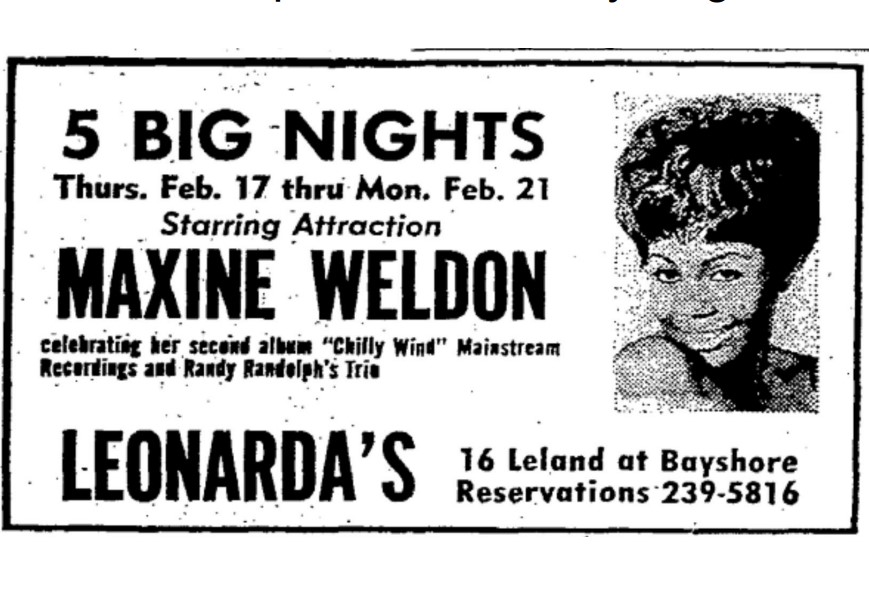 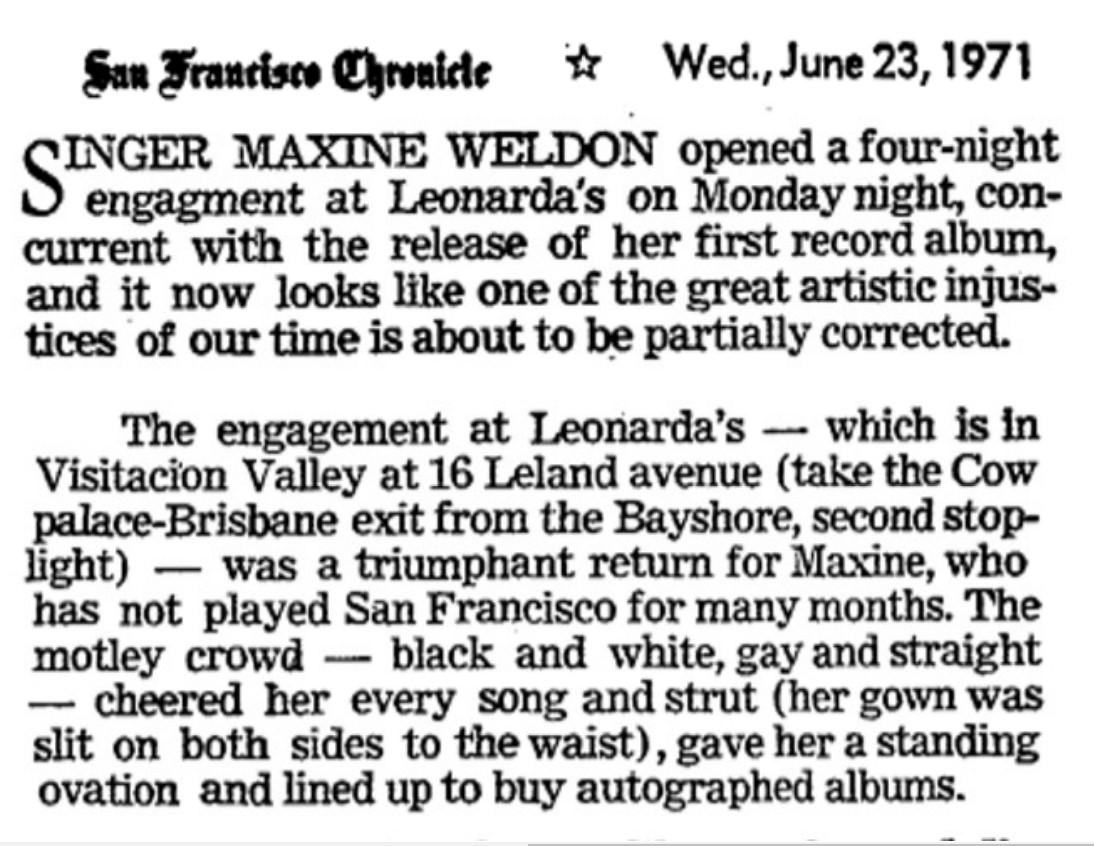 Clippings from a June 1971 piece on singer Maxine Weldon and Leonarda’s in the San Francisco Chronicle.

In Bodies of Evidence: The Practice of Queer Oral History (2012), a former patron recalls what it was like there:

Cheryl Gonzales: Yeah. Oh yeah. There was a club out by the Cow Palace that called Leonarda’s, and it was a nightclub. Thelma Davis might have told you about Leonarda’s because that where I met her. Women were in drag. Women dressed in drag. It was definitely couples, and when you walked in, you knew who the butch was and you knew who the fem was. There was unspoken rules about dancing with someone’s girlfriend. There was a lot of fights in the bars at that period of time. Coupled with alcohol, you know, it can be very violent. 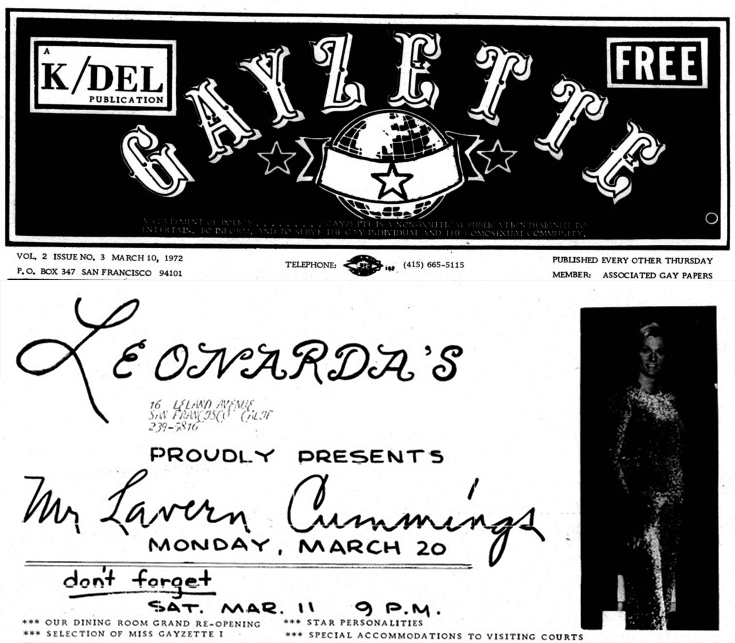 A notice for a show at Leonarda’s in the March 1972 issue of the Gayzette, featuring famous female impersonator and singer Laverne Cummings.

Despite cases of discrimination within queer communities in the 1960s to 1980s, a number of gay and lesbian bars in San Francisco were known for welcoming a mixed clientele or known for catering to queers of color, including Leonarda’s. According to an oral history with Sharon Tracey, the Visitacion Valley bar was welcoming to African American lesbians.

If you have more on the history of Leonarda’s, or can share any photos, The Visitacion Valley History Project would love to hear from you! Email VisitacionValleyHistoryProject@gmail.com

Thanks to research from the Visitacion Valley History Project and the Citywide Context Statement for LGBTQ History in San Francisco (2016) p. 179, by Shayne Watson and Donna Graves.

The exterior of 2 Hahn Street in Visitacion Valley. By Kerri Young For this Fun… Read More