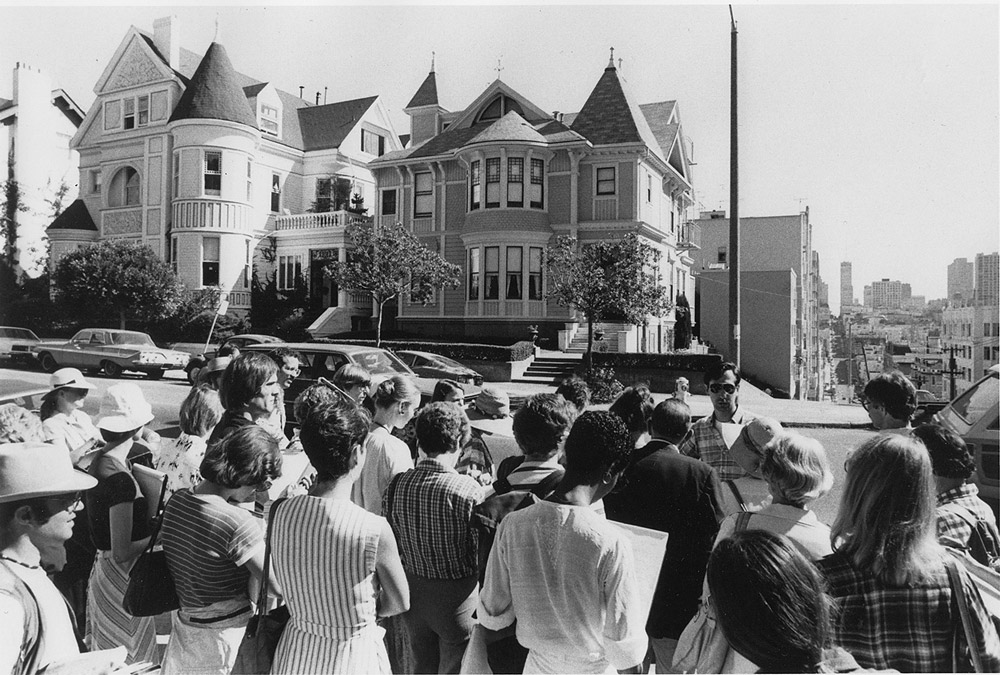 Delehanty and photographer Gigi Carroll created the first presentation given by Heritage, a slide show on San Francisco’s Victorian Domestic Architecture given at the American Institute of Architects convention in May 1973. Heritage then produced a fall lecture series on Bay Region Style Architecture with an all-star line-up of architectural historians: David Gebhard, Richard Longstreth, and Kenneth Cardwell. Heritage lectures have remained an annual tradition ever since. Over the decades program topics have ranged from Victoriana to Modernism, terra cotta to tamale-making—all with a connection to San Francisco’s architectural or cultural heritage.

In 1973, Heritage had just received the Haas-Lilienthal House and Delehanty designed the first docent-training program to lead public tours of the grand 1886 residence. Docents were given an intense eight-session preparatory course taught by Delehanty, Nancy Melia, and Kris Blackwell. House tours were held on Wednesdays and Sundays, which still remain on the schedule for docents and visitors today. Who was drawn to volunteer for Heritage in its early years? In a 1978 issue of the Heritage Newsletter, training chairman Richard Rothman noted that the docent roster included “three sets of husbands and wives, several homemakers, several people in medical services, some teachers, and people involved in law, graphics, real estate, architecture, and sales.” Rothman also commented “We may be the only San Francisco group that has male docents.”2 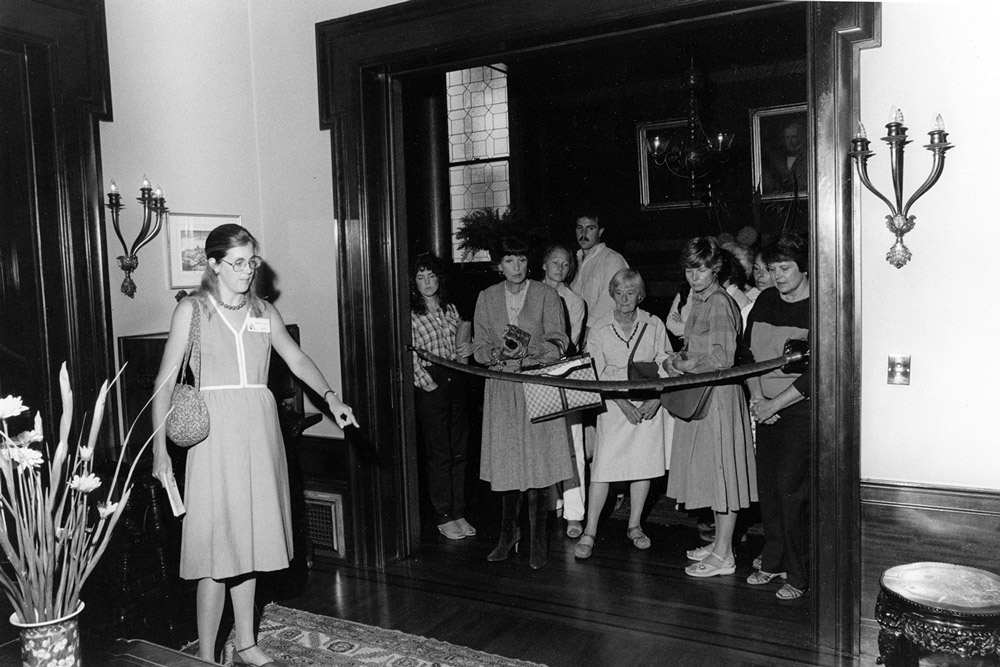 Docent leading a group through the Haas-Lilienthal House in early 1980s. (Heritage archives.)

During that busy summer of 1973, Delehanty also created a series of architectural walking tours of what he called the San Francisco “townscape.” By 1975, he offered a dozen summer tours with help from architect John Woodford and architectural historians Judith Patt and Michael Corbett. Participants trekked around the Civic Center, the Western Addition, the Financial District, Telegraph Hill, Haight-Ashbury, Jackson Square, Pacific Heights, and more.3

In part because of this work, the popularity of walking tours featuring local history and architecture boomed in the city. In 1978, San Francisco City Guides was founded through the San Francisco Public Library to offer free tours. With Victorian expert Judith Lynch leading the new program, many walks featured architectural education and history. Also in 1978, staff member Gay Kunz expanded Heritage’s walk program to train docents for every-Sunday tours of Pacific Heights, the Financial District, Telegraph Hill and North Beach.4 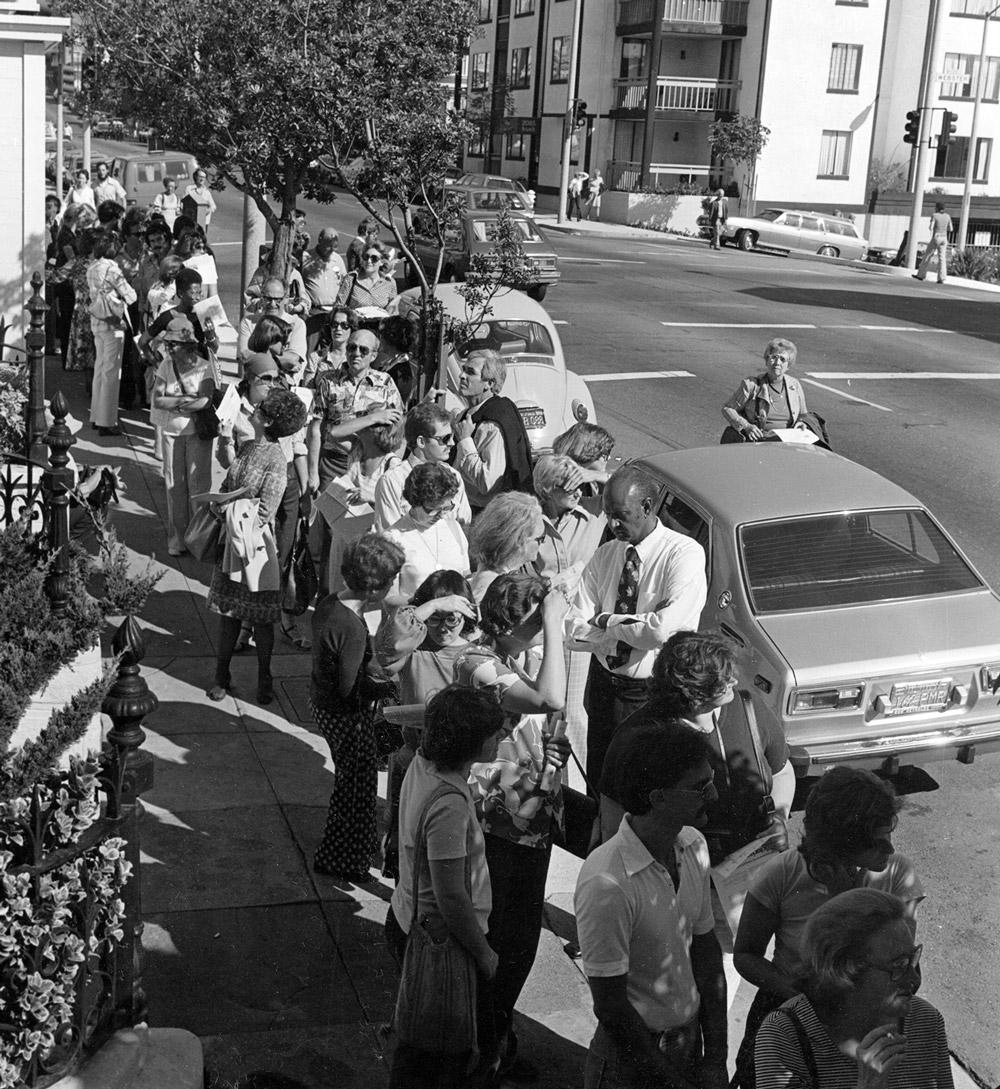 Heritage also produced one-day tours of Victorian houses for a number of years. Thousands took the opportunity to see inside some of the grandest residences of the city and the tours sold out quickly. This idea had been started by The Victorian Alliance of San Francisco in 1975. The nonprofit organization still produces annual house tours in different neighborhoods. (View forty years of informative and attractively designed Alliance tour booklets available at archive.org.)

The vision and leadership of Randy Delehanty, Linda Jo Fitz, and other Heritage staff members created Heritage’s educational programs, but the success of those programs was, and still is, heavily dependent on volunteers. This is evident in just reviewing one year of activities. In 1978, more than two hundred volunteers produced and staffed events and lectures drawing hundreds, led walking tours for hundreds more, and guided 15,000 people through the Haas-Lilienthal House.5 Beginning in the early 1980s, docents also made the popular “Heritage Hikes” for grammar school classes possible. (This program will be featured in a future Heritage 50 post.)

Any review and appreciation of Heritage’s work over the past fifty years has to include recognition of the many, many people who have donated their time to the organization and its mission. We have started compiling a list and hope you’ll help! If you, a friend, or a relative volunteered for San Francisco Heritage anytime in the past, please tell us. We’d appreciate names, the type of work (walking tour leader, bookstore clerk, lecturer, etc.) and roughly the year(s) the volunteer worked. Email Museum and Docent Coordinator Pam Larson at plarson@sfheritage.org.

The Alaska Commercial Building shortly before demolition in the late 1970s. Notice the walruses near… Read More