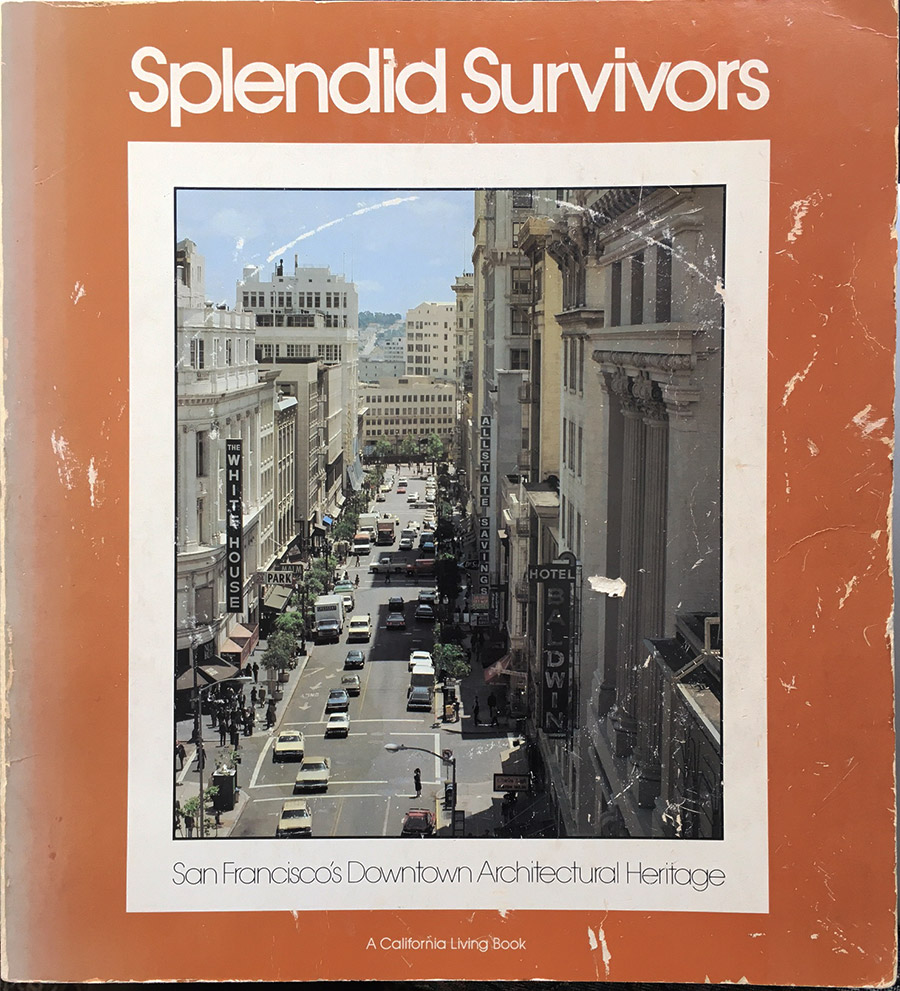 A well-used copy of Splendid Survivors by Michael Corbett.

“Perhaps the single most important effort underway at Heritage is the planning, funding and initiation of a comprehensive survey of the historical and architectural resources of San Francisco’s downtown.” — Heritage Newsletter, November 1976

In 1974, during individual preservation struggles with national and international corporations over the Alaska Commercial Building, the City of Paris department store, and the Fitzhugh Building, Heritage hatched a broader strategy to “anticipate individual threats with an overall plan.”1

The plan: a downtown survey accompanied by a study that would evaluate the economics of retention and rehabilitation of important downtown San Francisco buildings. The hoped-for outcome: increased protections and broader preservation tools such as changes in tax laws, transfer of upward-development rights (“air-rights”), and the creation of historic districts. The added plus: giving developers information on structures and districts considered historic before they committed time and money to a project. The overall goal: guidance to “encourage growth in a manner […] least destructive to the traditional character of the city.”2

By March of 1977, Heritage had raised enough money to begin the work, contracting with Charles Hall Page & Associates, a new firm founded by Heritage’s co-creator. Michael Corbett served as project director and Robin Thomas Sweet as graphic designer. Randolph Delhanty, Joan Draper, and Jeremy Kotas made up a review panel for the survey, and other Heritage staff and volunteers—Ward Hill, Stephanie Turkington, Dale Copland, and Bill Hobson—helped in myriad ways to compile and organize all the data.3 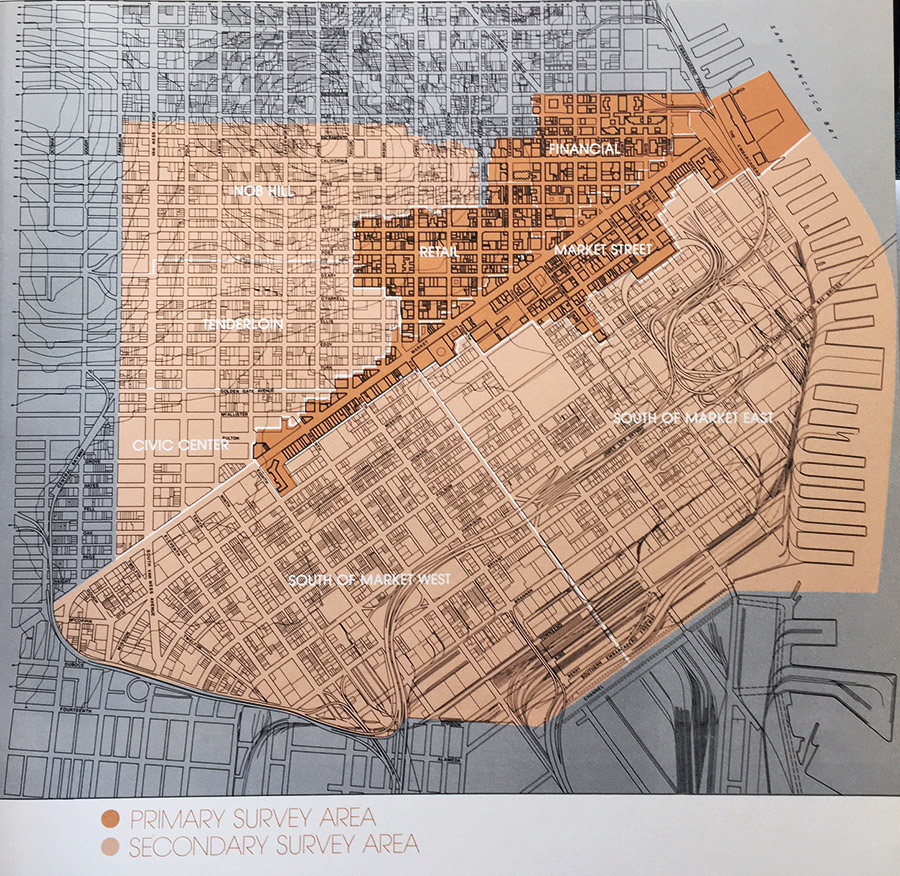 Map of survey areas from Splendid Survivors by Michael Corbett.

A year-and-a-half later, more than 900 parcels had been surveyed and rated on their “architectural, historical, and environmental qualities,” most in the primary project area of the Financial District, Retail District (Union Square), and both sides of Market Street from the waterfront to 8th Street. A select survey of additional buildings was added in the radial adjacent areas of Nob Hill, the Tenderloin, Civic Center, and South of Market. It was considered the first comprehensive architectural survey of a major downtown in the United States.

When the survey started, not one downtown San Francisco building was on the California State Historic Resources Inventory, a list of cultural resources considered significant by the state. At the conclusion of the Downtown Survey, 374 individual buildings, eight historic districts, and four thematic groups were identified as eligible and submitted to the State Office of Historic Preservation.

More than just an inventory, the project included a compilation of building histories, architect biographies, field photographs, and evaluations of styles, condition, and importance. Belying the misrepresentation of preservation as anti-growth, a number of “sites of opportunity” were also designated as good development targets for remodeling and new construction. This was all conducted with outreach to and partnerships with real estate interests, business alliances, community organizations, and government agencies, including close cooperation with the city planning department.

The three main products of the Downtown Survey were an inventory report with a summary of the findings, a technical report on the survey framework, and hundreds of files of information on the parcels examined and evaluated. At the time, Heritage considered the project its “most significant contribution to the preservation of historic San Francisco architecture.”4 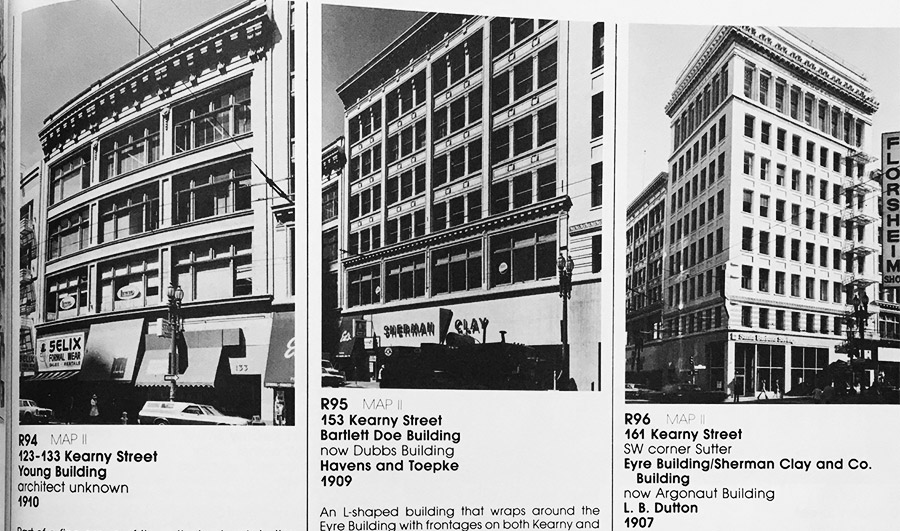 In 1979, the completed inventory of 790 downtown buildings constructed before 1945 were published by California Living Books as Splendid Survivors: Downtown San Francisco’s Architectural Heritage. More than 3,500 copies sold in the first few months and the San Francisco Chronicle hailed it as a “landmark of urban literature.”

For all the acclamation and positive reviews, the project’s genesis was to serve preservation and address the ongoing and escalating threats to potential historic buildings and districts. While Michael Corbett was refining the last drafts of Splendid Survivors, a dozen new high-rises were under construction downtown and six others proposed. The battles for the Alaska Commercial and Fitzhugh buildings had been lost and the City of Paris would go on to be demolished in 1981.

The question of whether the Downtown Survey could make a difference was an open one, but it would be answered quickly.