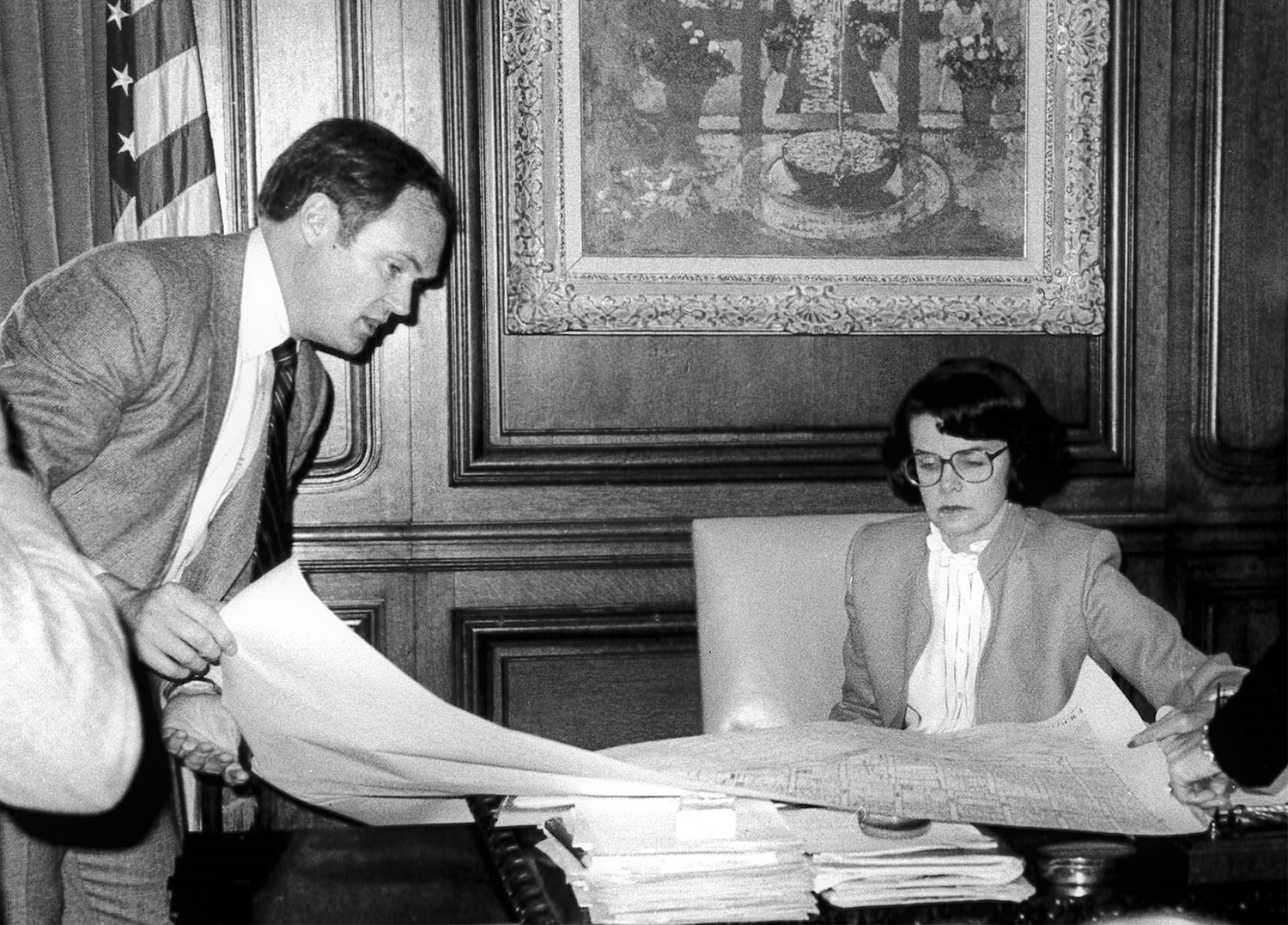 Heritage’s Downtown Survey, conducted in 1977–1978 and immortalized in the book Splendid Survivors, shifted dynamics between the young nonprofit organization and the San Francisco Planning Department. Often on opposite sides of the table in individual preservation battles, Heritage and Planning became partners in the survey, working together to identify evaluation ratings and methodologies compatible with San Francisco’s architectural landscape and history. Planning Director Dean Macris demonstrated the level of growing mutual respect when he nominated Splendid Survivors for a national award from the National Trust for Historic Preservation.1

This new shared understanding and the project’s completion reaped dividends almost immediately. Survey ratings of historic buildings from the survey began being cited in environmental impact reports (EIRs), in public hearings, and in the media. In May 1980, the Planning Commission adopted an official list of significant downtown buildings, incorporating all of the “A-” (highest priority for preservation) and “B–rated” buildings listed in Splendid Survivors. Importantly, the consensus of opinion over the validity of building ratings began to change development plans. Instead of a rumored proposal to demolish the Hunter-Dulin Building at 111 Sutter Street, Crocker Bank incorporated preserving both it and the ground floor of the banking temple at 1 Montgomery Street in its new headquarters plan.2 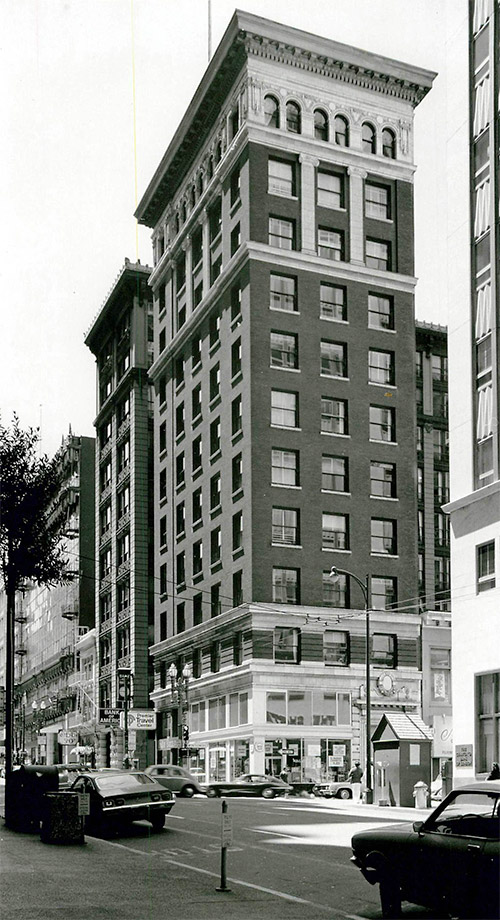 When corporations didn’t retain historic buildings in their development designs they faced the potential of true resistance from city agencies. Splendid Survivors’ rating and historical information for 105 Montgomery Street was influential in the Planning Commission’s rejection of a demolition proposal for the California Pacific Building in 1981.3

Despite individual wins, intense pressure on San Francisco real estate continued to eradicate historic structures downtown. In the two years after Splendid Survivors was published, three of its A-rated buildings, nine of its B-rated, and 16 of its C-rated buildings were demolished. In the downtown survey’s “secondary areas,” the story was the same. South of Market Street redevelopment for the Moscone and Yerba Buena Centers endangered historic warehouses and boarding houses. Low-income Tenderloin apartment buildings from the early 20th century were targeted for replacement by large hotels.4

On May 7, 1982, Mayor Dianne Feinstein met with Heritage staff in recognition of Historic Preservation Week in San Francisco. More than just a photo op, executive director Grant Dehart and Splendid Survivors author Michael Corbett made sure to show her a map of historic buildings demolished in the three years since the book had been published.

But the tide of public opinion began to turn against new downtown high-rises. Office space in downtown San Francisco had more than doubled between 1965 and 1981 and various interest groups united to resist the “Manhattan-ization” of San Francisco.

The Planning Department began drafting “Guiding Downtown Development,” a new policy report that included preservation guidelines heavily reliant on Heritage contributions and input, including ideas from a Heritage-commissioned study by John Sanger and Associates, “Preservation Strategy for Downtown San Francisco.” Heritage also extended surveying with more information on the downtown’s secondary areas and by 1983 had delivered to the city an additional 1,500 building evaluations in the C-3 zoning area. As the Planning Department put out revised versions of its growing guideline and policy recommendations, the report began being called simply “The Downtown Plan.”

Elements of the plan appeared on five different ballot propositions over the next few years, but in the end only one of these “anti-high-rise” propositions—a measure around shadow-casting over certain parks—succeeded in being passed. Finally, in September 1985, the Board of Supervisors adopted a Downtown Plan by a one-vote margin.

In addition to new design guidelines, limits on new office construction, a lowering of building heights, and a requirement for developers to contribute open-space parks onsite, a number of preservation elements were established. Two-hundred-and-fifty top-rated historic buildings were listed as resources to be conserved, while the retention of 182 contributory buildings was “encouraged.” Six historic districts were created. Transfer of Development rights (TDRs) allowed development potential from historic downtown buildings to be siphoned to other sites.

San Francisco Examiner wondering if the Downtown Plan would lead to a “snazzier” city, September 11, 1985.

The Downtown Plan did not relieve the city’s development pressures, nor did it satisfy most preservationists or those hoping to stop the proliferation of skyscrapers. My favorite quote is from San Francisco Examiner columnist Bill Mandel who wrote that the “Downtown Sham” promised “to control San Francisco’s permanent case of high-rise fever about as well as Casper Weinberger controls the Pentagon’s spending spree.”5 The glass towers did indeed keep coming, redirected a few blocks to South of Market as evidenced by today’s mirrored- and smokey-glass jungle ruled by the polarizing Salesforce Tower.

But there is no doubt the plan saved hundreds of significant historic structures and kept intact relevant streetscapes that could have been shattered apart by the invasion of single ill-conceived boxy office building. The preservation elements of the Downtown Plan germinated from Heritage’s survey work, Heritage’s downtown strategy reports, and the publication of “Splendid Survivors.” Linda Jo Fitz, Heritage’s first employee, has said the effort, in sum, was the most important thing Heritage has ever done.

Heritage 50: The Fight to Save the Fitzhugh Building

The Alaska Commercial Building shortly before demolition in the late 1970s. Notice the walruses near… Read More

Heritage 50: The Fight to Save City of Paris in Union Square