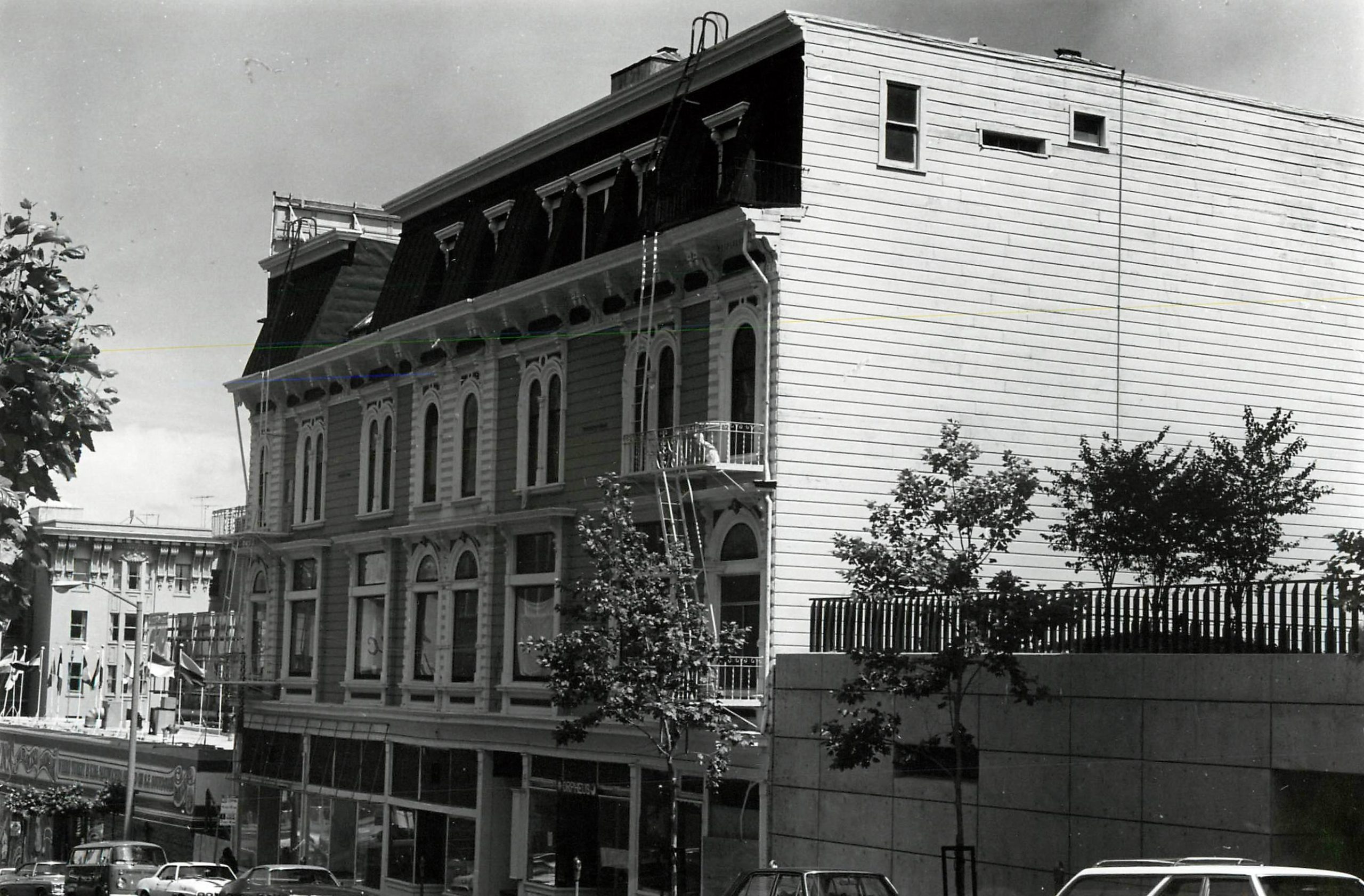 Located at 1117 Geary between Van Ness and Franklin streets, the Goodman Building was saved from destruction at the hands of San Francisco’s Redevelopment Agency (SFRA) by artist commune the Goodman Group in the 1970s. Built as four Victorian residences in 1860 and converted to a residential hotel to fill housing needs after the 1906 Earthquake and Fire, for decades the building served as a center for art, performance, and learning. 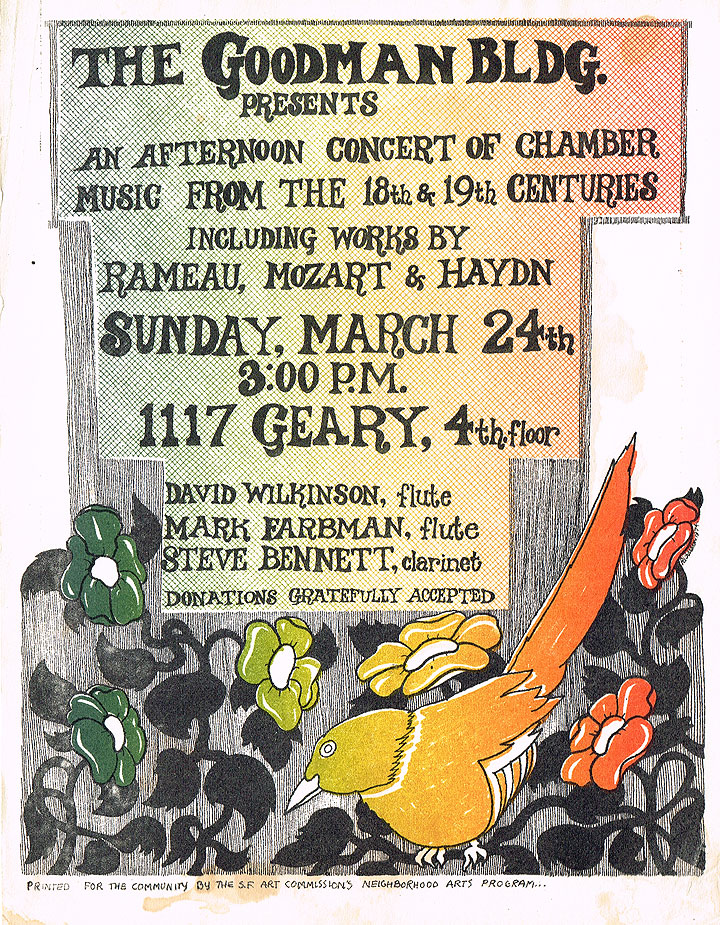 An example of an event held at the Goodman Building, on March 24, 1974. Foundsf.org.

As the last survivor of low rent, easy access, communal living spaces in the city, the Goodman Building had received many refugees from artists’ hotels across the city when they were demolished or converted to more profitable uses. In piece posted on FoundSF, Martha Senger described the Goodman Building’s community of artists during the early 1970s:

When I first moved in, some thirty artists and assorted visionaries lived there, including an anthropologist-filmmaker, an architect-astrologer, a Buddhist printmaker, two leaders of the neo-Dada movement, and a quite mad concert pianist on the top floor. Janis Joplin had lived in a small room on the second floor in the early sixties, as had Wes Wilson, who created the first Psychedelic posters in his studio there…People would emerge from their private spaces to exchange ideas in the hall, the dining room or kitchen, then disappear into another’s studio to look at their work or perhaps borrow a piece of equipment or get advice on some technique. Invariably they’d be given some information or opportunity they had been seeking though perhaps not consciously. 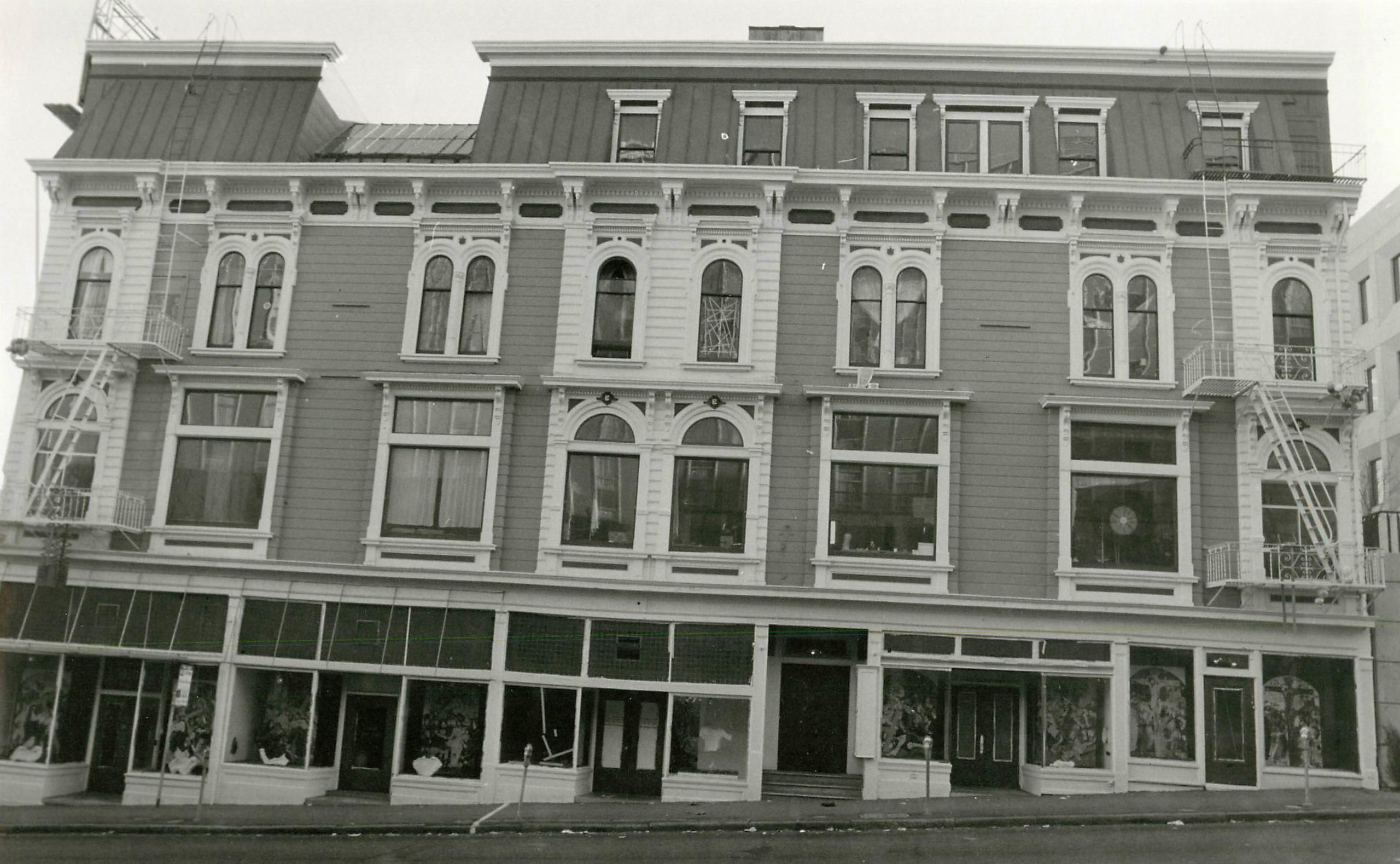 When the building was acquired by the SFRA in 1973, residents found eviction notices plastered on their doors. Tenants fought for their home for the next 10 years, meeting weekly to plot strategy, writing grants, and brainstorming alternatives to the city’s proposals for the building. Dozens of organizations rallied to the cause, including San Francisco Heritage. The Board of Supervisors unanimously designated the Goodman Building as a San Francisco Landmark on January 20, 1975 in an appeal hearing which overruled the Planning Commission and upheld a SF Landmarks Board vote. According to Senger, many supervisors made it clear they were supporting the designation not because of the building’s architectural significance, but because of its use by artists and the special value of that. The Goodman Group also successfully advocated to add the building to the National Register of Historic Places on June 18, 1975, which made the building eligible for rehabilitation grants. The Goodman Group’s continuing efforts to save the building also included working with the Landmarks Board to prevent demolition of eight attached (rear) Victorian flats.

In June 1976, the Goodman Group, acting under Heritage’s sponsorship, received a grant of $10,000 from the National Endowment from the Arts to support “a full-scale program of research and feasibility planning designed to save the building, and to further develop its cultural resources for the community and its residents.” To perform the task, the Goodman Group retained architectural and planning firm Marquis Associates to conduct a broadly based, multi-disciplinary study. The study was aimed at providing low-cost housing for the present occupants of the building, allowing residents to perform as much self-help as possible in improving the structure, making the building as safe as possible in case of fire, and bringing mechanical systems of the building up to code. These aims were determined through much participatory planning between building residents and their consultants. The study showed definitively that it was economical to save the Goodman Building if they pursued a low cost, low impact rehabilitation.

Senger on what it was like during their fight:

Plus, the whole time we were creating complex strategies for saving the building…Also, people’s individual work flourished at an unprecedented level throughout all this with the ongoing support of the Group which, unbelievably, met every Monday night for ten years! It was this that kept the whole thing sane and centered through an incredible number and variety of activities and changes.

Then the Goodman Group formed a nonprofit development corporation, called GOODCO, that put these strategies together in an offer and presented it to the SFRA. However, Redevelopment refused their offer, claiming that the residential hotel rehabilitation plan did not fit their standards for individual self-contained ‘units’ with their own kitchen and baths.

Thus, the residents managed to successfully save the building from demolition, but they themselves lost it as a living space and were evicted in 1983 (the building was given to a developer for transformation into low-income housing). In a letter to the Redevelopment Agency, SF Chronicle architectural critic Allan Temko wrote: “Now that the building is to be saved, are we to lose everything we fought for?” 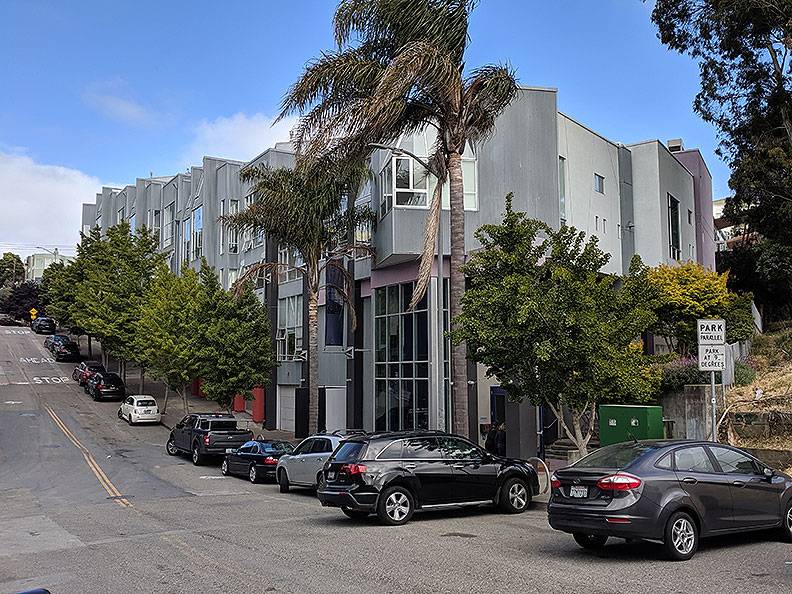 The Goodman 2 building in 2019. Photo by Chris Carlsson.

In the end, the Goodman Group’s protest did bring a key concession. The city, under then-Mayor Dianne Feinstein, offered the displaced artists $570,000 to find a new building. But Senger and others found nothing they could afford, and many of the residents moved to the Cadillac Hotel in the hard heart of the Tenderloin, or left the city. Thirteen years after they were evicted from the old Goodman Building, the remaining artists, which changed their nonprofit from GOODCO to ARTSDECO (Artspace Development Corporation), found a new place to live and create in 1996. “Goodman 2,” as the new arts community was called, was built with 30 studios wrapped around a three-story atrium with a sunny back garden at 18th and Arkansas in Potrero Hill.

Today, the original Goodman Building houses a mix of office space and retail shops, and ARTSDECO owns and operates below market rate live/work units at Goodman 2 dedicated to working artists from San Francisco.