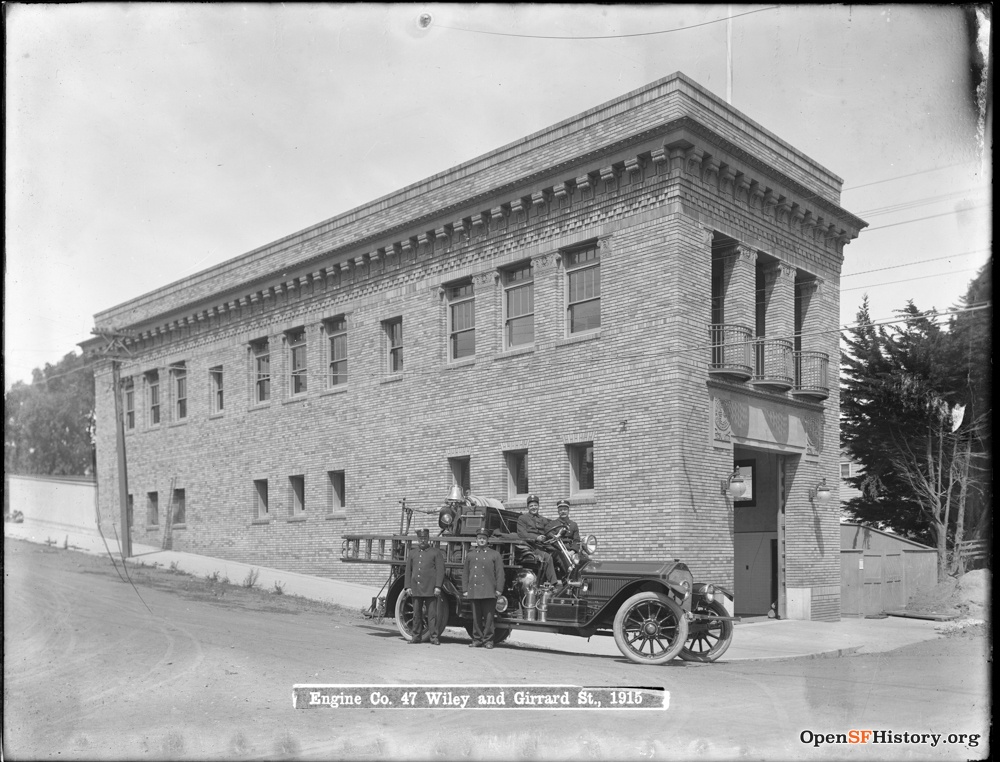 There are no designated San Francisco landmarks in Visitacion Valley. From the official list of 292, the nearest are the University Mound Old Ladies Home building, over the John McLaren park ridgeline at 350 University Avenue, and the Arthur H. Coleman Medical Center at 6301 3rd Street. Both are also fairly recent additions (#269 and #279).

Sadly, this is not surprising. Heritage established its Landmark Fund in 2017 because the list of city landmarks “heavily favors master architects and downtown edifices, leaving large swaths of the city and entire ethnic groups largely unrepresented.” Humbler structures in outlying neighborhoods have a tougher path to recognition, their significance more likely connected to working class people and marginalized cultural communities.

For Visitacion Valley month we’ve already highlighted a number of historic and interesting structures worthy of attention, but would have a hard time getting landmark status. Some are already approved for demolition (186-198 Leland Avenue, see more in this post). Some may rank too high on the quirk factor to get the nod from too-serious commissioners and supervisors (the castle complex, in this post, is one of my favorites).

But even in a neighborhood like Visitacion Valley—fairly contained in size and unfairly overlooked in reputation—there are multiple obvious landmark candidates. Here are three “easy ones” in my mind: 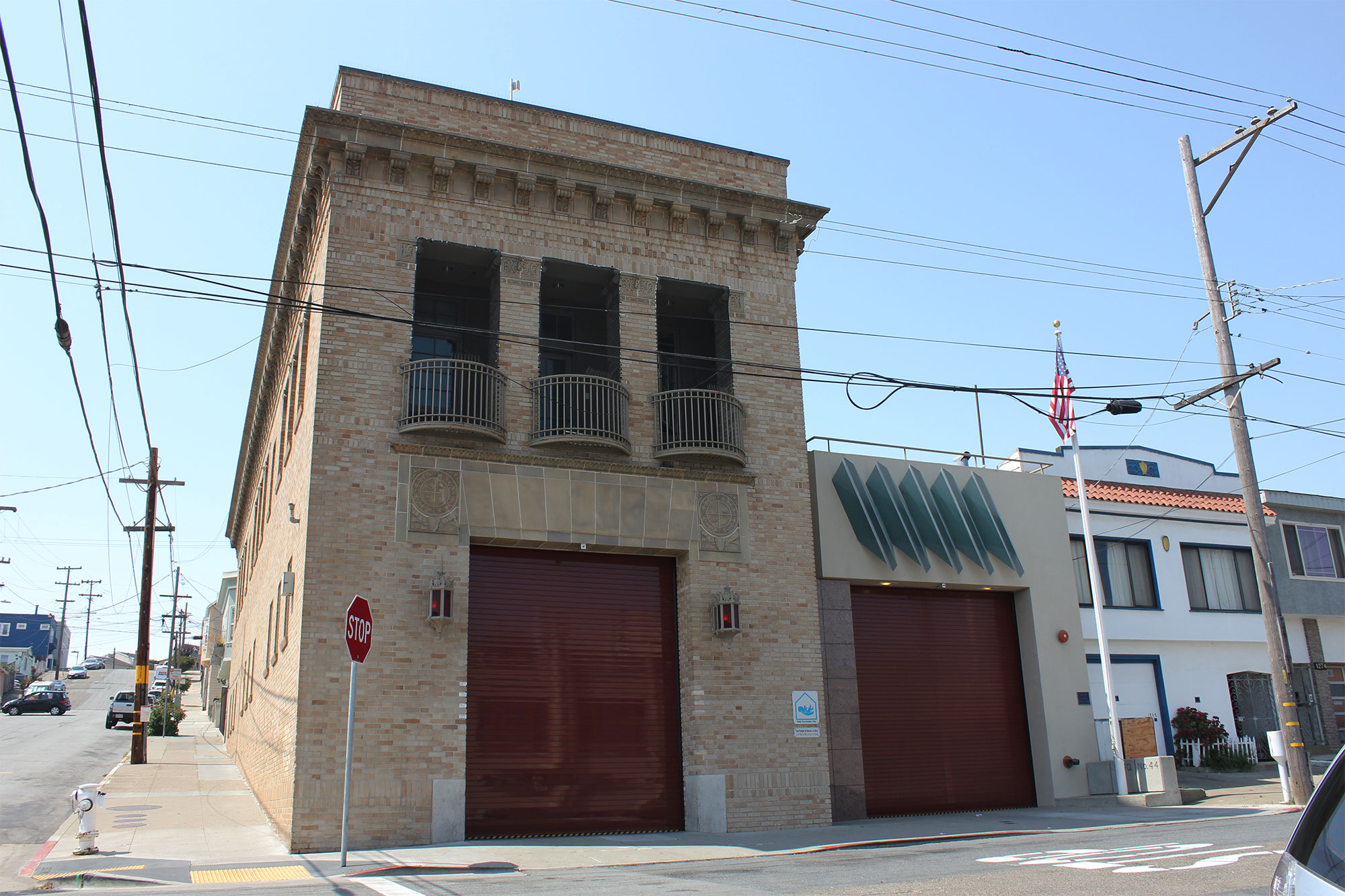 This is a great institutional building constructed in 1913. The fire department didn’t move in until 1915, waiting for the delivery of modern engine-driven apparatus (horses were finally on their way out). The integrity of Station 44 is very high. I love the brick façade, the cornice work, and the triple inset balconies evoking some Italian villa.

There are a few San Francisco fire station buildings of this era still around, but they are fairly rare. This is a great example of how the city values comparable buildings depending on the neighborhood they stand in. A similar fire station designed by the same architect at 100 Hoffman Street in well-off Noe Valley is considered a historic resource by the Planning Department, while the Girard Street building in Visitacion Valley is give the status “unknown.” 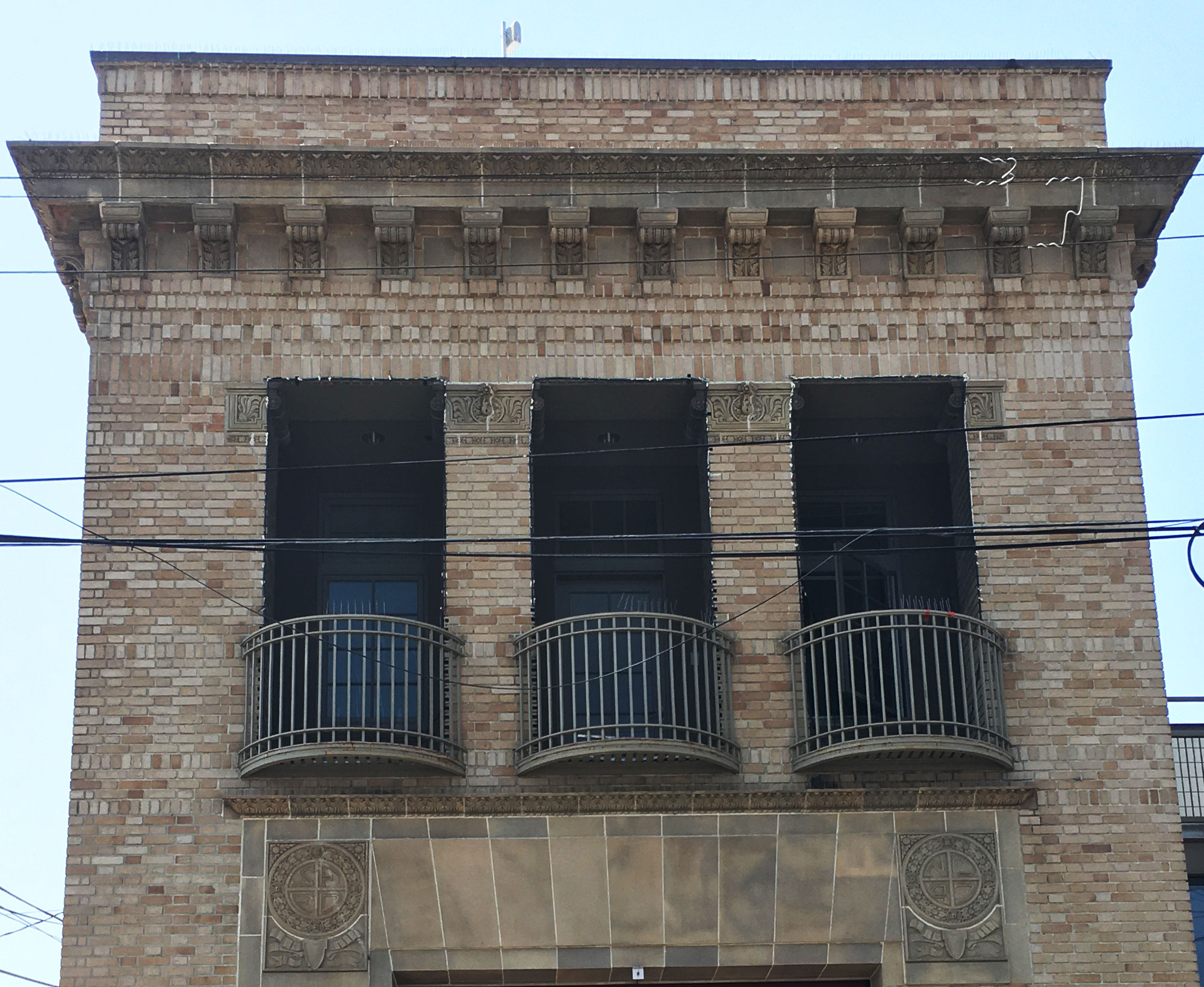 A city survey in 1976 was pretty lukewarm on this building. Industrial and utilitarian structures, no matter how elegant or thoughtfully designed, just weren’t seen as important. But Station 44 is now currently the oldest firehouse in active service and preservation and public interest have evolved. Attractive design and connection to the growth and development of the city are both there, and as a bonus, it’s still city property. Civic-owned buildings are always easier to designate. Department heads may grumble, worried about regulatory hurdles that could make maintenance work a chore, but they’re not going to mount some legal objection to landmark designation like a private owner could.

If Supervisor Walton wanted to initiate landmarking of this handsome structure, it would have an easy path to adoption. 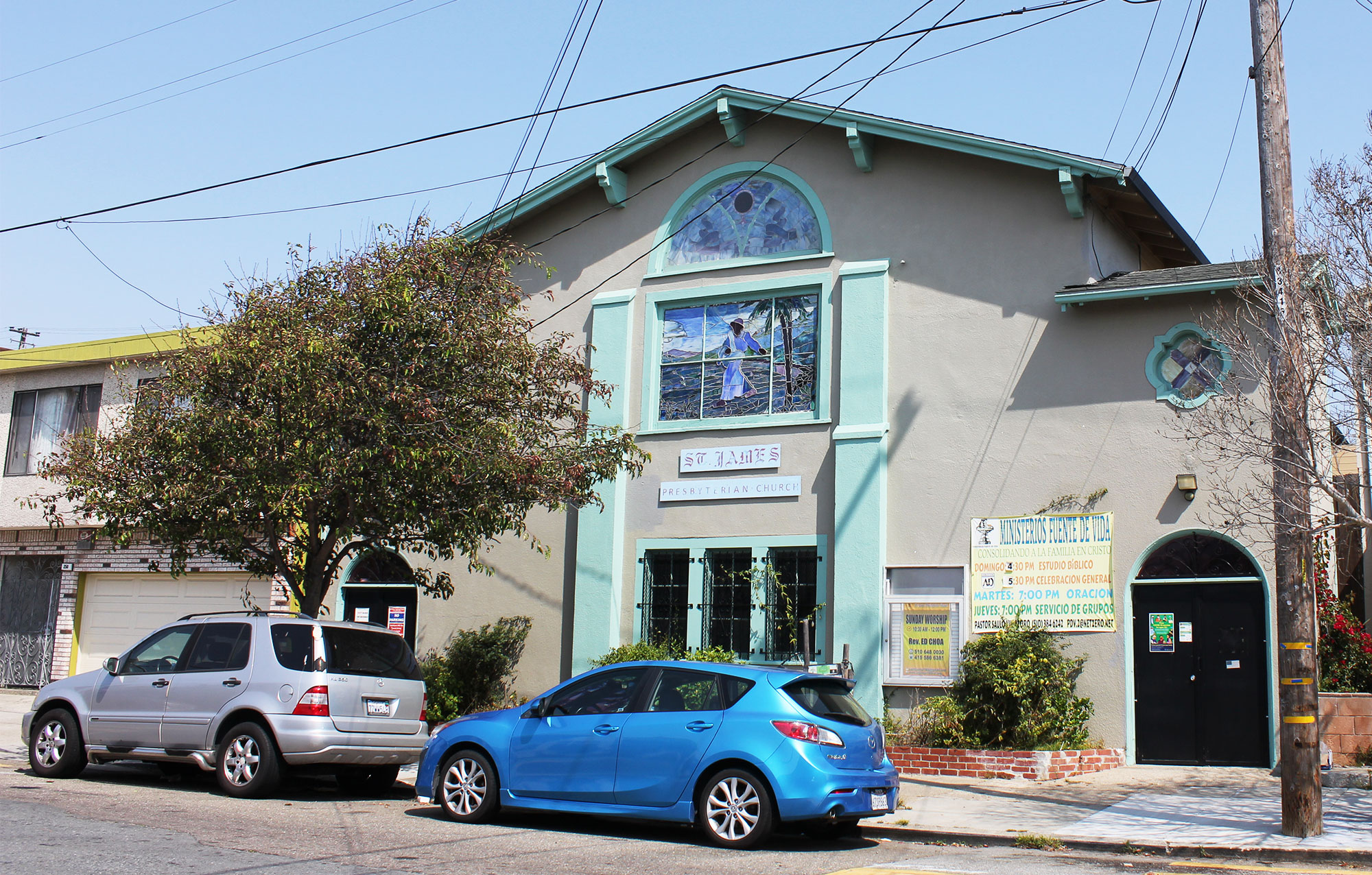 You want a name? There aren’t many more lauded around here than Julia Morgan, so just about anything associated with this legendary and trailblazing architect is landmark-worthy.

The St. James Presbyterian Church has its roots in the first few years of Visitacion Valley’s history as a city neighborhood. Beginning with a Sunday school in 1906, the congregation formed with 69 original members in 1908 and has been a part of the cultural and spiritual life of the valley ever since. The current church building, dedicated in 1923, isn’t too far from another Presbyterian church Morgan designed on Ocean Avenue about the same time (see this post from our 2020 Excelsior month for more).

Ironically, St. James’s most eye-catching feature wasn’t Morgan’s idea. The stained glass window of an individual apparently sowing a field (around palm trees?) was relocated from a church in the Sierra Nevada foothills sometime after the building’s construction…or so the story goes. 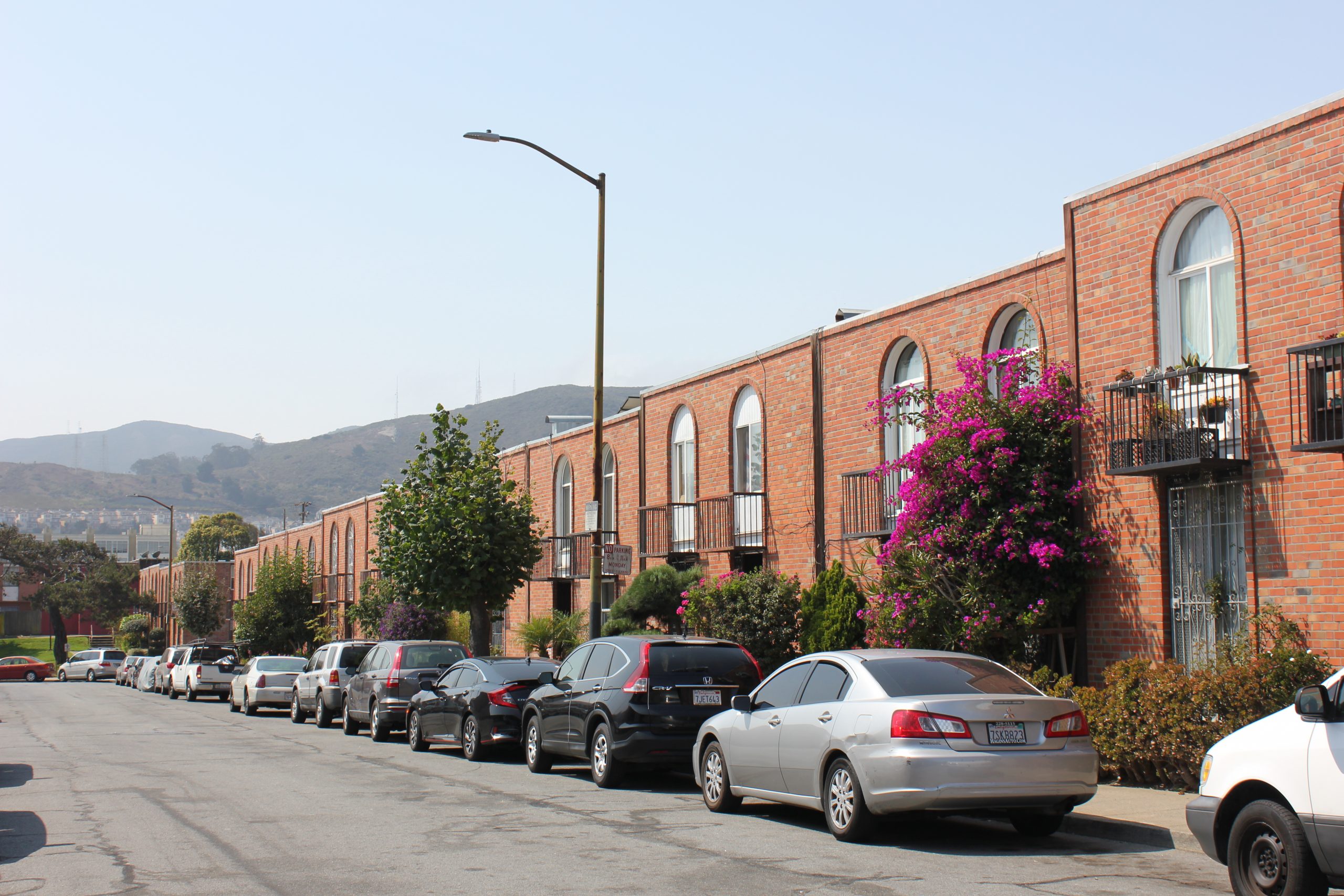 Modern architecture is in. Well, perhaps it’s best to say it’s in again. Planners, preservationists, and a younger generation have all jumped on mid-twentieth-century-style and one of the Bay Area’s most admired builders from that time is Joseph Eichler. Don’t believe me? When we want to mention Eichler on Instagram we have a half dozen fan accounts to tag.

We can’t talk about architectural significance in the valley without mentioning the townhouses of Geneva Terrace (not to be confused with Geneva Terraces a mile or more north). Built in 1965 and 1966, these two-story residences have an East Coast feel. All this brick, the arched windows, and open-air carports—are we in Pittsburgh? Albany? Poughkeepsie? 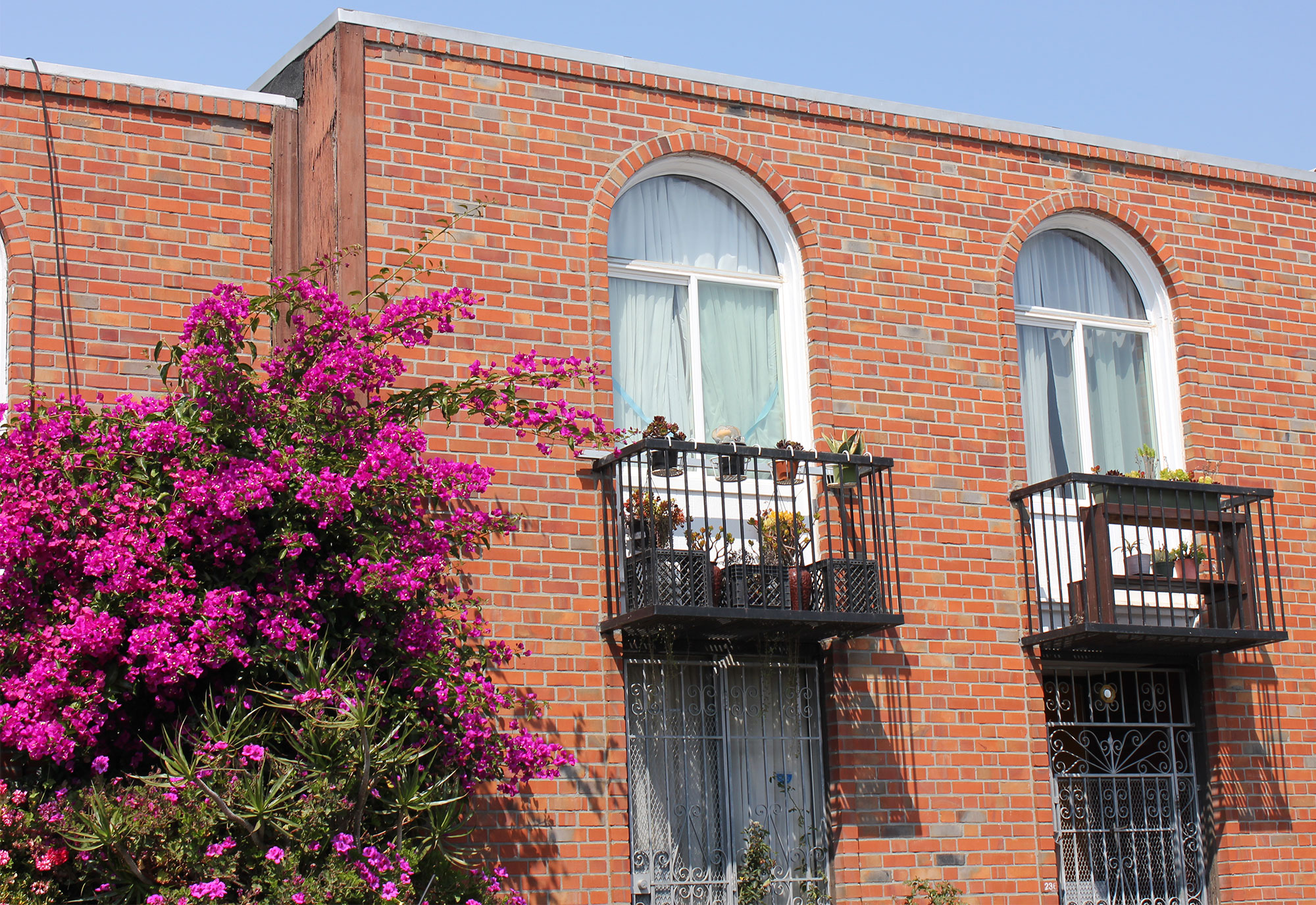 Owners have private rear patios and the whole development has open community space. Geneva Terrace was originally part of a fully realized landscape design, the townhouses matched by apartment towers. (We’ll go more into Eichler, his work in the valley, and the fate of those towers later this month.)

This isn’t one potential landmark, but rather a whole possible historic district for the neighborhood. Getting a district designated is much harder than an individual landmark, especially with so many individual owners to bring onboard. But Geneva Terrace’s style and design are special and Joseph Eichler’s name carries a lot of weight these days. Just ask @EichlerNetwork or @EichlerBayArea or… well, follow your own hashtags…