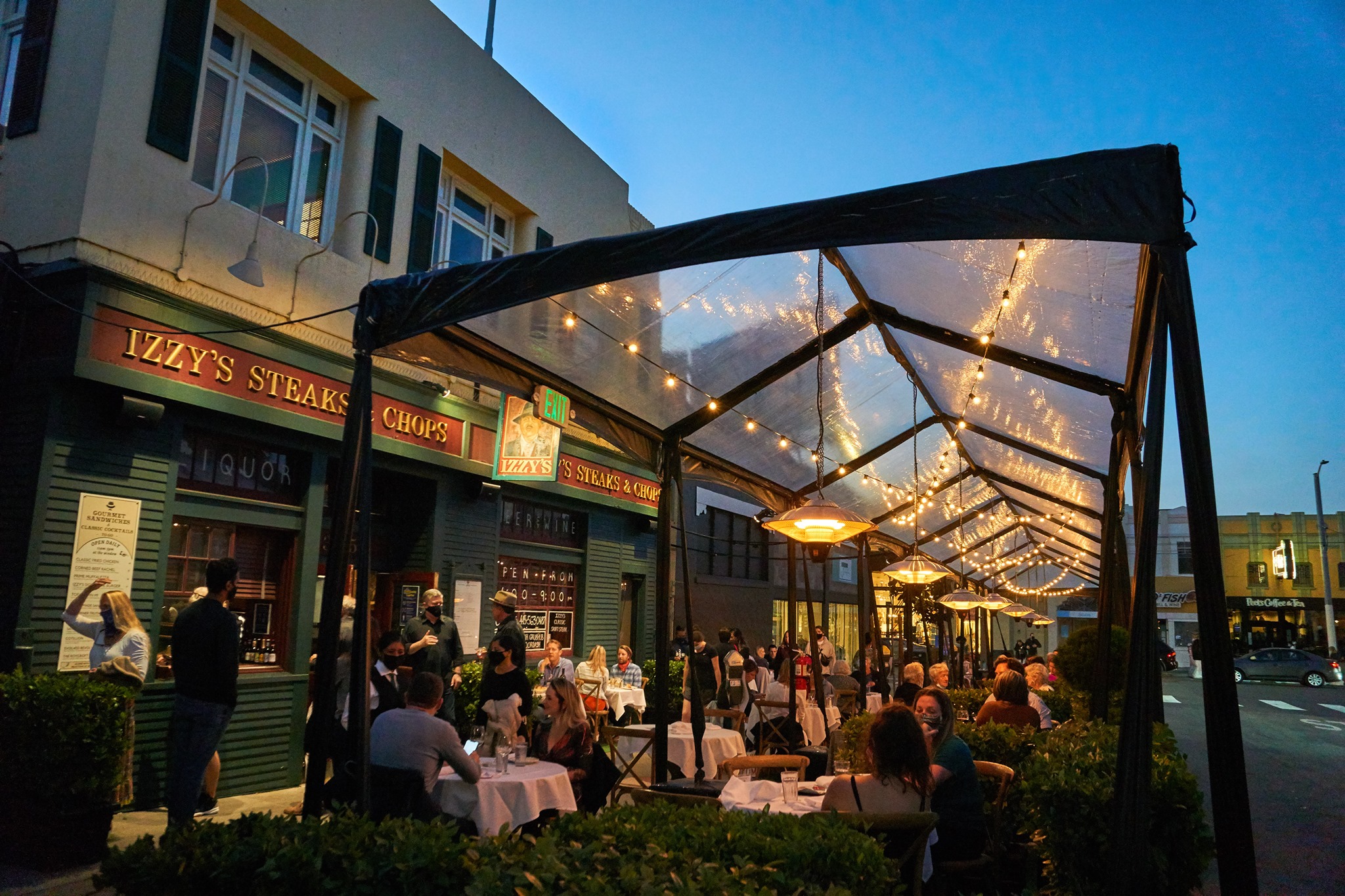 Since the 1980s, the Marina’s commercial corridors of Chestnut and Lombard Streets have shifted to meet the interests of its growing numbers of young, single people, and the district is now known for its fashionable restaurants and cocktail lounges. But many old-school legacy food spots live amidst the Marina’s trendier scene, two with origins in the 1920s and 30s.

Opened in 1987 by Robert Samuel “Sam” DuVall, Izzy’s Steaks and Chops has rightfully claimed its reputation among locals and tourists alike as the “watering hole” of the Marina. DuVall named this restaurant and bar Izzy’s after Isadore “Izzy” Gomez, a legendary chef and restauranteur in San Francisco’s raucous Barbary Coast. Gomez opened the Isadore Gomez Café and saloon in 1900 after arriving in the United States from Portugal at the age of 18 in 1826, and became well-known as one of San Francisco’s most colorful characters. As welcoming as Gomez was to his patrons, he was also a known violator of the city’s Volstead Act during the Prohibition era. Having read Gomez’s bright biography, DuVall was determined to one day open a great “Bohemian” steakhouse in honor of Gomez and, on what would have been Izzy’s 111th birthday, February 9, 1987, DuVall opened Izzy’s Steaks and Chops on Steiner Street. 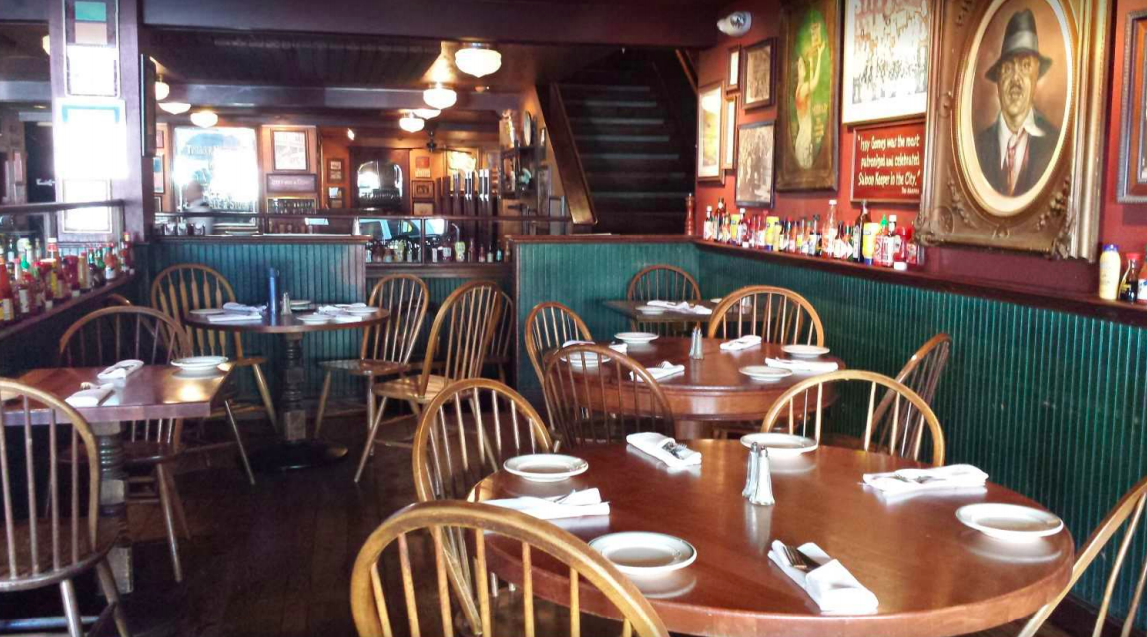 Inside Izzy’s atmospheric dining space. Almost all of the interior attributes are unchanged from the restaurants inception. A painting of Izzy Gomez is seen hanging on the wall (the same painting is found hanging outside of the restaurant). Photo courtesy of the Izzy’s Legacy Business Application.

Izzy’s proudly displays on its walls a quote from famous SF columnist Herb Caen, who proclaimed that “Izzy’s was a dump!”

The restaurant is decorated with classic memorabilia, vintage liquor bottles and original artwork, and maintains a dark, Bohemian atmosphere based on how Izzy’s original café and saloon would have been decorated. DuVall pioneered the ability for guests to customize their meal by selecting their own side dishes at no additional cost, a novelty that landed the restaurant on the pages of Gourmet, Food & Wine, Gentry, and SF Weekly. The recipes for a few of these famed side dishes, such as the creamed spinach and Izzy’s potatoes, haven’t changed in 30 years.

We’re loving serving you on our outdoor patio, but we know some of our longtime fans are missing these walls. Here are some more treasures from our collection. Over the past 30+ years, many Manhattans have been consumed under our patron saint Izzy Gomez’ approving eye!

When Izzy’s opened in 1987, there were four restaurants on the 3300 block of Steiner Street. Today, there are 11, not counting Izzy’s, evidence of the district’s rapid development over the last 30 years.

While the days of sipping a four dollar martini and downing a huge steak for under 30 dollars are long gone, Izzy’s remains affordable by steakhouse standards and continues its life during the pandemic as a neighborhood watering hole. They are open for full service dining nightly from 4:00 PM-9:00 PM. Reservations are highly recommended for dine-in: https://bit.ly/32FW8M7. They are also open for pickup and delivery during lunch (sandwiches) and dinner (full menu). 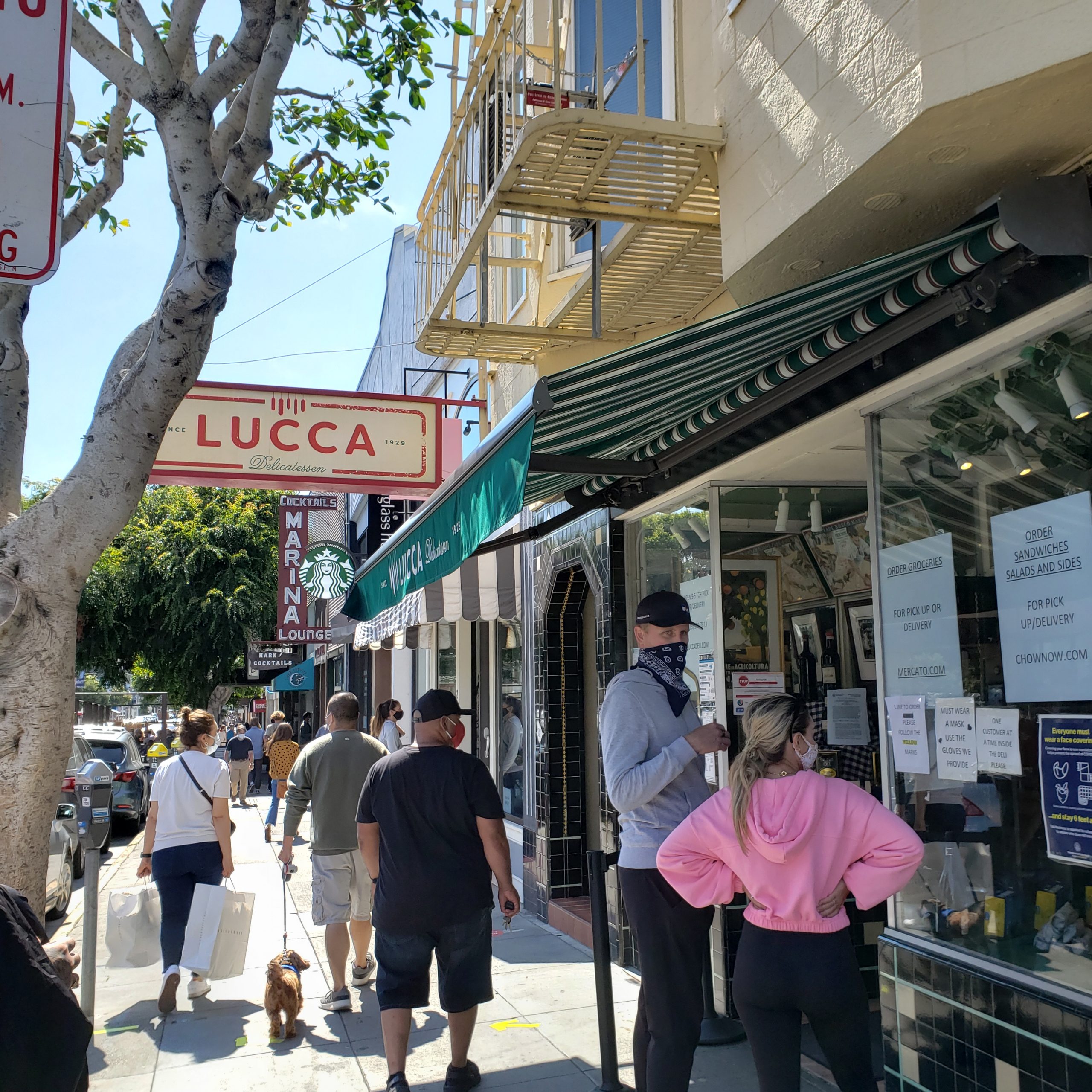 “Three generations, one LOCATION! Since 1929” is what Lucca Delicatessen proclaims from its website and, true to their word, this family-owned deli continues serving up homemade Northern Italian food from its original storefront on Chestnut Street in the Marina District.

Michele (Mike) Bosco, along with his partners, Chef Maggiore Colona and Italo Cencini, opened Lucca in 1929. Bosco was born and raised in Glenwood Springs, Colorado, and grew up working on the Denver & Rio Grande Railroad and at the Star Hotel in Glenwood. Like many other Italians in the years before the Great Depression, he decided to move to San Francisco to start a business and raise his family.

The Marina was the site of the 1915 Panama Pacific International Exposition (PPIE) and after the fair private developers slowly turned the area into a residential neighborhood. As the Marina District became more populated in the 1920s, landlords realized that by converting the spaces under their upper-story residential units to retail they could generate more income. This is how Lucca Delicatessen was born – it was originally a parking garage beneath a 6-unit apartment building. By starting Lucca’s, Bosco and his partners helped feed an emerging Italian community that lived and worked nearby.

The completion of the Golden Gate Bridge in 1937 only helped grow nearby Chestnut Street’s business district, and Bosco and his partners showcased Lucca (by this time almost ten years old) and its “Italian Sausages and Ravioli” in the Golden Gate Fiesta program.

In 1959 Mike Bosco became the sole owner of Lucca’s, and managed the deli with his son Ed until 1968. Ed ran Lucca’s continuously with great success for 40 years. Today, Ed’s children Linda and Paul Bosco run Lucca’s as a brother and sister team, and continue to share Lucca’s wonderful tradition and legacy. 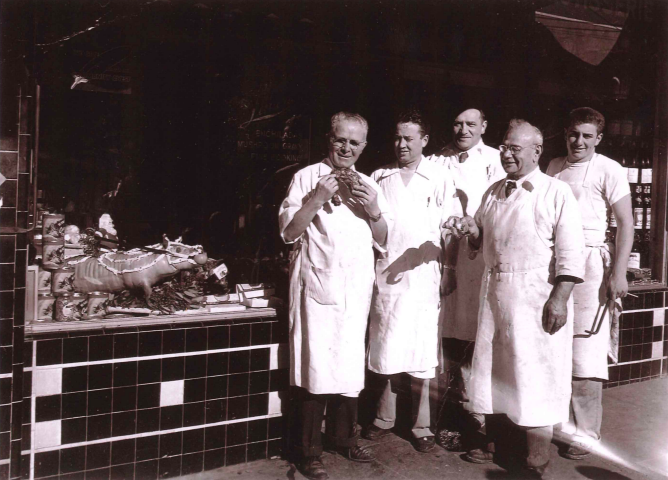 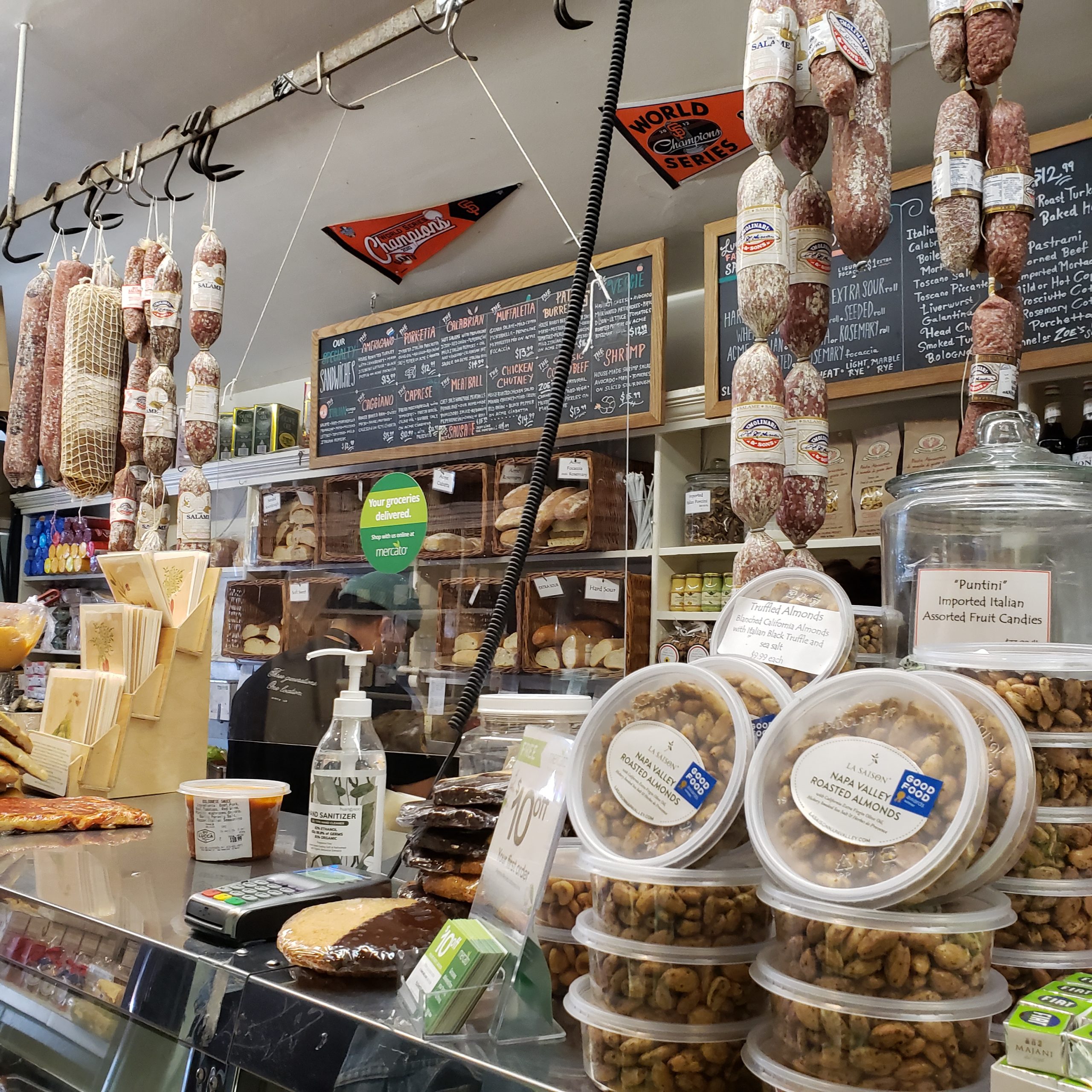 Lucca’s has certain recipes such as ravioli, Bolognese sauce, Pomodoro sauce, minestrone soup, frittata and potato salad that have been handed down from Mike Bosco’s era with the commitment of keeping them the same. Their ravioli is is a contender for the best in San Francisco, and is made from an original machine from the 1930s. The recipe and process has not changed since the business was founded.

The business also retains its original 1930s tiles and display windows. The black tiles of the storefront’s bulkhead are part of the building’s façade from the 1920s era. This includes the apartment door entryway and alley door area. All the shelving inside the store is original, including the cheese rack at the rear of the store and the rack that holds salami over the counter.

Lucca’s Legacy Business Application sets the scene for what customers experience at Lucca’s:

Going to Lucca’s is an experience. It has an old-world charm that is unique to the Marina. Folks first see the Lucca sign on the window and the traditional green, red and white striped awning similar to those that hang from many Italian food establishments. Then they see the front windows with all of the different products for sale – pastas, wines, olive oil, vinegars, cookies, torrone, panforte and more. The next thing that brings them in is the smell of the salami hanging on the rack and the prosciutto being sliced on the slicer. Once customers are inside, everywhere they look there is something good to buy – cold cuts, cheeses, olives, bread, roasted chickens, and prepared to go items. It reminds one of taking a mini vacation to Italy. All sorts of smells can be emanating from the kitchen into the front depending on what the chef is up to. It’s an old-school, take-a-number-to-get-helped sort of place. On the weekends, things can get a little noisy as there could be up to 10 customers waiting to be served.

Lucca Delicatessen remains open throughout the COVID-19 crisis, and you can order their sandwiches and entrees for take-out and delivery on their website. 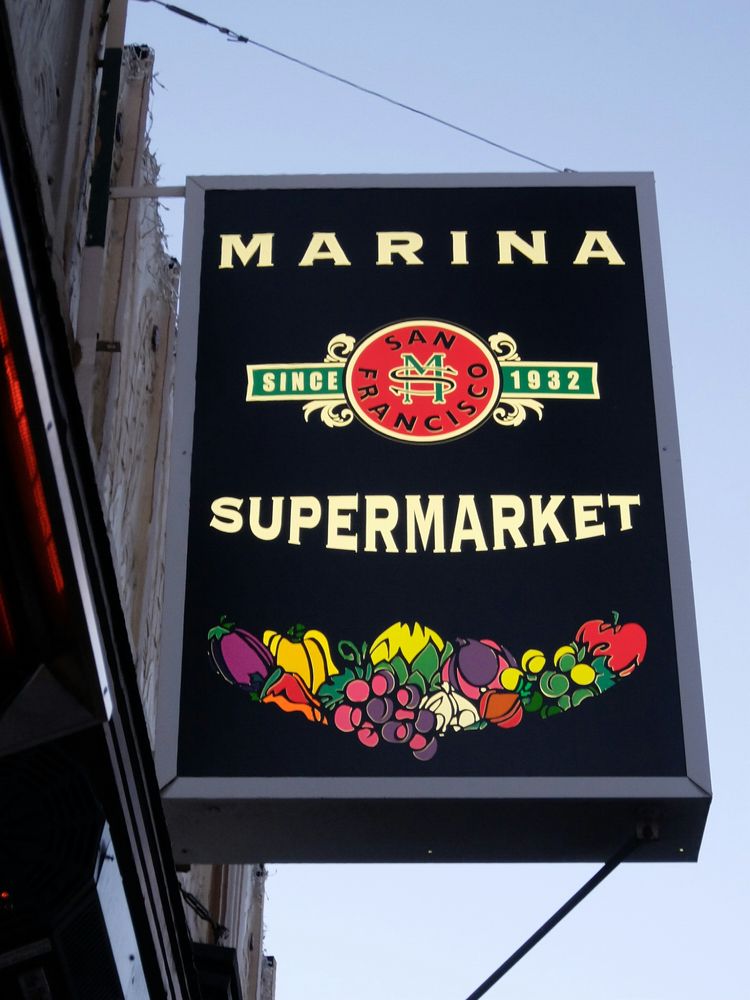 Located on the southwest corner of Chestnut and Scott streets, Marina Supermarket, Inc. (“Marina Super”) is the last remaining local neighborhood grocery store in the Marina. While shoppers looking for a more extensive selection can always head over to the Marina Safeway, Marina Super serves the district with specialty products, locally-made products, and its own line of groceries and fresh meals prepared daily. The store also offers phone orders and local delivery services. According to their Legacy Business Registry application, Marina Super has had home delivery service since it opened, initially designating a delivery boy who brought groceries to houses of customers who were unable to bring the groceries home themselves. As time passed, Marina Super initiated a formal delivery service and took phone orders to have groceries delivered directly to customers.

Like Lucca Delicatessen, the market has its origins in a time when the Marina was quickly developed into a residential neighborhood after the end of the PPIE. The business believes the year to be 192, but their signage indicates that it was established in 1932, a year after their current building was constructed. Little is known about the former owners of Marina Super prior to 1963, though the current owner Kenneth Puccini knows that a man named Clarence owned the supermarket for some time, followed by a family named Werner.

John Plessas took over ownership of Marina Supermarket in 1963. Affectionately called the “Mayor of Chestnut Street,” John Plessas lived and worked in the Marina district for 85 years. He was born on June 13, 1926, as a first generation Greek-American. When John returned to San Francisco after serving in the US Navy during World War II, he began his career in the grocery business, first at Marina Super before eventually opening his own store on Fillmore and Eddy with business partner Nick Colichidas. When he returned to Marina Super, John worked as the store’s owner for over 20 years. 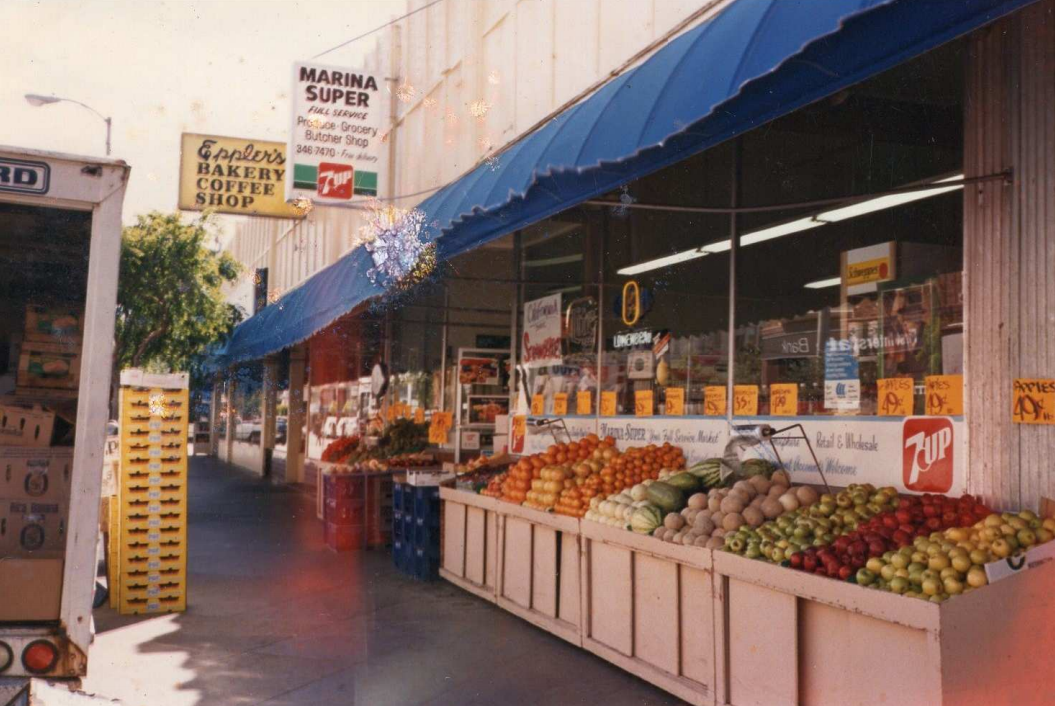 When John sold the supermarket to his four employees in 1985, there were six other grocery stores in the Marina district not including Marina Safeway. Over the years these stores closed their doors, and today Marina Supermarket remains the only independent grocery store in the district. Kenneth Puccini was one of the four employees to take over the business from John, and today remains the sole owner. Puccini and his family have been connected to Marina Super since the early 1930s, when his grandfather opened Puccini Meats butcher shop within the store. In 2007, Puccini Meats was relocated down the block to 2395 Chestnut Street and renamed Marina Meats. 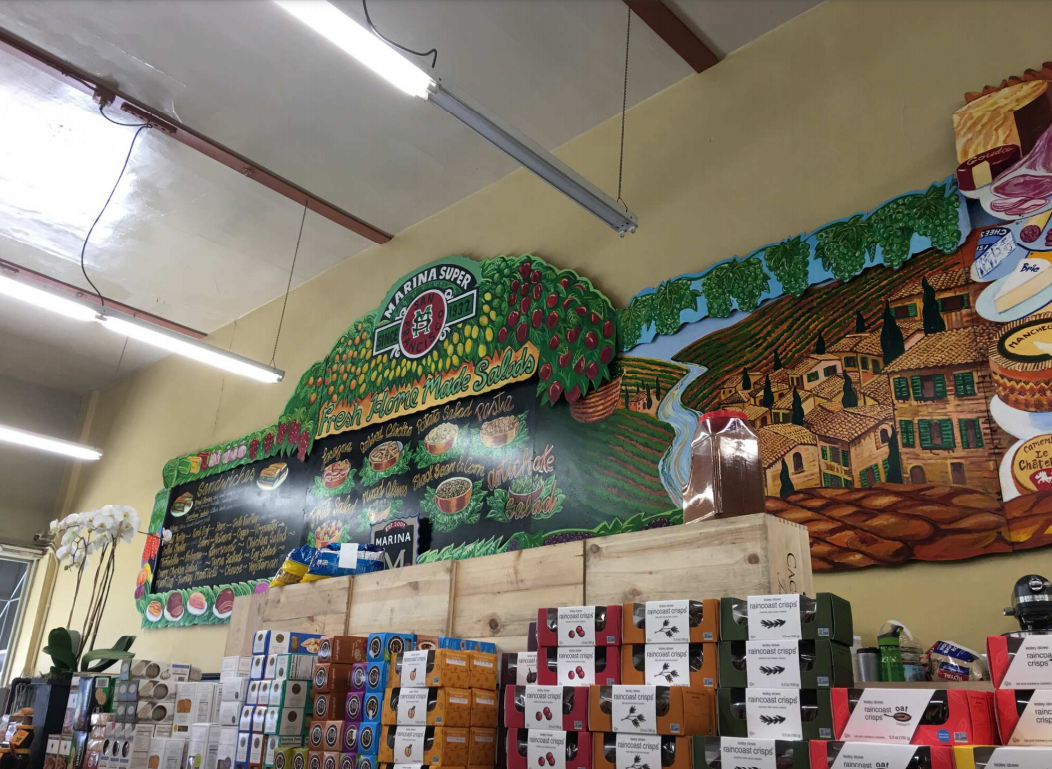 A board inside Marina Super advertising freshly-made salads and sandwiches.

The building at 2301-2323 Chestnut Street housing Marina Supermarket is a one-story Art Deco building. While there are a plethora of ornate Deco buildings along Chestnut, interestingly a 1976 Department of City Planning Architectural Survey noted that Marina Super’s building was “one of few (commercial buildings) on Chestnut that hasn’t been totally bastardized.”

Marina Super joined the Legacy Business Registry in September 2018. “I am honored for Marina Supermarket to be included on the Legacy Business Registry,” said Puccini of the recognition. “We all started as employees and bought the business from John Plessas when he retired. We’ve been serving the Marina District for over thirty years and we plan on being there for thirty more.”

During the pandemic, the market remains open with safety protocols (masks and social distancing).