“Despite its country-club appearance and location […] the Marina Library is designed to supply two things in abundance—books and light.” — San Francisco Chronicle, August 9, 1954.1

Between 1925 and 1930, as single-family homes, flats, and apartment buildings filled the former site of the 1915 Panama-Pacific International Exposition, the housing capacity of the Marina District went from almost nothing to more than 25,000.2

The closest public library for these new residents was the Golden Gate Valley branch at Green and Octavia Streets, built in 1917. The Carnegie-funded Beaux-Arts-style building was imposing and formal. Architect Ernest Coxhead had modeled it on a roman basilica and it exuded classical grandeur inside and out. But its size was not adequate to handle a doubling of patrons.

After World War II ended, the city embarked on a broad expansion of its public library system and promised Marina residents they would benefit. A large billboard went up on the northeast corner of Fillmore and Chestnut Streets alongside Marina Middle School reading “Proposed site of the Marina Branch of the Public Library. Construction is to start in 1951.”3

But 1951 came and went without a shovelful of dirt turned. The library commission paid the architectural firm of Kent & Hass to draw preliminary plans for a branch, but apparently found them unsatisfactory. The art commission convinced library leadership that the chosen corner lot chosen was inadequate for landscaping design. Meanwhile, the Parkside Branch library opened with ecstatic reviews for its modern design by architects Appleton & Wolfard.4

On April 2, 1952, the library commission approved plans by Appleton & Wolfard for the Marina Branch library on a new site east on Chestnut Street in Funston Square (now known as Moscone Square). This required a land swap with the Recreation and Park Department and the relocation of a children’s playground, but like the successful Parkside branch, the $158,000 Marina library would maximize the synergy of a park setting.5

Ground-breaking ceremonies, complete with gold shovel, took place on October 25, 1953. Sam M. Markowitz, president of the library commission promised “[t]his lasting structure will be enthroned on imperishable books for the improvement of mankind.”6

Like Parkside, the Marina branch featured a fireplace, an open floor plan to browse some 15,000 books on blond wood shelves (in meeting the demographics of the neighborhood, the Marina branch opened with more than 100 books in Italian), and comfortable lounge chair seating. An extra $1,950 had to be appropriated to finish furnishing the branch to Appleton & Wolfard’s relaxed and homey vision. 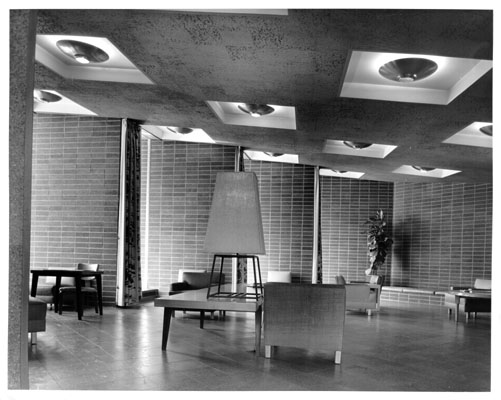 The 6,500-square-foot plan had rubber tile flooring and a laminated beamed ceiling above, red brick walls, and an outdoor courtyard. Under an attached trellis, the Chronicle noted, “mothers will be able to sit and read while keeping an eye on their children in the adjoining playground.” Situated on flat ground with floor-to-ceiling windows framing the park and the view beyond to the north, it was the most light-filled branch of the system.7

In 2007, the Marina branch library underwent a sensitive renovation led by the architectural firms of Tom Eliot and Field Paoli, which included a new glass-enclosed reading area in keeping with Appleton & Wolfard’s design and materiality.

Recognized as a reflection of principles of the modern public library promoted by the American Library Association after World War II, and as an innovative example of mid-century modern design in Northern California, the Marina Branch Library was designated as City Landmark #262 in 2010.

2. Christopher VerPlanck, “After the Fair was Over: Marina District Development Takes Off,” Heritage News, Fall 2007, pg. 6.