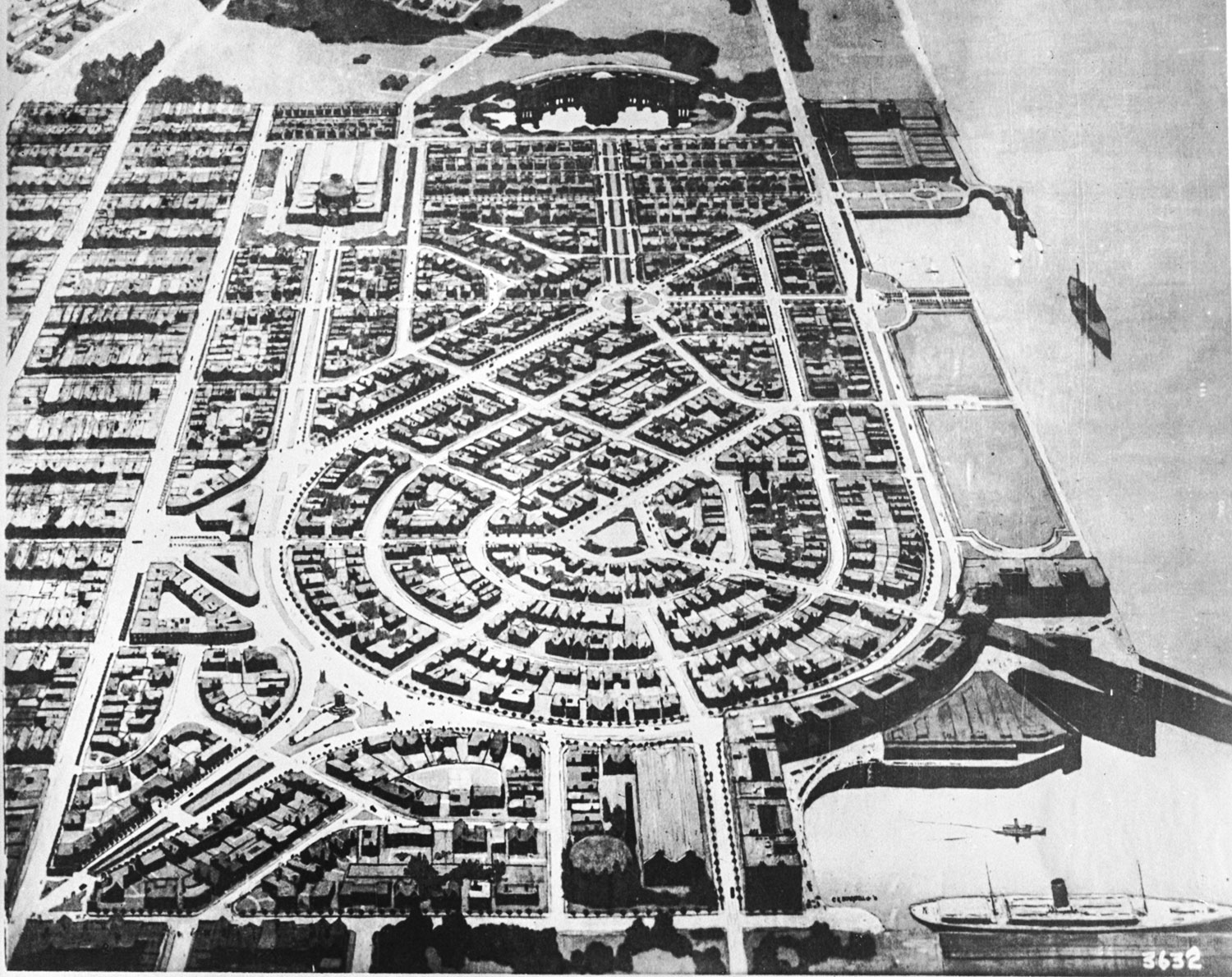 Mark Daniels’ first residence park design for “Presidio Gardens” in the future Marina District, with the PPIE’s Palace of Fine Arts at top, California Building upper right, Horticulture Palace upper left, and Column of Progress center. Only the Palace of Fine Arts was retained and Daniels’ plan was never executed.

The following is excerpted and adapted from the forthcoming book “Garden Neighborhoods of San Francisco, The Development of Residence Parks 1905-1924.” Residence Parks were exclusive master-planned communities incorporating restrictive construction, design, and occupancy covenants as well as landscaping features such as ornamental columns, stairways, and entry gates. Examples in San Francisco include Forest Hill (designed by Daniels), Presidio Terrace, and St. Francis Wood.

After the Panama-Pacific International Exposition closed in December 1915, many proposals were made for the use of the 330-acre site. Landscape architect Mark Daniels recounted past plans and wrote his own in 1917:

“For the past ten years…San Francisco has been arguing…first to make this site, formerly known as Harbor View, into a manufacturing district, next into a home for wandering warehouses, then into massive shipyards, a wholesale district, freight-yards, and, in fact, almost every possible purpose except that to which geographical condition and the trend of city development point, namely a beautiful residence park. […] The hills and slopes in the northern district command a view of the Bay, the Golden Gate, and the Pacific Ocean, that can be surpassed in few cities in the world.”1

Mark Daniels designed two versions of a residence park. His first plan (depicted at top of page) was a Beaux Arts extravagance with a large semicircular street pattern and diagonal streets. The diagonals converged on three features [planned for preservation] from the exposition: the Column of Progress, California Building, and Palace of Fine Arts. Daniels called this plan “Presidio Gardens.”3

Daniels’ design expressed a tenet of the City Beautiful Movement by providing a processional route leading to major landmarks or vistas. City Beautiful planning was fused with classical and Baroque architecture and the movement of individuals through the space, with buildings and monuments sited so as to become the terminal vistas of long, converging, diagonal axes. Daniels explained how the axial streets took advantage of the surviving monuments from the fair and made them the focus of attention:

“The main north and south axis of the plan is approximately in the center of the property and is terminated to the north by the Column of Progress, one of the monuments left as a heritage of the Exposition. The two main diagonals also lie on axis with the Column of Progress. […] The axis of the main east and west thoroughfare through the property centers on the dome of the Palace of Fine Arts, that wonderful conception of Bernard H. Maybeck, which the people of San Francisco have wisely determined to preserve to posterity. The eastern end of this axis terminates in a plaza formed by its junction with the circle drive.” 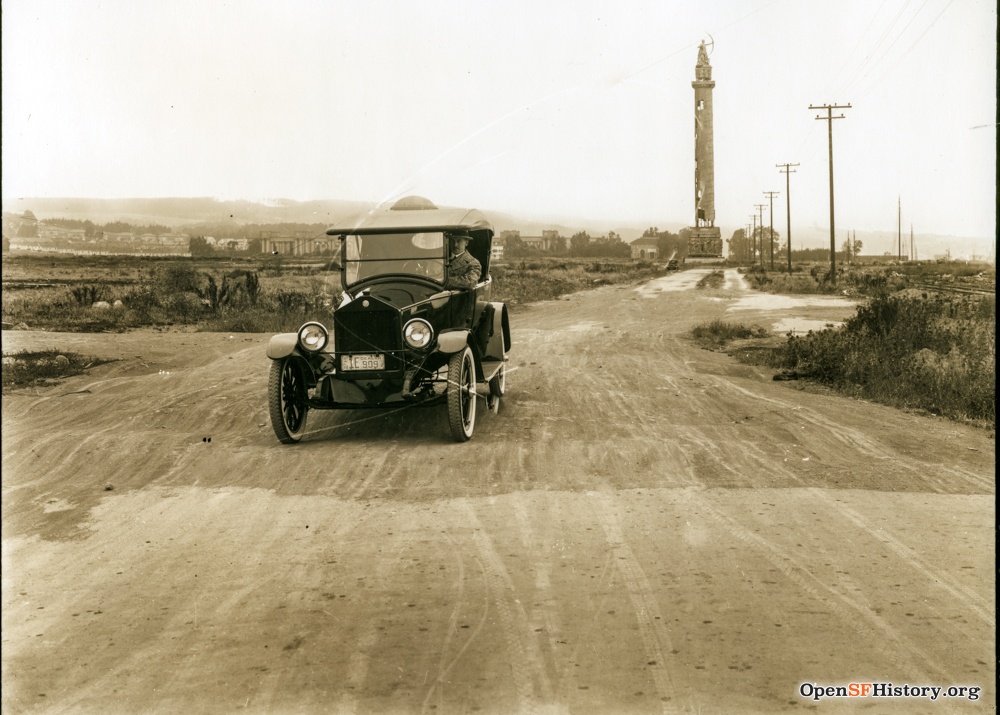 Automobile at future Marina Boulevard and Fillmore Street, just before development on the Marina District would begin in 1922. In the background is the decaying Column of Progress from the PPIE at Scott Street. (OpenSFHistory/wnp4.1548)

Daniels believed that his plan for diagonal streets in Presidio Gardens also solved the problem of winds blowing off the bay:

“The diagonals gave an excellent opportunity for disrupting and changing the directions of the streets, thus making it possible to avoid the long streets of continuous direction which seem to invite those winds which so annoy the stranger, while they become the joy of the resident of the city. […] The prevailing winds of the district are from the water, or from the west and north. It has been demonstrated in such modern residence parks as Forest Hill that the winds in San Francisco lose their violence in the streets where the directions of the latter are changed frequently. For this reason, the plan does not incorporate any straight street of considerable length, except where a vista upon some inspiring feature is desired.”4

Presidio Gardens would have the usual residence park restrictions. Daniels wrote: “It is the intention of the owners to establish building restrictions along most modern lines, not only to assure the general character of the neighborhood, but to preserve a unity of architecture. All utilities, such as light and power lines, will be placed underground and installed before paving is commenced. Buildings will be grouped and restricted as to location so as to provide a maximum of sun, view, and air.”5 Presidio Gardens residence park would have 750 lots with only six houses per acre, plenty of lawn, and space for children to play. Local newspapers announced the plan for Presidio Gardens with great fanfare and it was even covered in Los Angeles newspapers.6

Olivier Charles Stine, head of a real estate firm, was in charge of the project, and he had to secure the approval of the many property owners. Although organizers claimed to have secured the approval of nearly all the Presidio Gardens property owners, the plan was rejected.7 Daniels was scathing in his comments:

“Plan No. 1 seemed to be the most desirable, but it was found impossible of execution as there were certain owners of property in the district who refused to abandon the idea of the district eventually being used for other purposes than a residential locality. […] The property is now subdivided into rectangular blocks with unnecessarily wide streets, and to convince all owners that a change of streets was advisable was, alone, a Herculean task. In some instances, it became necessary to change the plan so as to leave portions of the old streets, if for no other reason than to leave ingress to the stable of the mule whose stubbornness made a change impossible.”8 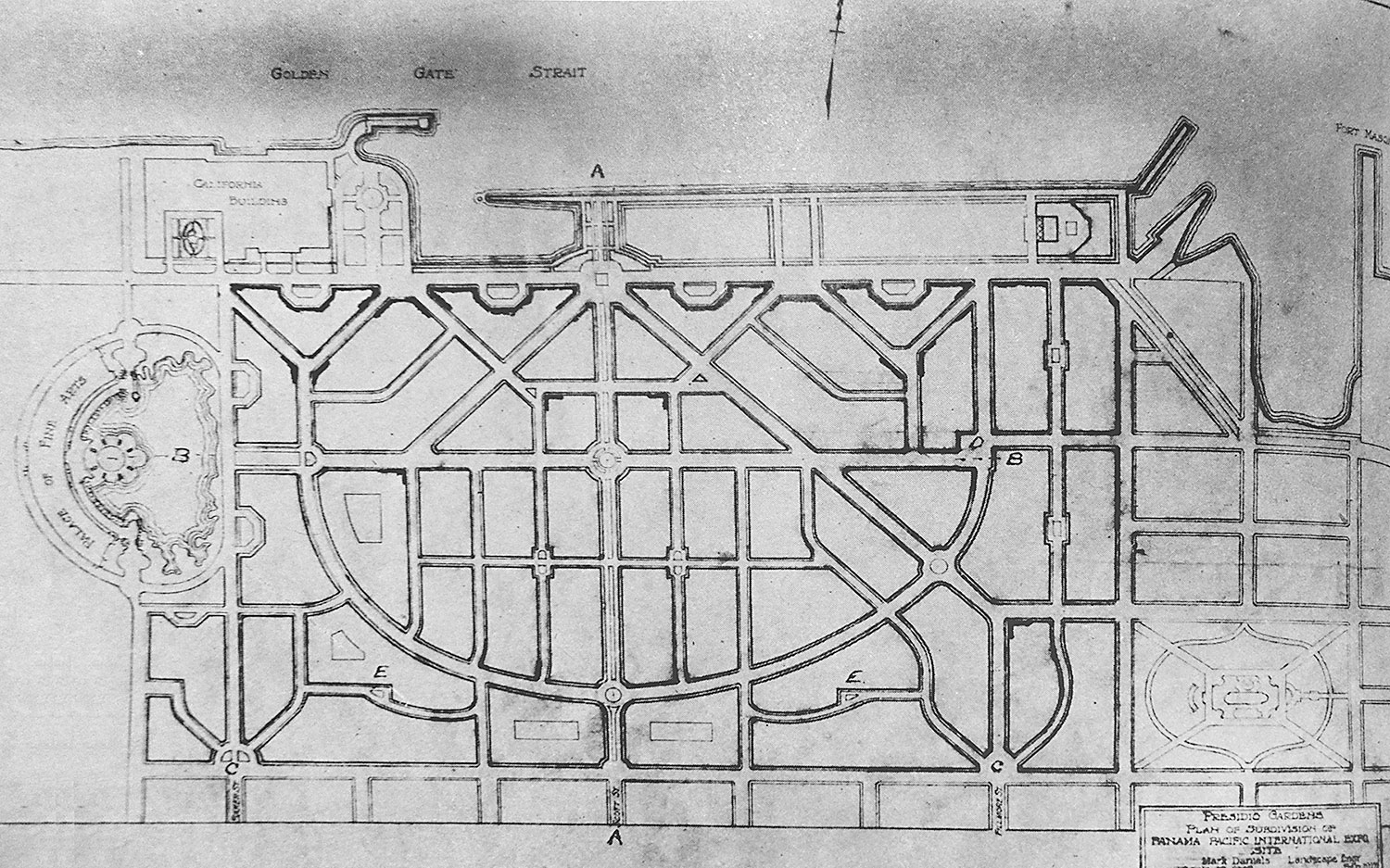 This revised plan for Presidio Gardens retained more rectangular blocks and presumably was more amenable to the property owners who had balked at the first design. It still called for a monumental approach to the Palace of Fine Arts and a sweeping curved boulevard with streets located so that the Column of Progress and the California Building would be centers of attention.

The adopted plan was renamed Marina Gardens, and it used only half of Daniels’ design. A subdivision for the map of Marina Gardens, dated April 1917, was recorded on September 13, 1918, and streets were dedicated in November 1918. This subdivision covered the eastern half of the tract, from Scott Street to Fillmore Street. This was supposedly the first phase and would be followed by the rest of the exposition site, from Scott Street to the Presidio, after [World War I] ended.9 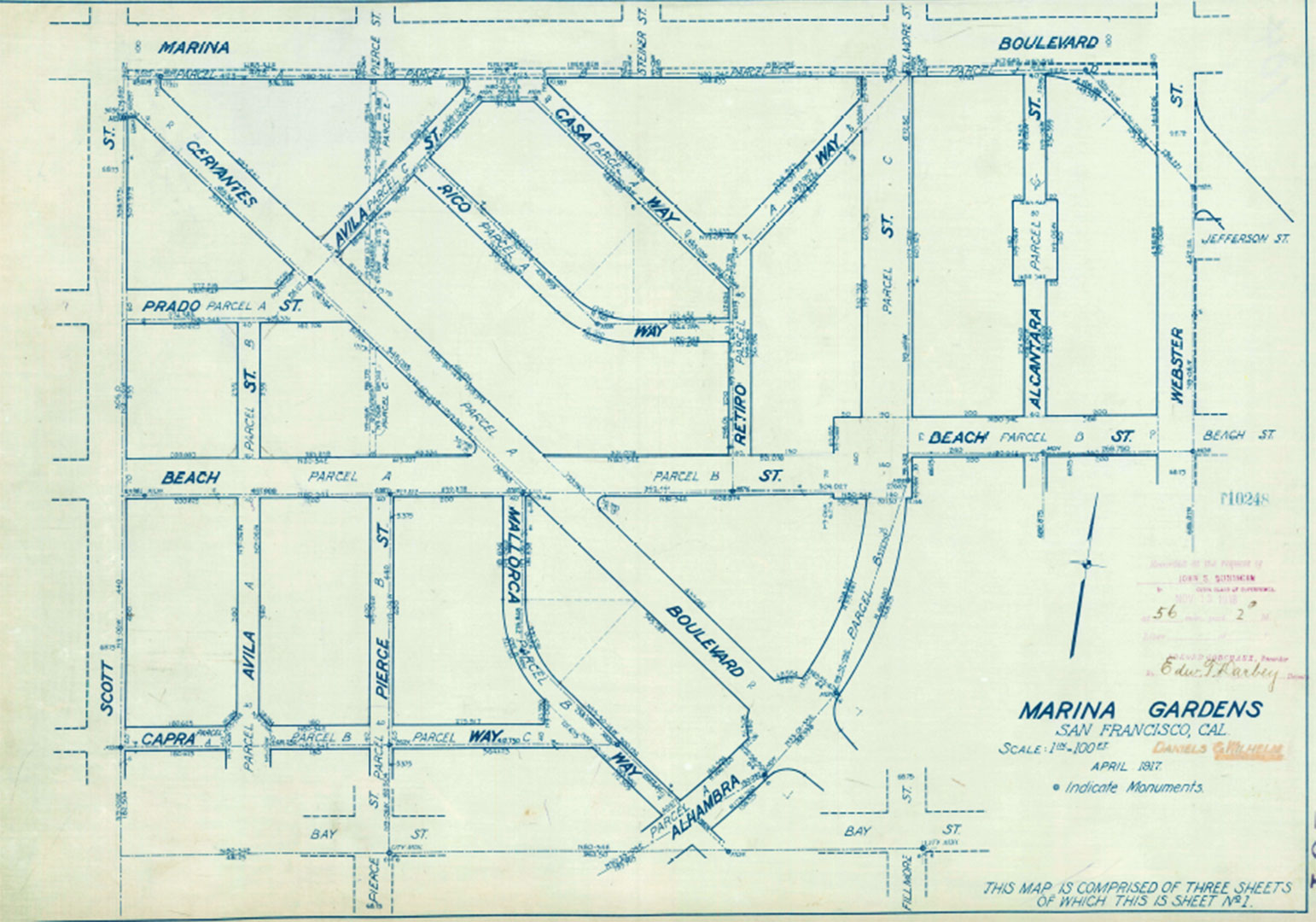 However, the second phase of the project was never created. Stine, the real estate developer heading up the project, died in January 1918, and Daniels was in France with the Army Corps of Engineers. Although part of Daniels’ street design was maintained, the other elements of a residence park were not. In March 1924, the entire Marina was zoned Second Residential, meaning that apartment buildings were allowed. Evidently, this change was made at the behest of the Marina Corporation, which had purchased the land and planned to subdivide it.

The Marina Corporation was formed by George E. Belvel and the Rothschild Brothers, with J. B. Rothschild as president. They sold parcels to many builders, including the Meyers Brothers, Joseph Arnott & Son, F. W. Varney, and Lang Realty.10 Lots were resold and further subdivided by subsequent owners resulting in a dense mix of apartment buildings, flats, and houses. Instead of widely separated houses on wide lots as called for by Daniels, developers put up small contiguous houses on narrow lots with four-story apartment buildings on the street corners. 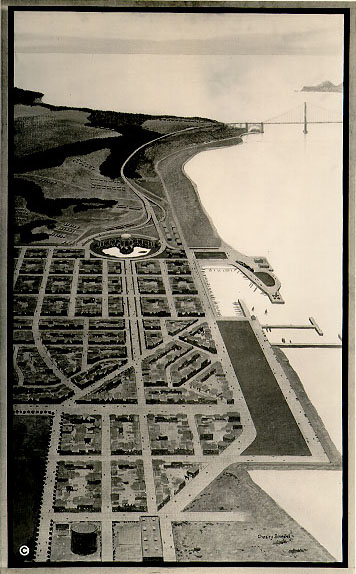 Unfortunately, the terminal vista of long axes at the Palace of Fine Arts as envisioned by Daniels in 1916 and Bonestell in 1934 was abandoned. Bonestell’s route would have required removing houses along Beach and Francisco Streets that were less than ten years old. A less intrusive route was chosen by widening Lombard Street and cutting a new diagonal street, Richardson Avenue, through the southwest corner of the Marina neighborhood.

Generations of San Franciscans made considerable efforts to save and restore the Palace of Fine Arts, yet it is almost hidden away by an unimaginative grid of narrow streets. Not what one would expect for such a monumental structure.

1. Mark Daniels, “A Residence Park on the Site of the Panama-Pacific Exposition,” The Journal of the American Institute of Architects, V:4, April 1917.