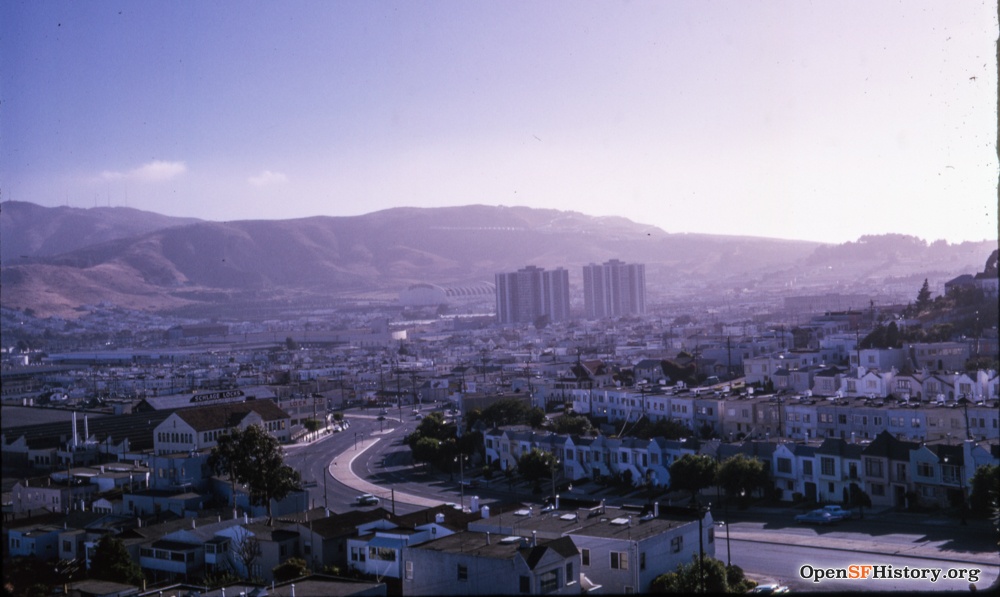 View across Visitacion Valley with Geneva Towers in the center, 1970s. (OpenSFHistory/wnp25.2434)

If you were a resident of Visitacion Valley in the late 1980s or early 1990s, your neighborhood wouldn’t make the newspaper or the nightly news often, and when it did, it usually wasn’t good. You would hear terms like “troubled” and “notorious” and frequently the subject was Geneva Towers.

I mentioned in a post last week that as a kid I associated the neighborhood with the Schlage Lock factory beside the freeway, but the more visible landmark were two apartment towers rising twenty stories from the center of the valley, visible anywhere from John McLaren Park to San Bruno Mountain to the bay. Modern in design, from a distance they evoked Southern California high living. One could imagine beach towels hanging off the balconies and perhaps a pool between the towers with glamorous folks lounging and sunbathing.

That was originally what builder Joseph Eichler was going for in the early 1960s when he planned his five-acre low-rise/high-rise development on the block between Sunnydale, Schwerin, Velasco and Sawyer streets, the former site of the Sunnydale Nursery greenhouses. His Geneva Terrace brick townhouses would sell to “successful urbanites” at close to $30,000 a residence while two slick apartment buildings, Geneva Towers East and West, would fill with rent-paying clerks and maybe even doctors and lawyers. 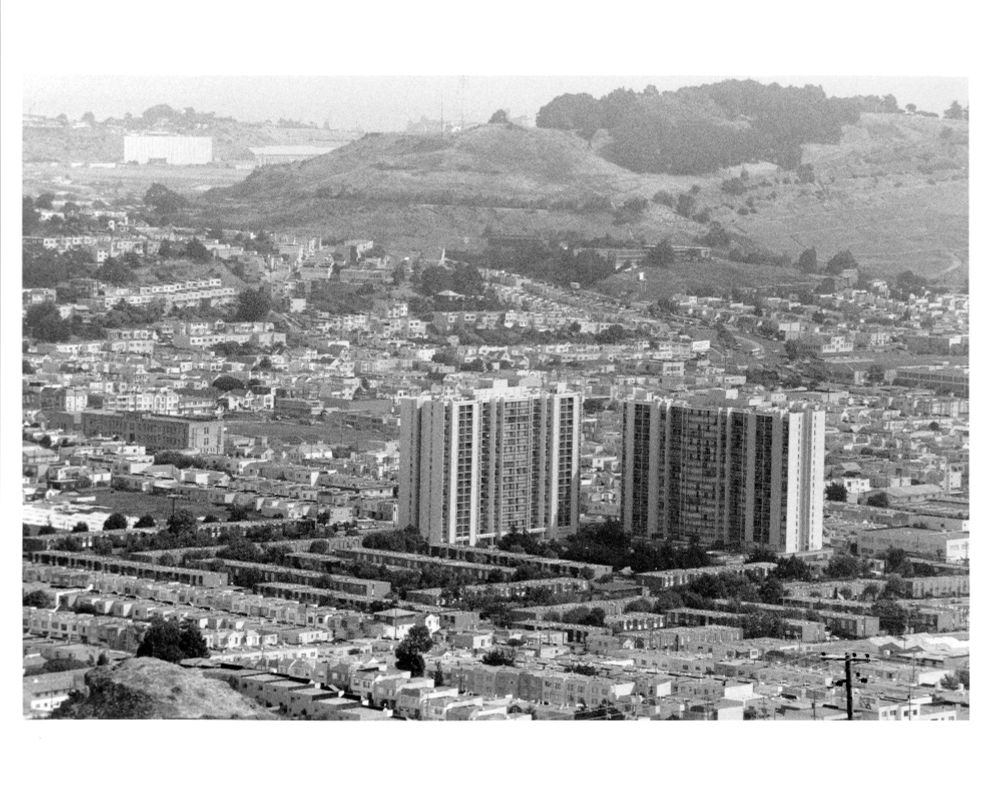 The plan was similar to many other large residential projects popular in midcentury America. Parkmerced and Stonestown had set the template across town in the 1940s and early 1950s, mixing garden apartments and towers on large landscaped grounds on the shores of Lake Merced. These small “cities within cities” often contained recreation facilities, playgrounds, lawns, and in the case of Geneva Terrace, a swimming pool.

Eichler Homes had already started construction on the Geneva Terrace townhouses when the 1961 National Housing Act was passed, making federal financing available to build residences for families of “average income.” Eichler often trumpeted that he was interested not as much in financial profit as “human gain,” and he was perpetually cash-strapped. He decided to modify his plans for the towers to get the federal money while addressing the city’s “middle income housing problem.” (San Francisco is historically and apparently eternally portrayed as suffering a housing crisis.)

Eichler’s architect Claude Oakland redesigned the towers, finding ways to make them pencil out with a $10 million FHA loan. Each building ended up with 573 two-and three-bedroom apartments with private balconies, all-electric kitchens, and walk-in closets. The deal for federal financing meant rents would be fixed, ranging from $137 to $158 a month, and restricted to families with incomes too high for public housing and deemed to low to compete for market rents. Vice President Hubert Humphrey traveled out for the official dedication of Geneva Towers on December 4, 1965.

For all his good intentions, Eichler was on rocky financial ground even with the federal loan and looked to unload Geneva Towers while they were still under construction. He pitched the San Francisco’s Housing Authority to buy them in April 1965, saying he was “a public spirited man” and would let the property go for just $11 million. The city was tempted, with one housing commissioner saying, “It would be the fanciest public housing in the United States.” 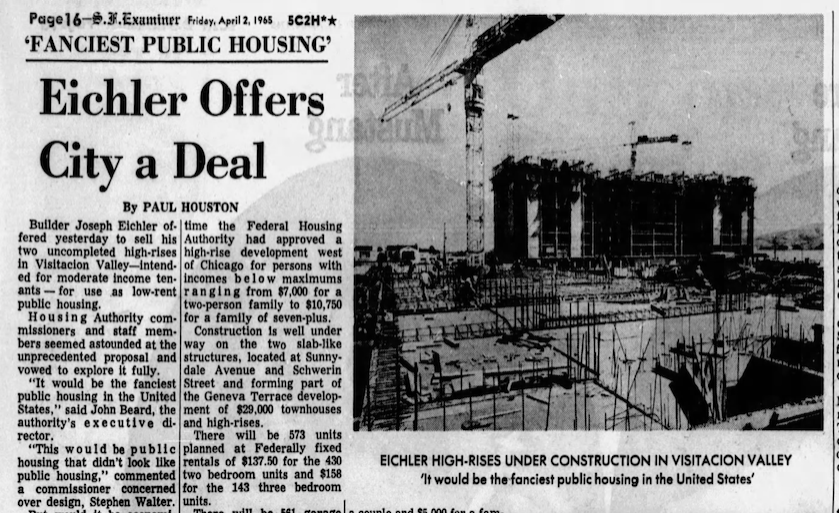 Eichler offered Geneva Towers to the city as public housing even before he finished construction. (San Francisco Examiner,, April 2, 1965.)

The city didn’t bite and in 1967, less than two years after the heralded opening with the vice president of the United States, the Eichler Corporation went bankrupt. Geneva Towers went into receivership to lenders and Federated Mortgage ended up with the property, running it as an absentee landlord from Los Angeles and paying interest on the original federal loans. The Housing Authority of San Francisco got involved after all, brought in to help subsidize tenant rents. Federal Section 8 assistance was granted for low-income families living at the towers in 1976.

Geneva Towers did not end up being the fanciest public housing in the country. The competing narratives and stories started and didn’t stop for the next twenty-five years, originating with racial and social prejudices and gaining steam when the property was allowed to deteriorate and crime rose. Although postal carriers and airport workers lived in the towers, some residents of the valley stereotyped the towers as filled with “transients,” “radicals,” and heroin addicts. Tenants fought the blanket judgments and name-calling, protested that the maintenance of the towers was non-existent, the management execrable, and filed lawsuits to force the owners to improve living conditions. In 1986, residents were without power for two straight days when the generators failed—no elevators, no lights, no running water, the toilets didn’t flush. The Red Cross had to be called in. 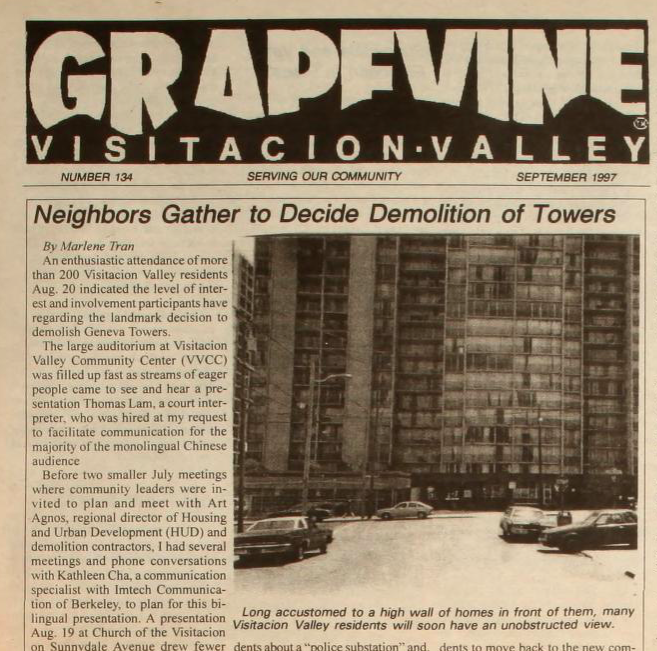 HUD worked with Geneva Towers residents to decide the development’s future, even the method of its destruction.(Grapevine Visitacion Valley, newspaper, September 1997. (Internet Archive)

As conditions worsened, vacancies rose and respect for the property dropped. Garbage chutes clogged, weren’t cleared, and so some tenants tossed their garbage off the balconies. Crime and gang activity spiraled up with the epidemic of crack cocaine addiction and dealing in the late 1980s. Fire fighters talked of bowling balls thrown down at them when they responded to emergencies. Dealers worked the hallways. In 1991 alone, Geneva Towers was the scene of three murders in the towers, four on the grounds, 30 assaults with deadly weapons, 48 batteries, and 33 shootings.

At that point the Department of Housing and Urban Development (HUD) stepped in, calling Visitacion Valley “a neglected urban backwater of 18,000 with rampant crime, awful schools, and a deplorable housing project called Geneva Towers.” (Gee, thanks, for the recognition, HUD.) The department foreclosed on Geneva Towers, recognizing that the owner failed to “maintain safe, decent and sanitary housing.”

HUD beefed up security, although the fencing, bulletproof glass, friskings, and 60-person security force weren’t popular with everyone. Banners reading “Homes Not Jails” and “Free the People” were hung from some balconies and Connie Chung came out to get in the middle of everything. Maintenance did improved and, somewhat radically, the government began working with the residents to decide the future of Geneva Towers.

HUD and an elected residents council announced in 1994 their joint decision to take down the 25-year-old towers and start anew. The land would be sold to the city for $1 to build “human-scaled” affordable housing. Former residents would be given first option on the “Heritage Homes” development that eventually replaced the towers.

Visitacion Valley residents got to decide on how Geneva Towers should be demolished through a community poll. Ninety percent of the almost 3,000 ballots voted for implosion over the wrecking ball.

On the afternoon of May 16, 1998, thousands of people picnicked on hilltops and brought out their cameras. At Visitacion Valley Middle School a ceremonial demolition box was plunged and hundreds of pounds of explosives set in the buildings’ columns brought the towers down.

Despite the cheers heard in every video of the event, many former residents made the point to reporters that Geneva Towers had been their home, the site of many happy memories, birthday parties, and family ties. Thousands of children had lived in the towers over three decades, growing up and making memories together.

Former resident Missy Raglin remembered Halloween haunted houses, sports tournaments, and Fourth of July barbecues. Despite its reputation, to her, Geneva Towers had “more good times than bad ones.”