San Francisco’s Richmond District — “between the Presidio and Golden Gate Park, from Lone Mountain to Ocean Beach” — is full of some of our favorite neighborhood businesses, from bakeries and bookshops to pubs and dessert cafes. It is also home to the “other Chinatown,” and Little Russia, with some of the best Chinese and Russian markets, shops, and restaurants in the city. Since the start of San Francisco’s Legacy Business program, several of this often-foggy district’s businesses have gained legacy business status. Today we’d like to highlight a handful of the few that have for years contributed to the cultural fabric of this neighborhood, and we encourage you to support their businesses during this difficult time if you can. 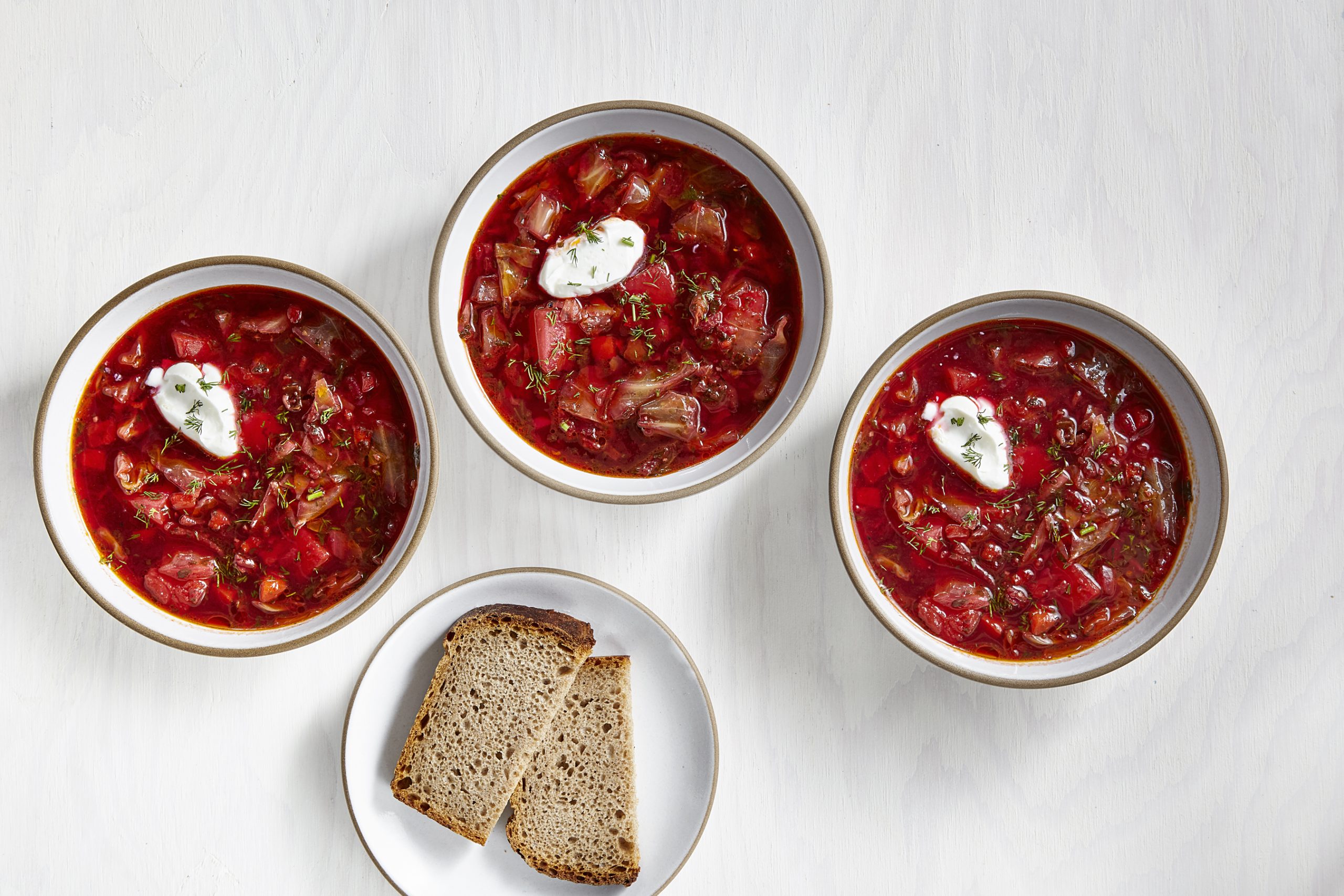 Cinderella Bakery and Café is a local Russian bakery, deli and restaurant located on Balboa Street in the Richmond District. Opened in 1953, Cinderella is the oldest authentic, home-style Russian bakery in the Bay Area. Two sisters, Lydia Repin and Eugenia Belonogoff, founded the establishment when they moved to San Francisco from Harbin, China. The café has been serving home style, traditional Russian pastries and specialties since opening and has become a treasured neighborhood café, known for their signature prioshkis, pelmeni, beef stroganoff, and loaves of freshly baked Russian bread. Their distinct logo featuring a Russian nesting doll is also instantly recognizable. 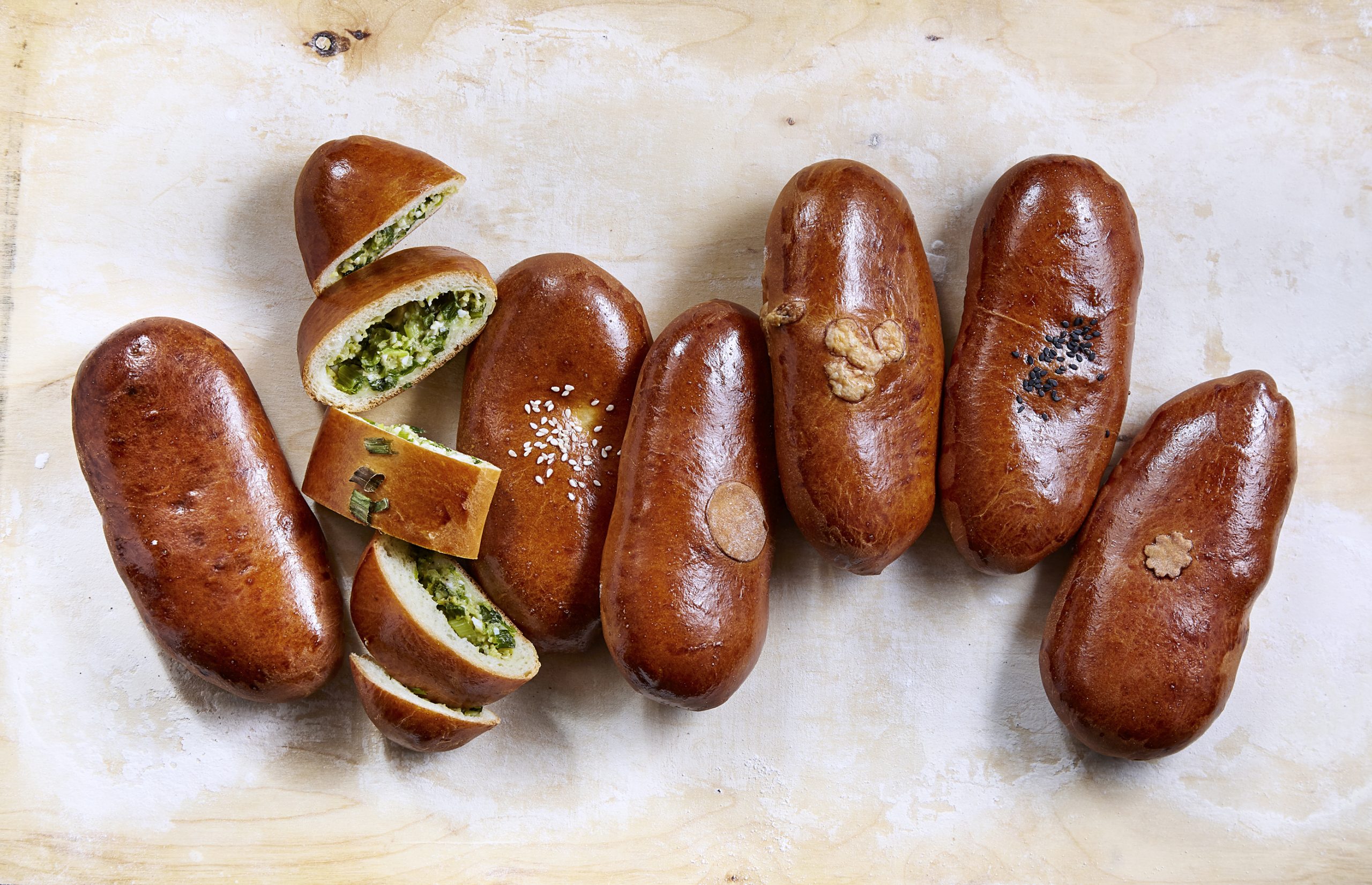 Cinderella Bakery and Café is located in an area of the Richmond District that is known as “Little Russia,” which extends from 17th Avenue to 27th Avenue around Geary Boulevard. This area is home to many Russian restaurants, shops, bakeries and Russian Orthodox Churches (New World Market, another legacy business, is another favorite serving Russian classics). The bakery continue to contribute to Russian heritage in the area by continuing the culinary and cultural traditions that were started when the restaurant opened over 60 years ago. One of the big events it sponsors is the annual Russian Festival, held at the Russian Center on Sutter Street, and the bakery also donates to the many Russian Orthodox churches and synagogues and associated schools throughout San Francisco.

Before the COVID-19 crisis hit, the café was planning an expansion to 24th Street in the Mission District, in a space formerly (and long) occupied by La Victoria Bakery. However, these plans have since been put on hold.

During the COVID-19 crisis, Cinderella Bakery is selling Gift Cards as well as our full menu which is available for take out now or delivery. They have also started offering Family Meals, which feed 3-4 people. 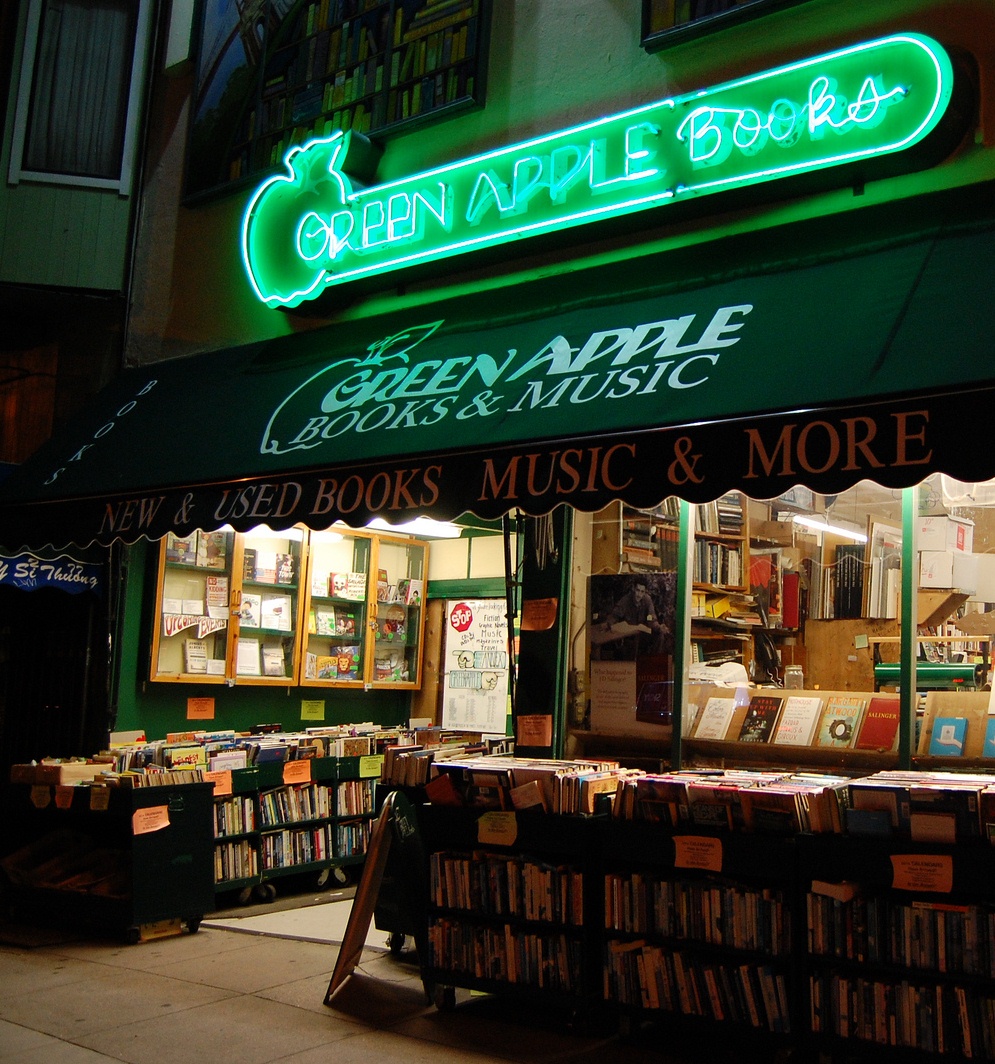 Counted among one of the best bookstores in San Francisco and beyond, Green Apple Books has been a literary destination for over 50 years. Located on Clement Street between 6th and 7th Avenues in a two-story commercial building, the business offers a large selection of new and used books, magazines, and music, and is considered a regional leader among bookstores. An anchor of the commercial corridor that has formed along Clement Street in the Richmond, Green Apple Books is also known for its note-worthy business practices. Its workers are unionized and it provides an example of successful succession planning, as three of its longtime employees have taken ownership of the business in recent years. 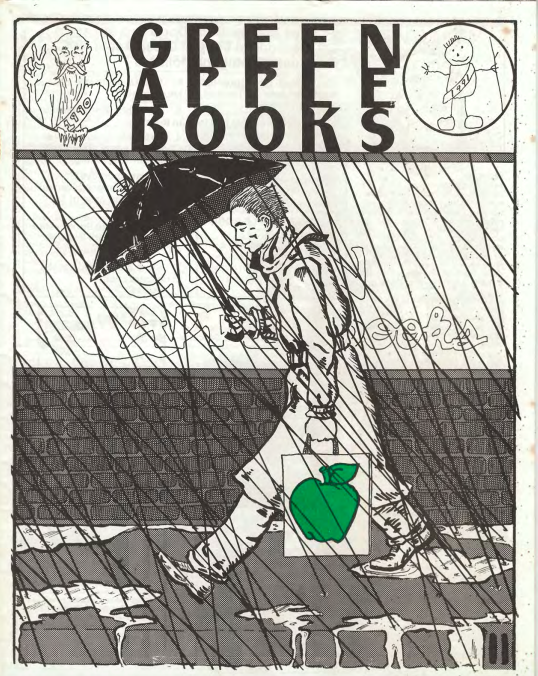 If you’ve been to Green Apple on Clement, you’ll immediately feel at home among the packed wooden bookcases, nooks and alcoves, original gas light fixtures, and handmade signs. You might attend a book reading in the Philosophy section, or browse some of your favorite records in the Music section. The shop’s bright green neon sign, installed in 1983, is an icon beloved by preservationists and survivor amidst the city’s long-fading neon.

In 2014, Green Apple expanded to the longtime Le Video space on 9th Avenue between Irving and Lincoln, near the south entrance to Golden Gate Park (renamed “Green Apple Books on the Park“). When they moved into the space, Le Video relocated to the second floor and they shared the building, hoping that their cohabitation would prove valuable to both businesses. Unfortunately, due to decreasing rentals, Le Video went out of business at the end of 2015. Their legendary collection was sold to the Alamo Drafthouse (2550 Mission St), where it is now available for rent. Books on the Park, like Green Apple’s original location, is a generalist bookstore with new and used books, but emphasizes children’s books, fiction, cookbooks, and new releases. Green Apple also recently took over the ownership of Browser Books in the Fillmore District in October 2019, now its third independent bookstore location.

In addition to purchasing books directly through the store online, you can support Green Apple during the COVID-19 crisis by purchasing gift cards here, STAY HOME READ BOOKS shirts and hoodies here, and teacher THANK YOU cards with gift cards here. The bookstore is also offering free online ZOOM backgrounds for your virtual meeting needs, here. You can also help keep the community safe while showing off your love for the bookstore by purchasing cotton face masks here. 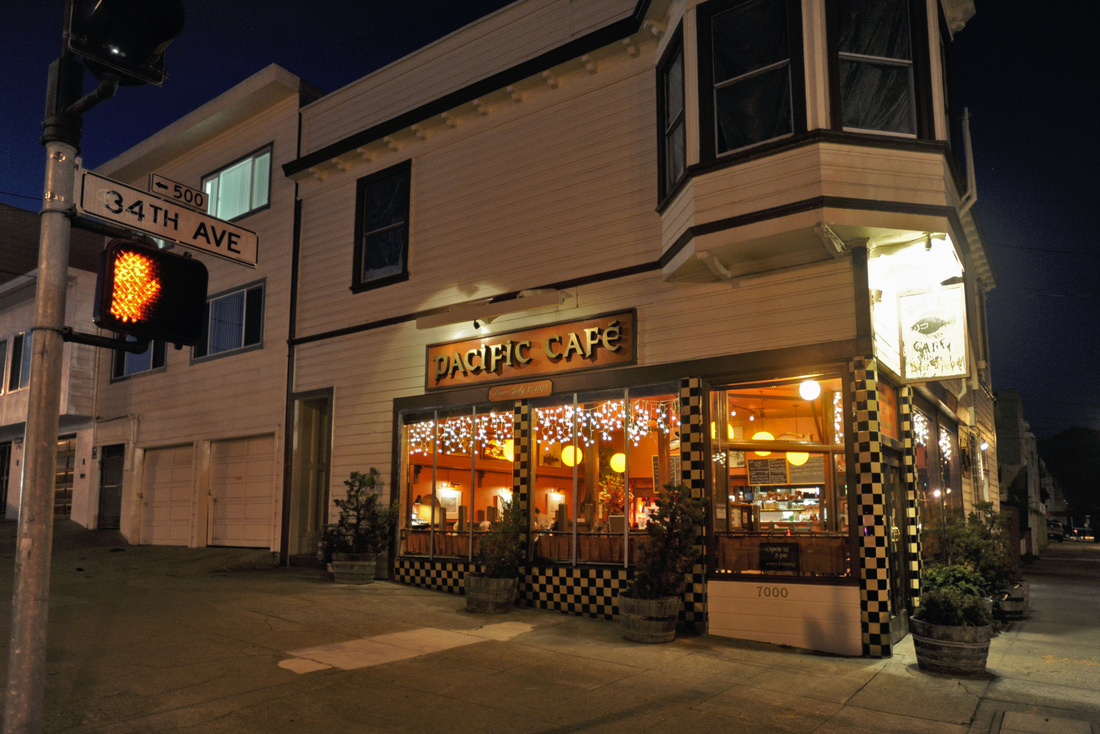 Pacific Café has been serving up fresh seafood and free wine to line dwellers for 46 years at the corner of Geary and 34th Avenue. Established in 1974 by Tom Hawker, Ross Warren, and Frank Condroy, it has remained a casual classic in the neighborhood, and many of the staff have been there for decades. The eatery is well-loved by diners for its fresh, no-frills food and atmosphere (and no reservations policy). The beloved neighborhood restaurant was one of the first establishments to join the Legacy Business Registry, accepted in the program’s first round in August 2017 (the other was Toy Boat on Clement Street).

In 2006, Pacific Café was featured on the KQED food review show “Check Please! Bay Area (now in its 15th season). You can watch or listen to the episode here.

During the COVID-19 crisis, the Café has been forced to close. They are asking for donations to help their hard working staff who have lost their incomes and are struggling with their expenses. You can contribute to their GoFundMe page here. 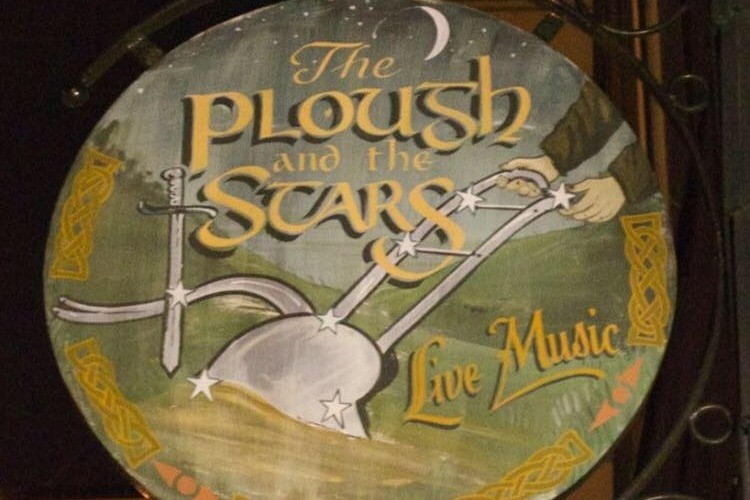 For 45 years The Plough & Stars (“the Plough”) in San Francisco has been the heart of the Irish traditional music scene on the West Coast. A major touring location for renowned musicians from Ireland and beyond, it has also supported local musicians with sessions and set dancing each week, as well as bluegrass and Americana music on weekends. The Plough provides an atmosphere of camaraderie and good cheer for patrons coming in for set dancing, beer on tap, pool, darts, and charitable events. 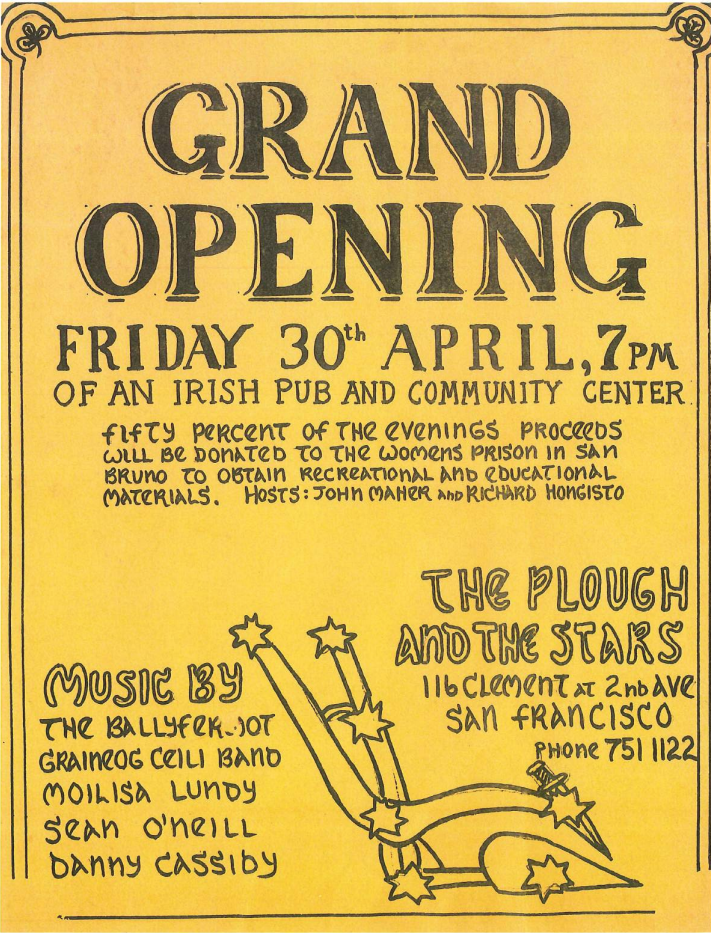 A flyer for the Plough’s grand opening and benefit on April 30th, 1975, Courtesy of the Plough’s Legacy Business Registry Report.

The Plough opened on April 30, 1975, at 116 Clement Street and has remained at the same location for over 40 years. The name “the Plough and Stars” comes from a famous play written about the Easter Rising of 1916 by the Irish writer, Sean O’Casey. Some hallmarks of the pub and event space are the long, dark, wood bar, original art, signage and historical posters that tell the history and culture of Ireland, and the small wooden stage surrounded by pictures of past and present musicians that have played over the years.

Since 1981, the Plough and Stars has been a central location for newly arrived Irish immigrants to network for jobs, housing, music and romance. The bar was a gathering place for Irish immigrants who were forced to leave Ireland during the severe economic recession of the 1980s. Many immigrants were drawn to the Richmond District due to its historically Irish population, and the Plough and Stars was known as a gathering place. Irish immigrants and existing Irish people met to look for work, play music and join a community. Many of the people that found the beginning of their life in America at the Plough still continue to patronize the establishment. 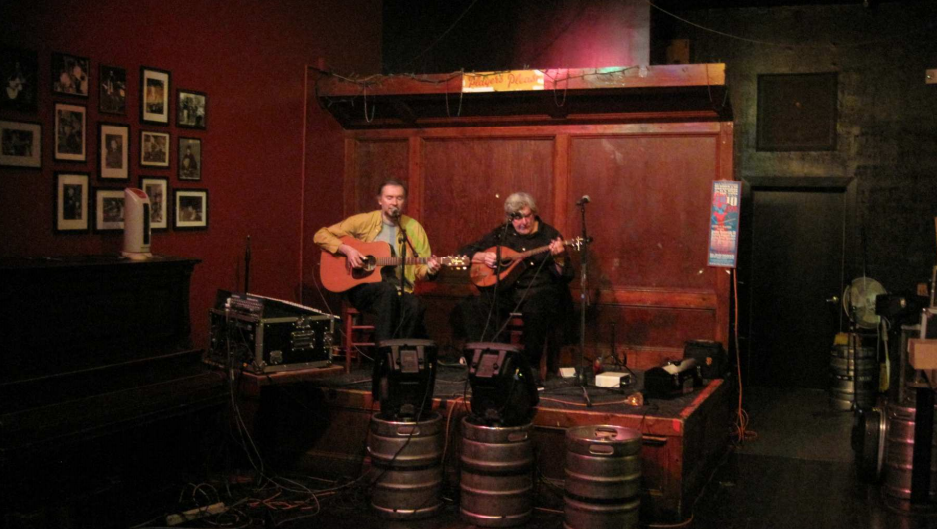 Musicians performing inside the Plough and Stars, undated. Courtesy of the Plough’s Legacy Business Registry Report.

During the COVID-19 crisis, they are asking for donations to help pay rent on the building, employee wages, and for providing a venue for musicians and dancers when the shelter in place order is lifted. You can contribute to their GoFundMe page here.