On a jetty that forms the small Boat Harbor in San Francisco’s Marina District, stands one of the city’s quirkiest and most wonderful creations: The Wave Organ.

Surrounded by stunning views of the San Francisco skyline and the Golden Gate Bridge, the Wave Organ is a wave-activated acoustic sculpture created in 1986 by former Exploratorium artists-in-residence, Peter Richards and George Gonzalez. Richards’s inspiration for the piece came from artist Bill Fontana’s recordings made of sounds emanating from a vent pipe of a floating concrete dock in Sydney, Australia.

In 1980, Richards, who was a Senior Artist at the Exploratorium for many years, received a planning grant from the National Endowment for the Arts that enabled him to research the mechanics of bringing this new sound concept stateside. During this time he built a prototype in the Wave Organ’s present location, which he presented as part of the New Music ’81 Festival, the largest experimental music festival in the world. Though very rudimentary in nature, it generated enthusiasm and support for a permanent work. The Exploratorium’s Founding Director, Frank Oppenheimer (famous for working on the Manhattan Project in Los Alamos with his brother, J. Robert Oppenheimer), started permit and fundraising efforts soon after, but actual construction did not start until September 1985, seven months after his death. The Wave Organ was completed in May 1986 and was dedicated in Oppenheimer’s memory. 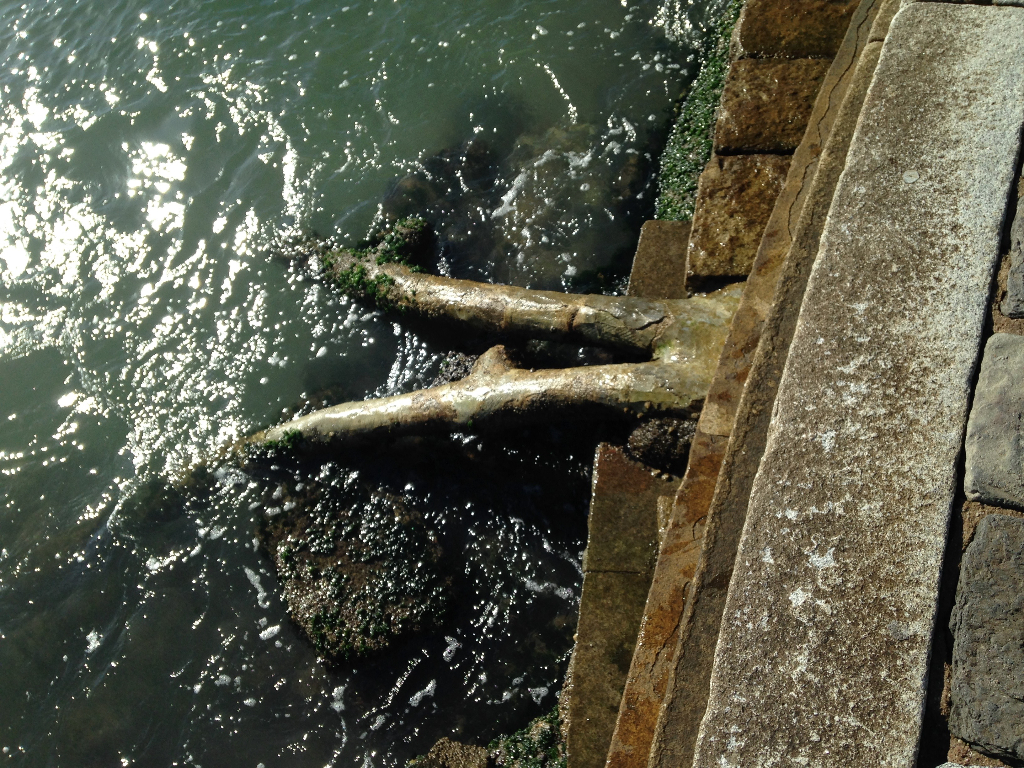 A look at some of the Wave Organs specially-constructed pipes leading from the installation into the Bay. Photo courtesy of California Curiosities.

To create the Wave Organ, Richards, with the help of sculptor and master stone mason Gonzalez (and hundreds of volunteers), excavated the site, and installed the 25 organ pipes made of PVC and concrete at various elevations. The jetty that the Wave Organ stands on is made of a wonderful assortment of carved granite and marble taken from San Francisco’s demolished cemeteries around Lone Mountain. Other public works projects in the city which used recycled cemetery stones were the gutter pathways in Buena Vista Park and the old seawall along the Great Highway.

In this short video, Woody LaBounty and David Gallagher of the Western Neighborhoods Project set up at the Wave Organ to give a short history of San Francisco’s demolished cemeteries, and to share a look at old tombstones remnants hidden there and in spots around the city (as many may already know, we are happy to have Woody now working with us at Heritage)!

What does the Wave Organ’s “music” sound like? Roadtrip America poetically described it: “It’s like listening to the world’s largest sea shell. It’s like distant drums, muffled cymbals, quiet thunder. The variety is endless, and the sounds of the pipes are punctuated by the cries of gulls and the barks of sea lions. The sounds of ships’ horns drift across the bay, and little waves slap against the stones.” Sound is created by the impact of waves against the pipes, and the subsequent movement of the San Francisco Bay waters in and out of those pipes. For those expecting something loud, the sound heard at the site is actually very subtle, requiring visitors to become sensitized to its music and the music of the environment. Richards says the Wave Organ’s sound is best at high tide, so check the tides before you go!

Listen to the Organ’s “music in this clip below:

Getting there: The Wave Organ is at the end of Yacht Road, past the Golden Gate Yacht Club in San Francisco, California.