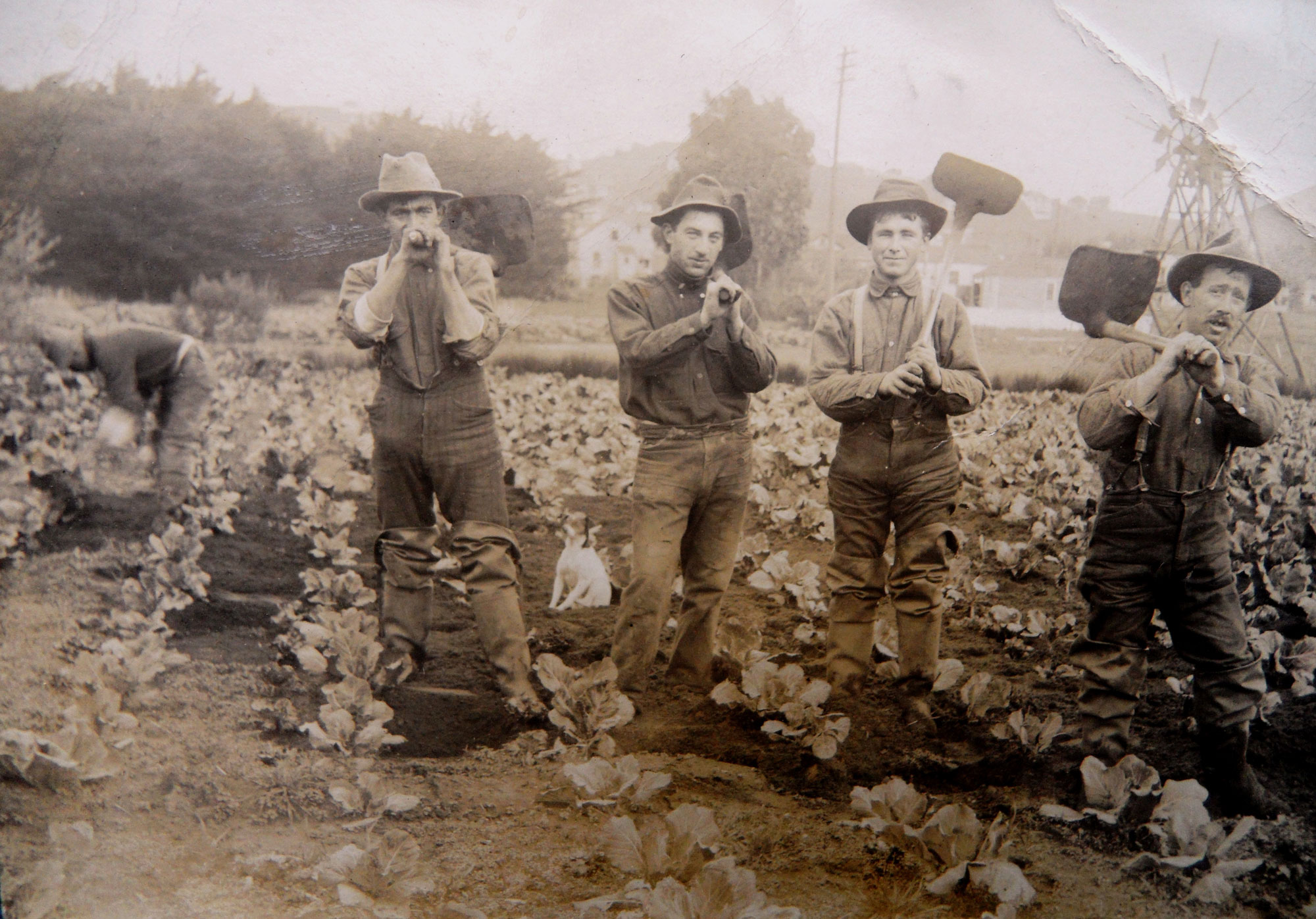 Until the early twentieth century, Visitacion Valley was a neighborhood mostly of farms and acres rather than houses and streets. The weather, soil, and fairly sheltered disposition made it ideal for agricultural and horticultural enterprises. The Spanish used the valley and surrounding hills for cattle grazing. Francois Louis Alfred Pioche, the big man of early San Francisco’s French community, owned a rose nursery in the valley. Henry and Ottilia Schwerin owned land on both sides of the county line from the 1850s to early 1900s, running both a dairy and a tulip nursery near where the Cow Palace is now. A patchwork quilt of smaller dairies filled most of the valley land to the bay, around Candlestick Cove, and south into Daly City.

As with land in the nearby Oceanview, Portola, and Excelsior districts, Italian truck farmers like the Rossi and Sechini families grew produce on leased and owned acres to sell downtown. The extensive early irrigation systems of the farmers gave the area the area its first nickname, “Valley of the Windmills.” Greenhouses, also associated with Italian names such as Gatti and Restani, filled whole blocks of the neighborhood well into the 20th century. While cabbages of the fields went to the city’s produce market, which once operated where the Golden Gateway development is today, the greenhouse flowers were driven for sale to the Flower Mart at Brannan and 6th Streets, which still opens up at 4am three days a week. 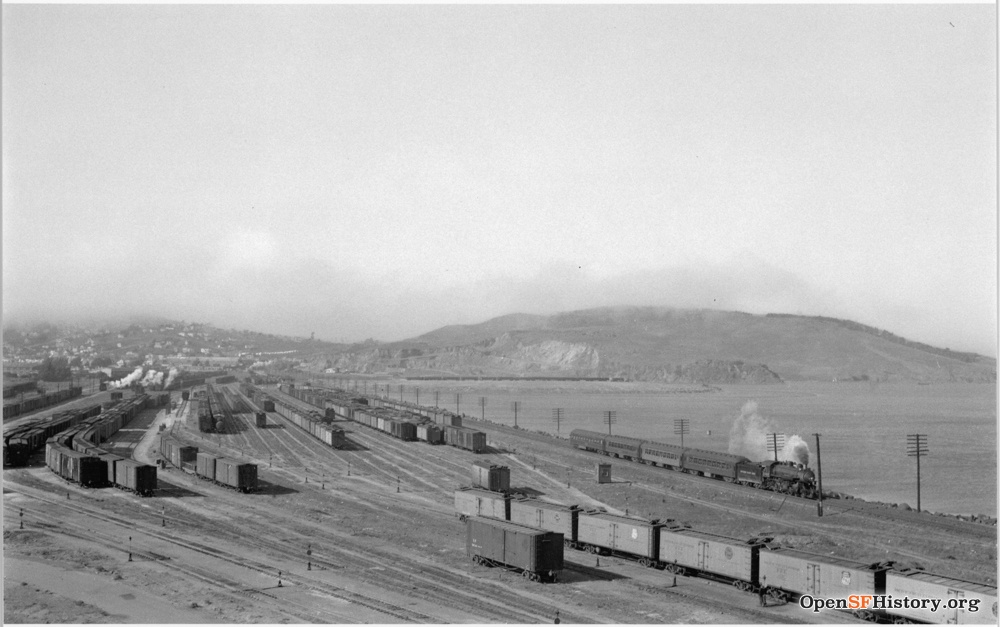 View north across Southern Pacific Bayshore yard in 1947 before bay was further filled in for the Bayshore freeway/Highway 101. (Waldemar Sievers photograph, OpenSFHistory/wnp27.50211)

Visitacion Valley’s open space and access to the bay, early roads, and (later) railroad lines, also made it an attractive location for industry. The Union Pacific Silk Manufacturing Company opened a factory in the 1870s across from the Six Mile House roadhouse. A couple of quarries and several large breweries followed, along with the Pacific Coal and Fertilizer Company in 1890. The Southern Pacific laid tracks on bay fill to create the “Bayshore cutoff” in 1907. The “SP” soon after built an enormous railyard and shop complex sprawling over 200 acres, cutting the first Visitacion Valley streets off from the bay. As the main maintenance center for the company’s Coast Division, the Bayshore yard employed hundreds of employees, many of whom lived in the valley.

To me as a boy, Visitacion Valley was synonymous with one thing, easily seen from Highway 101: the giant Schlage Lock factory standing just north of SP’s hydra of railroad tracks. The company came to the valley in the 1920s, and built up a 12-acre complex of factory, distribution, and administration buildings. Most all doors in San Francisco and millions around the world seemed to have Schlage locksets. The company perfected and popularized the “push-button” door lock with the spring button set in the center of a doorknob. During World War II, Schlage also produced shell casings, bomb tail fuses, aircraft parts, and proximity fuses.

By the 1970s, Schlage was the largest manufacturer in San Francisco, employing 1,600 people. Like with the SP yard and shops, many of the Schlage employees lived just across Bayshore Boulevard in the residential streets of Visitacion Valley.

Before the twentieth century closed, Schlage Lock and the SP were both out of the valley. Schlage moved operations to Colorado and train maintenance and storage was distributed to other locations.

A push for a Home Depot on the site were stopped by neighbors and for two decades plans for new housing (affordable, green, we are told) have been in the works. Combining the Schlage acreage with part of the SP land and much, much more, the latest housing iteration is called The Baylands, a 700-acre development running from Visitacion Valley into San Mateo County. 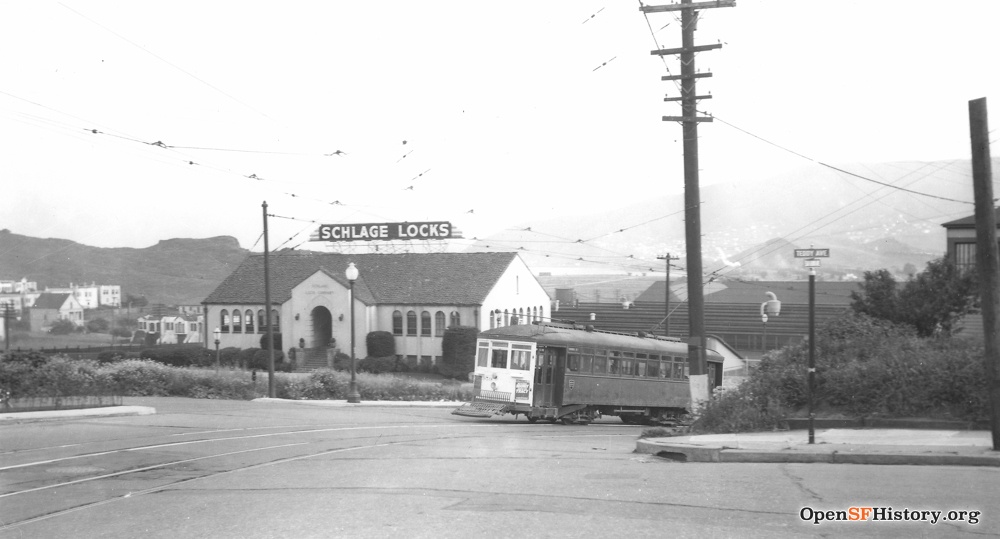 The Schlage administration building was built in 1926, designed by notable architect William P. Day. (His work includes the Don Lee Cadillac building at 1000 Van Ness Avenue and the Mark Hopkins Hotel.) The building still stands, albeit without its old Schlage sign. It is now reserved for offices and a welcome center to the “reimagined urban living” of 5,000 homes and eight neighborhoods supposedly on the way. I walked by the office the other day and tried the door.