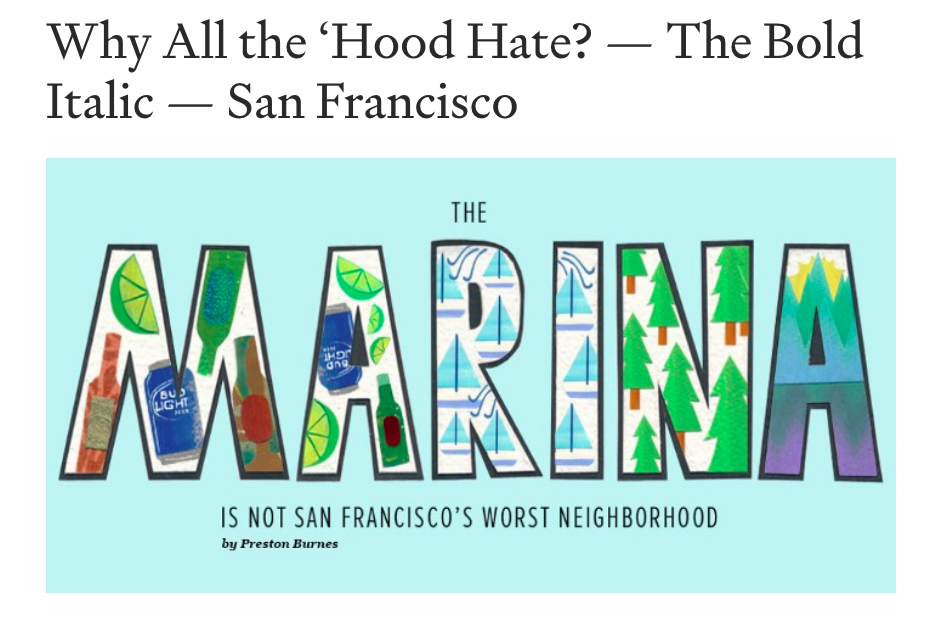 Snapshot of a Bold Italic article about the Marina District from 2013.

As we kick off our focus on the Marina District for the month of October 2020, we need to get something out of the way: we know that people in San Francisco love to hate the Marina. One author (and Marina resident) at The Bold Italic  in 2013 described the stereotype of Marina-ites as “a bunch of shallow postcollegiate Caucasian transplants spending trust funds on their Jäger addictions and Cosmo subscriptions, while employed in roles that could never be described as “creative.” Ouch.

An SF Weekly article from 2001 is titled “Forgive me, I live in the Marina,” and the author attempts to pinpoint the origins of what she calls the “Marina Person.” Evidence of “Marina People’s ancestors,” she says, can be found in Armisted Maupin’s 1976 Tales of the City, which describes them “scamming in the Marina Safeway.” The heydey of the “Triangle” of bars at Greenwich and Fillmore in the ’80s, and young professionals moving in after landlords slashed rents post-1989 earthquake, are cited as other causes of the stereotype.

Even before the 1989 earthquake, young people were moving in. A history paper by San Francisco State student J. Raymond Delong from August 1966 notes that in the Marina “There are lots of young single people…they pool their salaries and can afford the rent which is much higher in the Marina then they would be elsewhere in the City for comparable accommodations.” Delong also notes that there “doesn’t seem to be much sense of family” in the Marina, and makes an interesting correlation between that and the lack of any churches in the district.

In 2013, Boston-transplant Jason Evanish wrote about how “Neighborhoods Define You” in “25 Things I Wish I Knew Before Moving to San Francisco“: “Like any stereotype, it’s not always true, but you will find that yes, there are a lot hipsters in the Mission, bros in the Marina and families in Noe Valley.”

The Bold Italic concedes that “[The Marina] has its problems, such as a striking lack of cultural or economic diversity, an often unfortunate population of nonresident drinkers on weekends, and the distinct likelihood of liquefaction in an earthquake. But nearly everything has imperfections, flaws, and scars, and my neighborhood and your neighborhood are no different in that way.”

SF Gate’s Lauren Parvizi takes it one step further and lists the district’s positive attributes in 2015’s “Why the Marina is amazing — despite what you’ve heard.” (Fort Mason! Lucca Delicatessen! Walkable!)

We want to hear from you! Share stereotype-breaking stories, people, and places in the Marina.