From OpenSFHistory’s extensive (and growing) collection, spanning the 1910s to 1980s. 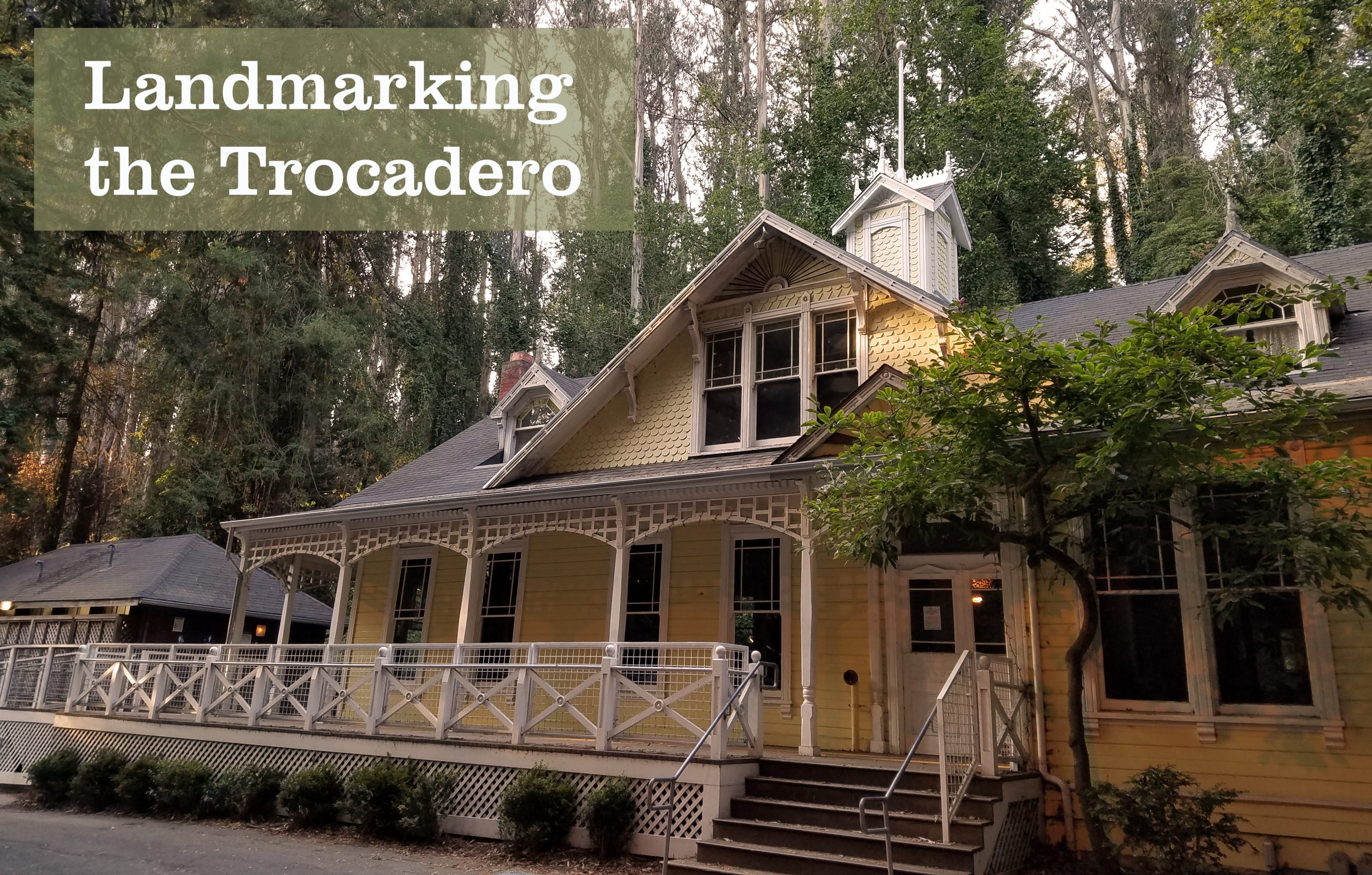 March 14, 2022: The Board of Supervisors’ Land Use and Transportation Committee unanimously recommended designation of the Trocadero Clubhouse as a city landmark. Visit the Parkside Heritage page for more information about the campaign!

Kerri Young and Woody LaBounty introduce the Parkside District’s history and goals for Heritage in the Neighborhoods.

San Francisco’s Parkside District lies on the southwest quarter of the city on slopes north of Stern Grove and Pine Lake Park. While often lumped within the greater Sunset District, the Parkside has its own specific origin story, development pattern, architectural character, and social history. Far from a featureless landscape of identical stucco homes (a stereotype often applied to the entire Sunset District), the Parkside contains rich physical and cultural characteristics, long-standing and beloved businesses, and dedicated community organizations. 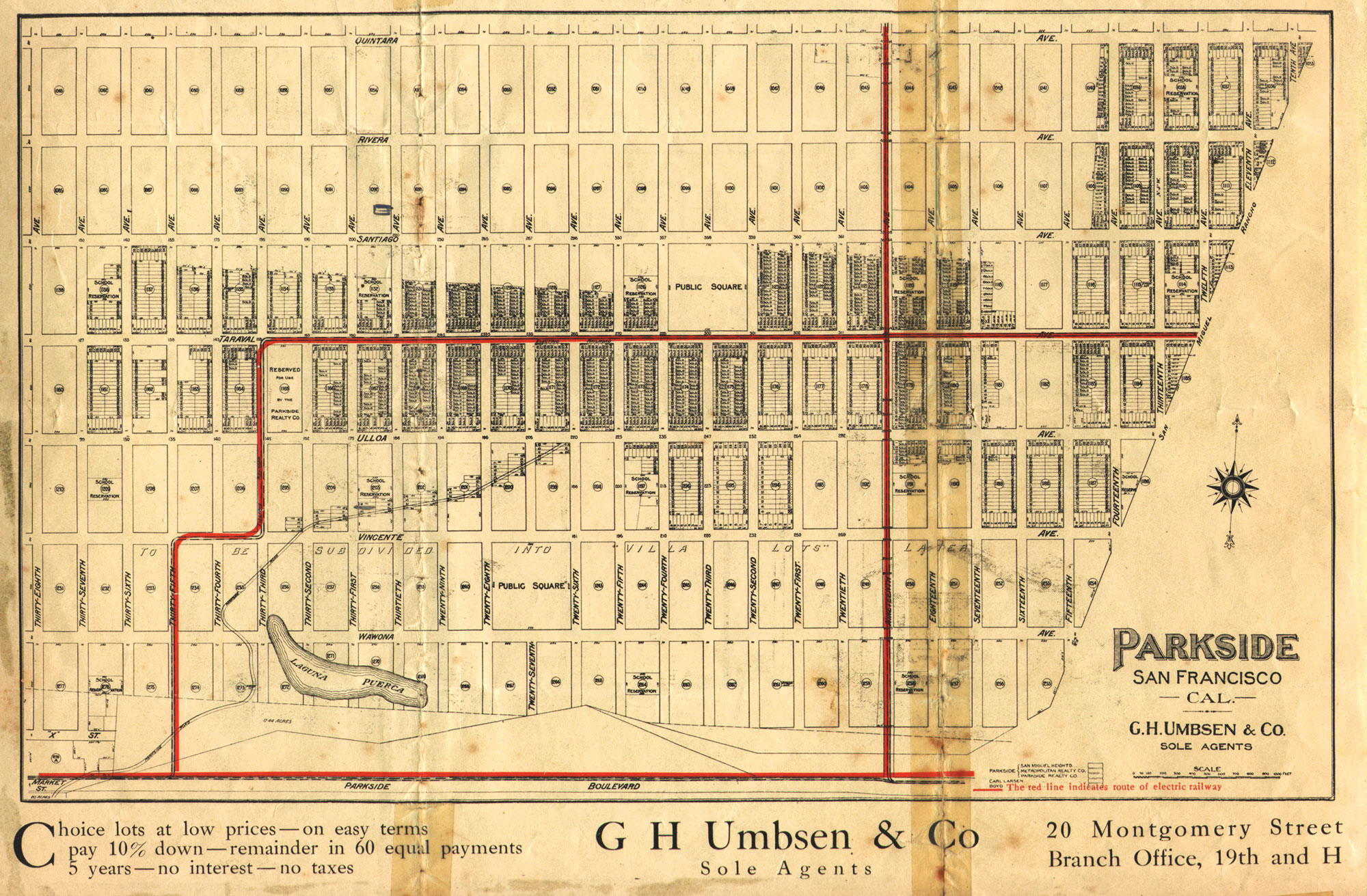 In 1905, a group of investors filed a plat map with the city to develop a new residential “suburb” on land running from the diagonal boundary of an old Mexican land grant (Rancho San Miguel) in today’s Golden Gate Heights west to 33rd Avenue, and from Quintara Street on the north to modern-day Sloat Boulevard on the south. The group boldly named the new residential district “Parkside,” despite Golden Gate Park being a mile and half away. Incorporated as the Parkside Realty Company, the firm marketed a foggy landscape of sand dunes and scrub as “ten degrees warmer than anywhere else in the city.”1

Development began in 1907, with 62 speculative cottages built and targeted to “working people.” The simple 800-square-foot frame houses with essentially identical floor plans had six different facade treatments. Most of the cottages still stand, although many have been unsympathetically remodeled and raised for garages over the past 113 years. 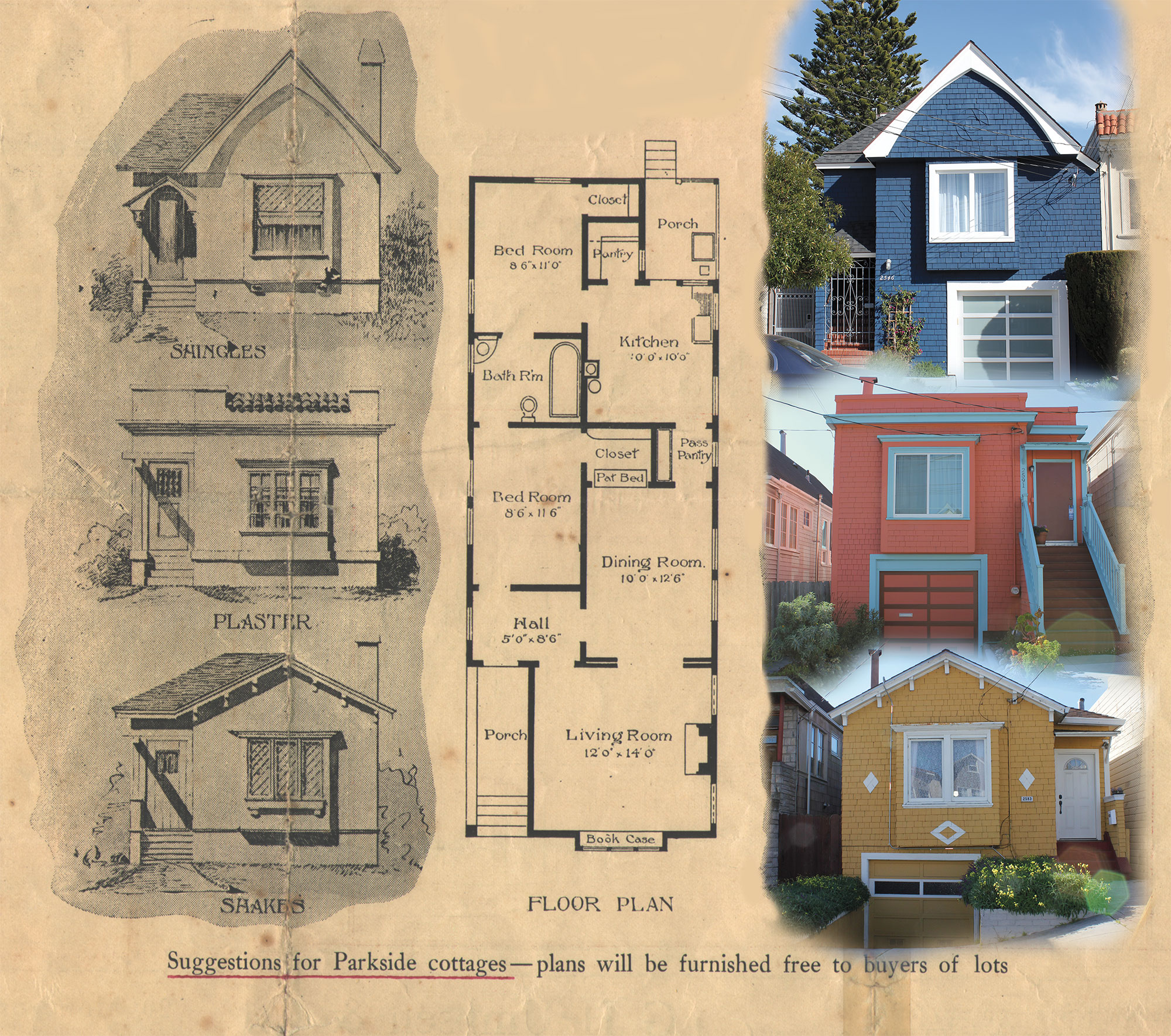 In the years before the First World War, some 120 Arts-and-Crafts-style houses, both large and humble, were built in addition to the 62 small cottages the company erected in 1907-1908. The community was remote and lacked good transportation options and many essential city services. With a one-room school house, single store, and a volunteer fire department, the Parkside more resembled a country village than a city neighborhood in its early years.

Significant in-fill of the neighborhood did not occur until the 1920s. Period Revival facade treatments, popular throughout the city in the 1920s and 1930s, became the Parkside’s dominant style. The level of detail and quality in the rows built by Parkside Realty, the Lang Company, and smaller-scale builders are acknowledged by many architectural historians as superior to most other sections of the Sunset District. Shaped and curved entry stairs, storybook turrets, expressive moldings, and florid baroque window surrounds are all found in the blocks between Taraval Street and Stern Grove. 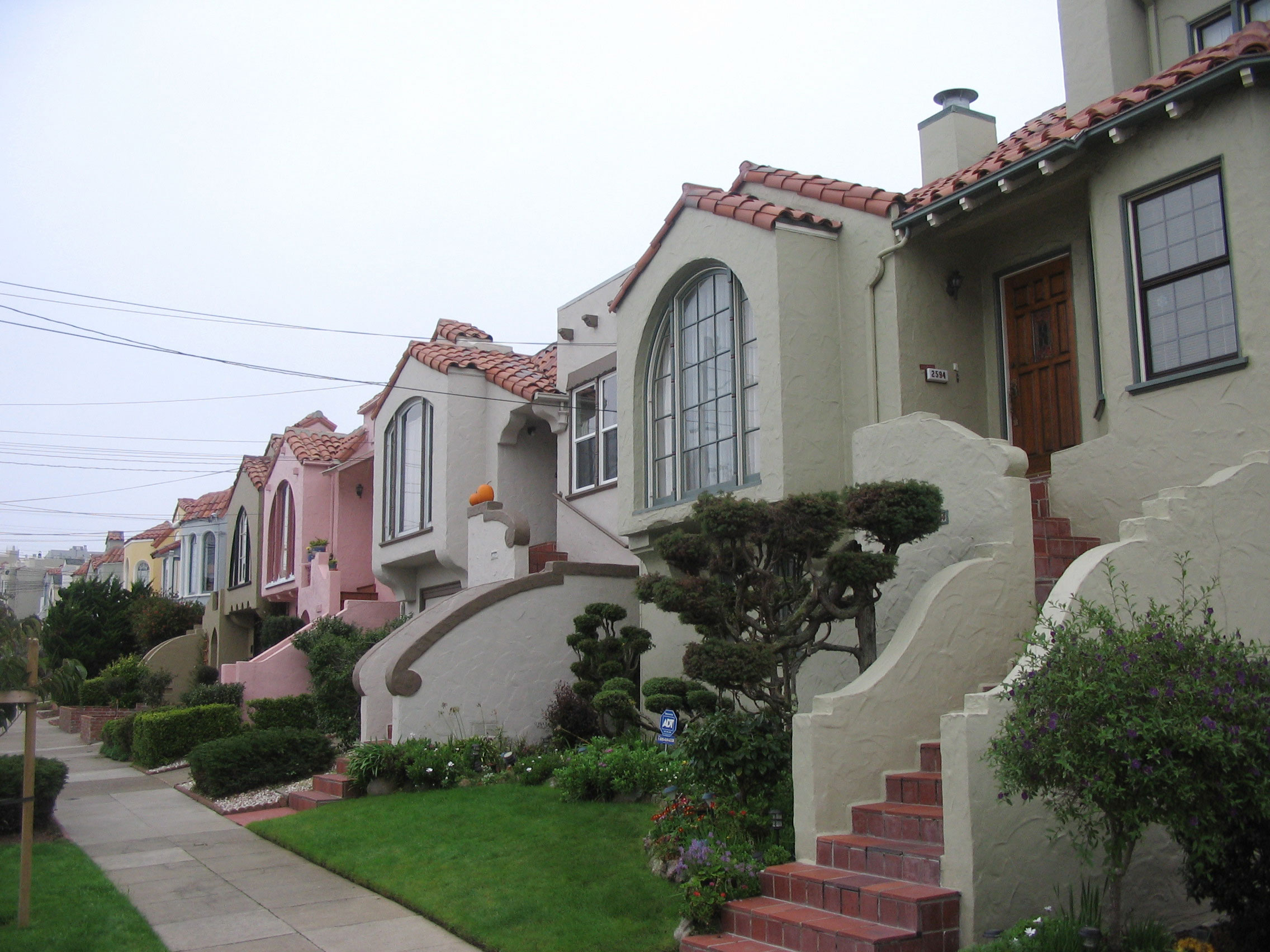 While not approaching the heights of unity and style found in other neighborhood shopping corridors such as Chestnut Street or West Portal Avenue, Taraval Street has some stand-out storefront buildings, especially at the intersection of 21st Avenue, where a Mediterranean-style commercial block retains high integrity across from a building with a highly-elaborated Art Deco parapet. 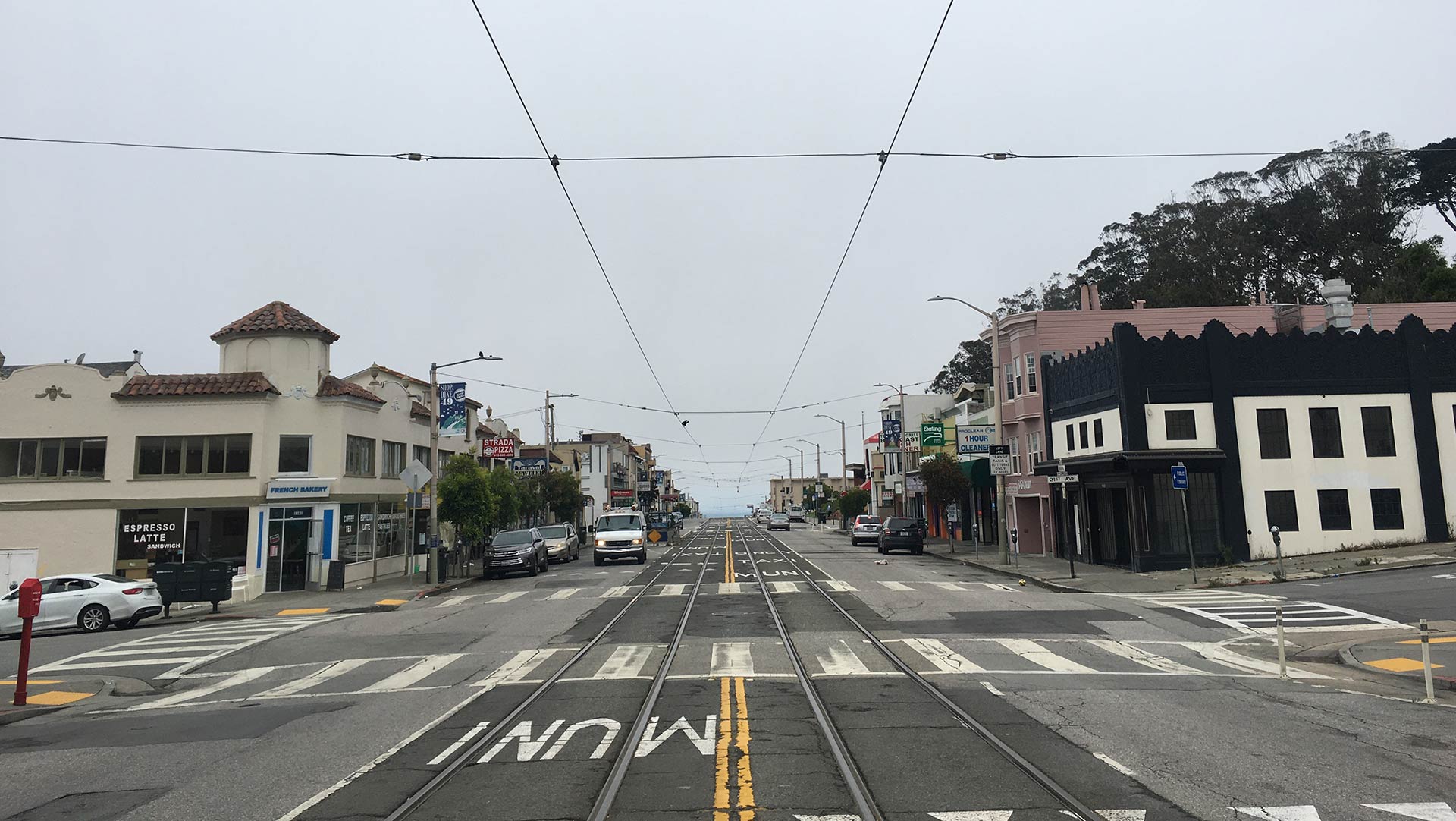 Distant from other settled sections of the Sunset District during its early development, the Parkside established a sense of individual identity. From the beginning its own strong community groups, neighborhood newspapers, merchant associations, and hosted annual May Day celebrations known across the city.

The remoteness and large open spaces of the Parkside, which may have been a check to early prospective house buyers, attracted institutions looking to move from the city’s urban core to more bucolic settings. In 1924, the city’s Presbyterian Orphanage relocated to a new “Edgewood” campus centered on Vicente Street and 28th Avenue. In 1928, the Junior League of San Francisco opened its Pinehaven Emergency Lodge on 30th Avenue and Escolta Way as short-term accommodation for children awaiting placement in orphanages and foster homes. Pinehaven became Pinehurst after its transfer to the Salvation Army in 1946, and continues a mission of service to this day. Both buildings retain a high degree of architectural integrity almost a century after construction. 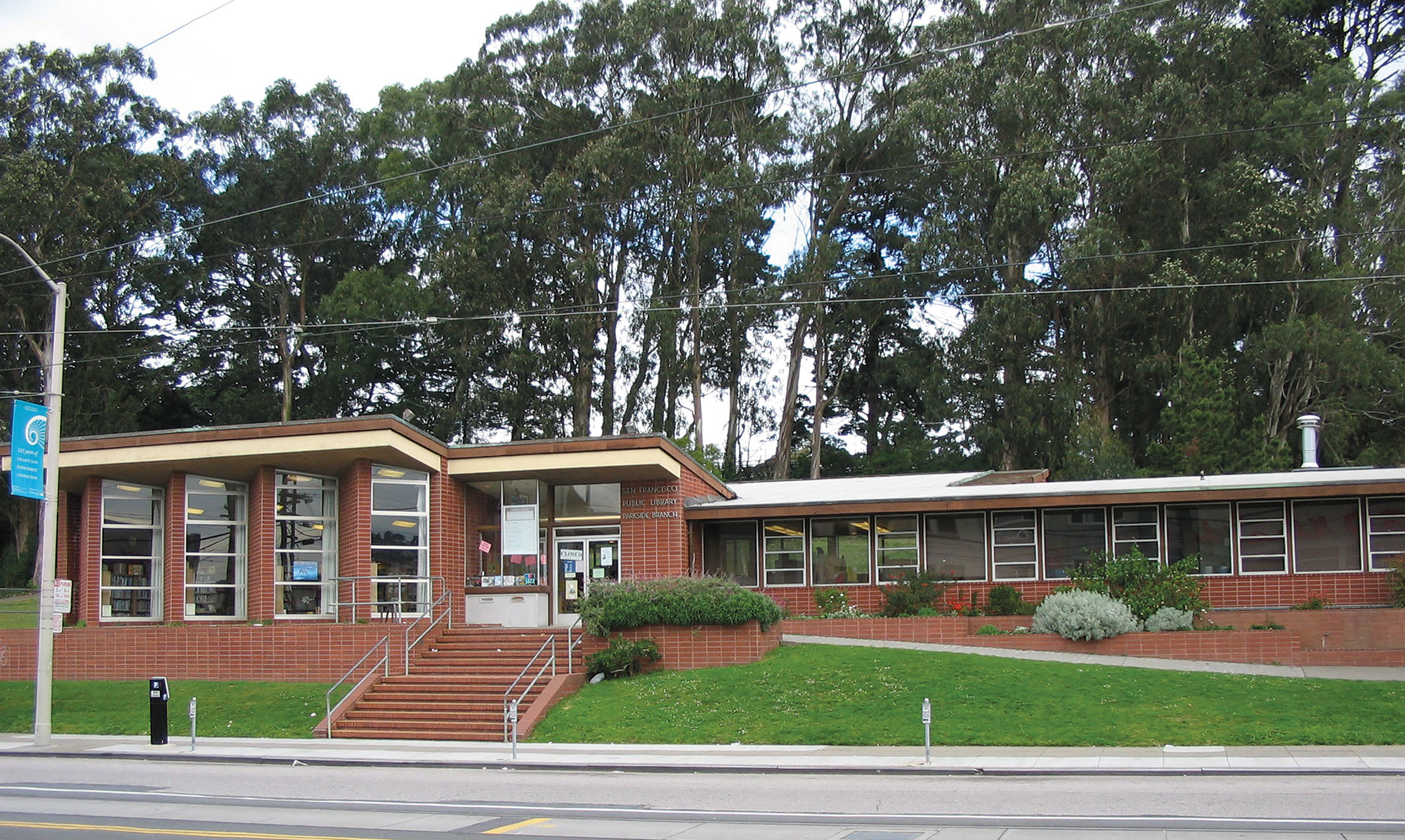 The Parkside Branch Library on Taraval Street at 22nd Avenue was the first in a series of new branch buildings constructed in the 1950s and designed to resemble the openness and coziness of a suburban ranch-style homes, complete with fireplaces, large plate-glass windows, and patios. While other branches designed by architects Appleton & Wolford have been designated with City Landmark status, their first and most realized version in the Parkside so far has not. 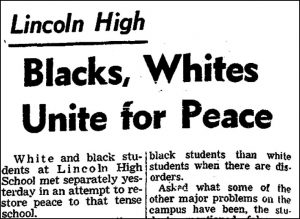 Headline from San Francisco Chronicle, May 1, 1969, after white and black students held a summit to address racial tensions and inequities.

Early Parkside Realty advertisements called the neighborhood “the ideal home section” of San Francisco, but its ideal homes were not available to everyone.2 For decades the Parkside was overwhelmingly white, one of the most racially-homogenous neighborhoods in the city, and forces in the neighborhood tried to keep it that way. After hearing that a Filipino buyer was interested in a Parkside home, the Parkside District Improvement Club wrote a letter to the Real Estate Board in 1942 asking for advice on stopping the sale.

At Lincoln High School in the late 1960s and early 1970s there were highly-publicized altercations between black and white students and claims of discrimination to African-American pupils and teachers. But Lincoln also hosted notable student activism and rallies for racial equity.3 Some changing attitudes even came to the Parkside District Improvement Club, which crowned its first non-white May Queen in the early 1970s. In the 1980s and 1990s, many Chinese-American families began to move to the Parkside. By the mid 1990s, 70% of students at Lincoln High School identified as of Asian descent, and today 54% of the 18,000 Parkside residents do.

The Parkside’s sense of community remains. From the 1930s to the 1970s, McCoppin Square was the site of large family-friends May Day festivals hosted by the Parkside District Improvement Club; now the People of the Parkside-Sunset (POPS) group hosts a family-friendly series of movie nights there. The quiet streets of single-family homes, ample parkland, and proximity to public transportation and businesses on Taraval Street still attracts home-buying families looking to put down roots, even if the foggy climate belies the Parkside’s advertised description in 1908 as the “sunny slope of the Sunset District.”4 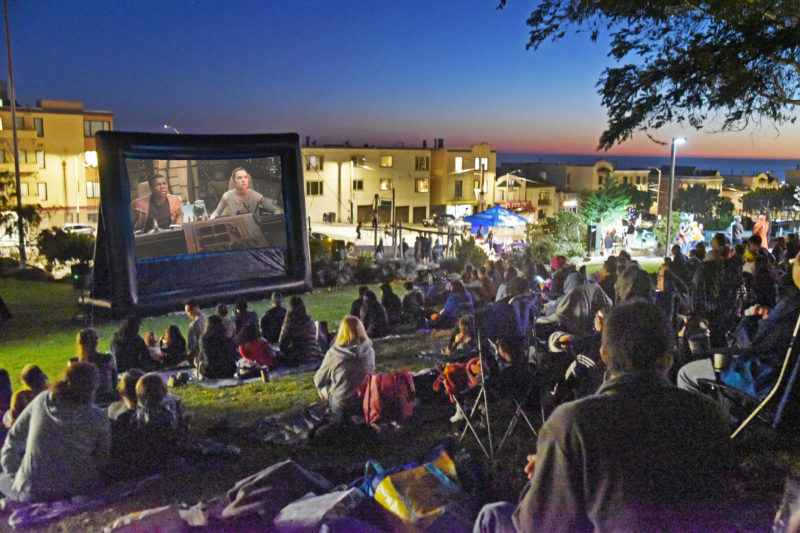 “Movies in McCoppin,” an annual event produced by the People of Parkside Sunset (POPS) each year. (Photograph by Kurty Photography.)

On Tuesday, March 9, the San Francisco Board of Supervisors voted unanimously to support Parkside… Read More

Kerri and Woody introduce the history of the Parkside District in this webinar. And just… Read More

Watch: Short videos on the Parkside’s architectural and cultural history on our Youtube channel