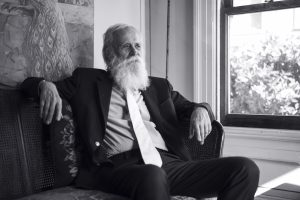 Longtime San Francisco Heritage friend and benefactor, Norman Tyler Larson, passed away peacefully in the presence of family on February 20, 2018. A fourth-generation San Franciscan, Norm was born on September 8, 1938. He received a full academic scholarship to attend Stanford University, where he earned a degree in Economics, later followed by a Law degree from Harvard. Somewhere along this journey through law school and a tour with the California Air National Guard, Norm decided practicing law and, as he put it, “a series of career failures” was a deductive way of developing his eventual career vision.

He was very proud to speak of his time in the Middle-East during the late 1960s to 1979, where he taught English as a second language to military personnel. Norm was teaching in Iran at the time of the Islamic Republic revolution. He narrowly escaped as the Persian Dynasty fell to the Grand Ayatollah. He permanently returned to San Francisco in January 1979 where he established his full-time career as property owner and landlord. 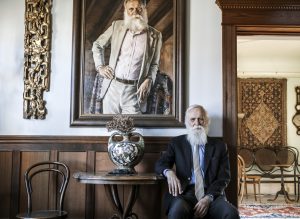 the decision to buy his first building in The Haight, in 1973, Norm recently reflected, “The Haight-Ashbury was at its low point, in the aftermath of the ‘60s, and prices were very low. My only connection with The Haight at that point was that I liked Janis Joplin. Soon after buying that first building, I did grow a beard, and have had one ever since.” Norm’s personality would become infused into the culture of the neighborhood. If you were fortunate to walk down Haight Street with Norm you couldn’t help but feel like royalty as he was heralded with multiple hellos, good wishes, and of course many lingering eye-to-eye robust conversations. As one inspired friend stated recently, “Norm is truly the Duke of the Haight.”

Norm moved into his home, the Doolan-Larson Residence and Storefronts,  at the corner of Haight and Ashbury in 1985, five years after he had purchased the building. “I had had reservations about street noise,” he later recalled, “[but] with all the possibilities that the residence had, I finally decided I had to live there and restore it, and deal with life on Haight St. I’m now…taken as authentic Hippie, and I’ve given up trying to correct people’s misimpression.” His vision for what The Haight could become would be modeled by his unwavering commitment to preservation of the building, which was designated San Francisco Landmark #253 in 2006 and listed in the National Register of Historic Places in 2011. 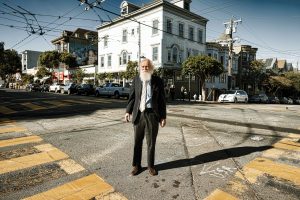 an extraordinary gift to Heritage and San Francisco, Norm donated the Doolan-Larson Building to Heritage in order to preserve the rich history for others to experience for years to come. He first became a Heritage supporter in 1985, and proudly graced the cover of Heritage News in 2017 for a special issue celebrating the 50th anniversary of the Summer of Love.  Norm was passionate about many things, however, and the great love of his life was music. His devotion to the San Francisco Opera, the Symphony, and the Philharmonia Baroque Orchestra was long standing.