San Francisco Heritage is committed to the health and safety of our visitors, supporters, staff, and volunteers. Read below for the latest on how we are adapting our programs during the pandemic:

Mark your calendars for these upcoming events!

Heritage in the Neighborhoods – Visitacion Valley
When: Throughout October 2021 – Stay tuned! 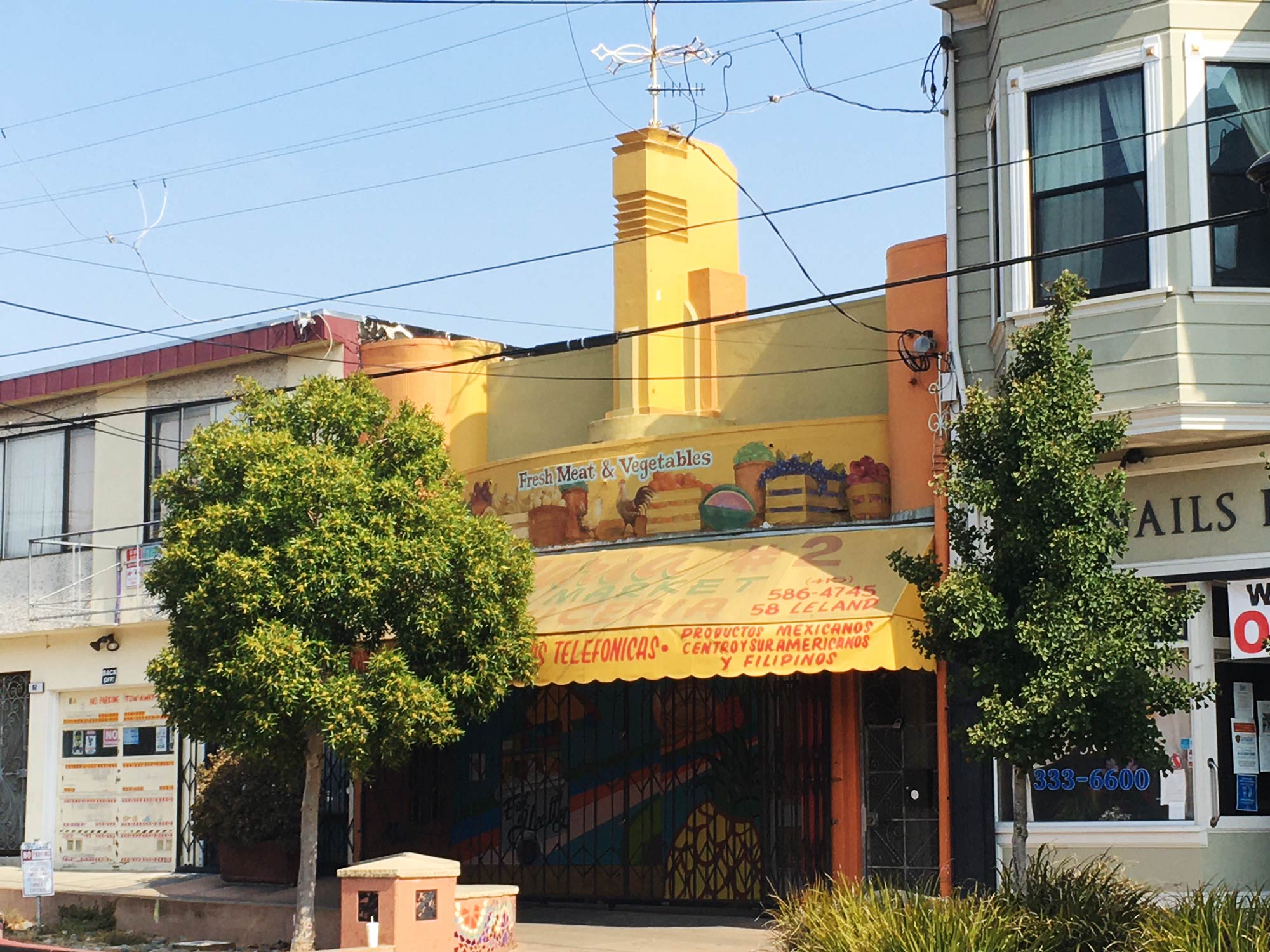 In 2020 San Francisco Heritage launched “Heritage in the Neighborhoods,” an original program to amplify the power of local communities to share what’s special about their area, while building awareness for preservation across San Francisco. This year we are spotlighting Visitacion Valley, which will happen in collaboration with the Visitacion Valley History Project during the month of October. Throughout the month there will be weekday posts spotlighting existing research on neighborhood history and architecture and longtime cultural and commercial cornerstones, as well as short videos featuring some of our neighbors, the opportunity to join several Saturday walking tours, and more.  Stay tuned for additional information! 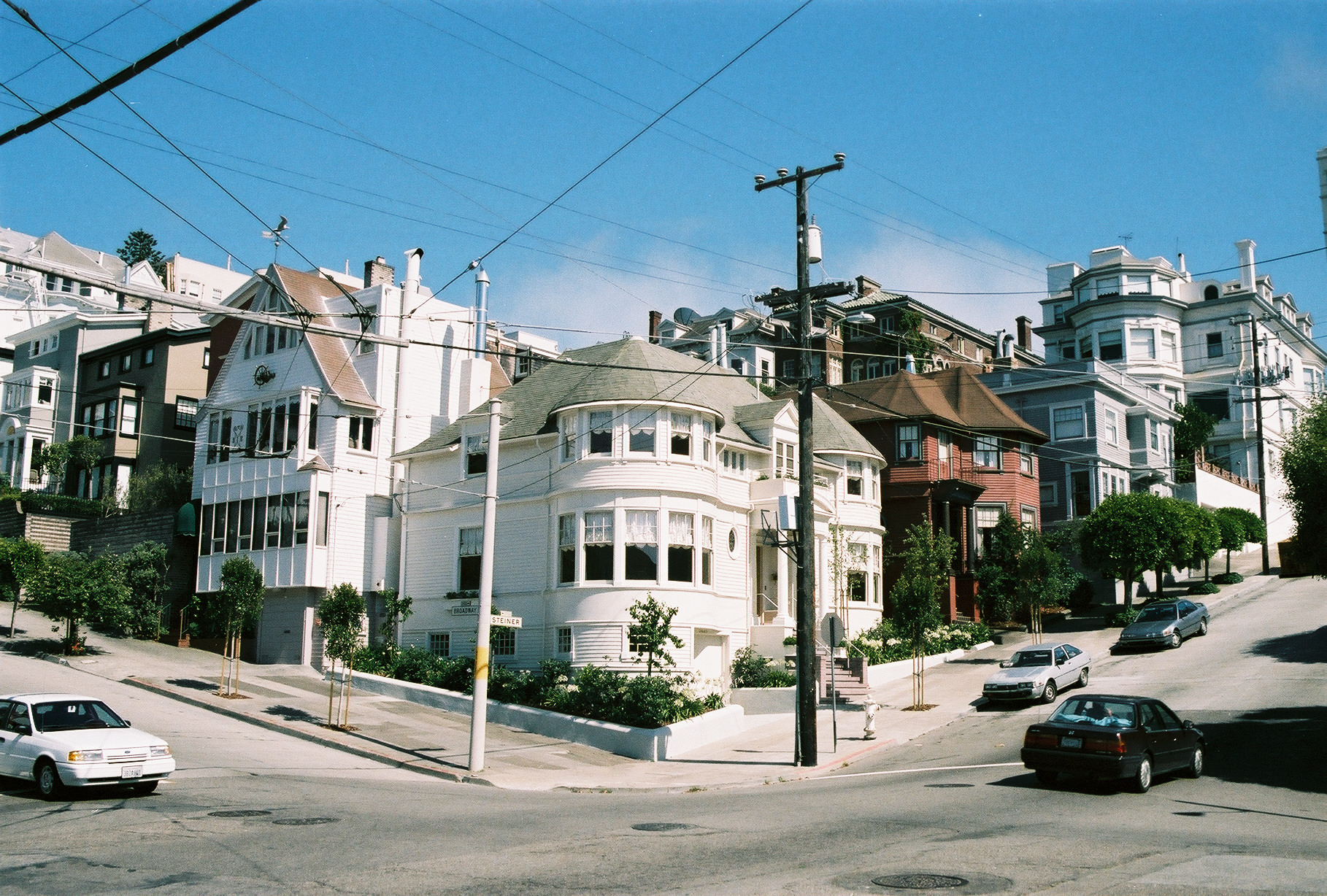 Please see the WALKING TOURS page on the Haas-Lilienthal House website for details on how to join.

Past Events and Recordings 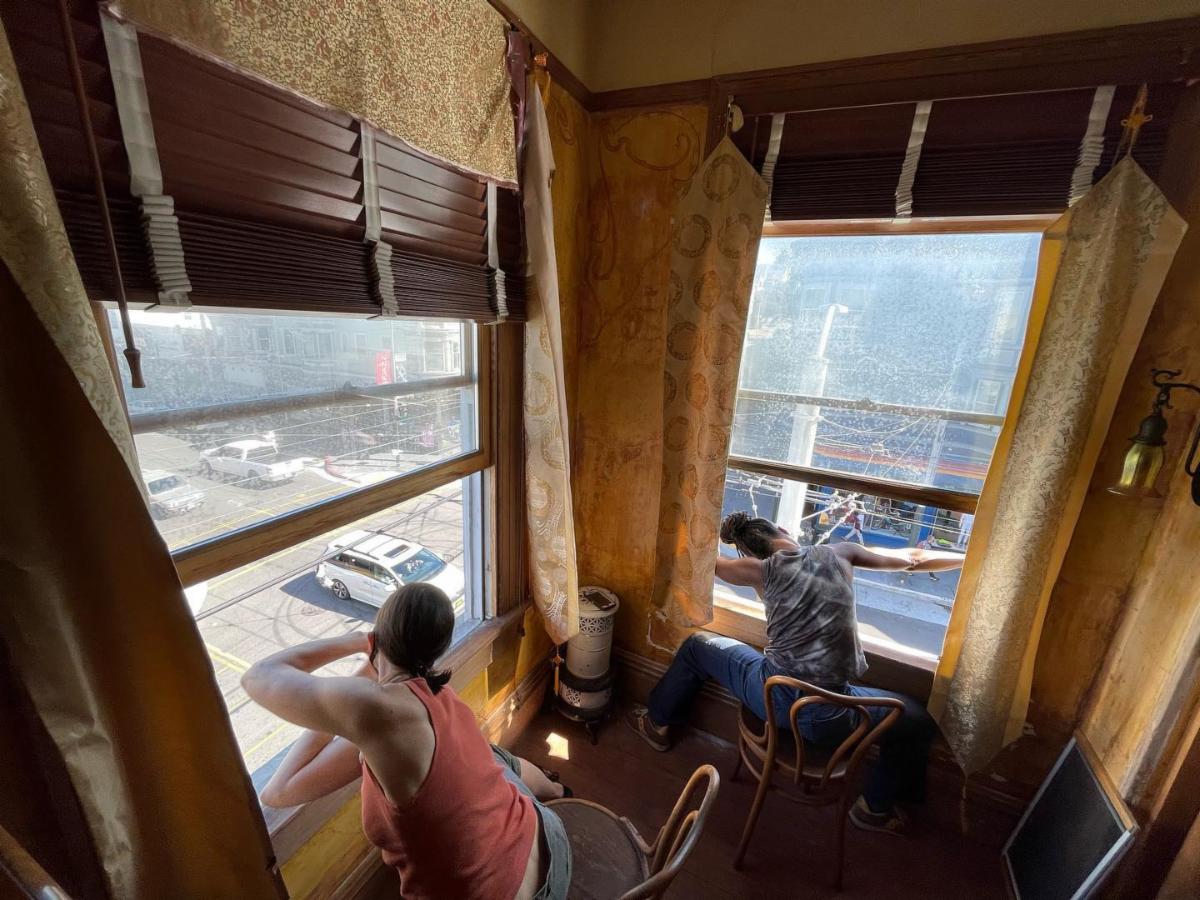 As Time of Change is a site-specific work, attendees will receive special instructions on their uniquely designed route and can select a route depending on their individual needs. 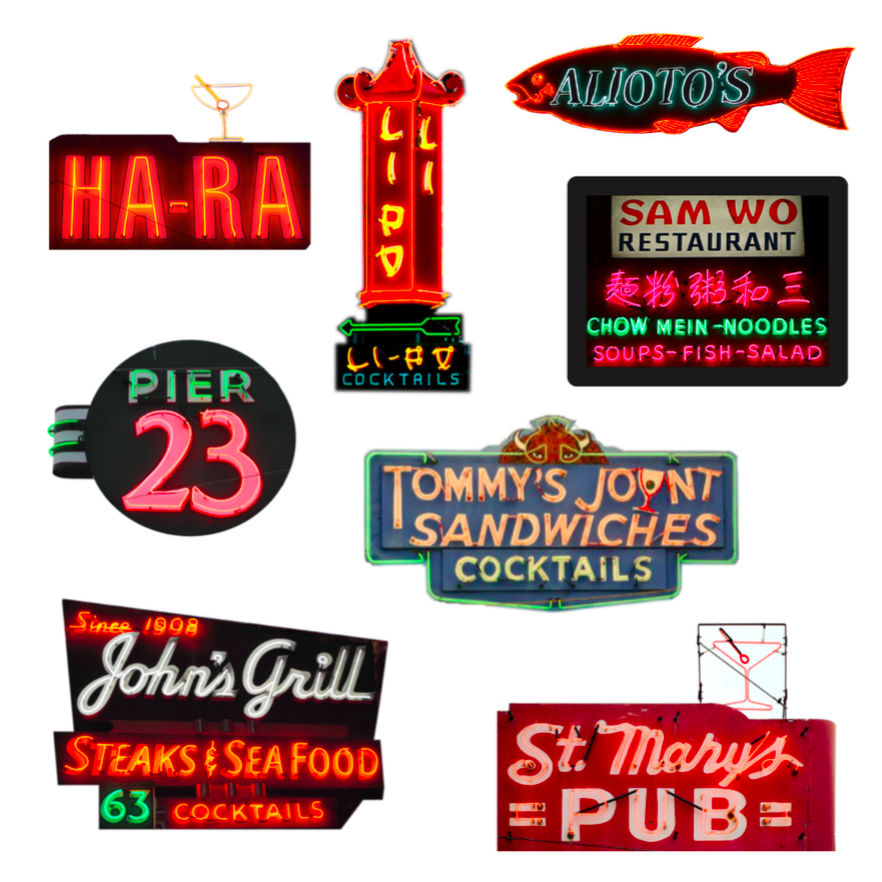 Now more than ever, many of the legacy businesses that are part of a city’s cultural richness face an uncertain future. Woody LaBounty and Kerri Young of SF Heritage will give us the big picture on the organization’s efforts to protect and preserve legacy businesses in San Francisco. Ben Leech of Preservation Action Council San Jose will preview of their sign preservation projects and recent publication, a self-guided walking tour of legacy businesses with vintage signs in downtown San Jose.

About Neon Speaks: The Neon Speaks Festival & Symposium 2021 brings together neon sign makers, artists, and preservationists to celebrate and share the future of neon. It is produced by San Francisco Neon in proud partnership with the Tenderloin Museum and the Museum of Neon Art.

Living in the Past:
An artist residency project with Jeremy Fish
Ran until: June 6, 2021
Location: 215 Haight Street, San Francisco, CA 94102

At the end of 2020, San Francisco visual artist Jeremy Fish completed a three-month residency at Heritage’s Doolan-Larson Residence and Storefronts, a National Treasure and city landmark at the corner of Haight and Ashbury. The residency and exhibition, Living in the Past, is supported by San Francisco Grants for the Arts program and will open on April 17 at Haight Street Art Center (215 Haight Street).

The upper Haight is at once one of San Francisco’s best-known and most troubled neighborhoods: the former epicenter of the 1960s counterculture that has since then been both a bustling commercial and residential area as well as a magnet for people experiencing addiction and homelessness. Compounding epidemics in healthcare, systemic racism, and economic inequality have made a difficult situation worse, and like many neighborhoods in San Francisco, the Upper Haight, its businesses, and residents are facing existential threats.

Fish’s artwork is a testament to the history of the Upper Haight – its most famous residents and meeting places; its architecture and character – and the stories that hover over every foot of ground there. His living at the corner of Haight and Ashbury at this moment infuses the poignancy of these images: the fear and hope we all feel now. The exhibition asks how we can best serve the people and the places that make the Haight unique, and central to San Francisco. Most of the work is for sale, both online at haightstreetart.org/livinginthepast and in person at 215 Haight St.

The Cadillac Hotel, The Loopers, & the Legacy of Affordable Housing in the Tenderloin
When: March 18 at 6:00 PM PST
Thank you to all who attended!

Heritage and the Tenderloin Museum hosted a special presentation on the history of the Cadillac Hotel, a landmarked building in the heart of the Tenderloin that pioneered a model for non-profit supportive Single Room Occupancy (SRO) housing in San Francisco, the first of its kind west of the Mississippi. Today, the Cadillac is home to approximately 160 residents as well as a handful of small neighborhood businesses and institutions, including the Tenderloin Museum.

Kerri Young, Communications and Programs Manager for SF Heritage, gave an overview of the history and architecture of the Cadillac, the storied “Newman’s” boxing gym, and the imaginative preservation work of Leroy and Kathy Looper that transformed the Cadillac into a neighborhood anchor, “The House of Welcome.” Then, Kathy Looper, the Cadillac Hotel co-founder and TLM board president, was joined by Arnie Lerner, SF Heritage’s former staff architect who worked on the Cadillac’s 1977 restoration, who discussed their experience with the Cadillac’s restoration as well as its role in the neighborhood today. 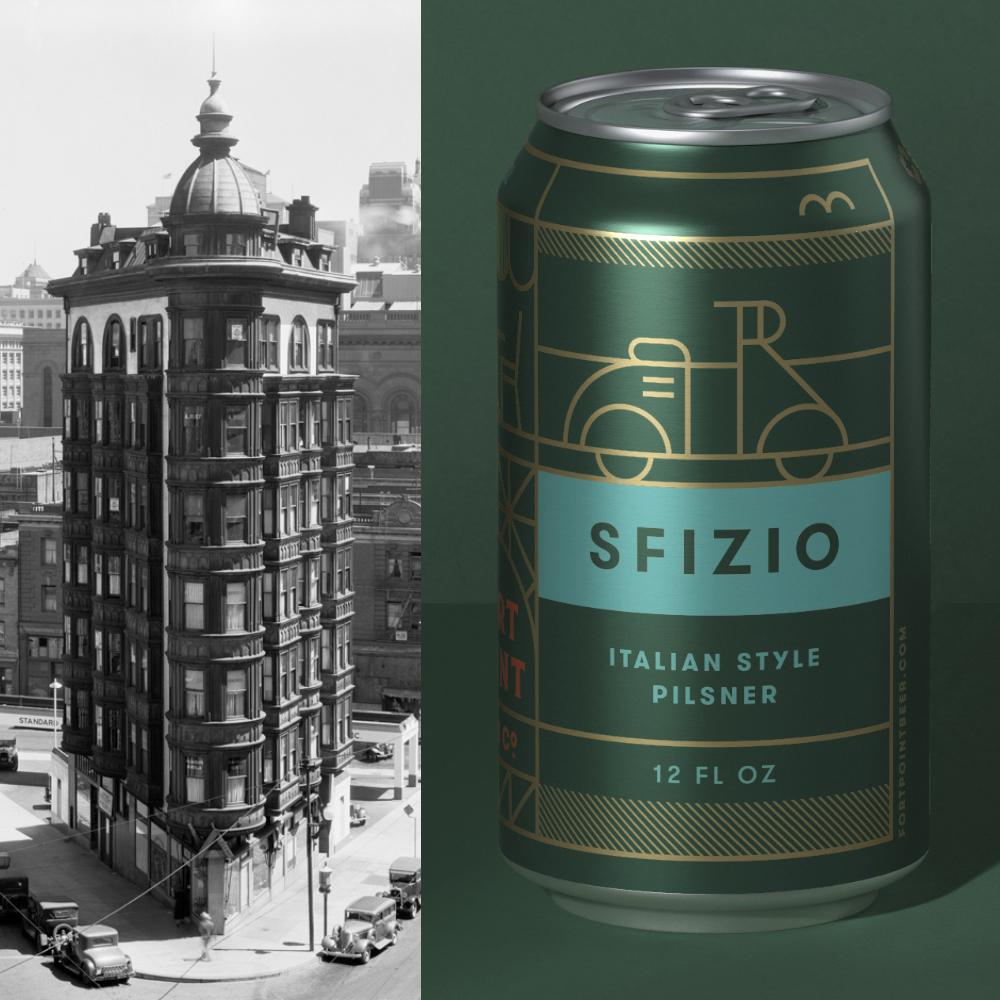 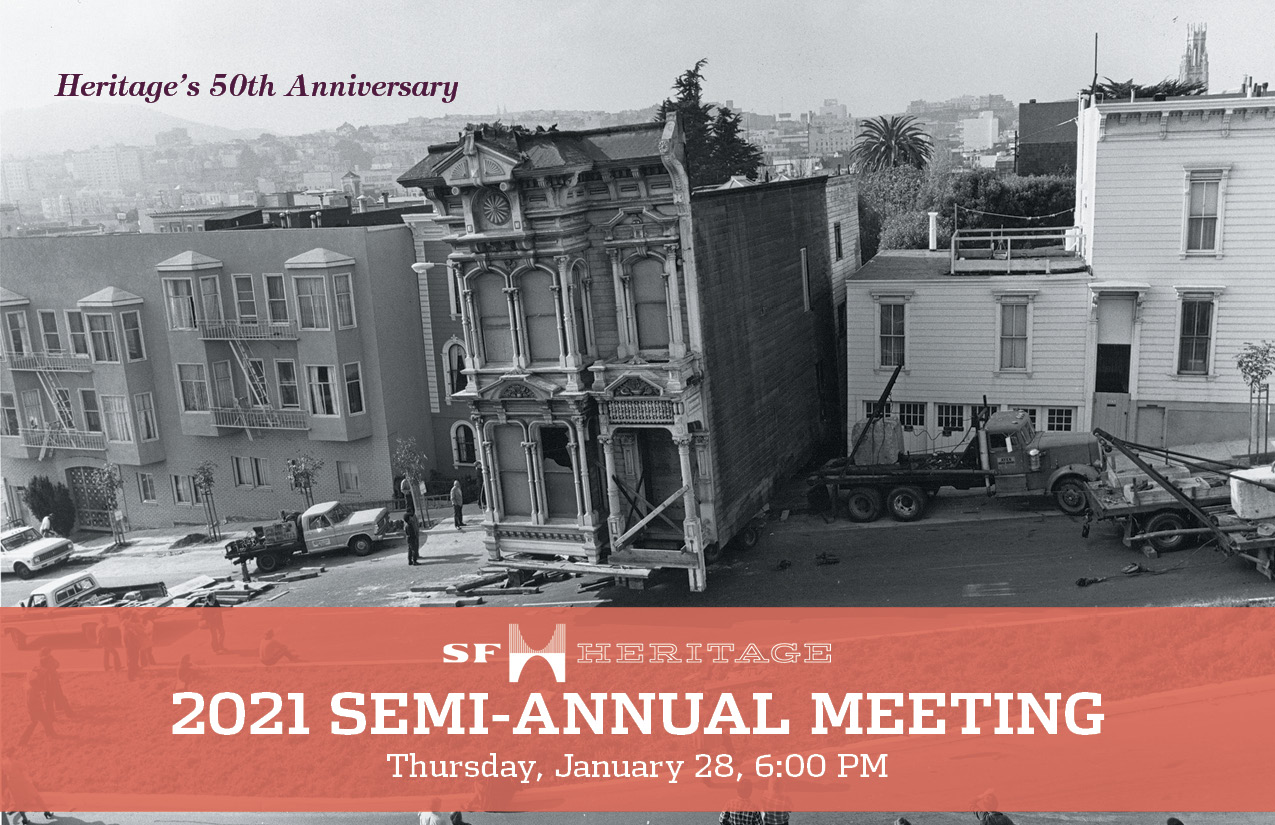 A chapter in Heritage’s 50-year history was the two-day move of this Eastlake-style house from its original location at 773 Turk street. It took two days to reach its new home at 1735 Webster Street. A drawing of the house was used as an early logo for Heritage.

Heritage’s Semi-Annual Meeting will take place later this month on January 28, 2021, at 6:00 PM. During this virtual gathering of members and supporters, we will provide an update on Heritage’s 50th anniversary activities and post-Covid-19 plans in 2021, including public-policy and advocacy priorities.

This year we are making this event free and open to the public, but please register using the button below so we know that you are coming!

We finished our 2020 lecture series on Women in Preservation by highlighting the stories of well known and lesser-known advocates of historic preservation and their work to preserve architecturally or historically significant places for future generations. Our speakers:

An impressive list of speakers will explore the intersections of racism, gender, and historic preservation at important sites in San Francisco’s Asian American community. In collaboration with Michelle Magalong, President of Asian and Pacific Islander Americans in Historic Preservation (APIAHiP) and Presidential Postdoctoral Fellow at the University of Maryland’s Historic Preservation Program. More details to come.

MC Canlas, author SoMa Pilipinas Studies 2000 in Two Languages (2002) and SoMa Pilipinas Ethnotour Guide Book (2013). MC is a member of the History and Heritage Committee and the Working Group of SoMa Pilipinas.

2020 marks the 150th anniversary of San Francisco’s Golden Gate Park, and our lecture explored one of the park’s beloved unsung heroes: Sydney Stein, who in 1929 became the first woman hired as a gardener by the City of San Francisco. Nicole Meldahl, Executive Director of the Western Neighborhoods Project, recounted some of the specific initiatives she accomplished, such as saving cyclamen from Europe immediately before World War II, and Stein’s ascendance to chief nurseryman (or should we say, nurseryWOman?) and eventually manager of the Conservatory of Flowers.

LisaRuth Elliott, project manager of the Neighborhood Newspapers of San Francisco collection of over 2,300 digitized local papers, moderated a conversation with Mary Ratcliff, longtime editor and co-owner of the San Francisco Bay View National Black Newspaper. While the country’s mainstream press is slowly catching up to the issues and concerns of the Black community, the Bay View has long given a voice to Black San Franciscans since its inception in 1976. Anchored in the Bayview-Hunter’s Point, it was first neighborhood newspaper to join the Legacy Business Registry [in 2017]. Ratcliff discussed the paper’s legacy of social justice work through community journalism, its continued outreach during the COVID-19 crisis, and her thoughts on carrying the legacy of the paper into the future.

We also heard from Griffin Jones, journalist and copyeditor, archivist for the San Francisco Bay View about the work of the Bay View Archives.

If you have any thoughts, ideas, and questions about these programs, please reach out to Kerri Young at kyoung@sfheritage.org or call 415-441-3000 x22.