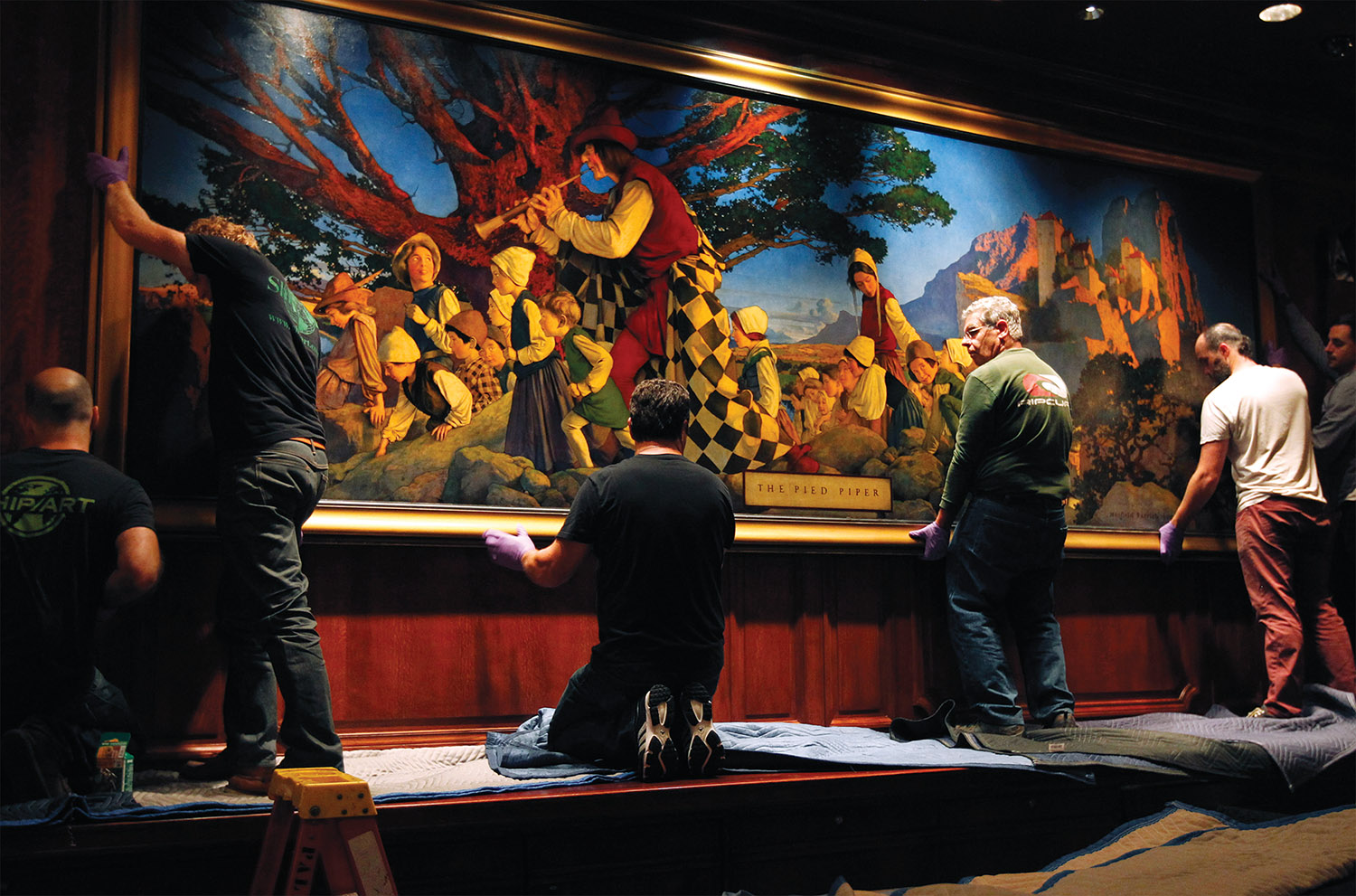 The Pied Piper of Hamelin being reinstalled in the Palace Hotel, August 22, 2013. (Paul Chinn/San Francisco Chronicle/Polaris.)

At a champagne celebration befitting a local icon, Maxfield Parrish’s famed painting The Pied Piper of Hamelin was unveiled to a laudatory crowd on Thursday, August 22 [2013]—a true victory for San Francisco after months of uncertainty over the artwork’s future. The magnificently restored painting has been remounted in its original location above the bar at the Pied Piper Bar & Grill, where it is once again accessible to adoring patrons.

The Pied Piper was commissioned for $6,000 in the aftermath of the 1906 Great Earthquake and Fire and made its debut with the grand reopening of the Palace Hotel in 1909. The 16-foot-long painting is one of only two Maxfield Parrish barroom artworks in the country and the only one to remain in its original location. Its counterpart, Old King Cole, is displayed above the bar at the St. Regis Hotel in Manhattan. Dating from the “Golden Age of American Illustration,” Parrish and contemporaries Dean Cornwell and Norman Rockwell together produced numerous examples of fine art intended to enliven drinking establishments throughout the country. Longtime San Francisco Chronicle columnist Herb Caen, whose signature martini is still served at the bar, revered the Pied Piper and its “beloved” painting.

The Palace Hotel’s revelation on March 22, 2013 that The Pied Piper had been removed for sale at a fine arts auction in New York mobilized Heritage and a coalition of individuals, nonprofits, city officials, and members of the media in protest. In response to the public outcry, including a social media campaign and online petition that garnered 1,200 signatures in less than two days, the hotel quickly reversed its decision to sell the painting, but did not immediately disclose where it would be displayed at the hotel. Having featured the Pied Piper Bar & Grill in the first round of Legacy Bars & Restaurants in early 2013, Heritage continued to appeal to the hotel’s management to reinstall the painting in its original location. On August 7, 2013, the Palace announced that the painting would indeed return to its namesake bar, ending speculation that it would be relocated within the hotel. 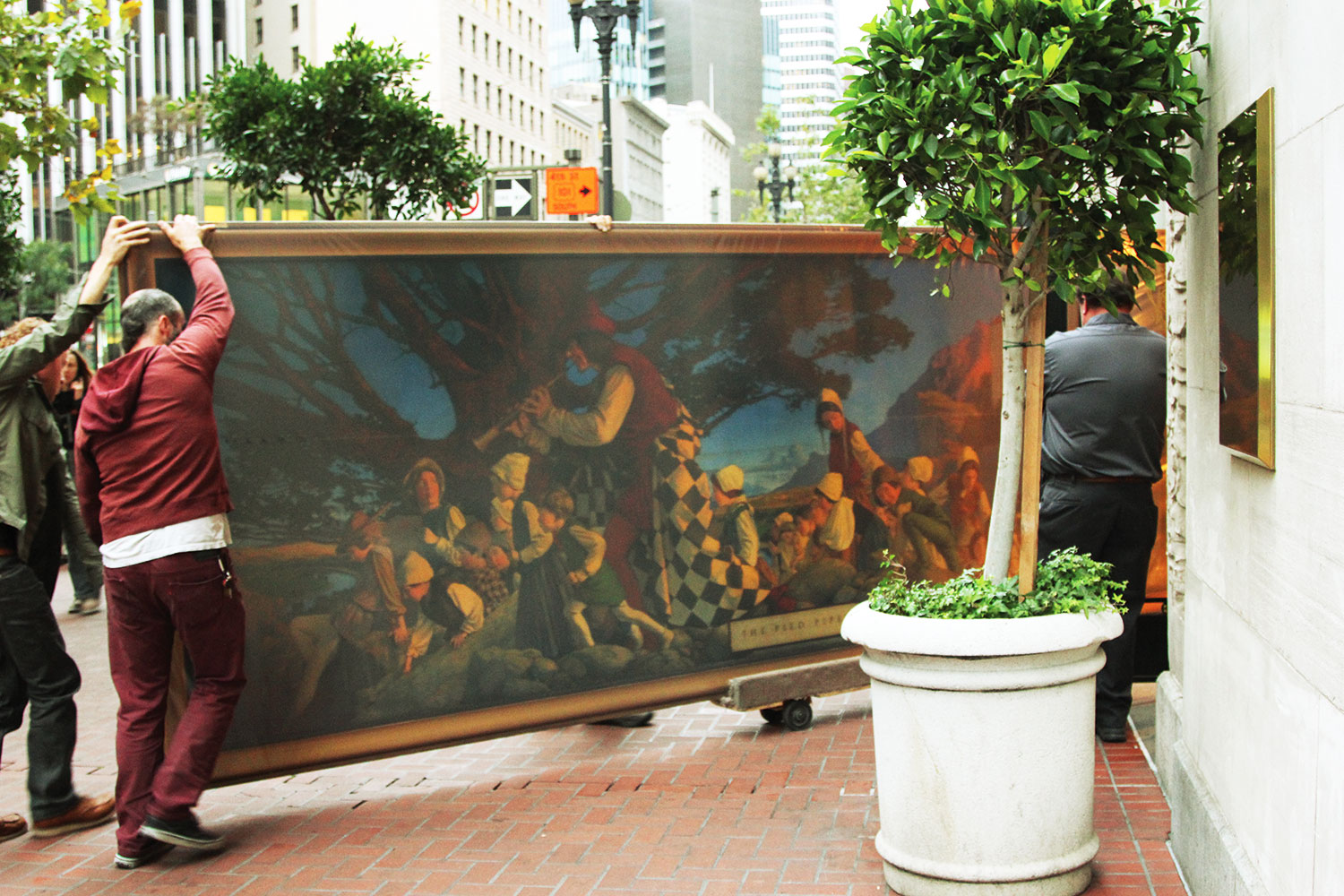 The Pied Piper of Hamelin returning to the Palace Hotel, August 22, 2013. (Palace Hotel.)

The Pied Piper returned to San Francisco just hours before the unveiling, having undergone a painstaking restoration in New York by Rustin Levenson Art Conservation Associates. The firm benefited from previous experience with Parrish’s work, performing the 2007 restoration of Old King Cole. After conducting solubility testing and UV examination of The Pied Piper’s condition, conservators removed “a thick accumulation of superficial grime” from exposure to smoke, liquids, and other environmental elements for over a century. Unlike Old King Cole, which had seen myriad conservation treatments, The Pied Piper had likely received only surface cleaning since its creation. Conservators marveled at its remarkably original condition and reveled in the “privilege” to study Parrish’s techniques in a largely unaltered setting.

Rustin Levenson made several fascinating discoveries while performing the restoration. Tests revealed that Parrish applied refined white shellac between layers of paint, the first documented usage of this material in his work. According to Harriet Irgang Alden, Director and Senior Paintings Conservator, Parrish’s application of shellac and other resins between layers of paint enabled him to achieve unparalleled saturation of color due to the materials’ transparency. 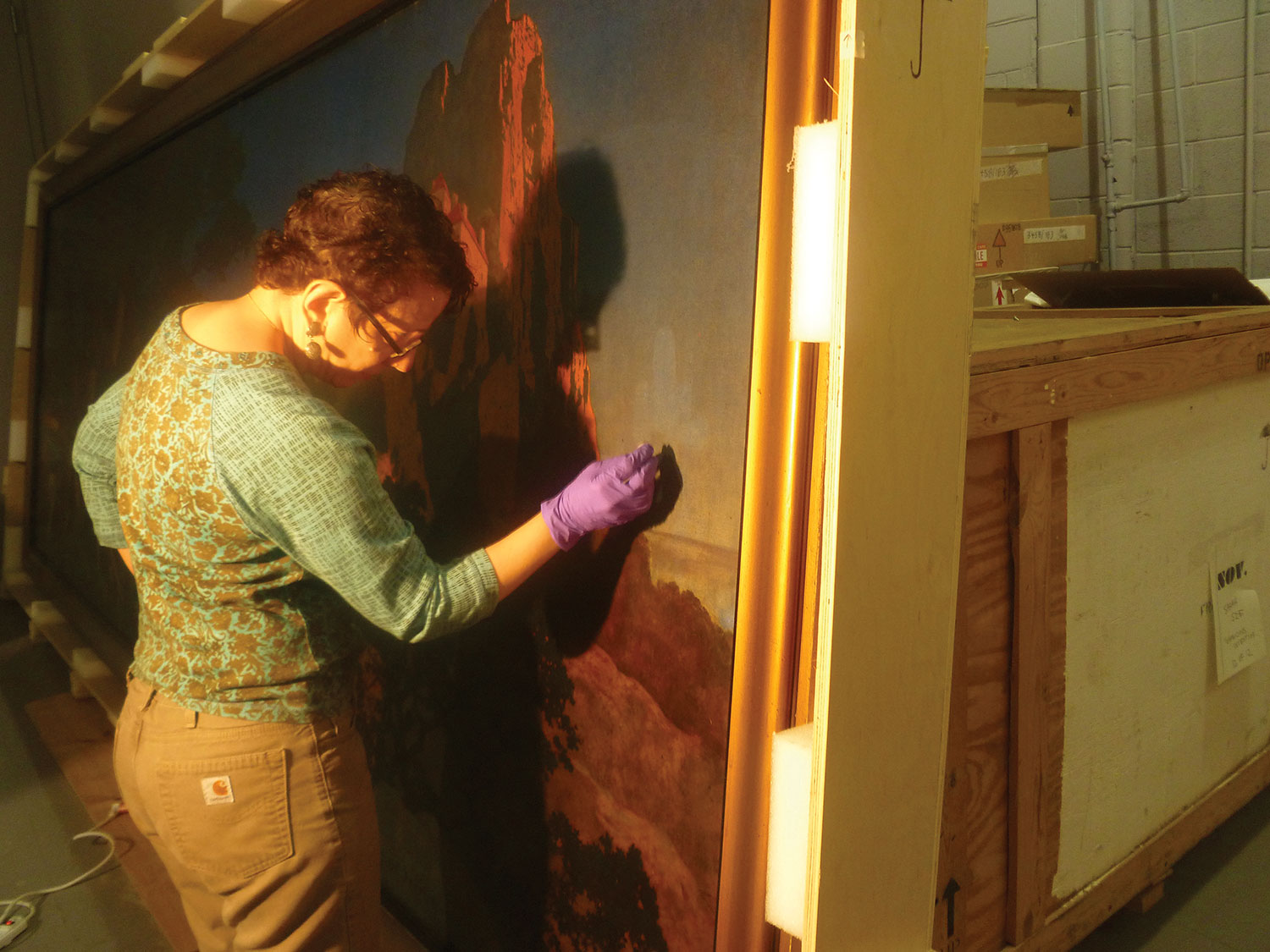 Director Harriet Irgang Alden removes grime from the painting’s surface. Conservators marveled at its “pristine condition” after more than a century of residing in a bar. (Rustin Levenson Art Conservation Associates.)

The removal of grime revealed a layer of aging resin, which had diluted the painting’s vivid colors over time. Irgang Alden estimates that the resin, an oil-modified alkyd, was applied in the mid-20th century by non-conservators in a well-intentioned effort to protect the painting. Conventionally employed to treat boats and decks, the resin came into popular use after the painting’s completion and has never been in common use for fine arts conservation. The amber patina acquired over several decades from the resin has given The Pied Piper its golden hue. After further testing, conservators elected not to remove the patina in order to preserve the original varnish, opting instead to apply a new protective varnish to unify the texture and saturate the “jewel-like” colors. Though fully reversible, this varnish was selected for its excellent aging properties, vibrantly
illuminating Parrish’s signature colors and intricate brushwork. Details long-obscured by grime are now evident, such as buildings on the mountains and the expressions on children’s faces.

“The opportunity to treat a painting in such pristine condition is both a relief and a great privilege,” said Irgang Alden. “Having previously conserved Old King Cole, I was honored to have such intimate contact with another of Parrish’s masterworks.”

In addition to commissioning the restoration, the Palace reinstalled the painting several inches higher on the wall to provide maximum separation from the liquor bottles below. The hotel is proudly celebrating the homecoming with a series of Pied Piper-themed offerings, including a “Spend the Night with The Pied Piper” guest package and a hand-blown glass Pied Piper Holiday ornament. The Palace is also producing a mini-documentary on the restoration and return of the painting that will run continuously on the hotel’s in-room television channel.

“As an iconic hotel, it is important that we capture the monumental events in the life of the Palace,” said Christophe Thomas, General Manager of the Palace. “The restoration of The Pied Piper of Hamelin is a very important part of our history. By creating this captivating short film, we document the moments of our legendary hotel and the renowned Pied Piper painting. We are now able to share the unforgettable experience with our guests for years to come.”

The return of The Pied Piper is a triumph for the city’s cultural legacy. Heritage applauds the Palace’s ownership for listening to the overwhelming public plea for its safe return, restoring an indelible piece of San Francisco’s cultural identity.

(After being closed during the COVID-19 pandemic, The Pied Piper Bar and Grill reopened on July 15, 2021.) 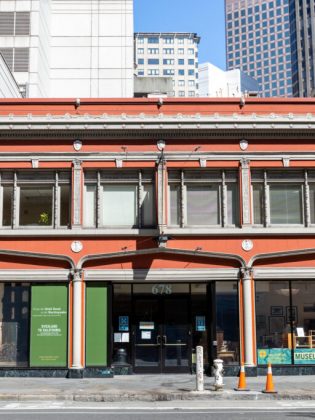 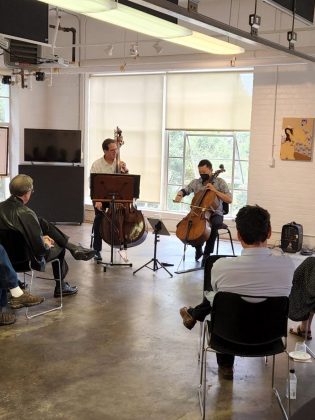