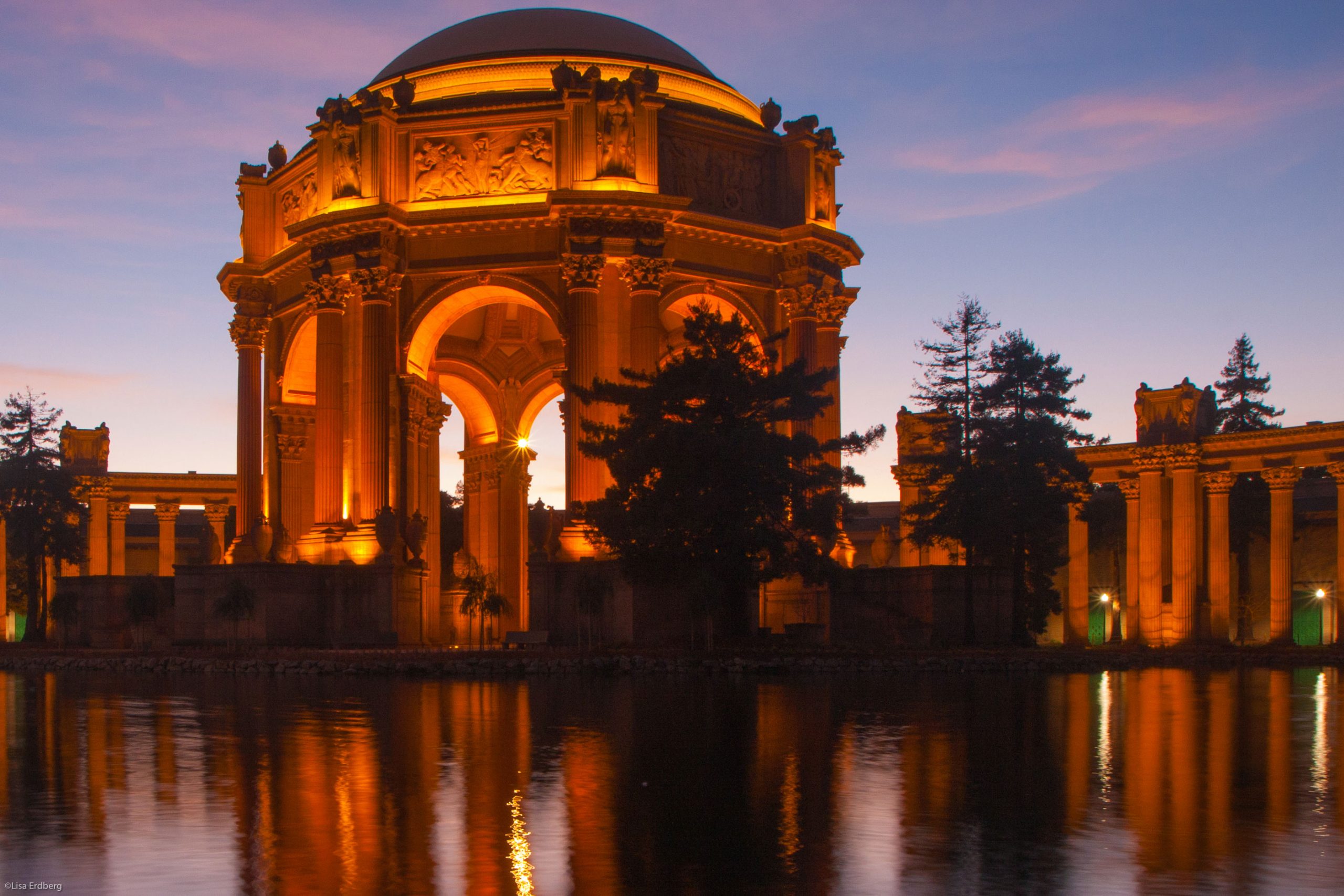 “After the little, breathless shock that follows the first vision of perfect loveliness, half the world and his wife looking across the Fine Arts Lagoon in San Francisco, ask: ‘Who did it? Where did he get his inspiration? Why have we had to come here to see the most divinely beautiful building ever reared in America?'”1

This was how Frank Morton Todd opened his introduction to a slim volume in honor of the Palace of Fine Arts published during the 1915 Panama-Pacific International Exposition (PPIE). Within the work are answers to the questions of Mr. Half-the-World (and his wife), questions that some people may have today about the landmark on the western edge of the Marina District.

Bernard Maybeck, perhaps the most celebrated of architects associated with the Bay Area, created the Palace of Fine Arts. Conceived and constructed for the PPIE, it is considered Maybeck’s masterpiece, heralded for its transcendent and melancholy beauty.

A rotunda with flanking arced colonnades stands beside a tranquil lagoon like a glorious ruin from an undefined classical age. Mystical, almost unapproachable, this is material poetry, Ozmandias embodied, an eternal story. One expects to glimpse a naiad from a Maxfield Parrish painting reclining against one of the columns. Illuminated at night, Todd thought “its frosty and unattainable perfection [was] as moving as a glimpse of the Infinite.”2 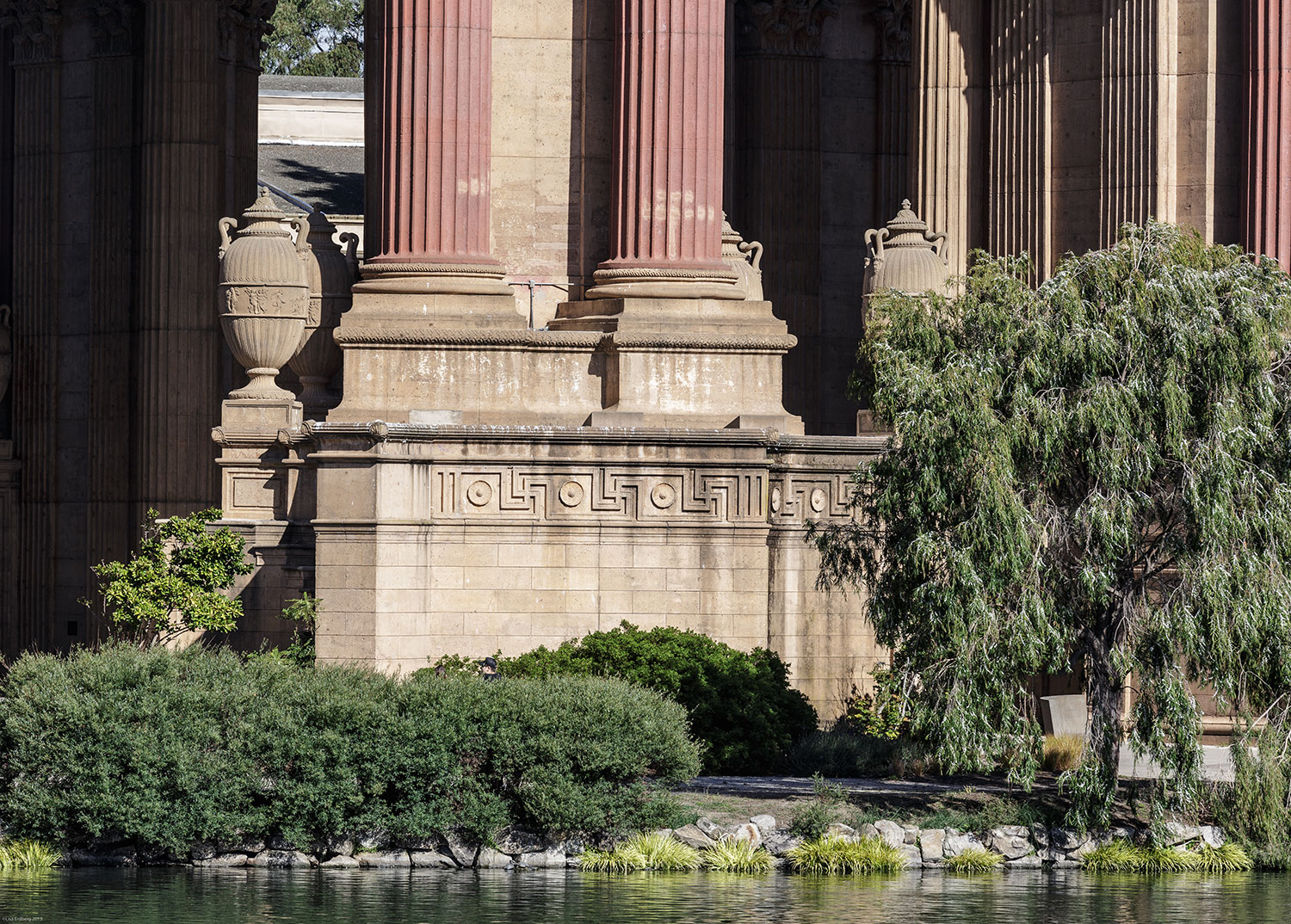 Detail of Palace of Fine Arts rotunda base at lagoon. (Lisa Erdberg photograph.)

Maybeck’s inspiration sprung from the pedestrian requirements of his commission. This section of the PPIE was reserved for the display of artistic works. The Director of the Division of Fine Arts asked for some transition from the exciting diversions of the fair so that visitors were adequately prepared for contemplation and appreciation of the paintings and sculptures. With this in mind, and based on his own impression that visiting an art gallery “was a sad and serious matter,” Maybeck decided his design should elicit a “sentiment in a minor key.”3

Maybeck used the techniques, orders, and motifs of classical architecture as a starting point and then stretched them to a fantasy. The colonnades have columns of different heights and originally some were painted a light green. Massive Corinthian columns support planter boxes that look like elevated ossuaries, each mourned by sculpted “weeping women.” 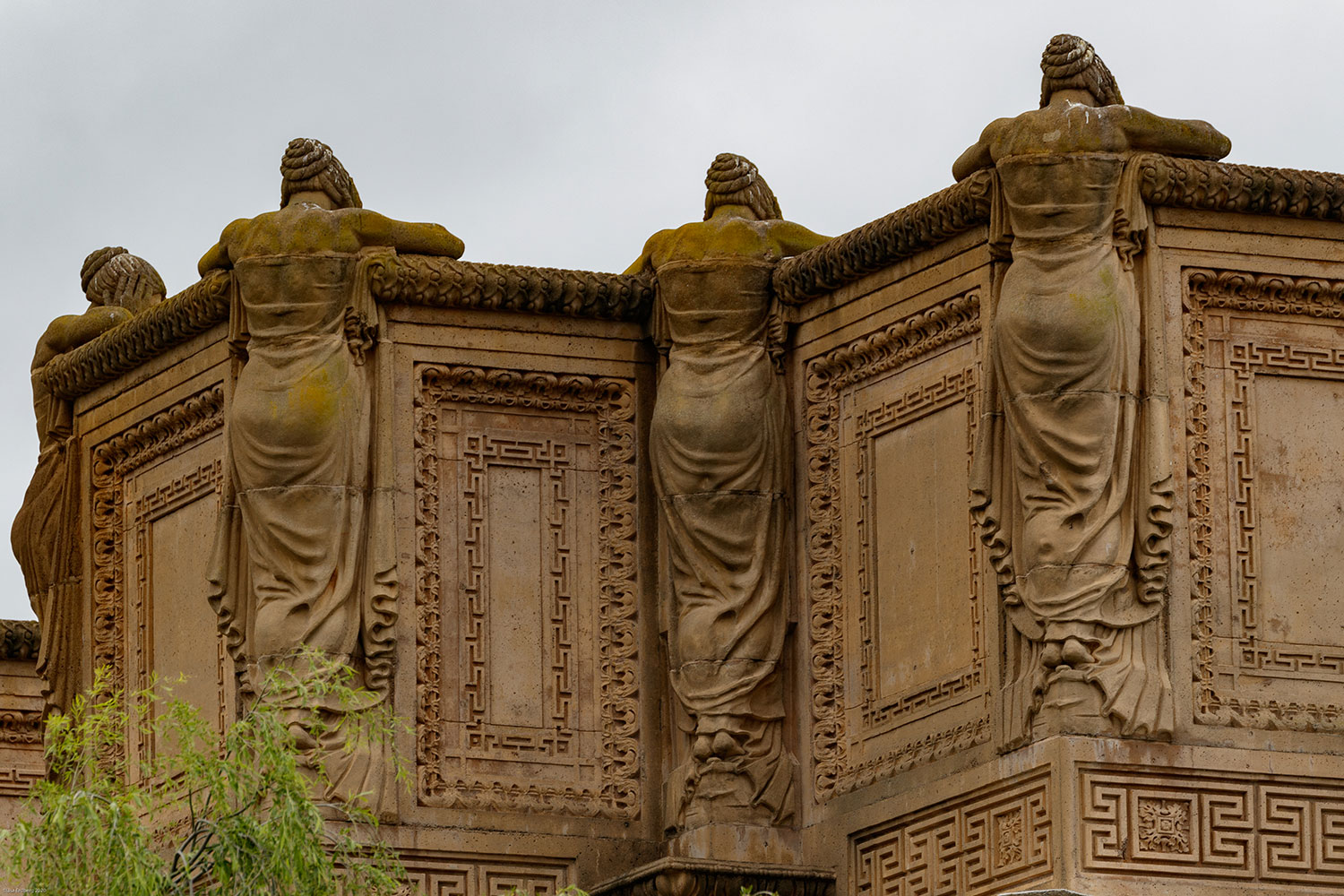 Palace of Fine Arts “weeping women” around what Maybeck planned as planter boxes, although they never were used as such. (Lisa Erdberg photograph.)

Screened by the musical composition of rotunda, colonnades, and lagoon landscape, the curving exhibition hall was originally far more ornate with piers, columns, and a pergola on the rooftop. Unlike the rest of the buildings of the fair, it was constructed of permanent materials, concrete and steel, to assure the artwork within was protected.

A movement to preserve Maybeck’s creation began during the PPIE. Willis Polk, original chair of the exposition’s architectural council, made the case simply: “In all the ages was never a more beautiful building.”4

On October 16, 1915, exposition management set aside 75 percent of the day’s receipts to support the Palace’s preservation and the San Francisco Examiner staged a campaign to raise more. A deal was arranged with the federal government to acquire the land (which was part of the Presidio), and when the fair was razed to the ground in 1916, the Palace remained. 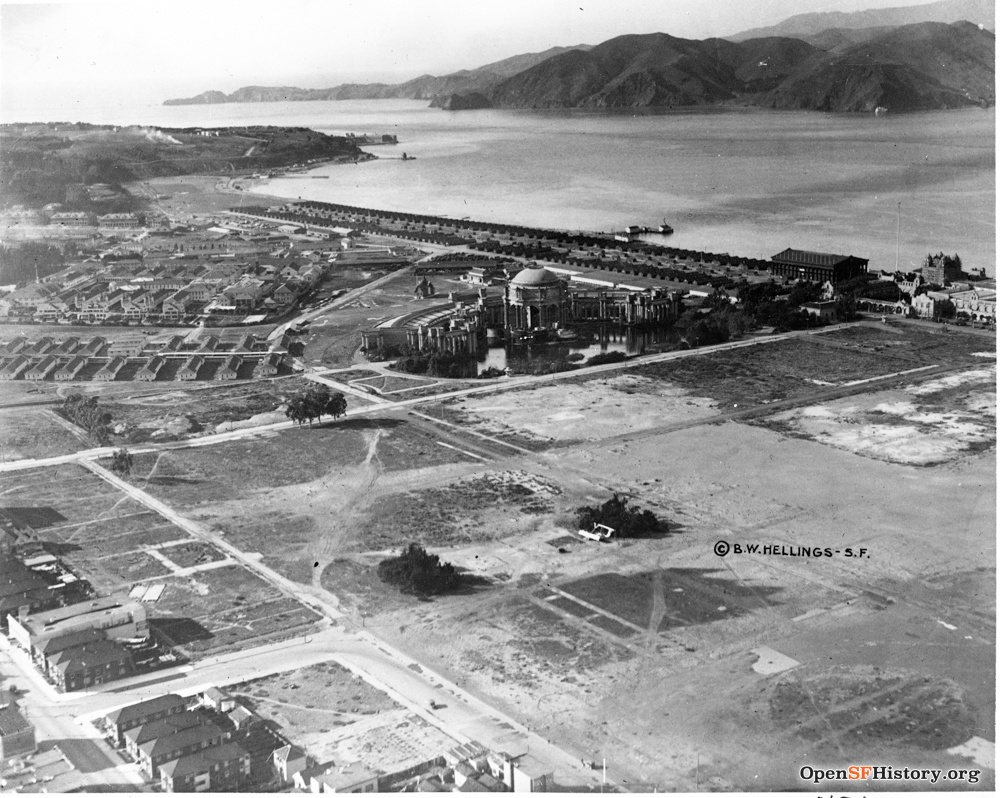 But the Palace of Fine Arts was intended to be ephemeral, built to last the one-year run of the fair. While the fine arts exposition hall possessed a steel frame, the rotunda and colonnades were constructed of a soft plaster-fiber material laid over wood framing. Maybeck’s imagined ruin quickly started to resemble one in fact. Repairs, patchwork, and painting were done periodically, but by the early 1960s, the palace was severely deteriorated. 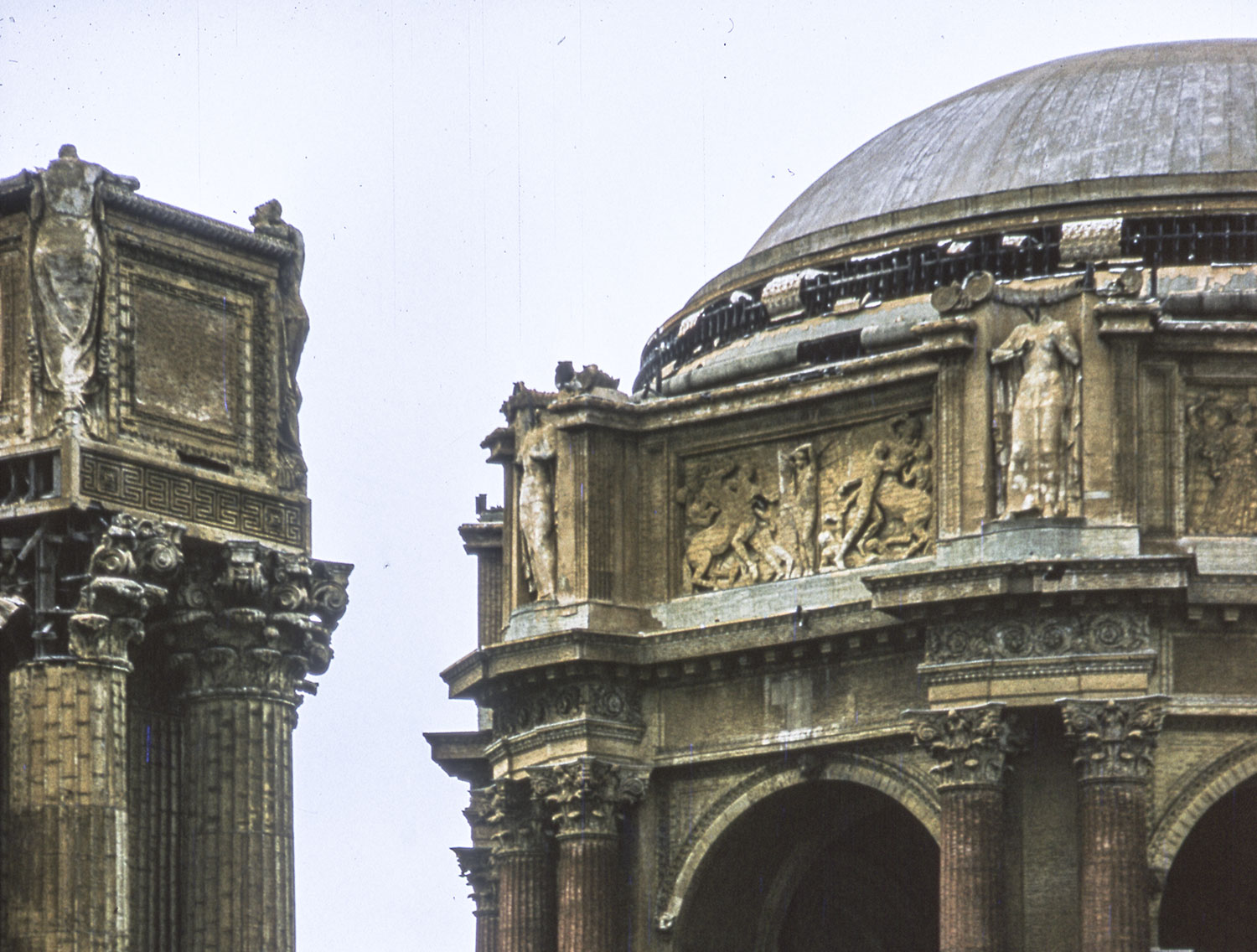 Detail of a circa 1960 slide showing deterioration of the Palace of Fine Arts. (OpenSFHistory/wnp25.4200)

After some failed bond measures, private donors and the city pulled together enough money to save the Palace. Not everyone was onboard. One newspaper columnist, quoting critics, called the effort “trying to convert a dinosaur into a French poodle by plastic surgery.”5 Rather than restoration, the project was actually reconstruction, with most of Maybeck’s creation completely demolished in 1963. From molds taken, the rotunda and colonnades were rebuilt in precast masonry with steel frames. Budget constraints eliminated much of the original exterior detailing, especially of the exhibition hall, which is far more utilitarian in appearance now.

The Palace makes for an interesting case in the field of preservation. The site was added to the National Register of Historic Places in 2005, even without the original material of Maybeck’s 1915 creation. The nomination was for the reconstructed group as “a pioneering effort that represented powerful changes in public attitudes in San Francisco and around the country.”6 Significance of the site rested as much in the idea of conserving the Palace as in Maybeck’s vision. Columbia University professor Theodore Prudon noted it as an unusual case where “…the symbolic value is often very important while authenticity is not.”7

In the early 2000s, forty years after its construction, the new Palace of Fine Arts needed its own restoration. Lagoon edges were crumbling and pieces of ornament flaking off the rotunda dome. The Maybeck Foundation and the City of San Francisco needed to raise $21 million for the work.

As in the 1960s, finding money was a challenge, but this time the idea of protecting and preserving what is one of San Francisco’s most iconic sites was never in doubt. Restoration was completed in 2009. 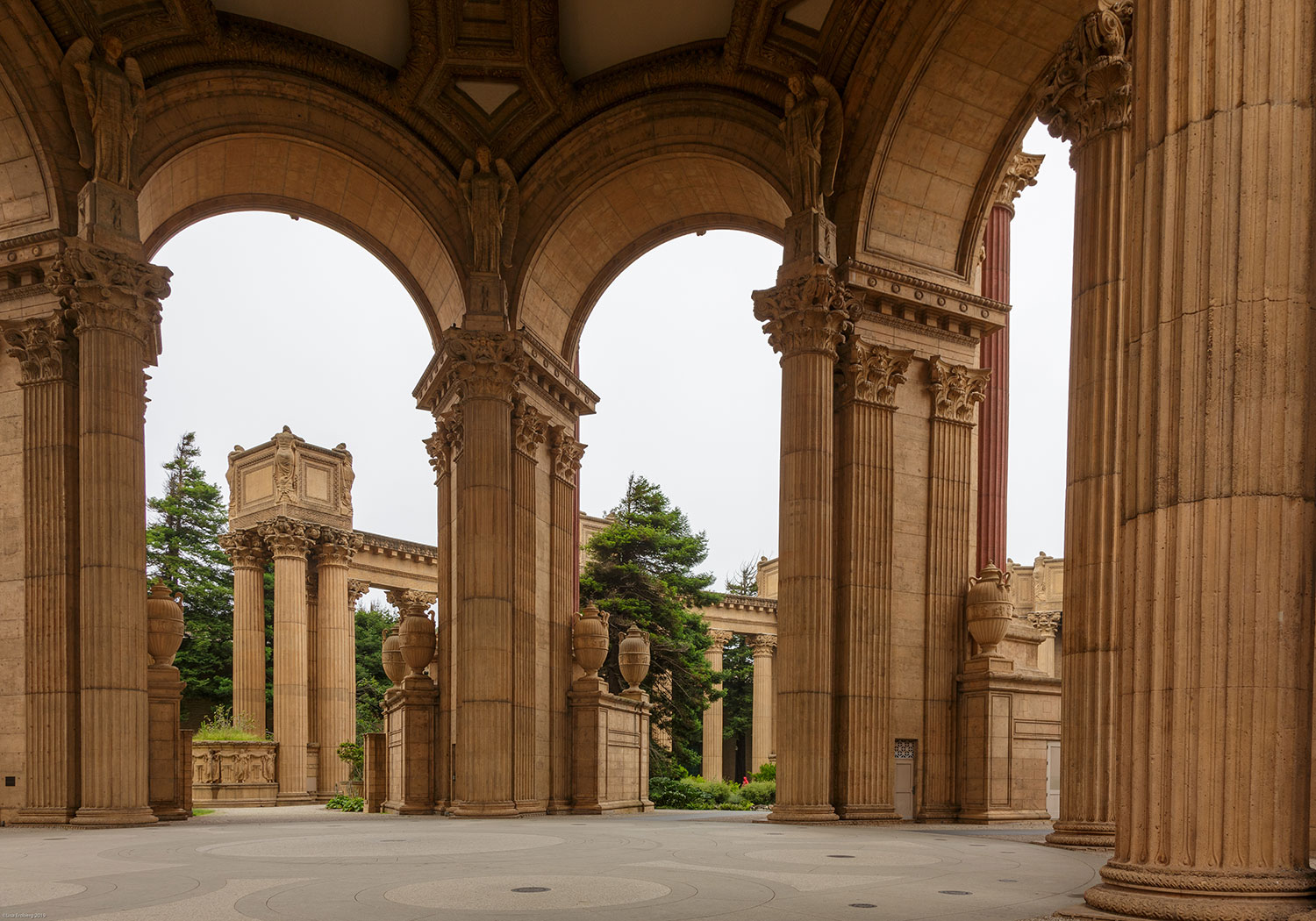 View through the rotunda of the Palace of Fine Arts. (Lisa Erdberg photograph.)

Tags
Heritage in the NeighborhoodsLandmarkMarina